Double Marker: A Gay Jew in the Navy 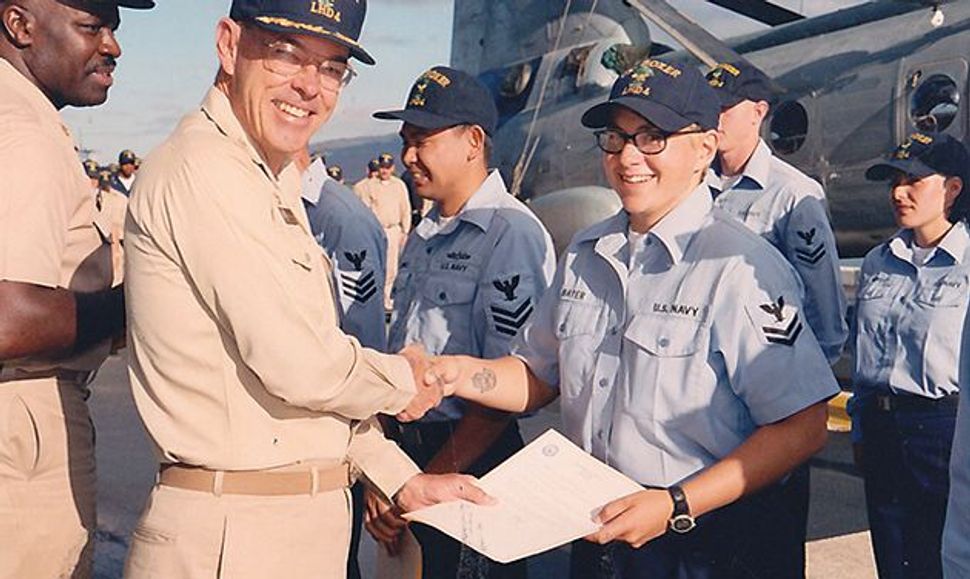 Ship Shape: Korrie Xavier, in Navy blues, gets a handshake and a promotion from her commanding officer on the USS Boxer in 2000. Image by Courtesy of Korrie Xavier

Will the law allow return, Korrie Xavier wonders, for gay former military service members like her, who left the service only because they had to?

Just five years after her bat mitzvah, Xavier joined the Navy as a seaman recruit. She was trained to maintain and fire weapons systems on the USS Boxer, an amphibious assault ship based in San Diego. She liked the structure, the camaraderie, and sailing to ports from southeast Asia to Abu Dhabi. Barely in her 20s, the Michigan native became the nerve center of Jewish shipboard life — all while hiding her sexuality under her Navy uniform blues.

“I loved being out to sea — in the middle of the night, when you’d hang off the fantail, and just listen to the water. It was incredibly calming, and you could see all the stars in the world,” she said. And she loved that it was possible to feel alone in a floating village of 3,000 people.

But the stress of lying wore on her, and four years into a six-year commitment, she wrote a letter to her captain: “For the last few years, I’ve been willing to compromise myself.… I realize now that there is no honor or pride in serving an institution that is so obviously ashamed of me.” Within months she was discharged, as the Don’t Ask, Don’t Tell law required for service members who acknowledged their homosexuality.

As Xavier, 32, reflects on the decade between her exit from the Navy in early 2001 and the new law’s signing on December 22, she prepares to visit her sister, who pursued another law of return and lives in a settlement outside Jerusalem with her husband and new baby.

“It was certainly easier having being Jewish as what kept me different, rather than being queer,” she told the Forward as the DADT law was set to change. Authorities like the Servicemembers Legal Defense Network expect that gay former service members, who have been prohibited from re-enlisting in any branch of the military, will soon be allowed to do so if they’re otherwise eligible. In light of these changes, Xavier’s experience has a special poignancy and provides a window into a time when being both gay and Jewish in the military was a double marker of difference.

It’s estimated that there are about 10,000 Jews serving in the active duty military. As one of them, Xavier served as Jewish lay leader on her ship, running Shabbat services — sometimes for herself alone, sometimes with two or three others — holiday observances, and the like.

“It was in boot camp that I really appreciated Shabbos,” said Xavier of her initial days as a recruit at Naval Station Great Lakes in Illinois at the end of 1996. “You didn’t know which way was up six days a week. But on Shabbos I got to go to shul and relax.”

These days Xavier is looking forward to receiving her bachelor’s degree in sociology from Wellesley College. She lives in the Boston area with her wife of two years, who is a doctor of psychology. Though her wife is not Jewish, the couple was married by a rabbi in a Jewish ceremony, and Xavier (née Bayer) identifies as an “agnostic Jew.” As a child of intermarriage — her mother used to be Lutheran and her father is Jewish — she galvanized her family to attend Congregation Shir Tikvah in Troy, Mich., when she was young. She studied Hebrew, had a bat mitzvah one year late, and her sister and mother eventually had a joint bat mitzvah at ages 26 and 52, respectively.

Although Xavier’s family and schoolmates had guessed she was gay since girlhood, she says she didn’t realize it until she was already a service member.

“I had no conflicts about my Judaism and being queer, and I wasn’t worried about my parents, but [I realized] I can now get kicked out of the military,” she recalled thinking at the time.

There were far more lesbians than Jews in the service, it seemed to Xavier, but it was still hard to be a woman — “There is that reputation, that you’re either a dyke or a whore,” she said — and the lesbians tended to find each other. Speaking in code about Ani DiFranco albums or softball games seemed to work, as did referring to off-hours spent in San Diego’s gay neighborhood of Hillcrest. But those things also held the threat of backfiring: of outing oneself to the wrong person at the wrong time. And yet, she was able to come out to close colleagues in her division, feeling comfortable with one-on-one talks. Having a butch identity, a shaved head and an interest in women helped her feel like “one of the guys,” though all joking would stop in front of a superior.

That closeness and trust also came to a halt on weekends, when straight men and lesbians headed to different bars — and the women came back with no stories to tell. “I had to be straight all week long,” she said. “We would go be gay — you could take that cloak off for at least a little bit.” Even her parents felt closeted; they couldn’t talk proudly and openly about their gay daughter in the Navy.

Her Judaism came to provide an important outlet. “I think it was a way of keeping my individualism while in the military,” said Xavier, who got a hamsa tattooed on her arm while serving (“to me it’s the hand of God that wards off the evil eye”), in addition to tattoos of the tree of life and a Star of David wrapped in barbed wire with the Sh’ma written around it.

Since enforcement of DADT began 16 years ago, an estimated 14,000 service members have been discharged because of their sexuality. As the repeal is implemented over the coming months, gays may be able to re-enlist — but Xavier isn’t sure she wants to return. She doesn’t agree with the wars in Iraq and Afghanistan, for one thing. “Politically I have such issues with the military, and at the same time I miss it,” she said. “I don’t think I would re-enlist. I think the part of me that wants to re-enlist is the little boy who wants to watch war movies. But there is something about that shared experience, to me, that is appealing.”

Double Marker: A Gay Jew in the Navy