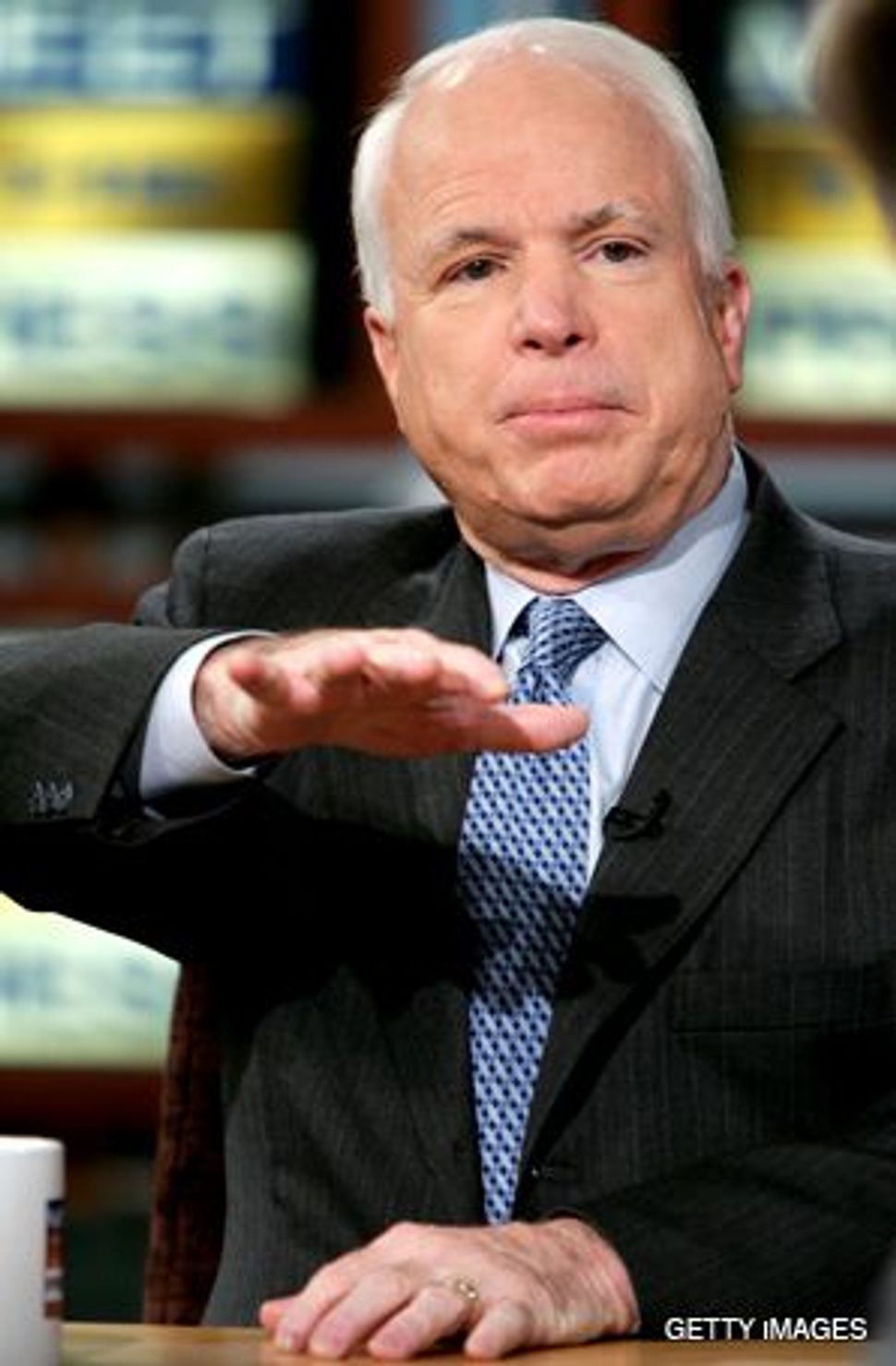 MCCAIN: As Israel looks for diplomatic openings with Hamas, the Arizona senator has maintained a hard line.

In response to news of a looming cease-fire between Israel and the Palestinians in Gaza, advisers for Senators Barack Obama and John McCain have said that the United States should maintain its current diplomatic freeze on dealings with Hamas, the militant Islamic group that seized control of the coastal enclave last year. 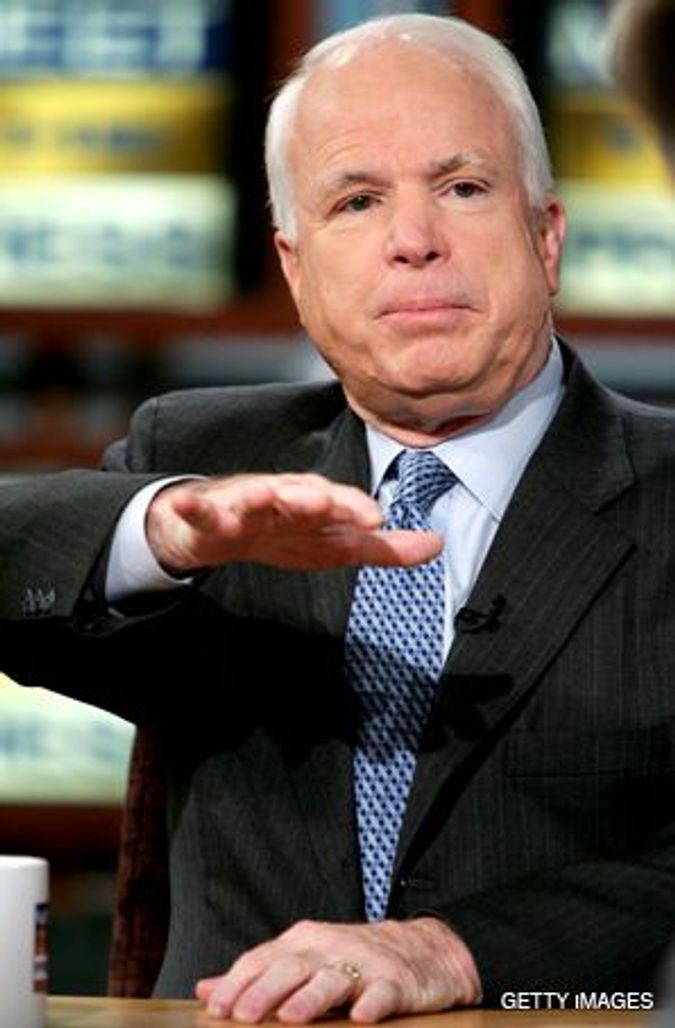 MCCAIN: As Israel looks for diplomatic openings with Hamas, the Arizona senator has maintained a hard line.

Staffers for both presidential contenders spoke with the Forward during a week that saw several dramatic diplomatic developments involving the Jewish state, including the emerging Israel-Hamas deal and the first public acknowledgement of ongoing, indirect peace talks between Israel and another of its longtime foes, Syria. In Lebanon, the Western-backed government and its Hezbollah-led Shi’ite opposition made progress toward ending an 18-month stand-off with the formation of a new unity government that gives veto power to Hezbollah, an Islamic militant group that is shunned by the United States and supported by Syria and Iran.

“It’s certainly not our view that Hamas needs to be brought into the peace process until they fundamentally change their policies on support for terrorism, recognition of Israel and recognition of past agreements reached by the Palestinian Authority,” said an adviser in the McCain campaign who did not want to be named.

A similar sentiment was echoed by an Obama staffer, who added the senator “recognizes there’s a debate in Israel about how to deal with Hamas… but he’s not going to second guess or dictate to them what they should do.”

The recent developments have highlighted the gulf between the Bush administration — which has long opposed American engagement with Syria and Iran, as well as their militant client groups — and Israeli officials, who have increasingly pursued diplomatic channels despite opposition from Washington. In reaction to the recent flurry of talks, several foreign policy experts said the next American president will be asked to re-evaluate if and how the United States should engage with foes in the Middle East as the Jewish state pursues diplomacy.

“I don’t think the Americans should talk to Hamas directly, but then again, they cannot be more pro-Israeli than the Israelis,” said Meyrav Wurmser, a director and senior fellow at the conservative Hudson Institute’s Center for Middle East Policy. While Wurmser herself strongly opposes Israel’s current negotiations with Hamas, she said that eventually a shift in Israeli policy may force the United States to reconsider its own strategy.

“America must keep its own interests in the region in focus, but if Israel is talking — and I think it’s idiotic on Israel’s part — not to shift at all would simply look foolish,” Wurmser said.

The degree to which America should pursue negotiations with foes has been a hot-button issue in the presidential campaign for months and has produced several acrimonious exchanges between Obama, now the overwhelming favorite for the Democratic nomination, and Republicans, who have repeatedly argued that the Illinois senator’s stated willingness to hold unconditional bilateral talks with such rogue nations as Iran and Syria reflected dangerous naiveté.

Amid the broader debate over diplomatic engagement, Hamas has been a political hot potato for both presidential frontrunners. Obama has fended off attacks from McCain and other GOP leaders over comments made last month by Hamas political adviser Ahmed Yousef, who indicated he would prefer to see Obama in the White House; subsequently, the Illinois senator cut all ties between his campaign and former Clinton official Rob Malley after news reports drew attention to contacts that Malley has had with Hamas leaders while heading the Middle East and North Africa program at the International Crisis Group.

McCain, in turn, was charged with flip-flopping on Hamas by a former assistant secretary of state, Clinton official James Rubin, in the pages of The Washington Post. Two years ago, in an interview Rubin conducted with the Arizona senator for a British network, McCain acknowledged what he called “ a new reality in the Middle East” in which elections had thrust Hamas into the government of the Palestinian Authority. He argued that “sooner or later we are going to have to deal with them.”

In contrast to the uproar in the United States in April when former president Jimmy Carter met with Hamas leaders, in recent days both the Bush administration and advisers to McCain and Obama have downplayed the significance of news reports that a retired French diplomat met with Hamas leaders in Gaza last month at the behest of the French government. According to a 2002 agreement, the United States, Russia, the European Union and the United Nations have agreed not to negotiate with Hamas until the group takes certain steps, including renouncing violence and recognizing the State of Israel.

“People having talks with Hamas without the Quartet’s positions being met — that’s clearly not consistent with the Quartet,” the adviser for Obama said, speaking on condition of anonymity, when asked about the meeting by the Forward.

Advisers for Obama and McCain — both of whom have said during the campaign that they themselves would not meet with Hamas leaders as president — insisted that the Egypt-brokered talks between Hamas and Israel would not change their positions. They also emphasized the need for the next president to take steps to help bolster Palestinian moderates.

But several foreign analysts who spoke with the Forward said that the next president is likely to inherit an even more complicated situation in the Middle East, in which Hamas will remain a key player.

“The horse is out of the barn, and it doesn’t matter whether someone forgot to close the door,” said Aaron David Miller, who served at the State Department as an adviser to six secretaries of state and recently published “The Much Too Promised Land: America’s Elusive Search for Arab-Israeli Peace.” “Israel has a practical [security] problem… that only Hamas can fix. That’s the difference between living far away, in the comfort and security of America, as opposed to living on top of a volcano.”

In the view of Daniel Levy, a dovish American Israeli political analyst who served as adviser to former Israeli prime minister Ehud Barak, the question confronting the next American president will not be, ultimately, whether to engage with Hamas leaders directly, but whether or not to encourage a reconciliation process that creates a functioning Palestinian government that includes both Hamas and Fatah.

If there is a reconciliation effort, “do you actively try to push back against that, and try to bring down that internal reconciliation effort, as [the Bush] administration did in the Palestinian context?” said Levy, a senior fellow and director at the Century Foundation and the New American Foundation. “When one is talking about the American approach to Hamas, one is talking much more about the message that America sends to other third parties… and is the message that those guys are part of an axis of evil and we have to defeat them militarily, or is the message ‘We’re not going to be there, but see if you can get them to do A, B or C”? That’s the distinction, and I think either [McCain or Obama] could find himself in that place.”