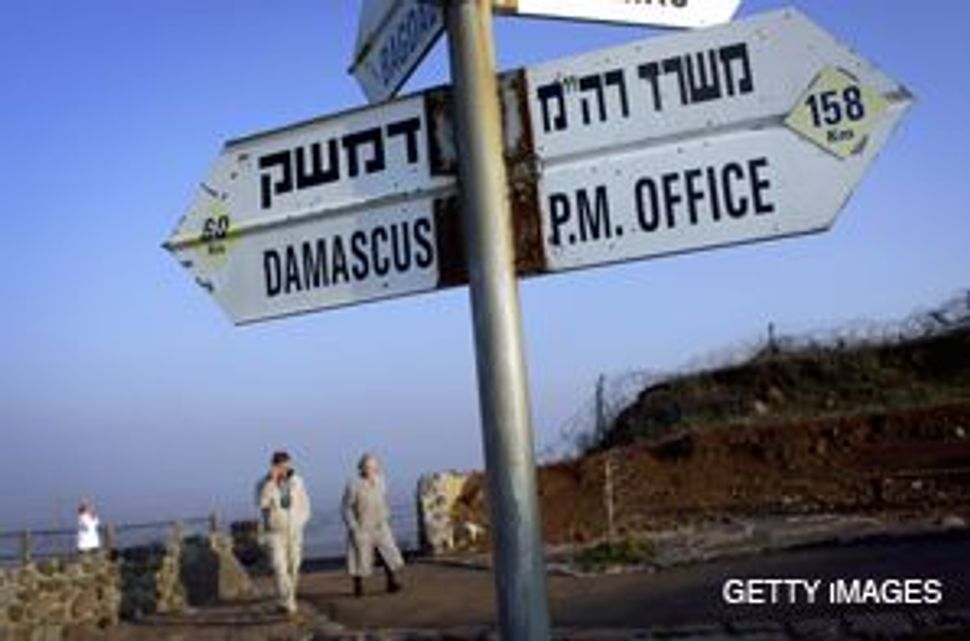 NEW DIRECTIONS?: The distance from Damascus to Jerusalem has never been great, as a signpost on the Israeli-Syrian border illustrates, but with Israel and Syria publicly acknowledging that they have been holding unofficial peace talks, the diplomatic gulf between the two may be shrinking.

On its face, the simultaneous announcements by Israel and Syria this week that they were officially engaged in peace talks mediated by Turkey offered the most tangible evidence to date that Israeli-Palestinian negotiations have stalled. Similar Israeli shifts in the 1990s between the Syrian and the Palestinian negotiating tracks typically meant the abandonment of one in favor of the other. 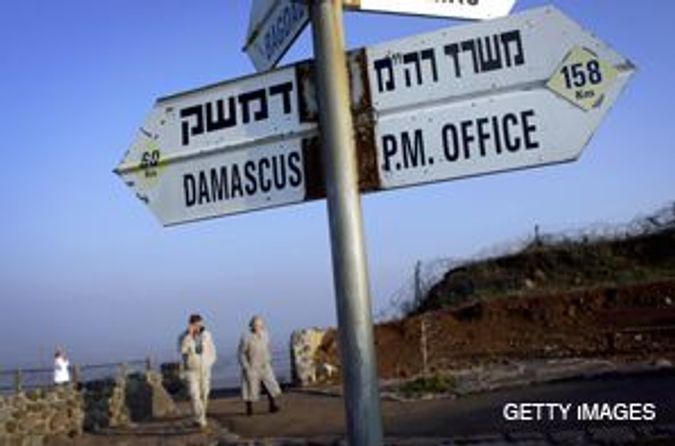 NEW DIRECTIONS?: The distance from Damascus to Jerusalem has never been great, as a signpost on the Israeli-Syrian border illustrates, but with Israel and Syria publicly acknowledging that they have been holding unofficial peace talks, the diplomatic gulf between the two may be shrinking.

But this time, things could be different. According to some observers familiar with the process, stepping up one track could actually strengthen the other.

The late Palestinian Authority chairman Yasser Arafat opposed such parallel talks in the 1990s, but he did so at a time when his Fatah party was firmly in command of the Palestinian political scene and foreign influence was limited. His successor, Mahmoud Abbas, is in a vastly different situation, facing a stark challenge from a Hamas movement supported by both Iran and Syria. Abbas warmly welcomed the announcement of Israeli-Syrian talks, and he might just mean it.

“Real progress on the Israeli-Syrian track could have a very favorable impact on internal Palestinian politics by favoring the moderates, including those within Hamas,” said Rafi Dajani, a Washington-based Palestinian affairs expert with close ties to the Palestinian leadership. “In the last decade, all tracks have become intricately linked because you now have a big Middle East game between international and regional powers and surrogates such as Hamas and Hezbollah. The ‘one or the other’ approach does not apply anymore. You just can’t separate Syria from Lebanon and Gaza.”

Through the 1990s, Israel alternated between comprehensive peace talks with Syria and the Palestinians, on the assumption that no Israeli leader could make concessions on both fronts simultaneously. None of the initiatives succeeded, and the failure prompted recriminations from Palestinian and Syrian leaders that Israel was playing one against the other.

The question this time is whether Olmert is indeed willing to both pursue peace with Syria and jumpstart the moribund Palestinian talks by spurring Abbas to be more forthcoming or by offering him some cover to make concessions.

An Israeli official stressed that Olmert was not trying to bypass the Palestinian talks since he himself said the talks with the Syrians began a year ago during a February 2007 visit he made to Turkey, several months before the American-sponsored peace conference was convened in Annapolis, Md.

A similar message was heard this week from Washington. Asked whether focusing on the Syrian track would shift attention away attention from talks with Palestinians, a Bush administration official told reporters: “I don’t see that happening. The Israelis have shown very serious intentions regarding the Palestinian track.”

Amatzia Baram, a Middle Eastern history professor at the University of Haifa, argues that in contrast to Arafat, who tangled with Ehud Barak when the former Israeli premier pursued peace talks with Syria in the late 1990s without advising him, this time around, “it was all done in coordination with Abu Mazen,” as Abbas is known.

Baram claims Abbas was informed of the talks a few months ago by the Turks and that he supported it since it could help his negotiating efforts with Israel. “Whatever agreement he is reaching with Israel, he will come under terrible attack from Hamas accusing him of high treason. With Syria doing what it is doing, Hamas will be muffled by Assad and the Palestinian pragmatic public will find it easier to swallow their unrealistic ambitions.”

But given the limited results of several rounds of talks between Israeli and Palestinian officials since the beginning of the negotiations announced last November in Annapolis, some veteran Middle Eastern peace negotiators are skeptical that this is a carefully orchestrated move between Israeli Prime Minister Ehud Olmert and Abbas. Some believe this is a way for Olmert to force Abbas’s hand.

“Leaving one track and going for the other is a way for Israel to get some leverage on the Palestinian track that seems stuck,” said Aaron David Miller, who was part of American peace negotiation teams in the region for three decades.

Others reject the leverage argument outright and take a decidedly dimmer view.

“I think we are watching the movie ‘Groundhog Day’ again,” said Diana Buttu, who was a member of a Palestinian negotiation unit headed by Abbas a few years ago. “Barak used the same tactics in 1999 and 2000 with disastrous consequences, and I similarly think that Olmert should realize that peace with Syria will only come after Israel ends its occupation of the West Bank, Jerusalem and Gaza and not before.”

“I am very skeptical about this announcement, because the Syrian track was revived as a result of the Palestinian track going nowhere,” said Murhaf Jouejati, a professor of Middle East studies at the National Defense University who has been an adviser to the Syrian negotiation team with Israel and the U.S. “Israel has played this kind of pingpong before, under Barak and under Rabin, who were both more popular than Olmert currently is, but still could not get it done.”

The Bush administration, while urging Israel to focus on the Palestinian negotiations, also expressed some agreement with the notion that the Syria channel could help peace talks by denying Hezbollah and Hamas a key support base and further isolating Iran.

Even if Washington has made it clear that a Syrian deal must address Damascus’s relationship with the two groups, the decision to allow the Turkish mediation could also be a way for the administration to boost its low standing in the region.

“I cannot imagine at least some important elements of the Bush administration not giving at least a yellow, if not green, light to the talks over the past six months, particularly since two strong U.S. allies, Turkey and Israel, are involved,” said David Lesch, a Syria expert at Trinity University. “It could also be that the clock is ticking on the Bush administration’s effort to bring about an Israeli-Palestinian settlement, so a cautiously willing Syria might be more attractive at the moment in terms of actually achieving something before its term ends, with all of the potential positive repercussions in Lebanon, Iraq and even with the Palestinians from the U.S. perspective.”