Limmud at 30: How a Tiny U.K. Conference Became a Worldwide Movement 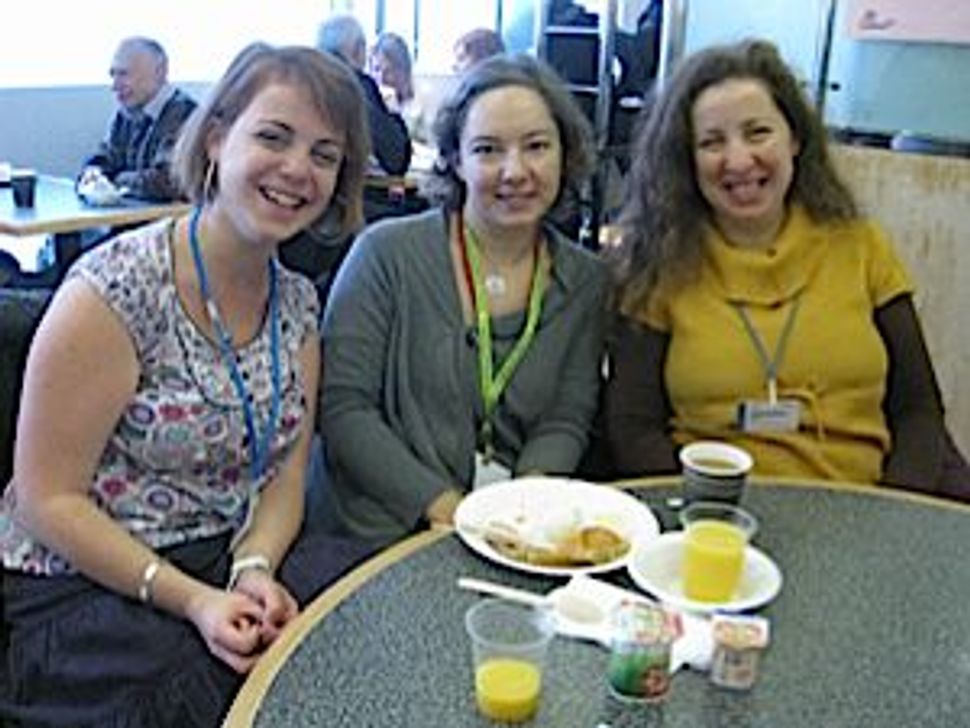 Learning Made Fun: From left, Reka Bodo, Eszter Susan and Zsuzsa Fritz, all of Limmud Hungary. Image by Paul Berger

When Réka Bodó was 13, she presented her mother with a choice. A rabbi had offered Bodó a bat mitzvah at a Jewish summer camp in Hungary. She told her mother that she could either have the ceremony there or in the city of Budapest, where her mother would be able to attend. Although Bodó’s mother, a non-practicing Jew, disapproved of her daughter’s interest in religion, she was a proud guest at the ceremony in the city’s Frankel Leo Street Synagogue.

Nine years later, Bodó’s pursuit of Judaism goes on — and it has taken her to a classroom at Warwick University, England, where she is surrounded by about 30 Jews from South Africa, Israel, Germany and America. They’re participating in a seminar called “Taking Limmud Back Home” — one of about 1,200 sessions held over a six-day Limmud conference in England, which began on December 24.

It’s a landmark year for the organization: This winter marks three decades of Limmud (“learning” in Hebrew). It was started by British Jews who attended a residential study camp that was organized by the Conference of American Jewish Educators. They wondered if they could import a similar model to the U.K. Indeed, the model proved importable beyond anyone’s dreams: Limmud has grown from an educational conference attended by about 85 people into a global movement for informal Jewish education. It’s become a wildly successful — and by some accounts, addictive — method of rekindling interest in Judaism worldwide. In 2010, 35,000 people attended a Limmud event. In the U.K. alone, this year’s conference drew 2,500 people from 28 countries.

Walking around the snow-covered Warwick University campus in late December, it was possible to overhear conversations in French, Hebrew, Russian, Greek and Italian, as well as a range of English accents from South Africa, Australia, North America and Britain. Limmud now claims 55 branches, including eight in the United States. The New York branch’s event will be held in the Catskills in January. The following month, it’s Limmud L.A.’s turn.

“I think Limmud is contagious,” said Karen Radkowsky, who co-founded Limmud New York seven years ago and serves on the steering committee of Limmud International, which develops Limmud overseas.

It is after 11 p.m. and Radkowsky is sitting in the atrium of the university’s arts center, which is swarming with people of all ages, shmoozing over drinks. “Once you are hit by the bug,” said Radkowsky, “you just want to share it with other people.”

Sessions at Limmud run simultaneously. At this year’s U.K. conference, participants could choose from among 15 or more subjects at any time, beginning early in the morning and running late into the night. Topics included Jewish history, politics, arts, culture, Torah study and spirituality, with titles such as “Who Needs the Diaspora,” “Islamic and Jewish Duties of the Heart,” “The Conversion Crisis” and “Bubbelehs Love to Boogie.”

Though many presenters are hand-picked — among the most well-known speakers this year were Irishman John Ging, head of the U.N.’s relief agency in Gaza, UNRWA, and British author and columnist David Aaronovitch — anyone can volunteer to lead a session. Marquee speakers sometimes disappoint, while sessions led by unknowns become surprise hits. Attendees are expected to participate, and some of the most insightful comments often come from the audience.

One appeal of Limmud is the range of Jewish movements that it attracts. Though Britain’s Orthodox umbrella group, the United Synagogue, often frowns upon members taking part, Rabbi Yitzchak Schochet, a frontrunner for the soon-to-be-vacant post of Chief Rabbi, attended Limmud this year and spoke.

Meir Adler, of England, said: “Although Limmud is not the same in all countries, there is something that has stuck through all these versions, and that is its openness and acceptance. It’s about that dinner-table conversation with somebody who comes from a totally different place than you, and suddenly understanding where they are coming from.”

For many people, Limmud is a chance to take a break from busy everyday life and explore religion and culture. But for many overseas participants, England’s conference is a chance to learn how to launch or grow Limmud in their own communities.

Raya Burshtein, of St. Petersburg, Russia, said that the conference sparked numerous questions for the forthcoming Limmud St. Petersburg, which she is organizing for later this year. “I look at all of the volunteers working and the leaflets that are printed each day for changes to the program and I think, ‘How am I going to manage this?’” Burshtein said.

Limmud migrated outside the U.K. about eight years ago, first to Israel, then to Australia, America and Holland. Although conferences are volunteer-run, Limmud International was formed in 2006 to give financial and logistical support and training to nascent groups.

The recent financial crisis hurt Limmud International’s budget. But despite the body’s commitment to a consolidation phase, about 10 groups have expressed interest in starting new conferences in 2011.

One of the guiding principles of Limmud is that everyone works for free. Apart from three paid positions, the remaining hundreds of people who organize and staff conferences are volunteers. Similarly, conferences are, on the whole, only nominally subsidized. The cost for one week at Limmud U.K. this year started at £345 per person (about $500). Three-quarters of the budget was supported by the fee, which includes accommodation and kosher meals.

In Eastern Europe, the American Jewish Joint Distribution Committee sponsors a series of Limmud-like events, called Limmud Keshet, which is how Bodó first heard about the movement.

But several years ago, Limmud Keshet organizers in Hungary decided that too many of the 400 attendees were there because it was free. “They felt that it did not reflect the true values of Limmud,” said Bodó. So they started Limmud Budapest last year and enlisted Bodó as a volunteer organizer. Their first event, held over a weekend, cost about $80 per person and attracted 130 people. This year, about 170 people attended.

Bodó emphasized that the founders of Limmud Budapest are not millionaires — they include a school principal, a lawyer, a theater director and a theater manager — yet they invested their own money to set up a small office with a room and a computer. Like so many Limmudniks, they must be addicted. Said Bodó: “This is something only Limmud can do.”

Limmud at 30: How a Tiny U.K. Conference Became a Worldwide Movement