From Siberian Cell, Khodorkovsky Makes Mother Russia His Cause 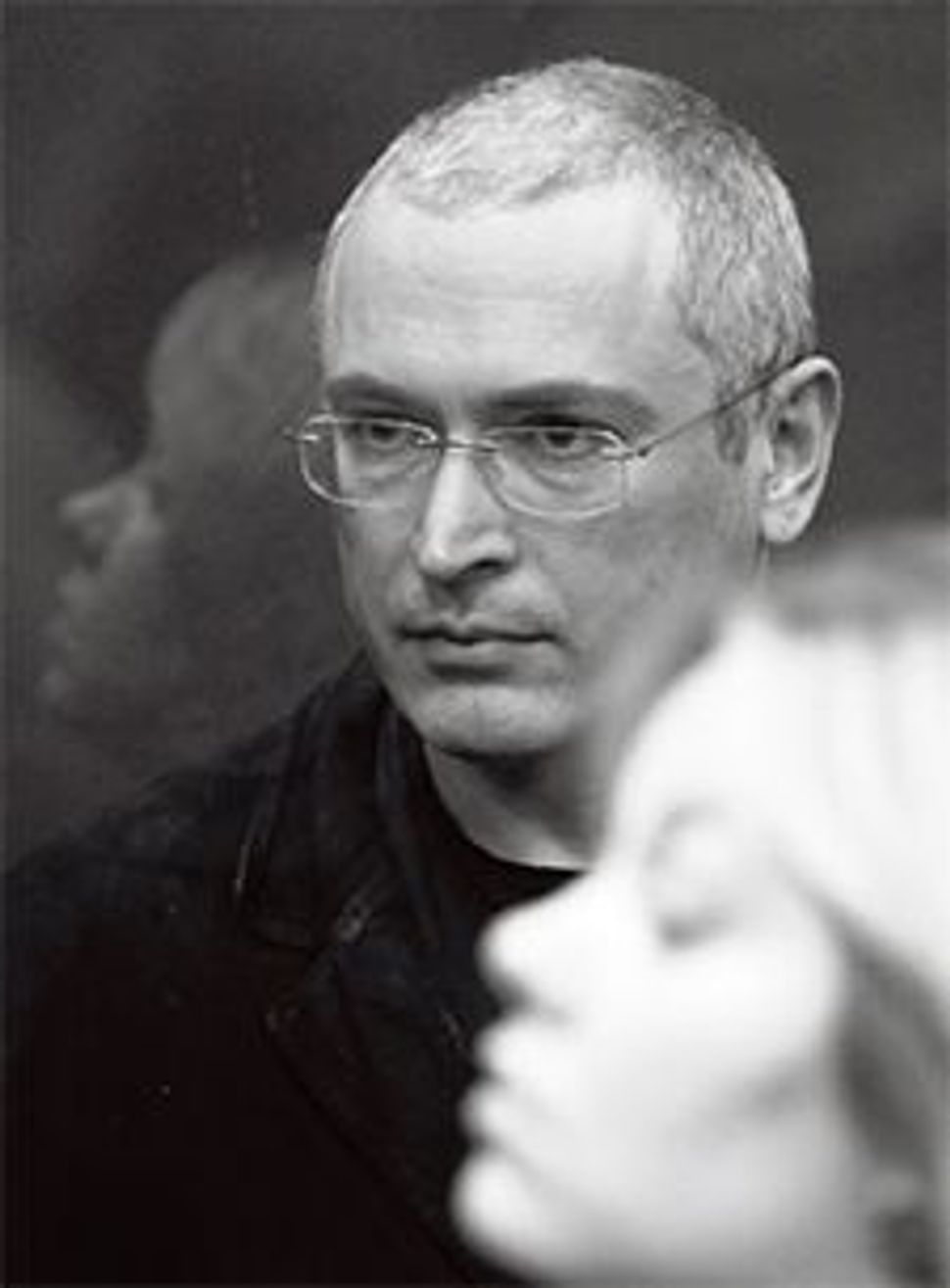 Imprisoned: The jail term of Mikhail Khodorkovsky, once Russia?s richest man, was extended by six years in December. Image by Reuters

As Mikhail Khodorkovsky stood in a glass cage in a Moscow courtroom, listening to the judge extend his sentence in a Siberian prison by another six years, he smiled at times. It was a gesture that many of his supporters read as a sign that he accepted his fate and the role he was meant to play in the struggle for democratizing Russia.

It also further cemented a decision that Khodorkovsky himself had made years earlier: His allegiance is not to his Jewish identity, which might have led him to Israel at a critical moment in his ordeal, but to his Russian identity, to the land of his birth.

To stay or to leave is a debate that Russian Jews have been having with themselves for the past century. 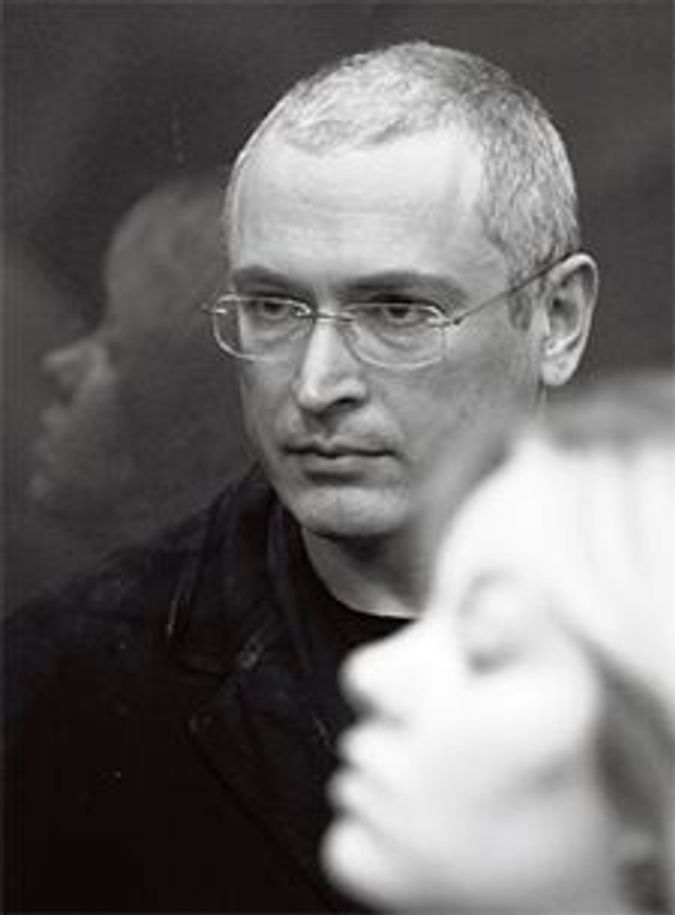 Imprisoned: The jail term of Mikhail Khodorkovsky, once Russia?s richest man, was extended by six years in December. Image by Reuters

Khodorkovsky, 47, a former oil tycoon and once the richest man in Russia, was first arrested in 2003, after he had begun to use his riches to support political parties opposed to Vladimir Putin, then president of Russia. This recent verdict, handed down on December 30, came after his second embezzlement trial, in which he was tried for what seemed to most informed observers a highly improbable scheme that involved his stealing all the profits from his oil sales. His treatment by the courts, and the strong sense that his sentence was dictated by a vengeful Putin — who, referring to Khodorkovsky, told a radio program weeks before the verdict that “a thief should sit in jail” — has turned Khodorkovsky into a martyr in a Russia that has seemingly abandoned the rule of law.

He is also the son of a Jewish man. Khodorkovsky (pronounced CHO-der-KOV-ski) himself has always denied that anti-Semitism has played a role in his ordeals. Moreover, his decision to stay in Russia and make his future there while so many of his fellow Jews left was an affirmation of his loyalty. But in that choice is the Jewish element to this story.

“Every Jew in the Diaspora has a kind of dual identity: One is connected to the place you are living, and the other is your Jewish identity,” said Leonid Nevzlin, Khodorkovsky’s onetime deputy at Yukos Oil Company, who managed to get out of Russia just before he, too, faced a barrage of charges, including murder, hurled at him by the state. “In our history, this choice defines your future,” he said. “Look, for example, at the Jews in Germany who decided to be more German than Jews. We all know what happened to them.”

Nevzlin has a good vantage point from which to judge Khodorkovsky’s decision. Now living in Israel, and having become a major philanthropist of Jewish causes, he looks back mournfully at the different choices he and his friend made.

“I always felt that I am first of all Jewish and then a Russian citizen,” Nevzlin said. “For Khodorkovsky, it was the opposite. And the Yukos case made us face this specific question. What choice would we each make? Where would we like to live? And each of us made his own choice. I totally respect Khodorkovsky’s choice, though it doesn’t match mine.”

Nevzlin also said that now, after seven years of imprisonment and even after this recent verdict, it’s a choice he believes Khodorkovsky would make again.

In many ways, this debate mirrors other moments in Russian history when Jews were forced to decide whether they would try to change their society from within or abandon it as a place where they could never truly be integrated.

This was the case during the 1917 communist revolution, when many Jews believed that it would result in a more egalitarian society — one that would eliminate anti-Semitism — and joined the Bolsheviks.

Years later, in the 1970s, during the height of the Soviet Jewry movement, while groups of Jews pushed to leave the Soviet Union, others were committed to the cause of democracy, to the cause of human rights first. Some of the most important dissidents, people like Larisa Bogoraz and Elena Bonner, were Jews who had no interest in leaving for Israel or anywhere else. They wanted to reform the Soviet Union.

When the Soviet Union was collapsing in the early 1990s and a wave of anti-Semitic ultra-nationalism hit the streets, Jews were once again forced to choose whether they should have faith in a better future or leave for an uncertain if more secure life in Israel or the United States.

The situation today is a stable one for Jews in Russia, according to those who keep tabs on the community — and some might even say it is flourishing. And yet this long history recommends alertness and caution.

“There are so many things that are different today and promising,” said Felice Gaer, director of the American Jewish Committee’s Jacob Blaustein Institute for the Advancement of Human Rights. “But at the same time, the direction signaled by the Khodorkovsky case, by Putin’s leadership, by the whole atomization of the human rights movement, is all very troubling. If I were to be asked by Khodorkovsky himself should he stay or should he leave, it would be very hard to suggest that he should stay. For someone like him, as much as he’s tried to change things, with his money, with his example, there comes a time as human beings that people are just worn down.”

Most observers believe that Khodorkovsky, like all the oligarchs of the 1990s, was engaged in what would be considered some form of white-collar crime. But in his last years in control of Yukos, Khodorkovsky was actually attempting to bring a certain transparency to his business practices, and so he preached the importance of opening up society, including funding many Internet training centers. He also spoke about the need to reform Russia’s democracy.

Khodorkovsky’s decision to see himself as Russian has in many ways prevented his cause from being taken up as a Jewish concern.

But many American Jews involved in human rights, like Elie Wiesel and Stuart Eizenstat, believe that democratization in Russia, Khodorkovsky’s cause, should be an interest of the American Jewish community.

Mark Levin, who since 1992 has acted as executive director of the National Conference on Soviet Jewry, said that at the moment, making Russia freer is not a “central focus” of American Jews, but there is an understanding that the future of a Jewish community in Russia depends on whether it remains democratic.

“Jews thrive in open and free societies and have greater opportunities to thrive,” Levin said. “When we look at Russia today, we do have some concerns. Can the current atmosphere be sustained under current conditions? How will the Russian government deal with what has been a large increase in xenophobia and ultra-nationalism? All this will go a long way to determining the future of the Jewish community.”

Nevzlin, for his part, said he also thinks that American Jews should care about what happens in Russia, even though it is not his country anymore.

“As long as there is a democratic future for Russia, and as long as it happens before Russia completely collapses, there is a Jewish future there, as well,” Nevzlin said. “American Jews should care about this fate, if for no other reason than because tikkun olam tells us to.”

From Siberian Cell, Khodorkovsky Makes Mother Russia His Cause