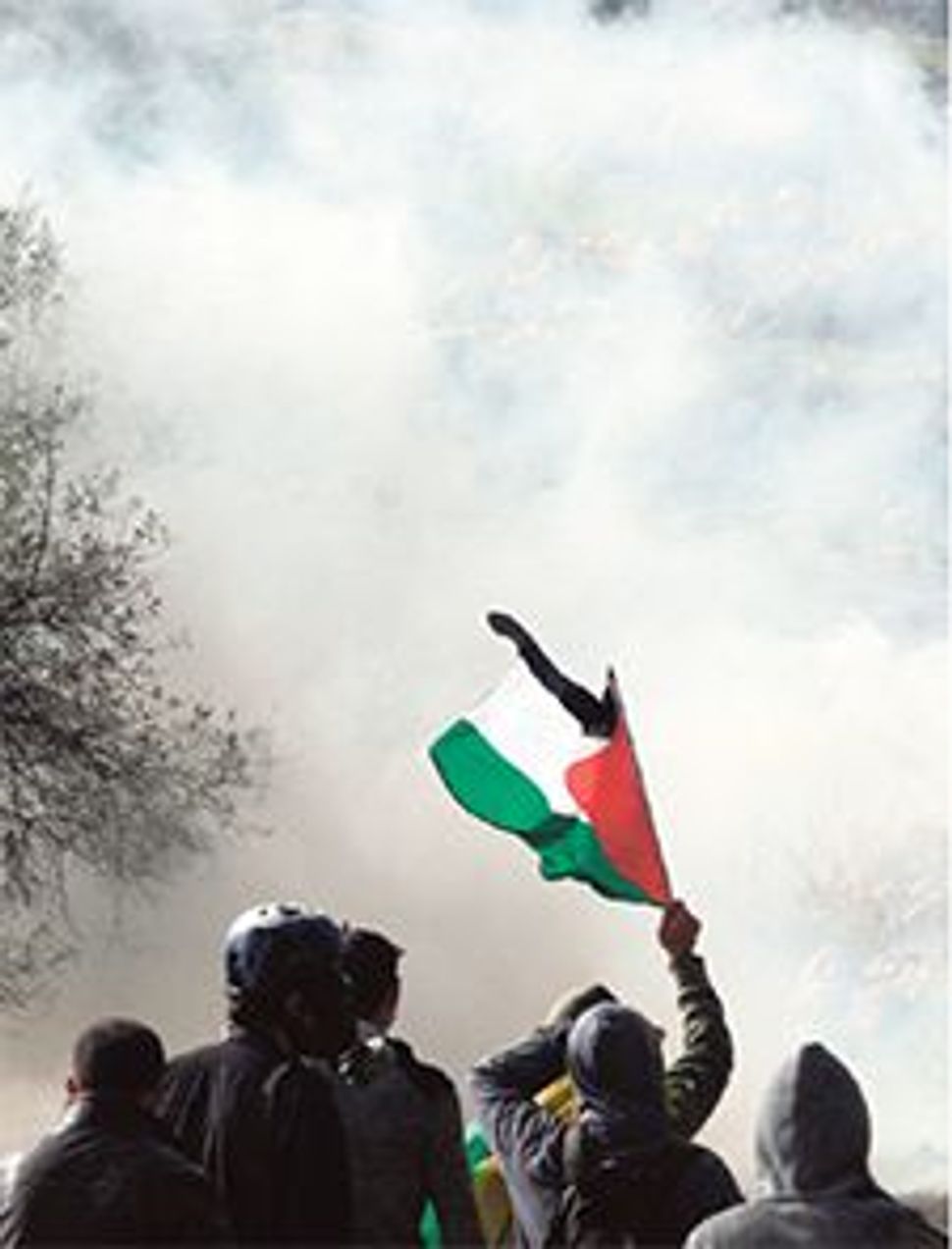 Gas and Tears: With the January 1 death, Palestinian activists count 21 people dead from protests against the barrier wall. Image by Getty Images

The Israeli army’s alleged killing of Jawaher Abu Rahmah, the unarmed woman who reportedly died from tear gas inhalation during a protest of Israel’s West Bank separation barrier, is putting the army’s tactics at such demonstrations under greater scrutiny, along with its moral credibility. 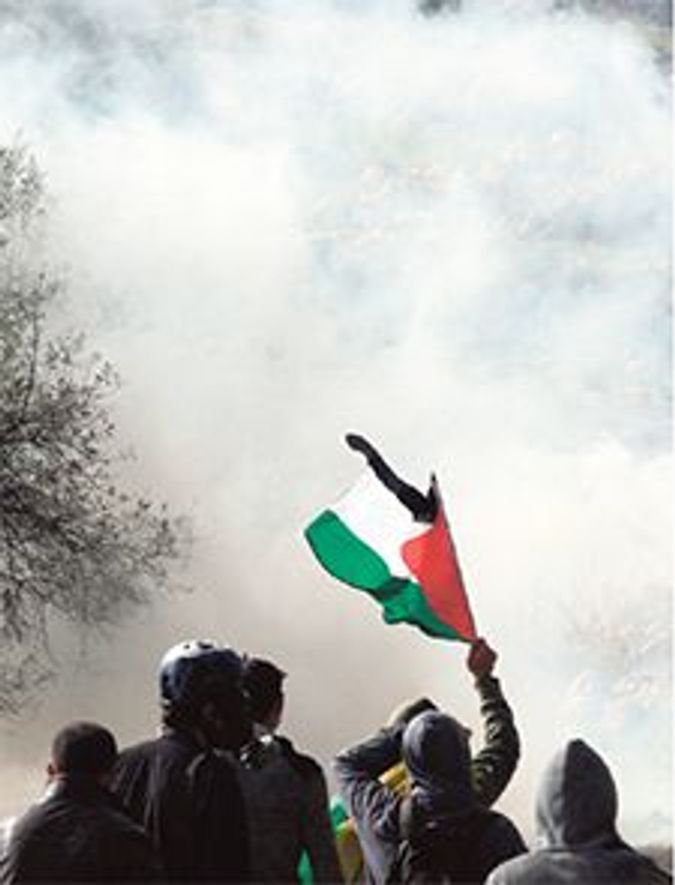 Gas and Tears: With the January 1 death, Palestinian activists count 21 people dead from protests against the barrier wall. Image by Getty Images

At the same time, the army is attacking the protesters’ credibility. It is challenging accounts from Abu Rahmah’s family members and other protesters, from medical personnel at the scene and from contemporaneous press and Twitter accounts all reporting on Abu Rahmah’s fatal encounter.

Israel Defense Forces sources, speaking anonymously to journalists from the Israeli dailies Yediot Aharonot and Haaretz have cited medical records of Abu Rahmah to assert, among other things, that medical personnel gave her an unusual quantity of drugs of the sort used for treatment of poisoning, drug overdose or leukemia. They have suggested she may have died for reasons related to this or because of medical errors committed by her doctors at the Palestine Medical Complex in Ramallah, to which she was rushed. They have also asserted that 36-year-old Abu Rahmah never attended the December 31 protest.

The case highlights questions about the army’s handling of the regular demonstrations Palestinians and their supporters stage in protest of the separation barrier. Abu Rahmah is the 21st person to die in these protests since 2004, according to Jonathan Pollak, a spokesman for the Popular Struggle Coordination Committee, which organizes demonstrations in villages across the West Bank. Abu Rahmah’s own brother, Bassem, died in April 2009 at age 31 when a tear gas canister hit him in the chest.

So far, the army has not released any of the records the unnamed Israeli officials cite as the basis for their claims. Numerous witnesses have supported accounts placing Abu Rahmah near the site of the demonstration, in the West Bank village of Bil’in, though apparently she was at its periphery, some distance from the center of action. The medical director of the Palestine Medical Complex insists she died from gas inhalation.

Meanwhile, Israeli protesters angered by Abu Rahmah’s death are putting the United States under the microscope, as well, for what they say is its complicity in her demise. The tear gas and tear gas delivery devices used at the demonstration, and others like them, were manufactured by Combined Systems, Inc., a security and military products company based in Jamestown, Pa., and transferred to Israel under America’s Arms Export Control Act, which requires government approval for their sale and regulates their use.

After Abu Rahmah died, Israeli protesters hurled empty tear gas canisters said to have been recovered from demonstrations against the security barrier at the home of America’s ambassador to Israel, James B. Cunningham.

Asked to comment on Israel’s use of the tear gas, a State Department representative told the Forward, “The United States expects any recipient of U.S. defense articles to use those items in accordance with the terms and conditions of any U.S. transfer.”

Israeli diplomatic sources said Israel had not, so far, received any inquiries from Washington regarding the use of tear gas in the Bil’in incident.

Pollak said that Abu Rahmah was the second person to die from tear gas inhalation at the demonstrations. Most of the rest died of live fire or from being hit by rubber-coated bullets. Other individuals have been seriously injured when hit directly by tear gas canisters launched by Israeli soldiers.

The army says it is reacting to Palestinians who pelt soldiers with stones and try to dismantle the separation barrier.

Israel says the barrier, part fence and part cement wall, protects its citizens from gruesome terrorist attacks that plagued the country in the second intifada. But at numerous points in the West Bank, the barrier departs from the internationally recognized border and leaves Palestinian land and Jewish settlements on the Israeli side.

Villagers in Bil’in began protesting the route of the security fence, which runs through their land, nearly six years ago. More than three years ago, Israel’s high court ordered the army to reroute the barrier’s route so as to take in less of the village’s land. The army began work on the rerouting a year ago and has yet to complete it.

Critics insist that tear gas and other measures meant as crowd control tactics should not result in so many deaths and serious injuries.

“Ultra-Orthodox Jews throw stones at cars on different streets in Jerusalem on Sabbath. Settlers closed roads and created obstructions to order during the Disengagement,” said attorney Michael Sfard, who represents the Abu Rahmah family. “I don’t recall any wounded demonstrators, and of course not any who were killed. The fact that these demonstrators are unarmed… and are Palestinians, makes the Israeli authorities quicker on the trigger. Even when demonstrators try to damage property, even then, they should not be shot at or gassed in a lethal way. They are supposed to be arrested, and charges brought against them.”

Police spokesman Micky Rosenfeld countered that at the protests, “arrests are made constantly,” but that they are sometimes not enough.

“Each incident is dealt with according to the amount of violence, or the type of violence that takes place at the scene,” Rosenfeld said. “If you have 50 rioters, masked Palestinian rioters threatening one border police unit, or one jeep with three people inside… if it’s necessary for them to use stun grenades it’s fine for them to protect their security.” Stun grenades and tear gas, he said, “make a minimal amount of injuries” for the protesters.

It may be a nonlethal weapon, but tear gas can have serious effects. A 2003 article published by four Israeli army doctors in Archives of Toxicology noted that CS gas — the type used by the IDF at these protests — causes tearing and burning for about 15 to 30 minutes, and this is lessened if people are moved into fresh air. The army has insisted on the safety of CS beyond these immediate effects. But the Israeli army doctors’ article noted, “At high concentrations, enclosed spaces, or prolonged exposures, severe side effects may occur and human deaths from lacrimating [tearing] agents have been reported.”

A 2009 article in the British Medical Journal came to similar conclusions, noting that tear gas is “not a gas at all, but a toxic chemical irritant.” It can have lethal effects in closed spaces, like the 1993 siege on the Branch Davidians in Waco, Texas, when the FBI pumped large amounts of tear gas into a house that later went up in flames. The rare deaths due to the gas usually occurred in patients with asthma. But alternative crowd control methods “seem to be even more deleterious,” the journal noted.

Jerusalem physician Daniel Argo, who attends the protests, said the effects of the gas usually stop after a few minutes and can be eased by breathing fresh air or using an oxygen mask. “But a small minority of people exposed to tear gas need more treatment, and the injury and death of Jawaher is just one case,” Argo said.

According to Efraim Inbar, director of the Begin-Sadat Center for Strategic Studies at Bar-Ilan University, the Israeli military began using tear gas only during the first intifada, or Palestinian uprising, which began in 1987. He said he could not recall one death induced by tear gas inhalation. He also doubted that the Palestinians were telling the truth in Abu Rahmah’s case.

“It’s probably what I read today, that this woman has [a] history of cancer,” Inbar said. “And she was probably not there; it’s part of a psychological operation the Palestinians are conducting against us.”

Yet the tear gas itself is not the only danger to protesters. The gas is released from tear gas canisters, which are fired from gunlike launchers. In addition to killing Jawaher Abu Rahmah’s brother, Bassem Abu Rahmah, an American named Tristan Anderson sustained brain damage in March 2009 after being struck in the head by a gas canister. Last June, American Israeli Emily Henochowicz lost an eye after being hit with a tear gas canister by the Israeli police at Qalandiya. All three incidents are under investigation.

Bassam Abu Rahmah’s death was caused by shooting of a tear gas canister “at a direct angle,” claims Sfard, who is also representing the families of the other two injured activists. Sfard said his legal team reconstructed the scene according to video footage of the protests. “For a tear gas canister, the angle for shooting should be 60 degrees in air,” he said. The army confirmed that an investigation by the military investigative police was under way.

In Henochowicz’s case, Sfard said the police investigators have not interviewed two journalists from the Haaretz daily newspaper who covered the event live. Military correspondent Avi Issacharoff noted in his story, “I remember that what surprised me was the volley of grenade fire directly aimed directly at the demonstrators, not at the sky.”

The Israeli military source says the army does not plan to change its methods. A statement released by the spokesman noted: “The tear gas used by the IDF, like all other riot dispersal means, is checked rigorously before being put into active use. During the approval process, the device passed all the necessary tests and approvals.”

Issacharoff, the Haaretz journalist, said the army officials had made claims they could not support in their effort to respond to accusations after Jawaher Abu Ramah’s death. He recalled an interview he conducted with an Israeli officer in which the officer claimed, “We understand she had blood cancer.”

To Inbar, the injuries and fatalities caused by the canisters are part of the normal course of events.

“Israelis might shoot at short distance, and then people get hit,” he said. “It happens. People are under stress, the crowds are not very friendly and you are afraid, so you make mistakes. But generally tear gas is nonlethal.”

The issue, as Inbar sees it, is that Palestinian protesters get close to the fence and try to damage it.

“Personally, I think we should shoot in certain areas,” he said. “A fence that has no kill zone is useless…. We are extremely moderate in our response.”