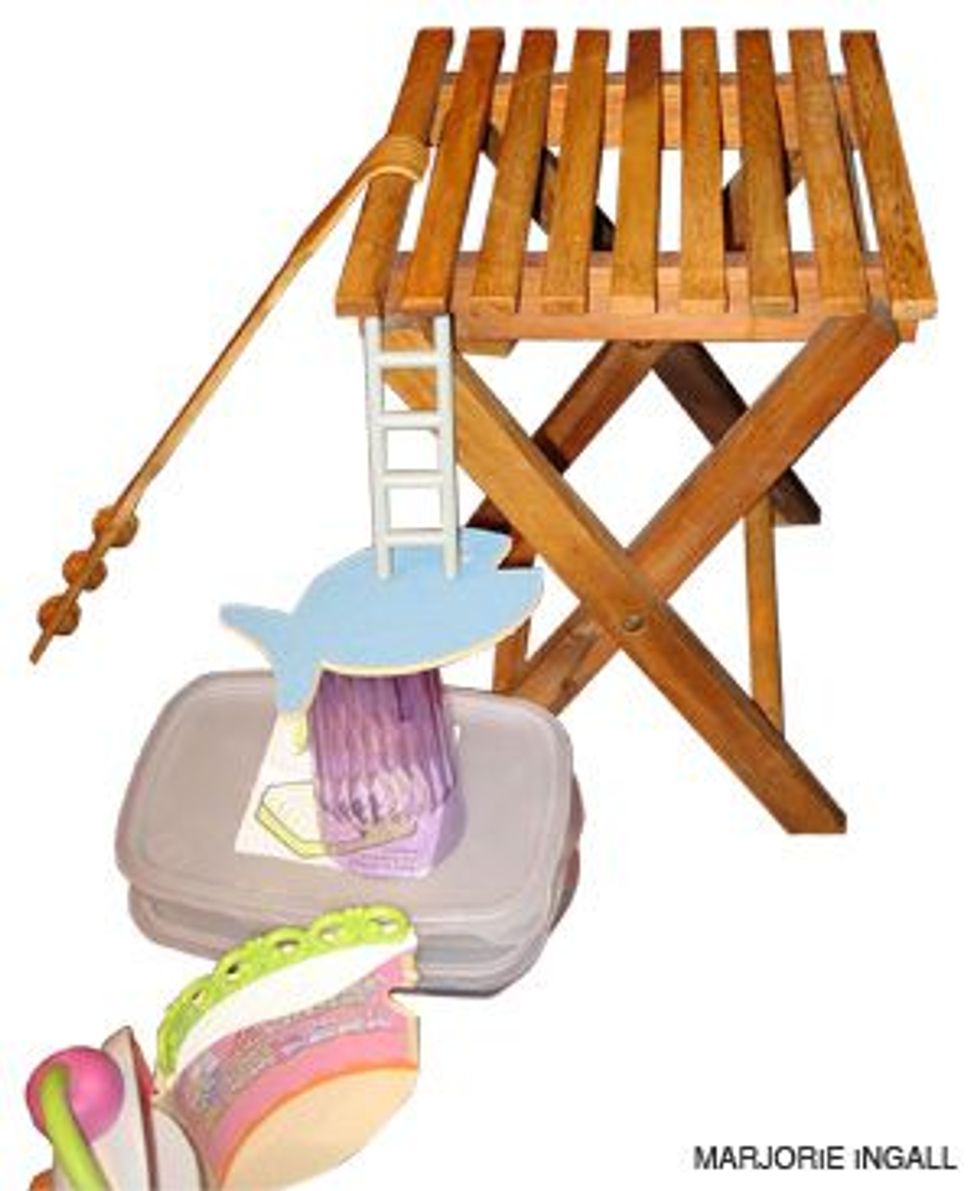 ‘That picture is awesome!” said my friend Gayle, as she looked at a painting Josie had made in kindergarten. My daughter had painted a line of orange, yellow and red semi-constructivist children, some with stars over their heads and some with hearts hovering over them. 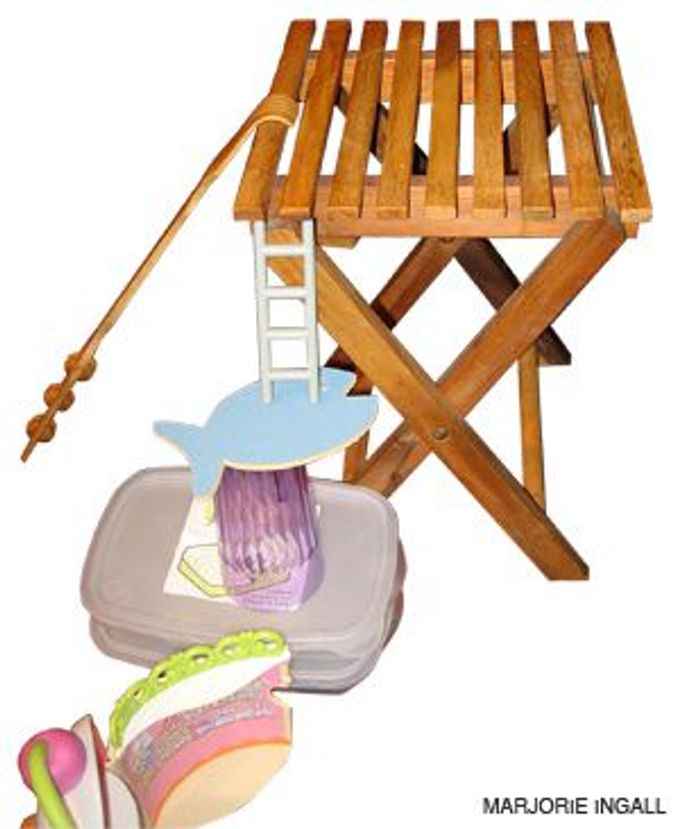 “I know!” I said. “Maxie hasn’t done anything like that yet. She hasn’t made a singular representational drawing.”

Gayle stared at me with a raised eyebrow.

“Did you just hear yourself?” she asked. “You sound like one of Those Parents.”

But it’s hard not to compare your kids. And I loved to draw when I was little; my earliest ambition was to write and illustrate children’s books. I wanted both my kids to share my passions. And sometimes I worry, like a horrid neurotic one of Those Parents, because Maxine isn’t interested in drawing.

And then I realize I need to be slapped upside the head. Maxine is an artist; I just need to pay attention to the media in which she works.

At 3, she loves to put together train tracks, build with Legos, push buttons (she keeps reprogramming various alarms throughout the house, so that I have to stagger blearily out of bed at 2 a.m. to turn off one of her beeping masterworks). She incessantly hides things, like a chipmunk preparing to hibernate. I’ll look under the coffee table and find five little plastic Care Bears all in a row; I pick up a couch pillow and there’s a fire truck and two Q-tips under there. Usually, I sigh and clean up. But recently, instead of demolishing her mise en scene, I asked her why she’d placed the objects the way she had. And I discovered she had stories for everything. One Care Bear was sick and the others were comforting it; the Q-tips were extra hoses for the fire truck, which was in a cave… the whole narrative was insight into her tiny strange mind. To a child, the piles of crap on a living room floor aren’t pillows and end tables and blocks — they’re a fort. Maxie is a nurturer and a storyteller. (And clearly a sculptor or performance artist rather than a cartoonist.) Kid art takes many forms.

Furthermore, once I started paying attention to the way Maxie paints when given the opportunity, I realized that again, her interests are different from Josie’s. A lot of her paintings come out brown because she enjoys smearing color on top of color. She loves brushstrokes and textures. On a recent trip to the wonderful Children’s Museum of the Arts on Lafayette Street, I noticed that she painted frames around all her works, a dark outline around the edge of each picture, with the smears and dots of color in the middle. My own shpilkes about her lack of interest in drawing anything recognizable was getting in the way of seeing what she was creating. She had her own style.

How can we parents foster our kids’ creativity, respecting who they are as individual artists? And taking this question a step further, how do we nurture their imaginations in an age of mass consumption, of beeping toys that seem designed to do all the storytelling work, at a time when arts funding in schools has been slashed to the bone, and TV and videogames often seem designed to systematically do all the creative heavy lifting without leaving room for the kids’ imprint?

We can start by reading them well-written, non-lame books (most books for kids are insipid, moralistic and/or incoherent), telling our own family stories, and encouraging kids’ own creative play. Sometimes it’s hard to respect their taking the lead. I remember desperately trying to get baby Josie to bond with a stuffed cat with gingham ears that pleased my aesthetic sense; she instead chose as her “lovey” a tacky white bear-blankie combo with a big heart on it. It rapidly turned gray from so much sticky-handed love. But it was her comfort object, not mine. I’ve known other kids who’ve cuddled many nights with a hairbrush or a hammer. Buh? “We imbue our special things with all kinds of power and imagination,” said Ellen Handler Spitz, author of “The Brightening Glance: Imagination and Childhood” (Pantheon, 2006) and a professor of visual arts at the University of Maryland. She’s interested in children’s creativity and the interconnections among many different art forms, ideas that should intrigue all parents.

We need to let kids put their own mark on things, create their own rules, explore, said Spitz. Pristine isn’t a natural kid-state. And showering our younguns with stuff isn’t helpful, even though our culture encourages planned obsolescence more than ever. “We’re all about the new and the better,” Spitz noted. “But children revel in the old and the untidy.” A well-loved doll, a bunch of drinking straws, a cardboard box — these encourage kids to tell stories. As Simms Taback writes in his marvelous children’s book “Joseph Had a Little Overcoat” (Viking, 1999), based on an old Yiddish song, in which the main character makes his increasingly worn coat into a jacket, then a vest, then a scarf, until nothing is left — “you can always make something out of nothing.”

Of course, bobo parents like me are more apt to glamorize Nothing than too much Something. We fret about our kids’ exposure to non-educational toys and TV; we read all the books about the perils of affluenza; we dream of furnishing nurseries with a modernist rocker, a few reissued classic children’s books and one Moroccan pouf. So I recently stiffened when someone gave my daughters My Little Pony figures and playsets. Tacky! Vaguely porny! And yet, when I watched my girls play with these glittery pastel monstrosities, I saw that they were playing imaginatively, darkly and hilariously. So, uh, perhaps I should just chill.

“I am certain that the tawdry quality of so much TV and other media will never destroy any individual child’s capacity for imaginative thought,” said Spitz. “But even so, I would love to see an opening up of space and time for what Kant called ‘the free play of the imagination’ — time for children to originate ‘from scratch.’ To draw their own pictures, not simply move adult-made pictures around a screen. To work with their hands at something other than tapping keys. What about the sensuous joys of clay, wood, paint, mud, sand, dough, charcoal? And to stare at something other than a small screen. What about the sky, a museum gallery, an ant colony, a fantastic old quilt with every patch different?”

Encouraging kids’ independent creativity can have far-reaching consequences for society, Spitz believes. “In a democracy, we expect citizens to think for themselves, to make connections between past and future, to link up the personal with the public and political, to practice independent thought and judgment,” she said. “All of which requires a capacity to imagine what is not here now but which might be or could be or should be. The argument for fostering creative, imaginative and critical thinking is clear, and it begins in childhood with make-believe and dress-up and story-telling and games that involve ethical choices.”

Let’s give the last word to Picasso, who said, “All children are artists. The problem is how to remain an artist as one grows up.”