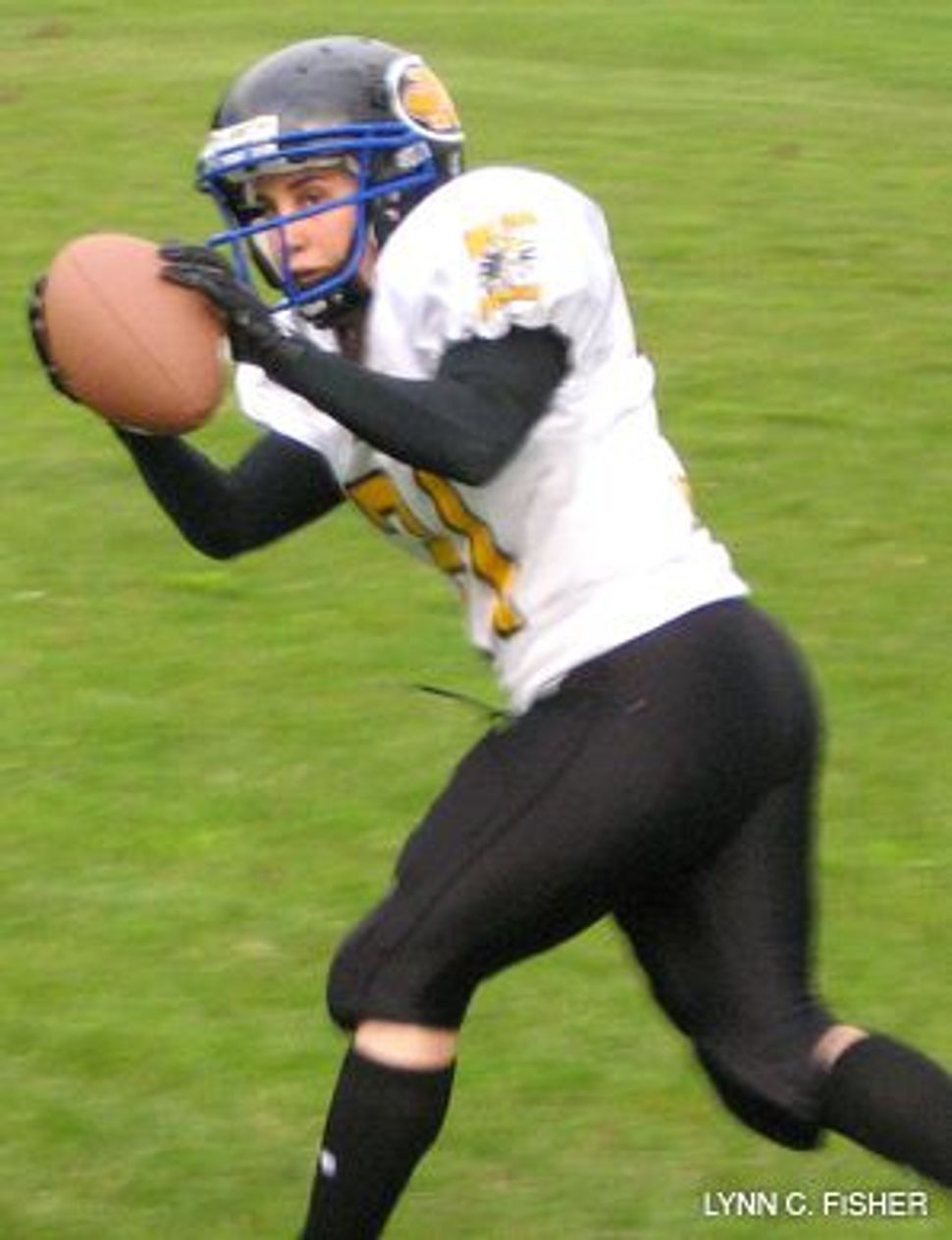 GOOD ARM: Miriam Gable is a running back on the New York Nemesis.

When asked during Seder this year, “Why is this night different from all other nights?” Miriam Gable could have answered, “Because I’m missing the first game of my professional football career.” But there was no bitterness — or uncertainty — that Passover would prevail over her season opener. 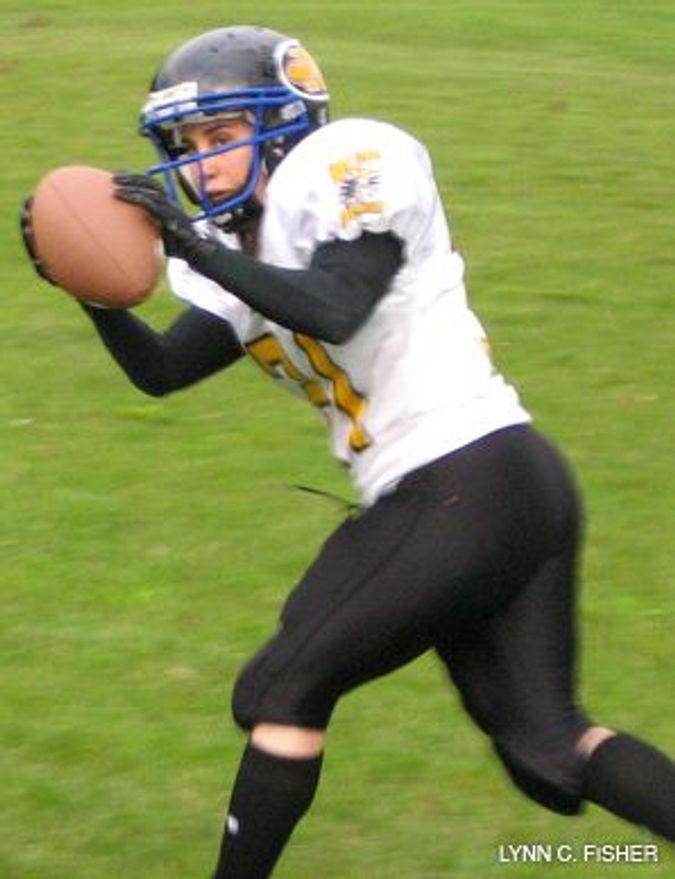 GOOD ARM: Miriam Gable is a running back on the New York Nemesis.

Gable grew up Orthodox, with nine siblings, in Monsey, N.Y., and is a running back for the New York Nemesis. Six weeks into the 10-week season, the team is undefeated (5-0) and has a strong chance of making it to the National Women’s Football Association’s equivalent of the Super Bowl, to be held July 26.

So far, Gable, 25, has scored one touchdown and averaged 6.4 yards on 21 carries. At 5 foot 5 inches tall and 140 pounds, she is unusually strong and “runs through 300-pound girls like they’re not even there,” head coach Andrew Goetz said.

The more daunting challenge for Gable is adhering to Jewish law in a league where all games are played Saturday, women wear pants and the goal is to carry a football on the Sabbath.

“Most Orthodox people would say it’s not in the spirit of Shabbat,” said Gable, who considers herself Modern Orthodox. “I respect that,” Gable said. “I thought about it. I believe rules should be followed strictly, but if I’m not breaking anything, then, I guess I’m allowing myself to be lenient.”

Gable travels to game sites Fridays, finds the hotel closest to the field and makes sure there’s a fence around the stadium (which acts as an eruv — a Sabbath barrier — and permits her to carry things, such as a football, within its boundaries). She then memorizes the route from the hotel to the field, because she can’t carry the map on the Sabbath, and walks as far as five miles to get to the game the next day.

“That’s a lot of dedication to play a sport you’re not getting paid for,” said Goetz, who is also Jewish.

Yet when Gable wouldn’t turn on the locker room lights on game day, players asked, “Is she Amish?” When she asked teammates to carry her equipment, they wondered, “Is she too lazy?”

They soon realized that No. 21 was just being diligent.

At the third game of the season, wide receiver Sandra Nesbitt noticed Gable walking while the team was driving. “I know I ain’t Jewish,” Nesbitt said, “but today, I’m Jewish. I’m walking with you.”

“Gumby [Nesbitt] is blacker than black. Miriam is whiter than white,” said team captain Donna Bruce, who drove by the pedestrians and noticed them engaged in animated dialogue.

“We realized we had a lot in common,” said Nesbitt, a baptized Mennonite who grew up in foster care. “I wanted to learn. It was an honor for me.”

Gable currently lives with her parents in Monsey but hopes to move to Manhattan later this summer. Her father, Ralph, is less enthusiastic about his youngest daughter’s pursuit and has never seen her play, but Miriam has been a tomboy all her life. She requested (and received) a baseball glove for her sixth birthday, and as a youth she would spend hours shooting baskets in her neighbor’s driveway — alone, in a skirt. “I’m totally against this,” Ralph said. “She’s living a life totally different than I would want — but only in this area [of football].”

Gable was a standout student at the Heredi Orthodox all-girls Bais Yaakov in Passaic, N.J., before graduating from Bruriah High School in Elizabeth, N.J., and attended Michlelet Mevaseret Yerushalayim in Israel during the 2001 intifada. When she returned to the United States, Gable attended SUNY Rockland Community College. In 2006 she graudated from Cornell, where, a year later, she earned a master’s degree in health administration. She now works as an analyst at Hewitt Associates, a health management consulting firm.

Gable discovered women’s pro football on Google while at SUNY Rockland. Despite having no instruction, she made the Connecticut Crush team in 2004, but ultimately quit because school left her with little free time.

After graduating from Cornell, Gable sought an outlet for activity and was excited to read about the Nemesis.

“Running back is my personality,” she said. “It has explosiveness; it’s intense. I’m completely fearless. I don’t mind getting hit.”

Hence her father’s greatest concern. “I’m very happy to see that she’s making the effort to keep the Orthodox ways, but I’m not proud of her doing this, because it scares me. I feel this is an error, for physical reasons,” he said.

“I’ve always been doubted,” Miriam said, “even when playing with boys in the community as a kid. For me to play on a professional level without a background of organized sports, I feel good about that. It’s nice to have a group of people who are willing to accept the way I am, too. It’s a great feeling.”

Aimee Berg is a writer living in New York.