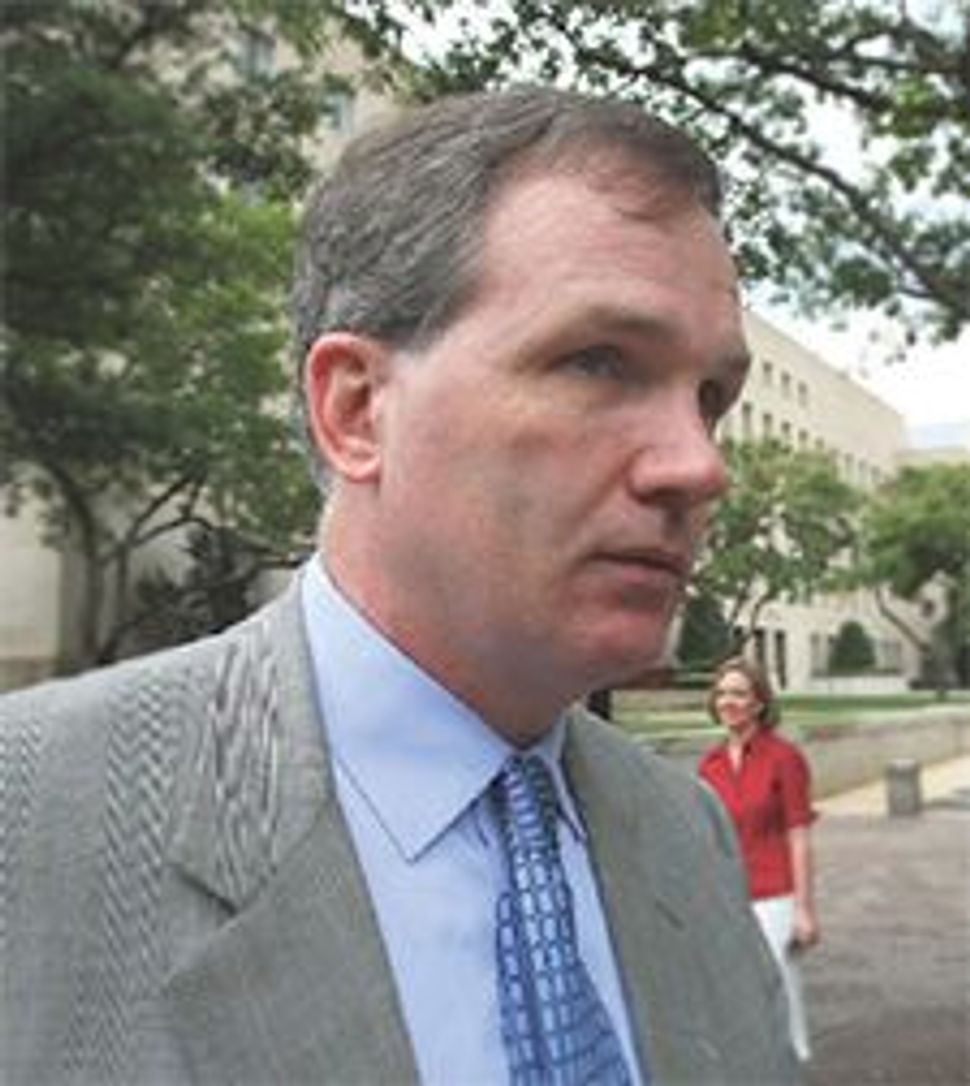 Prosecutor: Patrick Fitzgerald, U.S. Attorney for the Northern District of Illinois, has issued subpoenas to activists in what some suspect to be terrorism-related investigations. The case could be an early test of a recent Supreme Court decision. Image by Getty Images

That?s a question that some Midwestern activists could face as grand jury hearings approach for members of pro-Palestinian and left-wing groups who have received subpoenas in recent months from federal prosecutors. The exact nature of the investigation is unclear, as the office of Patrick Fitzgerald, the U.S. Attorney for the Northern District of Illinois, would neither confirm nor deny the existence of an investigation. But news reports and people familiar with the subpoenas say they appear to be aimed at people who have supported groups designated by the U.S. Department of State as ?foreign terrorist organizations?: in this case, the Popular Front for the Liberation of Palestine and the Revolutionary Armed Forces of Colombia, known as the FARC. 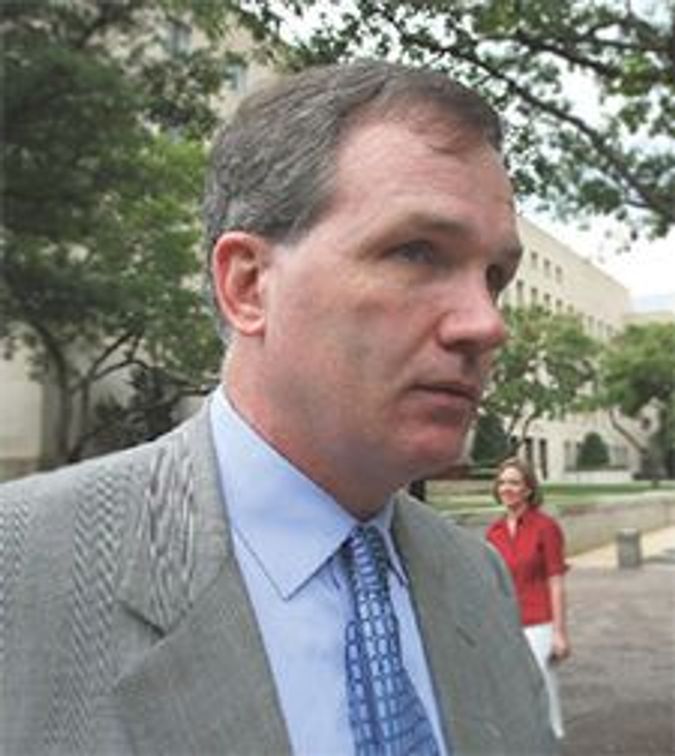 Prosecutor: Patrick Fitzgerald, U.S. Attorney for the Northern District of Illinois, has issued subpoenas to activists in what some suspect to be terrorism-related investigations. The case could be an early test of a recent Supreme Court decision. Image by Getty Images

If the inquiry by Fitzgerald ? known for pursuing a number of high-profile cases, including the prosecution of Dick Cheney aide Scooter Libby in the Valerie Plame affair ? is an investigation into material support for terrorism, it could be the first test case of a new legal regime confirmed by a June 2010 Supreme Court decision. The ruling, Holder v. Humanitarian Law Project, upheld the federal government?s view that material support for terrorism could include speech coordinated with terrorist groups and providing nonviolent training or advice. Plaintiffs contended that this is an overbroad intrusion into First Amendment speech protections.

Search warrants in the apparent investigation were first executed in September. According to Michael Deutsch, a Chicago attorney representing one person called to testify, some of the warrants and subpoenas ask for documents relating to material support for the FARC and the PFLP.

Among the groups that appear to be under scrutiny is the Freedom Road Socialist Organization, a communist group that has published statements by the PFLP on the news website it operates. Lawyers say this group likely violated the material support statute if it coordinated with the PFLP to publish the statements. But one high-profile critic of the current material support law said that it?s not clear that they would be innocent of material support if they independently published the statement after finding it on the PFLP website.

?This is where the gray area is,? said Georgetown University Law Center professor David Cole.

Subpoenas issued in December reportedly included no details on the information requested. Maureen Clare Murphy, an activist called to testify, said her subpoena simply told her to appear at a hearing January 25. She said she believes that the subpoena came as a result of her work organizing ?solidarity delegations to the West Bank.? Managing editor of the pro-Palestinian website Electronic Intifada and an organizer with the Palestine Solidarity Group in Chicago, Murphy said she did not think that her delegations had met with anyone affiliated with the PFLP. She said that she planned to exercise her Fifth Amendment right against self-incrimination.

It?s not yet clear what conduct the grand jury will investigate. But advocates say it could include conduct confirmed as criminal in the Supreme Court?s recent decision in Holder v. Humanitarian Law Project, in which individuals and groups who wished to support the nonviolent activities of groups designated as terrorist by the federal government challenged portions of the material support law. That law bars people from knowingly providing money to groups designated as terrorist organizations by the Department of State, but it also bars providing training, expert advice or assistance, and personnel, among other things, to the groups. The Humanitarian Law Project argued that certain provisions of the law were overly restrictive of speech, association and more. The court found in favor of the government.

?Under the material-support statute, plaintiffs may say anything they wish on any topic,? Chief Justice John Roberts wrote in his majority opinion. ?[T]he statute is carefully drawn to cover only a narrow category of speech to, under the direction of, or in coordination with, foreign groups that the speaker knows to be terrorist organizations.?

Critics of the decision say that it creates peril for activists and others. ?If you?re a cautious lawyer advising people, you?re going to tell activists that they have to be extremely cautious and assume that there?s a chance that they?d get prosecuted for doing advocacy with any degree of coordination? with designated terrorist groups, said Shayana Kadidal, an attorney with the Center for Constitutional Rights who served as the project co-counsel on the Humanitarian Law Project case.

Kadidal said that activists can?t be convicted if they don?t know that they are coordinating with a terrorist group, or if their speech in support of the group is not coordinated with that group.

But in a brief filed in the case, Cole, who represented the Humanitarian Law Project before the Supreme Court, warned that op-ed pieces penned by Hamas leaders and published by The New York Times and other outlets could be prosecuted under the statute.

Op-eds are ?clearly covered by the statute, which according to the government covers any coordinated advocacy, and obviously in order to publish an op-ed by the leader of Hamas you have to coordinate with that leader on editing and the terms of publication,? Cole said in an interview with the Forward.

?The New York Times does not coordinate,? said Neumann, whose group signed on to an amicus curiae brief in support of the government in the Humanitarian Law Project case. ?It editorializes. There?s a difference between coordinating and editorializing,? Neumann said.

Cole conceded that it?s unlikely for the Times to be prosecuted. This underscores the concerns of Kadidal and others that the Supreme Court ruling could open the door to selective prosecution.

And, critics like Cole say, the law is simply too broad. ?It?s very, very sweeping,? he said.

One pro-Palestinian student activist said that he could see material support prosecutions having a chilling effect on his organization?s work. ?I think its impact is going to be tremendous,? said Yaman Salahi, a law student at Yale University and a member of Yale?s chapter of Students for Justice in Palestine. Salahi said that he could see groups like his refraining from organizing book drives for Palestinian schools, for fear that the schools may have members of designated terrorist groups in their administrations.