Considering Both Sides of the Dinar 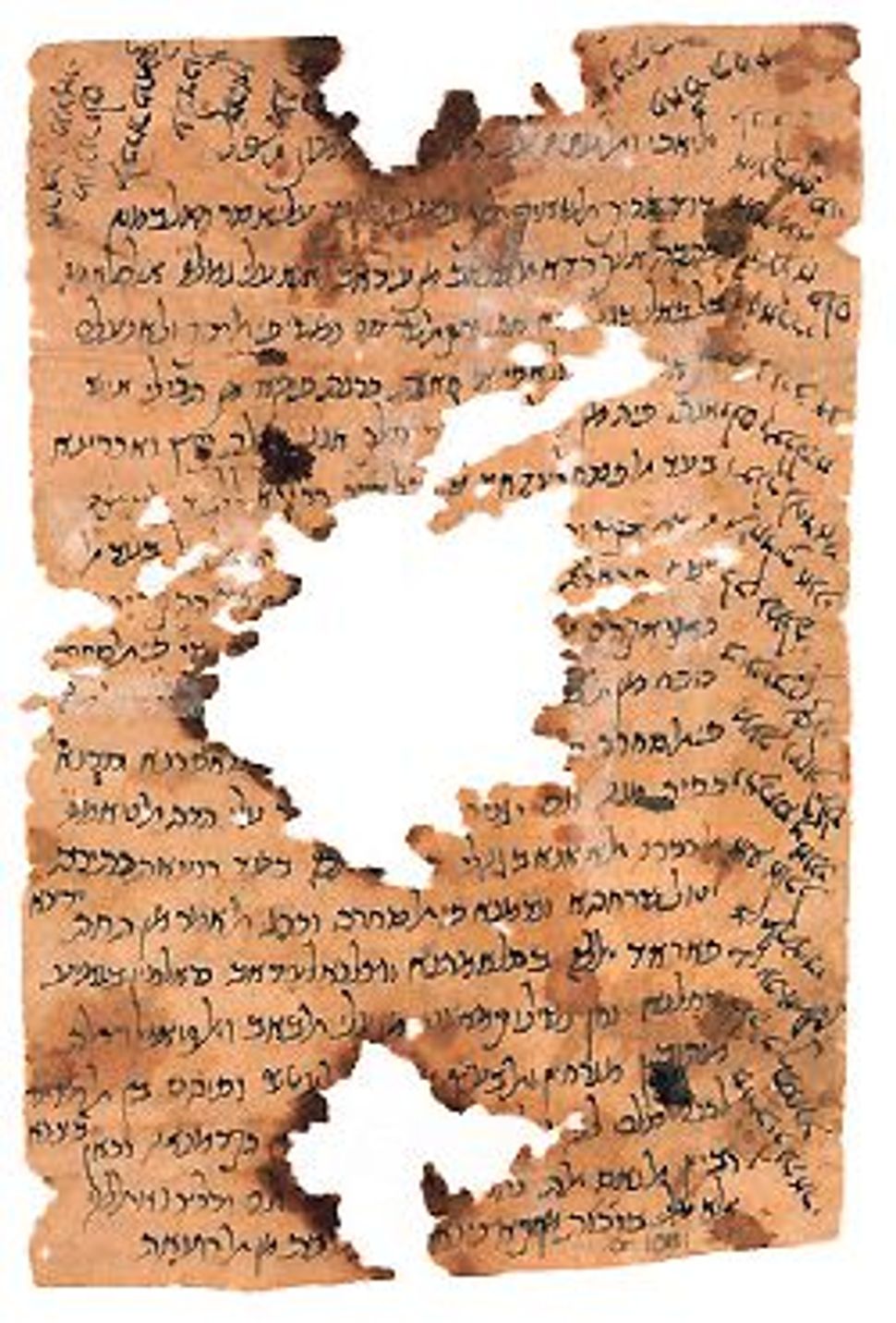 Letter to the Rambam: The final letter that David Maimonides sent his brother, the Rambam, written just before he boarded a boat to begin a doomed sea voyage to India. Image by The Syndics Of Cambridge University Library

A Rabbi in Egypt: Mark Glickman (left) with Gamal Moustafa and a local worker at the Genizah. Image by Courtesy Mark Glickman

IN ISHMAEL?S HOUSE: A HISTORY OF JEWS IN MUSLIM LANDS

It may not appear so at first blush, but Mark Glickman?s book about the Cairo Genizah is a detective novel. The mystery in Glickman?s work lies hidden beneath the entertaining and colorful descriptions of the characters who ?discovered? the thousands of fragments preserved in the ?Genizah,? the storage chamber in the back of the Ben Ezra Synagogue in Fustat (Old Cairo), where the Jewish community had stashed myriad disused documents following an ancient tradition not to destroy the written name of God. 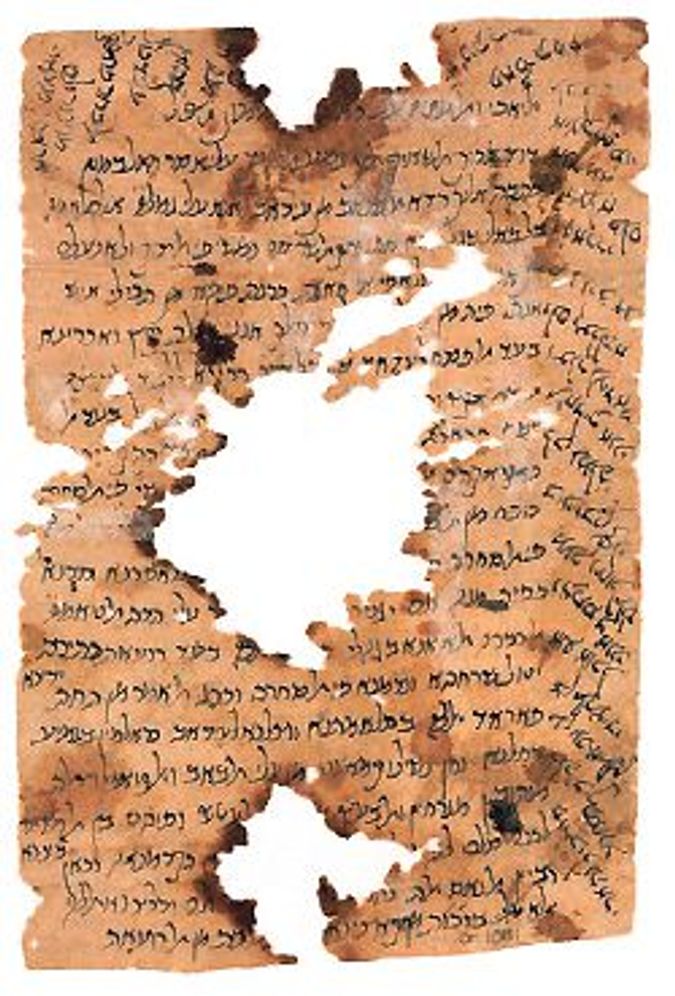 Letter to the Rambam: The final letter that David Maimonides sent his brother, the Rambam, written just before he boarded a boat to begin a doomed sea voyage to India. Image by The Syndics Of Cambridge University Library

Glickman?s characters may have delivered these documentary fragments from the Genizah into the hands of scholars and collectors, but as far as the public imagination is concerned, they might as well have stayed hidden. Unlike the Dead Sea Scrolls, which have captured our attention from 1947 until today, the Cairo Genizah has been consigned to the storehouse of our historical consciousness almost from its discovery in the middle of the 18th century, and Glickman wants to know why.

He does an excellent job of combining the exposition of the limited published work on the discovery of the Genizah documents with the personal and professional correspondence of the primary protagonists in his story. The most colorful of these is, perhaps, the unscrupulous 19th-century rabbi Solomon Wertheimer, who ?once published a Talmud commentary, and, later, realizing that the two halves of the commentary would sell for a better price separately than together, he tore the commentary in half and sold each piece to a different customer.? The scholars he discusses certainly become more prosaic as the field of Genizah scholarship emerges, but the revelations that have emerged from the study of the documents over the past 60 years have not. Indeed, the Genizah has revealed the oldest piece of Jewish sheet music known to exist; a lost sentence from the Talmud; an 18th-century Jewish exorcism, designed to remove the spirit of a dead man from his wife, and even the ?oldest Rabbinic manuscript in the world of any kind.?

In his final chapter, Glickman discusses what he clearly believes to be the next frontier of Genizah studies: the Friedberg Genizah Project, an initiative sustained and championed through the efforts of Toronto businessman, philanthropist and scholar Albert D. Friedberg. This initiative strives to provide broad-based access to electronic images of the Genizah fragments, detailed information concerning their publication and even artificial intelligence software that might join together fragments torn apart 1,000 or more years ago.

Glickman?s story is stimulating, but in his role as aficionado of the Genizah rather than scholar of Genizah studies, he has missed one of the most intriguing challenges to the field (and to the humanities in general) in the Internet age: Are digital photographs of medieval documents the best way to provide access to scholars? Glickman doesn?t mention the Princeton Geniza Project (for which I was senior project assistant during the last decade), whose electronic transcription of some 4,000 Genizah letters and documents can be searched via the Internet, allowing scholars to study individuals and social institutions more easily than ever before. Friedberg?s photographs of the documents are infinitely more pleasing to the eye than Princeton?s wonky transcriptions, but studying Friedberg?s images requires a lifetime of skill in paleography. Princeton?s transcriptions can be searched, indexed and even copied, making the Genizah accessible in a way that the Friedberg Project does not.

Underpinning Glickman?s account of the development of the field of Genizah study, his question persists: Why has the Genizah largely escaped the Jewish communal imagination, beyond a handful of scholars in Israel and North America? His two-part answer merits our attention because it speaks to the unsettling nature of the find: first, ?while the Dead Sea Scrolls testify to a glorious past in the Land of Israel, the Genizah documents paint a vivid picture of Jewish life thriving outside the Land ? and in Egypt, no less!?; and second, amid a contemporary Jewish population that connects to Jewish life through ?the knowledge that the words of the prayer book we recited today are the very same ones that Jews have always recited?. The Genizah, however, shows us that, at least during the Middle Ages, Jewish tradition was anything but monolithic.?

Glickman?s book will be of interest to scholars because of its detail in recounting the development of the field of Genizah studies, but its real appeal ultimately emerges from Glickman?s background as a congregational rabbi in Washington state, striving to reaffirm the plurality of Jewish tradition and Jewish life in the Diaspora.

In Glickman?s concluding pages, the hopes and dreams that his own study of the Genizah has sustained come clear: ?While today it may seem that Jews and Arabs have always been one another?s mortal enemies, the Genizah, of course, paints a different picture.? Glickman might have us study the Genizah as an object lesson in Jewish-Arab cultural symbiosis, fueling optimism for a world in which Jews and Muslims are too busy being involved with one another as business associates to engender inter-communal strife. Indeed, Glickman points out that ?Jews did sometimes experience persecution under Islam. But these incidents tended to be the exception rather than the rule.?

Glickman?s statement brings to mind Martin Gilbert?s new work, ?In Ishmael?s House: A History of Jews in Muslim Lands.? Gilbert is, of course, ?Winston Churchill?s official biographer,? and his expertise in contemporary European history shows itself in this book about life in Muslim lands. Within 100 pages, the author has surveyed Jewish life across some 1,000 years of Islamic history, and prepared the reader for Gilbert?s more extensive discussion of the modern period and the rise of Zionism.

Any survey of such brevity will necessarily lack nuance, but Gilbert somewhat surprisingly digests the traditional narrative of early Islamic history without the skepticism of recent scholarship. Likewise, his broad reliance on a few textbooks and the Encyclopaedia Judaica for much of the first section of the work leads to a retelling heavily colored by a few polemical tracts whose accuracy he accepts without evaluation. Where Gilbert does engage the scholarship, he does so awkwardly: For instance, the debate he adduces between S.D. Goitein and Mark Cohen concerning dhimmi ? that is, the ?Peoples of the Book? ? laws is entirely his own creation, though the degree to which dhimmi laws were enforced throughout history is certainly an issue hotly debated by scholars.

Gilbert?s overarching narrative is nicely explained in his introduction, outlining the fact that Jews experienced both degradation and exaltation under Islam ? though they experienced neither of these to the extent that they did under Christianity. A consummate and accomplished biographer, Gilbert tells his story through the life experiences of individuals. As he explains, the Jews of Arab lands were often educated, acculturated, accomplished and successful; in many cases, though, particularly after the rise of Zionism and eventually the establishment of the State of Israel, acculturation was tempered by laws marginalizing Jews (and Christians), and accomplishments were counterbalanced by seizures of property or even by personal attacks.

The vast majority of Jews of Muslim lands, given these escalating tensions, opted for migration. Not quite dispassionate in his scholarship, Gilbert subtly makes the argument for ?population exchange,? pointing out that some 850,000 Jews were forced to leave Arab lands in the years following Israeli independence, while 726,000 Arabs were made refugees in 1948. He develops this argument further by chronicling recent attempts to bring the suffering of these Jewish émigrés to light.

Ultimately, though, ?In Ishmael?s House? is incomplete because it is largely a history of Jewish-Muslim relations rather than (as its title suggests) a history of Jews in Muslim lands. For instance, the complicated relationship between the Alliance Israélite Universelle movement (which strove to modernize Jews in Muslim lands) and the Zionist movement is given very short shrift; and the discussion of Israel?s immigration and absorption policies in the 1950s shrewdly leaves out any mention of Israel?s so-called ?selective immigration? policy, which kept poor Moroccan Jews from making aliyah and perhaps typified the challenges that Jews from Arab lands faced in a state politically dominated by Ashkenazim.

Israel may have come to the aid of Jewish refugees from Arab lands eventually, but the manner in which it did so is complicated and should have been addressed in a work of this scope and import. Indeed, the increasing attention given to Jews of Arab lands points to the key place that ?In Ishmael?s House? will surely occupy. In light of this, Yale University Press might have been more careful about copy editing and fact-checking Gilbert?s drafts, as myriad typographical and factual errors have found their way into the text.

Despite their limitations ?Sacred Treasure? and ?In Ishmael?s House? are counterpoints to each other: Glickman?s hopefulness in seeing the vitality of Jewish life in medieval Egypt complements Gilbert?s litany of distress and agony reaching back to the rise of Muhammad in the seventh century. Their competing conceptions of history are both accurate, and yet both are somewhat incomplete.

Phillip I. Ackerman-Lieberman teaches at Vanderbilt University. His research focuses on Jewish life in Islamic lands in the medieval period.

Considering Both Sides of the Dinar