Giffords’s Jewish Journey: From Israel To Service and Study 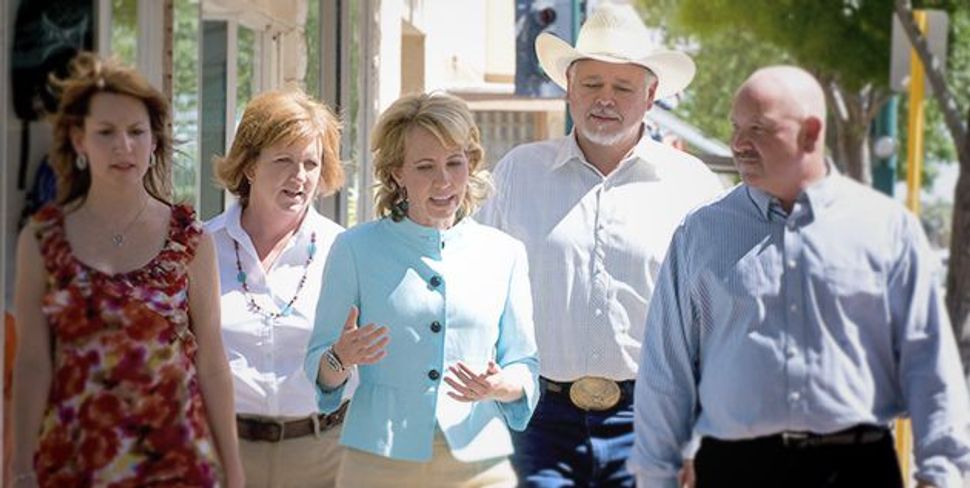 At Home: U.S. Rep. Gabrielle Giffords meets with constituents in Douglas, Ariz., in 2010 Image by Reuters

Rep. Gabrielle Giffords invited her rabbi, Stephanie Aaron, to accompany her to this year’s National Prayer Breakfast, on February 3. Aaron plans to be in Washington for the gathering, but acknowledges she won’t likely be sitting alongside Giffords, her friend, congregant and student.

The third-term Arizona Democrat was shot in the head, targeted while hosting a meet-and-greet with constituents outside a Tucson supermarket. Doctors expect her to survive, but her long-term prognosis remains unclear.

On the day after the shooting, Aaron led a service at Congregation Chaverim for the congresswoman and the other victims of the January 8 rampage in which six people were killed and 14 people were injured.

The congregants sang a series of healing prayers — including the version of “Mi Shebeirach” composed by famed singer-songwriter Debbie Friedman (who coincidentally passed away the day after the shootings). The congregation’s cantorial soloist then sang the words “refuat hanefesh, refuat ha’guf, refuah sh’leima,” Hebrew for “the healing of the spirit, the healing of the body, complete healing.”

The rabbi told the Forward that the message she tried to impart that afternoon was the importance of “recognizing the image of God in each other, and that each person has worth and a value.”

“That’s exactly what Gabrielle is able to do. She recognized, appreciated, celebrated and honored that b’tselem elohim in others,” said Aaron, using a Hebrew word meaning “in the image of God.”

Giffords’s Jewish roots run deep. Her grandfather, the son of a Lithuanian rabbi, was born Akiva Hornstein, and changed his name, first to Gifford Hornstein and, later, to Gifford Giffords to shield himself and his family from anti-Semitism out West.

Giffords grew up in an interfaith family, a daughter of a Jewish father and a Christian Scientist mother. Her interest in Judaism was heightened during her first trip to Israel, in 2001 — shortly after the September 11 terror attacks and at the height of the Second Intifada. The trip was sponsored by the American Jewish Committee’s Project Interchange, which sends politicians, journalists and opinion leaders to meet with their counterparts in the Jewish state. At the time she was a member of the Arizona state legislature.

“It was a profound experience [for me] to reconnect with that philosophical approach to life and to humanity, and to look at the big picture and understand our interconnectedness,” Giffords said in a 2007 interview with Jewish Woman Magazine. “I was raised not to really talk about my religious beliefs. Going to Israel was an experience that made me realize there were lots of people out there who shared my beliefs and values and spoke about them openly.”

The former mayor of Gahanna, Ohio, Jim McGregor, who was on the same trip to Israel, recalls Giffords’s enthusiasm for the wide range of people and places the group encountered — from meeting with members of the Knesset to visiting Israel’s border with Syria to hearing, firsthand, about challenges faced by Israel’s Arab population.

“Many people on the trip learned a great deal and enjoyed themselves, but they weren’t probing,” McGregor said. “But Gabrielle was probing; she was always asking questions.”

While in Israel, the group visited a Jerusalem plaza, where a deadly suicide bombing had taken place days earlier. “To think that just a decade after we were there to see the grieving of the people there, she’s been attacked with lethal force by the same kind of irrational hatred — it’s hard to believe,” McGregor said.

Giffords later wrote an account of her trip, in which she traces the Mideast conflict back to 1947, “when the Arabs rejected the [U.N. partition] plan which the Jews accepted,” and said that Israel’s peace efforts have been met with “a campaign of violence and terrorism.” She also criticized then Prime Minister Ariel Sharon’s hard-line approach to relations with the Palestinians, and called his 2000 visit to the Temple Mount “deliberately provocative.”

But that trip to the Jewish state — “a land of contradiction, of complexity and simplicity,” as she called it — proved to be transformative.

After she returned, she became a member of Congregation Chaverim, which is known in Tucson’s Jewish community (estimated in 2002 to number some 22,400) for its casual vibe and open-minded members. “Our synagogue is a little ragged around the edges, and we like it that way,” said Dan Hofstadter, a member of Chaverim’s board. “It’s not flashy; it’s not showy. People come to services in shorts and T-shirts, and in the winter in blue jeans. No one in the congregation has a title or a last name. Gabby is just Gabby.”

Giffords also met one-on-one, every few months, with Rabbi Aaron. “She would ask me whatever she wanted to know about Judaism, about living a Jewish life,” Aaron recalled. The rabbi would frequently cite the Five Books of Moses and the Talmud, sometimes pointing out to Giffords the specific passages that she was referencing. (Those study sessions tapered off after Giffords was elected to Congress, but she remained close with Aaron, and frequently invited the rabbi to give the invocation at local events where she was speaking.)

About eight years ago, Giffords decided to have a formal Hebrew naming ceremony, at which she took on the name “Gabriella.” Several years later, Aaron officiated at Giffords’s marriage to NASA astronaut Mark Kelly. Although the groom isn’t Jewish, Aaron said the two had a “traditional Jewish wedding, with a very beautiful chuppah.”

Asked what drew Giffords to Judaism, Aaron said that the congresswoman seemed to be moved by the notion of “tzedek, tzedek, tirdof” — or the Jewish pursuit of justice. She also said that the way Giffords approached public service seemed rooted in Jewish values.

“She could speak to a baby, as well as to a 92-year-old individual who could barely walk — that’s the presence she has,” Aaron said. “It’s like when we say, ‘Shema Yisrael,’ the idea of ‘I hear you; I listen to you.’ That is one of the strongest aspects of her soul.”

Giffords’s Jewish Journey: From Israel To Service and Study