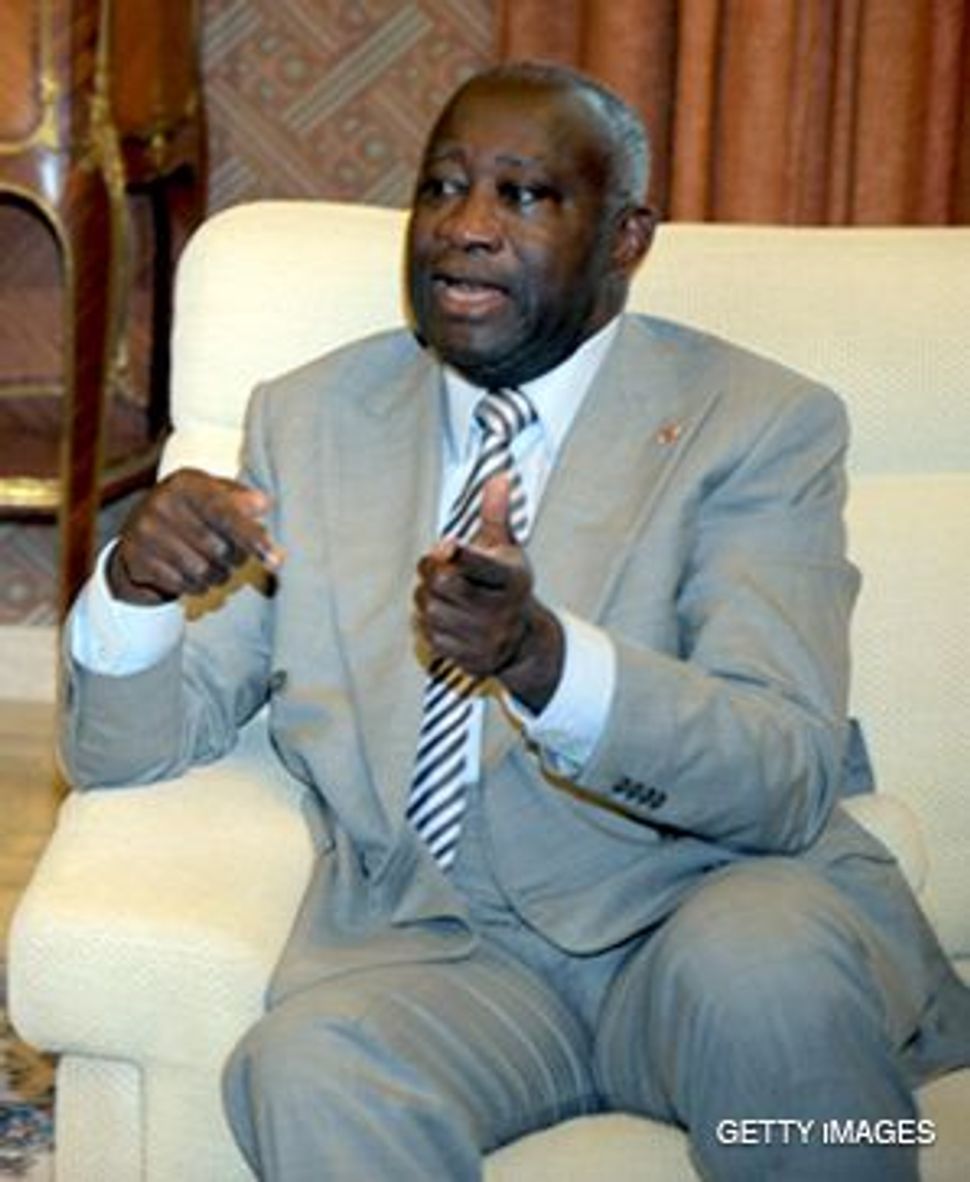 GBAGBO: Obama ?has done more for black Americans than all black activists put together.?

When his hold on power was teetering a few years ago, Cote d’Ivoire president Laurent Gbagbo reached out to an unlikely ally: Israel. 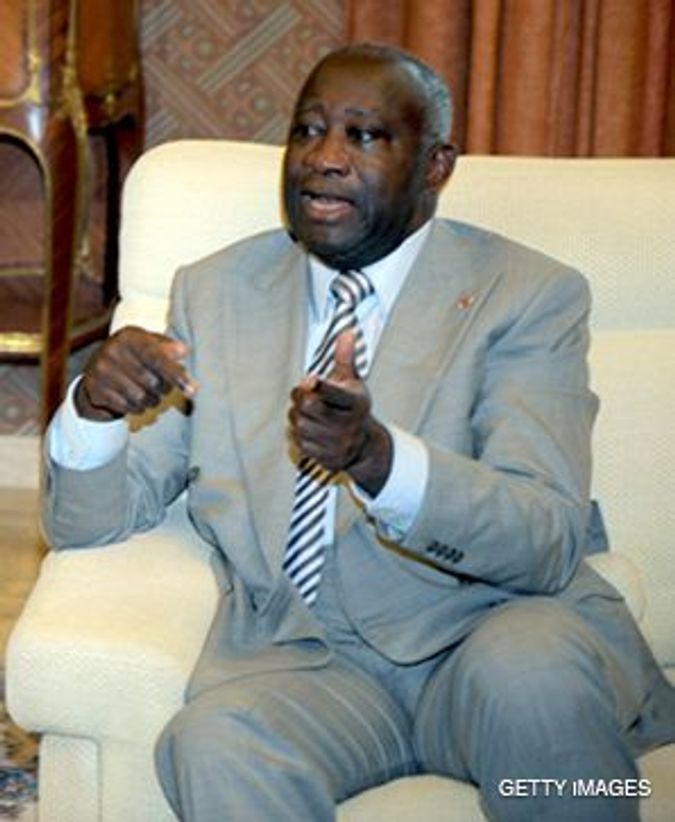 GBAGBO: Obama ?has done more for black Americans than all black activists put together.?

Once West Africa’s wealthiest country and the world’s leading producer of cocoa, Cote d’Ivoire plunged into a bitter civil war in late 2002 when insurgents, backed by the former colonial power, France, took up arms against the recently elected Gbagbo.

After the United Nations mandated that France restore peace and security, Paris and Gbagbo locked horns repeatedly until a fragile power-sharing agreement was reached last year. A long-delayed presidential election is slated to take place at the end of this year.

In the midst of all this bickering with France, Gbagbo was able to count on Israeli intelligence and security support. When France began destroying Israeli drones, French officials had informal discussions with Israelis, asking them to stay away from France’s former African territories.

Gbagbo, who was elected in late 2001, is a Christian and he has used his Evangelical faith, and his staunch support for Israel, to garner support in his face-off with France.

Taking a break from a series of meetings at the United Nations last month, Gbagbo agreed to sit down in a suite at the Waldorf-Astoria hotel in Manhattan to talk about Israel, Evangelicals and Barack Obama.

Q: You openly profess your attachment to Israel. Why? Many African countries often prefer to side with the Arab world in the name of third-world solidarity.

A: Although I was his opponent for many years, I have on this issue followed the footsteps of Felix Houphouet-Boigny [the first president of the country after the independence from France]. He had a good relationship with Israel over all those years. I first went to Israel for one week in 1992 when Rabin was in power, at the invitation of the Labor Party. Through the Socialist International [a confederation of social-democratic and labor parties], I had the privilege of meeting Shimon Peres, an exceptional man. Initially, I didn’t know much about the underlying issues of the Israeli-Palestinian dispute. But we were lucky because at our meetings, Peres always came with Yasir Arafat and they spoke one after the other. So there was no favoritism and we could not be accused of being manipulated by one or the other. I became very friendly with Peres. Arafat, for his part, was holding two parallel discourses and this turned out to be pathetic for him and his cause. I remain close to Peres. He invited me for his 80th birthday; I couldn’t go but I sent my wife.

So we have a good relationship, which is strengthened by an Israeli ambassador who is a man of goodwill. However, I think we aren’t fulfilling all the potential we have, partly because of the civil unrest we have had in recent years. But with the skyrocketing commodity prices, we’ll call upon Israel to help us with agriculture output.

Q: In addition to political or economical relations, Israel also supported you when France turned against you several years ago.

A: Yes, Israel supported us like you support friends. But it was not with weapons as my enemies have alleged. For instance, we bought from Israel unmanned planes, the infamous drones, to collect intelligence. Let me make clear that those are non-offensive weapons which are very helpful for information-gathering. Israel could have refused to sell them but they accepted and it helped us in many ways.

Q: The French were not happy about thisΙ

A: It is not by accident that the first thing the French troops did when they intervened was to destroy the drones.

Q: Does your Evangelical faith play a role?

A: Certainly, because a man is a whole and you can’t slice him like sausage. One can’t separate the believer from the politician. I inherited two things from my parents: Christianity and socialism. The only change is that I am an evangelist and I used to be a Catholic, but it’s the same faith. But this has nothing to do with my relationship with Israel. I should add that many of my fellow countrymen now go on a pilgrimage to Israel.

Q: Does the United States care about your country?

A: In general, the U.S. does not intervene here because there is an unspoken Yalta deal whereby the French have the first and the last word when it comes to their former colonies. However, this is beginning to change and the U.S. played a key role in blocking a French resolution at the U.N. Security Council that would have changed our constitution in order to prevent me from running again for president. The weight of the U.S. was fundamental in this attempt to steal the sovereignty of a member state and I am very grateful for this. The U.S. ambassador to Cote d’Ivoire simply told reporters that for Americans, the constitution is sacred and that was it.

Q: Is there an Obama-mania in Africa?

A: Mania I don’t know but a good deal of interest. He is the third American man after John Kennedy and Bill Clinton to give me the same feeling during the campaign. He brings freshness and he already has done more for black Americans than all black activists put together, be it Martin Luther King, Malcolm X or Mohammed Ali. Without uttering the word “black,” he has done more than all of them. Whether he will be elected or not is for Americans to decide. But the part of his contract that concerns Africa has been fulfilled. One can no longer look at a black African or a black American like before in the United States and this is very important.

Q: What do you mean?

A: We had black Americans in high positions like Andrew Young, Jesse Jackson, Colin Powell, Condoleezza Rice, who is also a woman. But today, Obama’s candidacy and the way it is conducted brings a strong respectability to immigrants, recent and old. This is not a folk candidacy. He has put the flag of black Americans at the highest levels of American politics.