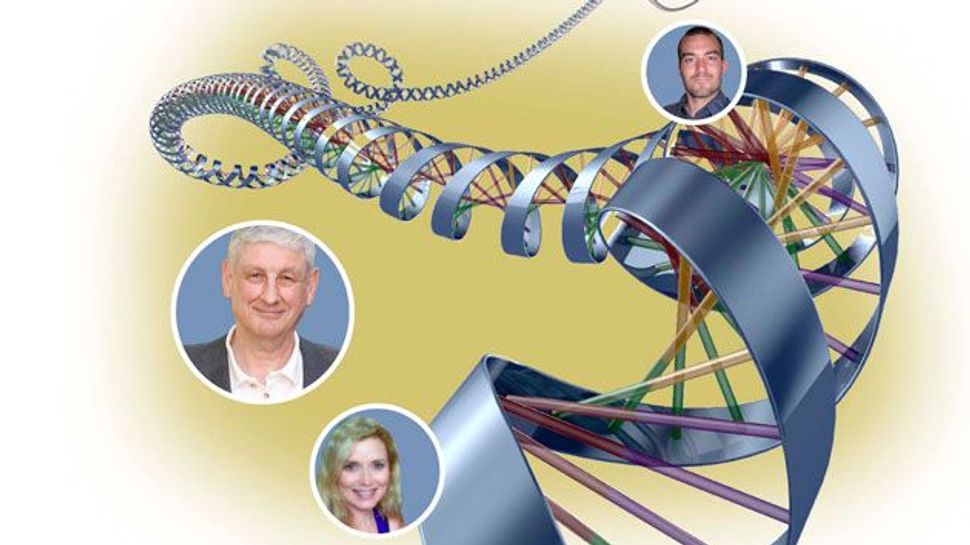 Last April, Joseph Pickrell sent a tube of his saliva to the California genetic testing company 23andMe. After spending years studying other people’s DNA, the 27-year-old doctoral student at the University of Chicago decided he wanted to learn more about his own genetic ancestry.

When the results came back, they showed that Pickrell was largely of Northern European descent with a bit of Mediterranean blood in the mix. At the time, “I just thought, that’s about right,” Pickrell said.

Together with 11 friends and colleagues who had completed the same test, Pickrell then ran his genetic profile through a computer algorithm designed to tease apart genetic lineages more precisely. Strangely, the analysis suggested that two people in the group were of Ashkenazi descent: New York-based attorney Dan Vorhaus and Pickrell. This finding made sense for Vorhaus, a Jew who grew up in the Bay Area. But for Pickrell, who was raised Catholic in Chicago’s northern suburbs, it came as a shock.

Pickrell turned to his mother. “She said, ‘Wait a second, hold on; this rings a bell,’” Pickrell recalled. She made a few phone calls, and pieced together information: Her father’s father — Pickrell’s maternal great-grandfather — had been raised Jewish in Poland before moving to the United States, where he married a Catholic woman and left his Jewish upbringing behind.

“It’s amusing that using genetics, I could wrestle this out of the bushes,” Pickrell said.

DNA tests to uncover Jewish origins have been offered for decades by companies such as Houston-based Family Tree DNA and DNA Tribes of Arlington, Va. They have shown, for example, that many Hispanic Americans likely descended from Jews who were forced to convert or hide their religion more than 500 years ago in Spain and Portugal. Yet although standard ancestry-testing platforms can point to centuries-old Jewish origins, none would have flagged Pickrell’s relatively recent Semitic pedigree.

That’s because most DNA tests have traditionally relied on only two small parts of the genome: the Y-chromosome, which is passed down almost unchanged from father to son, and mitochondria, which mothers pass faithfully to their offspring. Because these stretches of DNA remain relatively consistent from one generation to the next, they are particularly useful for testing direct-line paternal and maternal ancestry, respectively; however, they essentially ignore the bulk of someone’s DNA ancestry and cannot detect genetic signatures that cross gender lines.

But the test that 23andMe offers is different. Available commercially for only a few years, it measures close to a million single “letters” of DNA smattered across the whole genome to reveal ancestral origins of, and risk factors for, almost 100 diseases. And with the $99 sale price the company was charging for the test in December — much less than similar tests — more people have been rushing to use the service and are getting surprising results.

According to 23andMe geneticist Mike Macpherson, about 2% of the 40,000 people of non-Ashkenazi European descent who have used the company’s platform show some reliable signature of Ashkenazi heritage in their DNA.

CeCe Moore, a 41-year-old amateur genealogist who runs a television production company in Orange County, Calif., is one such customer. In 2008, Moore tested her mitochondrial DNA and her father’s Y chromosome, but found no traces of Jewish heritage. Then, last year, she obtained her DNA readout from 23andMe and learned that a small but significant amount of her genome appeared to be of Ashkenazi origin.

Because she always hung out with a mostly Jewish crowd, “people used to think I was Jewish,” said Moore, who was raised as a Jehovah’s Witness. “So it’s funny to find that although it’s pretty far back, there’s something there.”

But Richard Villems, a molecular anthropologist at the University of Tartu, in Estonia, who studies genetic origins of Jewish communities, cautions against jumping to conclusions based on DNA alone, especially because the further back one goes in ancestry, the weaker the genetic signals become. “I bet that no such claim [of Jewish origins] will stand in the courtroom,” he said.

Although someone’s genetic data can hint at Ashkenazi origins, it’s impossible to rule out the chance of a long-lost ancestor with non-Jewish Middle Eastern roots, he said.

Unless, that is, there is corroborating evidence. Since Pickrell received verification that his great-grandfather was Jewish, “then it fits,” Villems said. “Without such a known family record, just typical genotyping would not have been enough to identify this ‘drop of blood’ as Ashkenazim.”

Pickrell said he has no plans to start going to synagogue. And since “genes do not define the Jews,” according to Edward Reichman, an Orthodox rabbi and physician at Yeshiva University in New York, the Jewish community at large probably won’t embrace him, either. But according to Bennett Greenspan, president and CEO of Family Tree DNA, many people who learn of Semitic ancestry through DNA often end up converting to Judaism.

Elliot Dorff, a conservative rabbi and ethicist at American Jewish University in Los Angeles, welcomes these conversions. “We would really want to encourage such people to rediscover their Jewish roots,” he said. Although people who find Jewish origins through DNA are not strictly Jewish, halachically speaking, Dorff noted that many people in this situation already feel a deep-seated connection to the religion.

Regrettably, not everyone has living relatives to corroborate the findings of DNA testing. Rick Voss, a 66-year-old Atlanta-based lawyer, always suspected that his paternal grandparents might be Jewish, and last year the results of 23andMe’s kit indicated that Voss himself was half-Jewish. But since both Voss’s father and grandparents died decades ago, he can’t ask them for more details. “That kind of confirmation is completely unavailable,” said Voss, who grew up attending a Protestant church in the Chicago area. Nonetheless, Voss noted, discovering through his DNA that he probably has Jewish roots “has some psychic meaning.”

Fortunately for Pickrell, he managed to secure more concrete answers to his personal odyssey through family oral history. He is quick to note, however, that had no elders been alive to confirm the DNA-based findings, “in another generation this information would have been essentially lost.”

Elie Dolgin is a news editor with Nature Medicine in New York.