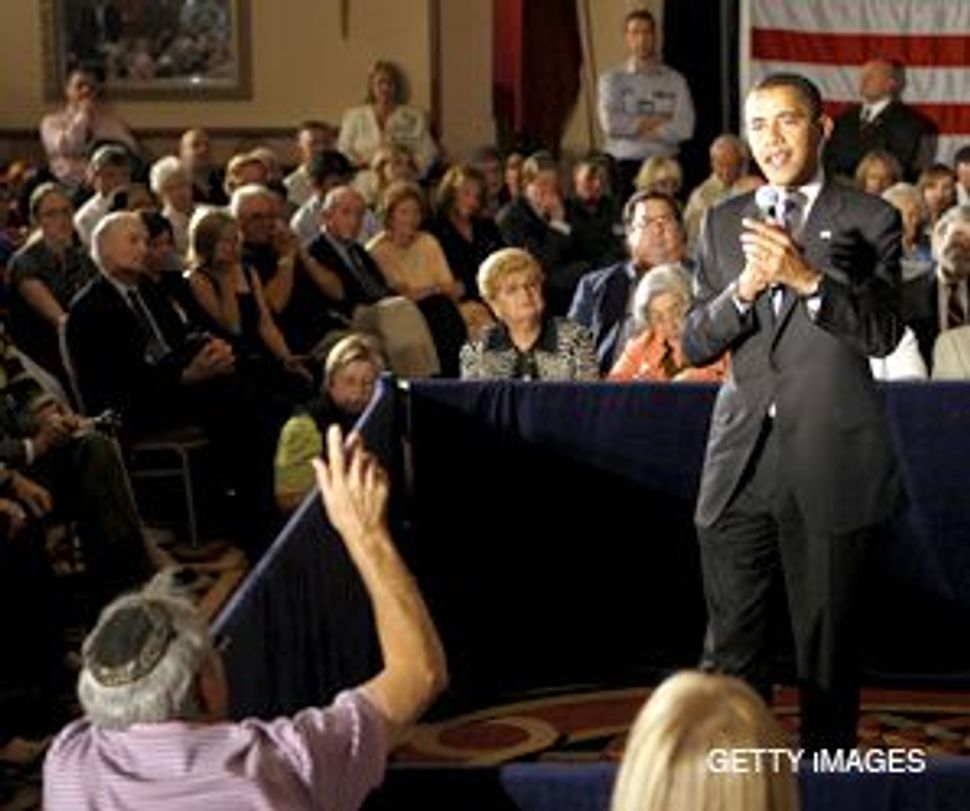 THE JEWISH QUESTION: Democratic presidential hopeful Barack Obama tried to allay concerns about his ability to win over Jewish voters with appearances like a May 22 town-hall meeting at B?nai Torah Congregation of Boca Raton in Florida.

From the avalanche of articles and commentaries published by mainstream media outlets in recent weeks, one might easily get the impression that Barack Obama is in trouble with Jewish voters. 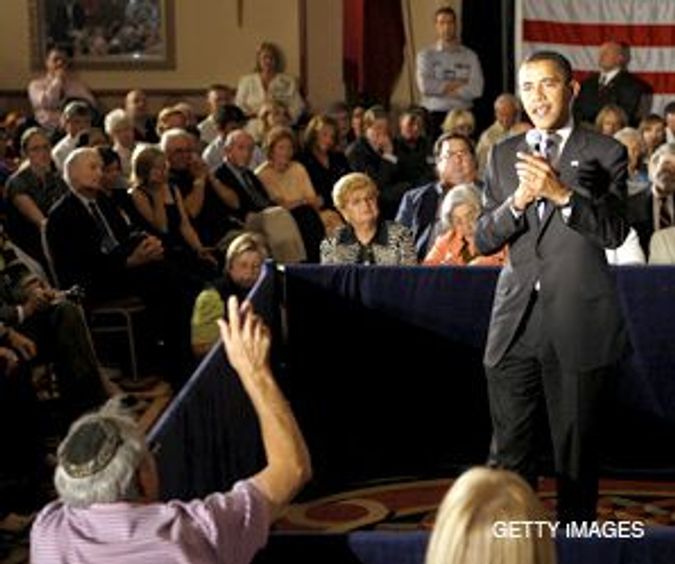 THE JEWISH QUESTION: Democratic presidential hopeful Barack Obama tried to allay concerns about his ability to win over Jewish voters with appearances like a May 22 town-hall meeting at B?nai Torah Congregation of Boca Raton in Florida.

As the Illinois senator — now the Democrats’ presumptive presidential nominee — turns his attention to November, the national media has closely followed his overtures to the Jewish community, long a bedrock constituency for Democrats.

When Obama headed to South Florida recently, the media narrative that emerged focused on what was characterized as his uphill battle with the state’s Jewish voters, many of them elderly. The New York Times, in a front-page story appearing May 21, catalogued the anxieties — which ranged from Israel and Iran to race and antisemitism — circulating in the Jewish community, along with falsehoods like “Obama is an Arab” and “Al Qaeda is backing him.” (Reporting on the Times story, a Croatian Web site, Javno, summed up the situation under the more-than-dubious headline “Ku Klux Klan Supports Obama, Jews Do Not.”)

But as the discussion of Jewish ambivalence toward Obama reaches new levels of intensity, some observers are saying that the hand wringing is creating a skewed and potentially damaging picture of American Jewry whose support for Obama is, by several measures, quite strong.

“Enough,” wrote M.J. Rosenberg, director of policy analysis for the dovish Israel Policy Forum, in a May 23 column on the Web site Talking Points Memo. “The ridiculous focus of the media on the candidates’ pandering to Jews is bad for Jews.”

“Jews have always been more progressive on matters of race than most other whites,” he added. “But that does not mean all of us are. We have our racists. So does every other group.”

The fate of the “Jewish vote” has, by now, become a perennial election-year topic, and its general outlines are drawn from undeniably relevant political facts: Except for Jimmy Carter in 1980, no Democratic presidential candidate has failed to win over a majority of American Jews since at least 1928. With a higher-than-average propensity for voting and concentration in such swing states as Florida and Pennsylvania, American Jews have often made a difference in national campaigns. The GOP, meanwhile, has courted the community aggressively in recent years, with debatable impact: According to a 2006 survey conducted by the American Jewish Committee, 15% of American Jews now identify as Republican and nearly 30% consider themselves independent. President George W. Bush captured 22% of the Jewish vote nationwide in 2004, and John McCain — buoyed by his long pro-Israel record and by campaign support from close friend Joe Lieberman — is hoping to capture the highest share of the Jewish vote by any Republican presidential candidate since Ronald Reagan, who earned 39% of the Jewish vote in 1980.

That said, given that many demographic groups — from soccer moms to Nascar dads to working-class whites — have a way of making a difference in elections, some political observers have wondered whether the recent focus on Florida Jews is contributing to a public misconception about which religious groups are likely to be the most significant swing voters. William Galston, a senior fellow at the Brookings Institution who has studied the impact of Catholics in recent elections, is among them.

“I think it is fascinating that there has been so much attention focused on the two religious groups that are part of the base of the two political parties — evangelicals for Republicans and Jews for Democrats, and relatively little attention lavished on the two big swing groups, namely, Catholics and mainstream Protestants,” said Galston, a former adviser to Bill Clinton, in an interview with the Forward. “I can pretty much prove that it was an outpouring of Catholics in Ohio and Florida that pushed [President George W. Bush] over the top in 2004.”

Statistics show that Jews are one of Obama’s strongest white constituencies — a key base the Illinois senator is working overtime to shore up, rather than a uniquely problematic weak spot.

While Catholics, for example, have supported Hillary Clinton over Obama to a greater degree than white primary voters overall, Jewish voters have actually been more supportive of Obama than whites in general in seven out of eight primary states with significant Jewish populations — Florida included. (In New York, Clinton’s home state, Obama’s share of the Jewish vote lagged four percentage points behind his performance with white voters.) Moreover, a Gallup Poll released in May showed that 61% of Jewish voters nationwide prefer Obama versus 32% for McCain, compared with a margin in the general population of 45% to 43%.

Given this broader picture, some members of Florida’s Jewish community worry that the focus on Jewish voters in recent weeks had created a false impression that Jewish voters are uniquely critical of the man overwhelmingly likely to be the country’s first African American presidential nominee, when in reality Obama is reaching out to Jews in order to shore up a cornerstone of his base.

“The [May 21] Times story showed a Jewish populace that is uninformed and fearful,” said Rabbi David Steinhardt, the host of Obama’s recent visit to B’nai Torah Congregation of Boca Raton, Fla. “The majority of my congregants are much more thoughtful and open to the truth than what we saw in that story.”

Others worry that the media coverage has given the impression that Jewish voters care only about Israel.

“There are so many of us who care profoundly about Israel and just as much about America,” wrote Boca Raton resident Myriam Weinstein in a May 22 letter published in the Times. “As a 60-plus Jewish resident of Boca Raton, Fla., who is deeply committed to Israel, I refuse to be identified and pigeonholed with all the people who fit my demographic profile and whom you quoted in your article about Jewish voters in Florida.”

Larry Sabato, a professor of politics at the University of Virginia, said the copious coverage of Jewish voters in recent weeks reflects the fact that “elections are won at the margins” and that even a relatively small number of Jewish voters could make a difference in swing states like Florida. But he cautioned against putting too much stock in fears voiced during the waning days of the primary campaign.

“What happens in May and what happens in November are two different things,” Sabato wrote in an e-mail to the Forward. “Many defectors, Jewish and otherwise, will return to the Democratic fold by November.”