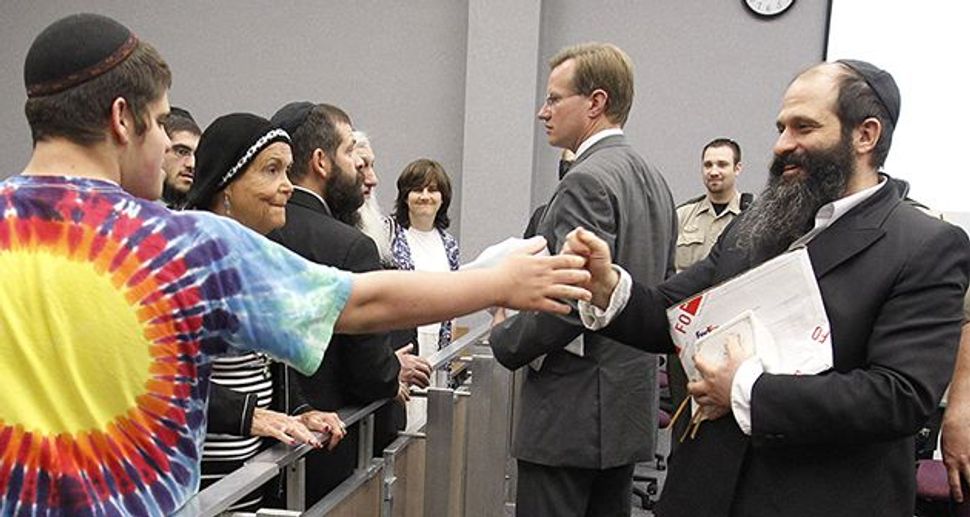 Judgment: Sholom Rubashkin said hello to his 16-year-old son, Moishe, as he entered the courtroom last June in his child labor trial, in which he was acquitted on all charges. Image by Matthew Putney

Sholom Rubashkin has never lacked for passionate defenders, but he surely never thought the ACLU would one day be among them.

The former executive of the now-defunct Agriprocessors kosher meat company is serving a 27-year sentence without chance of parole after being convicted last June of bank fraud in a case that began with a massive immigration raid on his Postville, Iowa, meatpacking plant.

Now, three civil and legal rights organizations — most notably the American Civil Liberties Union — have filed amicus curiae, or “friend of the court,” briefs in support of Rubashkin and his demand for a new trial, soon to be heard by the 8th Circuit Court of Appeals.

What has united the three groups is the behavior of the U.S. District Court judge in the case, Linda Reade. Rubashkin’s defense team has argued repeatedly that Reade was unfit to judge the case because of her involvement with preparations for the initial raid on Agriprocessors, which it sees as collusion with the prosecution — an argument that is made in the briefs.

“This judge was involved with the prosecution long before there was a defense to challenge from the other side,” said Randall Wilson, ACLU of Iowa’s legal director. “This immediately gave the appearance of unfairness. I don’t know how you overcome that besides taking the judge out of the equation.”

In addition to the ACLU, the Washington Legal Foundation and the National Association of Criminal Defense Lawyers also filed briefs with the court in the second week of January.

Reade has not commented directly on these charges against her impartiality, except to say last year that she was involved with the raid only to the extent of offering limited “logistical cooperation.” A court filing by Assistant U.S. Attorney Peter Deegan Jr. in August, arguing against granting Rubashkin a new trial, elaborated on this point.

“In order to plan for hundreds of criminal prosecutions, the Court needed to be contacted at the earliest opportunity to determine whether the Court could handle so many prosecutions at once and, if so, when,” Deegan wrote. “The Court needed several months to plan for its role in the operation. There is nothing about the timing of the notification to suggest anything nefarious.”

But in memos and e-mails obtained by Rubashkin’s defense team through a Freedom of Information Act request, and cited in its appeal, a different picture of Reade’s involvement presents itself, according to the ACLU.

The ACLU contends that Reade began meeting with prosecutors 10 months before the May 2008 raid; that she surveyed the National Cattle Congress grounds in Waterloo, where the hundreds of illegal immigrants would be detained following the raid, and that she asked in e-mails for a “final game plan” for the raid and for a “briefing” on the operation. Most damning, according to legal experts, is that she strategized with the prosecution and even preapproved the plea offers proposed for Rubashkin’s workers.

“Judges should not be so closely involved with the prosecution,” said Ronald Rotunda, a professor of jurisprudence at Chapman University who wrote the brief for the National Association of Criminal Defense Lawyers. “A natural reading of the e-mails gives the unfortunate conclusion that the judge, having been invested in this elaborate raid, felt she had to have something to show for it.”

Rubashkin’s chief defense attorney, Nathan Lewin, said he was “gratified” by the support he was getting in these briefs and that these organizations “saw the importance of this case and the injustice that had been committed.”

Rubashkin’s family also felt vindicated. A friend and adviser to the Rubashkins, Postville-based Chabad rabbi and former city councilman Aaron Goldsmith, said that Leah Rubashkin, Shlomo’s wife, was happy that a neutral party had gotten involved on their side.

“The ACLU has in many cases been against the Lubavitch community over the religion-state issue,” Goldsmith said. “That is their reputation among us. So it is a beacon of clarity to hear them say that injustices have happened. It gives it a lot more weight and credibility. It’s not like you can buy off the ACLU.”

For its part, the ACLU still sees in Rubashkin someone who exploited illegal workers and underage labor, Wilson said. But the union sees these as separate issues from the matter of legal principle argued in its brief.

When the arrests were made at Agriprocessors, it was the largest federal raid in American history thus far, with 389 workers detained for not having documentation. Rubashkin was also accused of violating child labor laws. He was acquitted, however, of the latter charges in a state trial last June. Federal prosecutors deferred prosecuting Rubashkin on charges of employing illegal immigrants, pending the outcome of the bank fraud case. Rubashkin was convicted in that case of misrepresenting his company’s financial situation in order to continue receiving loans. The government is not expected to pursue immigration charges in light of Rubashkin’s sentence.

“We are used to representing people who don’t play well in front of all audiences,” Wilson said.

Even groups that have been opposed to Rubashkin’s labor practices for years see in the amicus briefs grounds for questioning whether something improper occurred during his trial.

Jane Ramsey, executive director of the Chicago-based Jewish Council on Urban Affairs and a frequent critic of Agriprocessors, said that Reade’s involvement does seem to “color justice.”

This story has been changed to correct an error in the original version in which Sholom Rubashkin was described as having been “acquitted” of the charges against him for employing illegal immigrants. The government deferred these charges with the option of pursuing them later, pending the outcome of his bank fraud case.