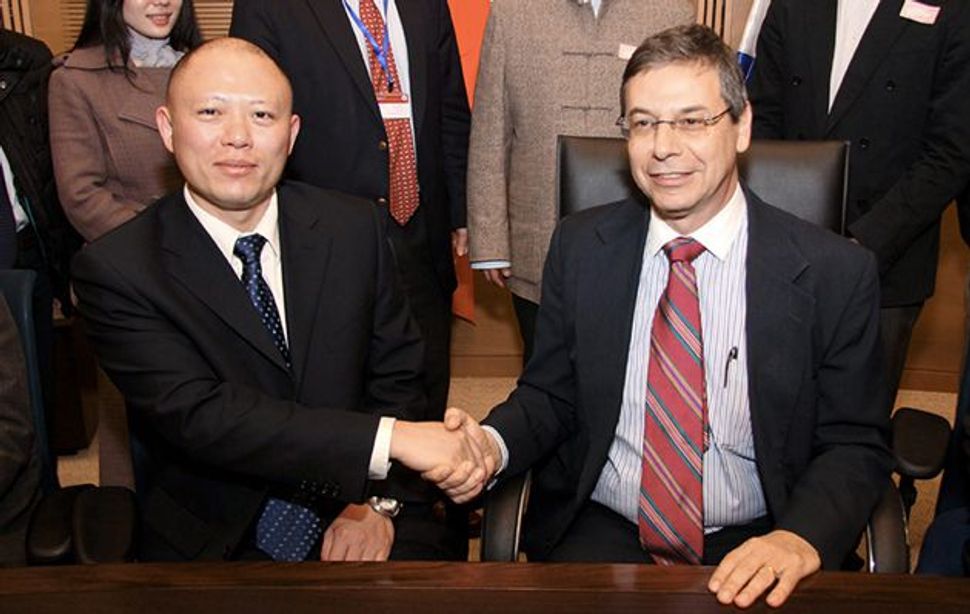 Back in 1991 Chen Yiyi was, as he puts it, a “bored” law student at Peking University. At the time, China was in the process of formalizing relations with Israel, and the Chinese Education Ministry and Israel’s Foreign Ministry selected his university as the site of China’s first Hebrew course taught by visiting Israeli teachers. When the class fell short of its eight-student enrollment target, Chen was persuaded to sign up to boost its numbers.

Little did Chen know at the time that he was embarking on a career in what would soon be a burgeoning field within Chinese academia: Jewish studies.

Chen, who is now director of Peking University’s Institute of Hebrew and Jewish Studies, teaches a Bible course at his school that is billed as a class in Tanach, using the Hebrew word for the Bible and drawing upon Jewish interpretations. Now in its eighth year, the class can accommodate a maximum of 200 students each session, but it regularly has 500 students sign up.

Chen — whose accomplishments include translating the Israeli novelist A.B. Yehoshua into Chinese — was part of a delegation of 10 Chinese scholars of Jewish studies who visited Israel for a weeklong study tour in mid-January. The academics brought with them stories of their bursting-at-the-seams lecture halls and classes where Tanach, Hebrew and even Aramaic are studied, despite the fact that the field of Jewish studies essentially didn’t even exist in China 20 years ago.

The trip, the first of its kind, came on the heels of a separate seminar in Shanghai in December, where 35 Chinese policy-makers, government advisers and academics met with Israeli scholars to explore Israeli politics, history and culture. Both reflect the growing Chinese fascination with Judaism and Israel that extends from intellectuals to the general public.

“The interest in Jews and Israelis goes way beyond business, way beyond technology, to a wish to understand what the Jewish nation is all about,” said Ilan Maor, joint vice president of the Israel-Asia Chamber of Commerce and a former Israeli consul general in Shanghai.

Israel and some American Jewish groups have been eager to encourage the Chinese interest in things Jewish. For the visit by the Chinese academics, Israel’s Foreign Ministry partnered with the Charles and Lynn Schusterman Family Foundation and the American Jewish Committee’s Project Interchange, which organized the trip. A few days after the academics returned home, it was announced that China Central Television has just produced, in cooperation with Israel’s embassy in Beijing, a 12-part series intended to introduce Chinese audiences to the history of Israel and the Jewish people.

The Israel Project, a Washington-based advocacy group, has proposed building on this interest to create a strong base of support for Israel in China. Last year it conducted a focus group on opinions toward Israel in Shanghai.

“Because China’s interests in the Middle East are relatively recent, and Israel is still largely a blank slate to most Chinese, we have a real opportunity to make a significant impact on its decision-making and views concerning us and the wider Middle East,” Laura Kam, the group’s executive director for global affairs, wrote recently in The Jerusalem Post.

While growing closeness between China and Israel on the diplomatic and trade fronts can be explained in terms of the mutual interests of both countries, the Chinese public’s interest in Judaism is more puzzling.

According to Song Lihong, deputy director of the Glazer Institute of Jewish Studies at Nanjing University, a glance at the shelves of Jewish-interest books in Chinese bookstores provides a clue as to why Judaism fascinates. Popular titles include “The Talmudic Wisdom in Conducting Business,” “Talmud: The Greatest Jewish Bible for Making Money” and “Unveiling the Secrets of Jewish Success in World Economy: What’s Behind Jewish Excellence?”

While Song acknowledges that the nature of this interest may seem “ominous” to Westerners, he insists that there is nothing sinister about it. Divorced from the Christian context that bred conspiracy theories about Jews in finance and the Muslim context that perpetuated them, it is simply driven by a natural curiosity about a group that appears to play a significant role in world affairs.

In Song’s telling, the curiosity reflects “Judeophilia” rather than “Judeophobia.” As the Chinese nation has embarked on a process of economic and technological advancement, it looks upon Jews, another ancient people that seems to have excelled in this area while maintaining a distinctive identity, as a “model it can employ to modernize itself,” he explained.

Song said that Judaism is perceived by Chinese people as being part of the foundation of Western civilization. As a result, they see Judaism as synonymous with “Western,” and many take the view that to learn about the West, one should become familiar with Judaism.

Indeed, Song observed that Judaism is not just seen as Western, it is seen as the best of the West. In China, he said, many erroneously believe that John Rockefeller and Wolfgang Amadeus Mozart were Jewish. “Everything that is successful, smart and rich is regarded as Jewish,” he said.

While the most popular Jewish subjects in China are those related to Jews in finance and contemporary Jewry, some Chinese want to go back to basics and learn about scripture. The study of the Bible has never been particularly popular in China, where the dominant faiths have been Confucianism, Taoism and Buddhism, and where religion was repressed by the communist authorities. In today’s era of openness, however, it is the focus of much curiosity.

Since Christianity and Judaism are both regarded as foreign faiths, there is no reason that studying the Bible through the Christian tradition would necessarily seem more natural than through the Jewish tradition. And even among Chinese Christians there is an interest in studying Judaism. Many Jewish studies students are Christians who “think that they could do with understanding Judaism to understand Christianity,” Song said.

Other students, however, choose Jewish studies for more practical reasons. Zhu Lilan, a 21-year-old undergraduate Jewish studies student at Shanghai International Studies University, is currently brushing up her Hebrew on an exchange program at Tel Aviv University — one of some 150 Chinese students currently studying at Israeli universities. Figuring that the China-Israel trade relations are “getting better and better,” Zhu chose her course of study in part with material rewards in mind. “It think that it’s both interesting and good for future job prospects,” she said.

A New York Jew in China – What Do Chinese People Think of Jews? from Forverts on Vimeo.