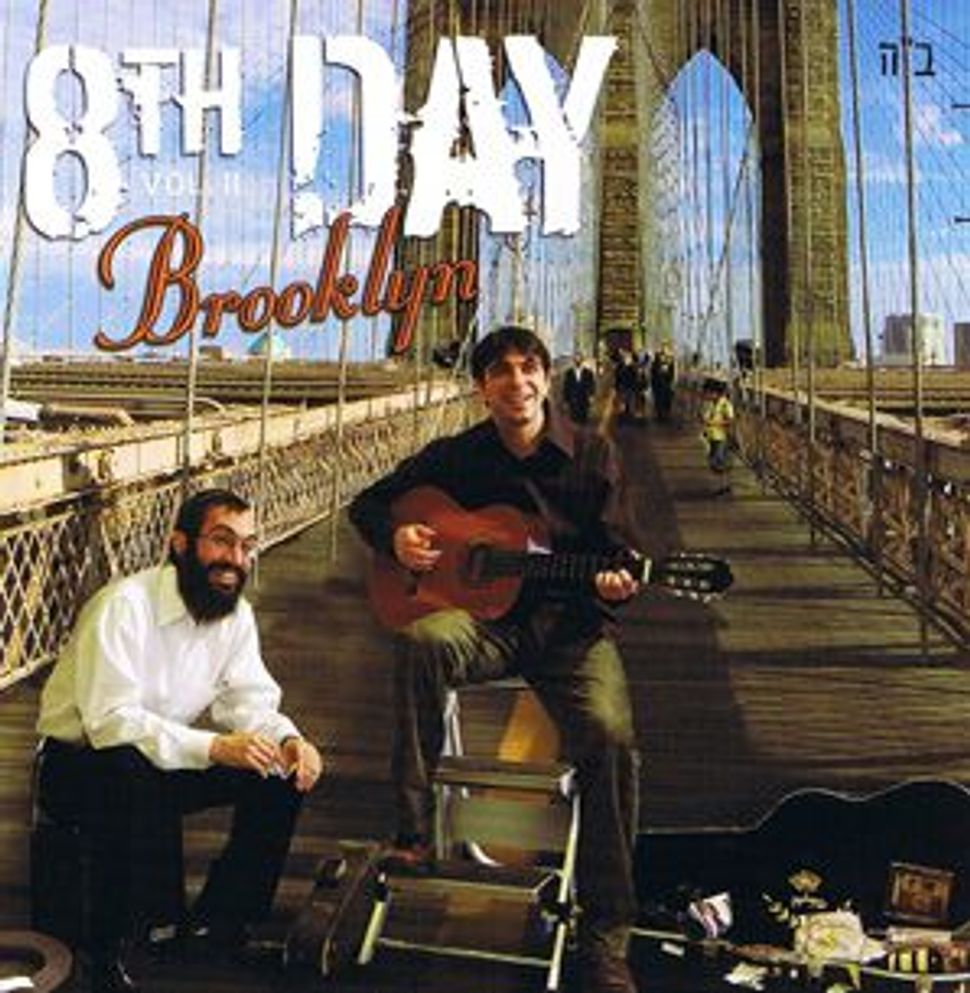 The look I received from the proprietor of Heichal Judaica, A bookstore in Brooklyn’s heavily Orthodox Midwood district, was understandably puzzled, bordering on suspicious. After all, my yarmulke may have said yes-yes, but my jeans and sneakers said no-no. As it turns out, I was in the market for some frum Jewish entertainment and wanted to find out what Orthodox teenagers, some of whom might not be allowed to listen to secular music, were watching and bopping their heads to these days. The musical selections available at the store leaned toward hazanut, or cantorial music, with sensitive bearded men gazing out soulfully from the covers of pastel-print albums. 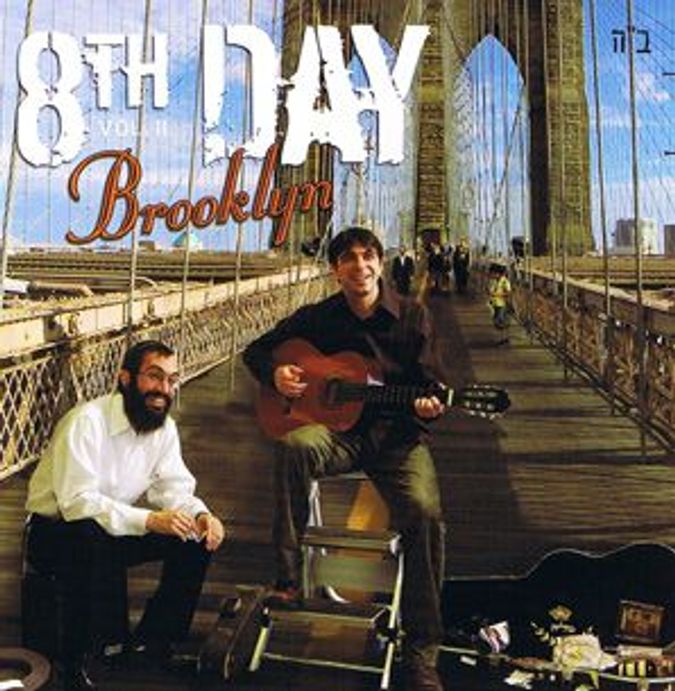 Some performers seemed more in touch with their secular counterparts than others — Ta-Shma (named after a traditional talmudic phrase) is a Hasidic hip-hop band in the mode of Matisyahu, and the guys of the Chevra dress in snazzy white shirts and ties, like the lost Lakewood chapter of the Backstreet Boys fan club. Meanwhile, performers like Lipa Schmeltzer (recording the Hallel prayer) and Michoel Pruzansky were emanations from the cantor-friendly past. After soliciting the assistance of a helpful clerk who himself had only recently departed his teen years, I made my selections and brought them home.

There were subtle differences between these albums and those you might buy at the Virgin Megastore, and some can be seen even before unwrapping. Each album made a point of warning me against playing it on the Sabbath or holidays, and featured a prominent B”H or B”S”D in the top right corner — both acronyms acknowledging God’s bountiful assistance. The music itself, however, was more familiar sounding than might be expected. The Chevra’s third album, cleverly dubbed “Chevra 3,” provides a textbook definition of excess: four singers who sound like *NSYNC wailing over ringing electric solos from a guitarist (Avi Singolda) who dearly misses the glory days of Poison and Mötley Crüe. The result is glorious cheese, where the words (mostly borrowed from the Psalms) take a back seat to the desire to sonically overwhelm. Chevra’s fans may not listen to the radio, but someone involved with the group clearly does.

Arranger Yerachmiel Begun’s album “Miami Moshiach” is performed by a boys’ choir (as opposed to a boy band) with a distinctly Latin lilt. The synthesizers on “Miami Moshiach” are all set to “Cuba,” and even the singers, who carefully draw within the rigid lines of the Miami Boys Choir’s sound, are ever so slightly funkier than usual on songs like “Moshiach.” Begun can’t resist a good metal solo, so “Miami Moshiach” is studded with guitar bits that might be more appropriate anchoring songs named “Cherry Pie” than ones called “Yerushalayim.”

Posed busking on the Brooklyn Bridge with a tallit bag in a guitar case, 8th Day caters to a slightly hipper brand of frum-music enthusiast. Almost every acoustic rock song on “Brooklyn Vol. II” is peppered with Yiddish or Hebrew choruses, with original English lyrics wrapped around snippets of traditional Jewish melodies. In straining for cool, 8th Day torpedoes the second half of “Brooklyn Vol. II” with an instrumental creatively titled “Instrumental,” and with the repetitive “Friends on a Hill,” but “C.D.S.G.” (standing for “Chassidim Don’t Say Goodbye”) and “Krenitz (Babinyu)” rock out, their traditional subjects balanced by a familiarity with contemporary pop trends.

Last but not least, the DVD “A Time for Music XX” gathers performances by Avraham Fried and other luminaries of frum music, including the delightful Shalsheles Jr., whose members, dressed in matching black suits, show off a few wicked dance moves. These pre-bar mitzvah boys’ airy falsettos fill in some of the gap created by the total absence of women from the Orthodox music scene.

A follow-up trip to the store netted some nonmusical delicacies, as well. Perusing the selection of frum-friendly books, I passed on “Time Bomb,” a knockoff of “The Da Vinci Code” — complete with burning dynamite fuse on the cover — and opted for “Amen Allowed,” by M.C. Millman. The novel is a charming trifle about Aryeh, a middle-school English teacher who struggles through a difficult first year at a new school. Parents snipe, the principal whines and Aryeh’s pesky mother absolutely insists that he find himself a wife. But in the meantime, this new teacher must cope with hungry 12-year-olds who continually snack in class. His unorthodox solution to the problem nets him some unexpected dividends. Aryeh decides to let his students eat freely as long as they first say the appropriate bracha, and so he wins over a recalcitrant bunch of underaged malcontents in the process. “Amen Allowed” is perfect Sabbath-afternoon reading — humorous, light and none too challenging.

School appears to be a popular, family-friendly destination in “The Challenge,” an Israeli movie about a nonreligious 17-year-old who takes a bet on whether he can survive a week at a yeshiva without giving himself away. The film is badly dubbed from the Hebrew, and its notion of secular culture appears to consist primarily of pingpong and motorcycles. But there are some clever moments, too, like when the protagonist is trained in the intricacies of shuckling and yeshiva bokher thumb gesturing. “The Challenge” reverses the established order of most nonreligious movies, showing secular life to be empty and bland and the yeshiva world as exciting, challenging and all-consuming.

Meanwhile, the kid’s film “The Adventures of Agent Emes: Rabbi-Napped” (clocking in at a kid-sized 34 minutes) is good, old-fashioned propaganda cleverly disguised as entertainment, with the adventures of the pint-sized secret agent regularly interrupted for valuable messages about the importance of learning Torah and brushing your teeth regularly. Agent Emes battles the evil forces of Aveirah Inc., led by the nefarious Dr. Lo-Tov — a Maurice Chevalier impersonator in a black beret. But the agent commits an indiscretion of his own: He reads The Jewish Press, not this newspaper. For shame, Agent Emes!

Saul Austerlitz is a writer in New York. His work has appeared in the Boston Globe, Slate, the San Francisco Chronicle, the Village Voice, and other publications.