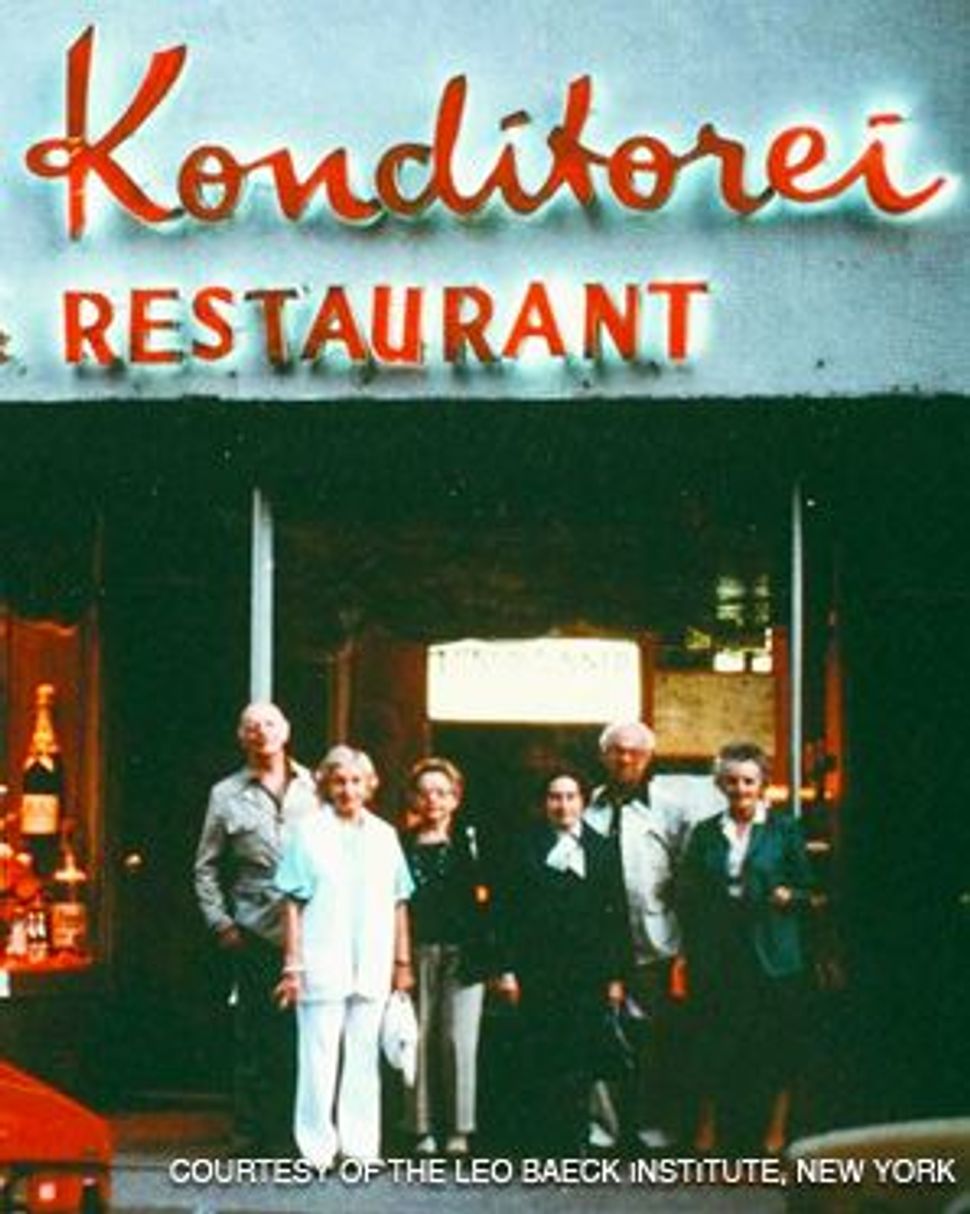 CHAT AND CHEW: Regular participants in Stammtisch, a weekly meeting of German-speaking Jews in New York, circa 1982.

You could call it New York City’s longest-running soiree. For more than 60 years, a German-speaking salon has gathered each Wednesday, attracting artists, intellectuals and literary types — Jews and non-Jews, mostly to the left of center, who’ve sought to maintain their ties to Germanic culture despite disaffection for the political extremism of the 1930s. 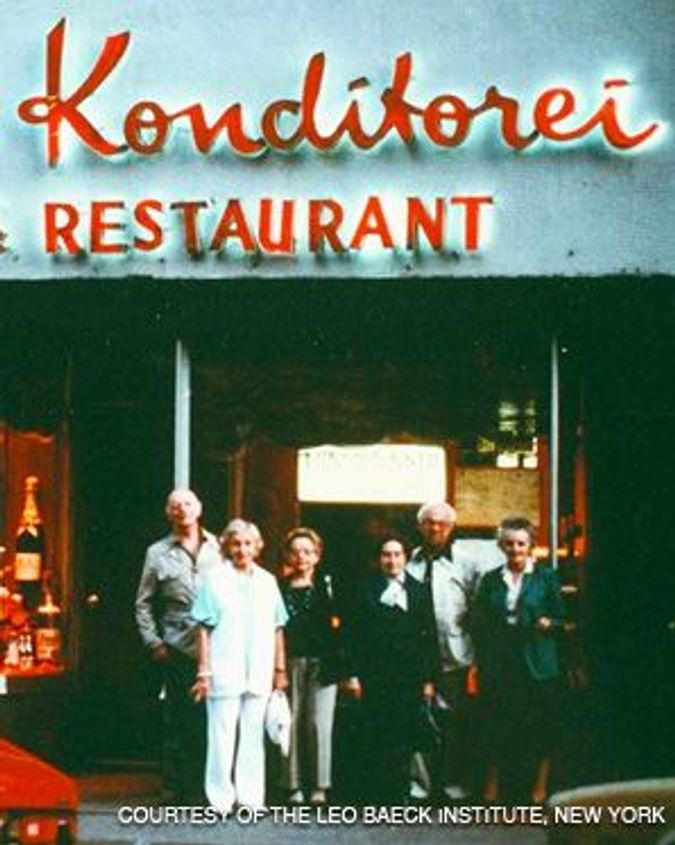 CHAT AND CHEW: Regular participants in Stammtisch, a weekly meeting of German-speaking Jews in New York, circa 1982.

In 1943, two refugees from Nazi regimes — dissident writer Oscar Maria Graf from Germany and his Viennese Jewish friend George Harry Asher — bumped into each other and dined at a German restaurant in Manhattan. They decided to meet weekly, in the style of a Stammtisch, the German and Austrian custom of gathering a group regularly at a certain table in a restaurant, coffeehouse or bar.

“These were people who refused to let Hitler take their language away,” said Janet Gerson, a member of the group.

Graf, a Bavarian Catholic, had famously complained to the Nazis during the book burnings that the authorities should burn his works, too. After he was put on a list of intellectuals to be rescued, Graf arranged the same for Asher.

Initially meeting at several Manhattan restaurants — the Blaue Donau, the Kleine Konditorei, the Heidelberg and the Forester — the group later gathered at Asher’s home before moving to its current quarters, the Yorkville apartment of German Jewish émigré Gabrielle Glueckselig, a former jewelry designer. Her small apartment, filled with European knickknacks and paintings, as well as artwork by her brother-in-law, graphic artist Leo Glueckselig, has been almost elastic in fitting all the guests. A gregarious storyteller, Leo informally screened members for the group. Gaby’s late husband, poet Fritz Glueckselig (who wrote using the pen name Friedrich Bergammer), figured among the group’s original circle of famous writers, along with Hans Sahl and Ernst Schöenwiese. In the early years, Bertold Brecht sometimes engaged in lively debates with Graf.

These days, weekly attendance, ranging from nine to 20 or 30, frequently includes German poet Margot Scharpenberg. Everyone brings a supper dish to share, or homemade German pastries or wine (champagne on birthdays). When Glueckselig rings her bell, the newcomers introduce themselves and all gather to discuss a topic, such as the latest exhibit at the Goethe-Institut, Austrian politics or a recent opera at the Met. Sometimes there’s a reading.

Another time, the German city of Wiesbaden invited Glueckselig to return to her hometown to be honored with a medal. The town appreciated her work of tracing her Jewish family history of gold- and silversmiths in Wiesbaden back to the 17th century. “Wiesbaden tried to make up for what the Nazis did,” Glueckselig said. Since she couldn’t travel, the town came to her, filling the residence of New York’s German consul with the Stammtisch in attendance. This spring, Glueckselig again celebrated with the Stammtisch, marking her 94th birthday.

Asher and Graf are long dead, and only Glueckselig can claim to be from the Stammtisch’s early years. In the 1980s and ’90s, as members aged, the ranks were replenished by younger visitors: a student writing about Viennese artists, an East German journalist, a Swiss scholar writing her environmental psychology thesis on what happens to a Jewish community that’s displaced.

One visitor, University of Salzburg history professor Albert Lichtblau, who has interviewed Holocaust survivors worldwide though he’s not Jewish, ended up publishing a book of Leo Glueckselig’s memoirs. In 1993, he brought 30 Salzburg students.

In the mid-’90s, the Stammtisch debated its very essence: Could the young arrivals really join the group? The decision: The Stammtisch could only benefit from the new energy.

“We’ve been like children. We’ve adopted each other,” Gerson said. Frequently helping Asher in his later years was Michael Spudic, who was raised Catholic and is a klezmer musician who sometimes plays accordion at the Wednesday gatherings.

Over the past dozen or so years, a new hip generation of Austrians and Germans has discovered the Stammtisch while in New York to perform their alternative military service. Since 1991, the Gedenkdienst project, or the Austrian Holocaust Memorial Service, has sent off Austrians to help preserve the history of the Holocaust; some of them work at New York’s Leo Baeck Institute, which documents German Jewish history. Germany’s program, Action Reconciliation Service for Peace, resulted in Marian Meinen joining the Stammtisch last September while working at Washington Heights’ Isabella Geriatric Center, where some Holocaust survivors reside.

The Stammtisch elders, many childless, befriend the young Germans and Austrians, forming relationships that outlast their New York stay. So the Stammtisch has become a rare island of intergenerational friendship in the United States.

“I would never have a chance to meet a 20-year-old from Austria or Germany,” said member Trudy Jeremias, 82, a jewelry designer. “Here there’s no age gap. We’re all friends.” Jeremias escaped to the United States from Vienna after Kristallnacht when her grandfather, a banker, was able to obtain affidavits for visas.

“It’s an amazing institution,” Jeremias said. “It’s full of surprises. One never knows one week to the next who’s going to be there. Something unusual always seems to happen.”

“Wednesday night to me is taboo for anything else,” said Marion House, 85, who fled Berlin via the Kindertransport and now advocates for survivors seeking reparations.

Miriam Merzbacher, 81, considers herself a newcomer, since she’s been going to the group regularly for just over a year. A Theresienstadt survivor and retired teacher, she attended religious instruction at an Amsterdam synagogue with Anne Frank.

Deported to Poland from Berlin during World War II, Hilde Olsen served as an executive secretary to an industrialist. She typed a list of Jews, then added her name, and that’s how she ended up being on Schindler’s list and was able to join the Stammtisch.

For Kurt Sonnenfeld, 82, a Jewish refugee from Vienna who fled on foot through Switzerland and France and then became a social worker in New York, the magic of the Stammtisch is in the mix — of those residing in the United States and those just visiting; of Austrians and Germans; of different generations and religions, and of the varied vantage points for witnessing the Holocaust. The gathering “represents a certain regularity,” he said. “You look forward to going… where you enjoy the groupness of it really.”

“The food is not the major focus, but it helps,” he added. “You’re not only having intellectual nourishment.”

Marjorie Backman is a writer and editor who lives in New York City.