Mixing Reggae and Torah, But Don’t Call Them Jews 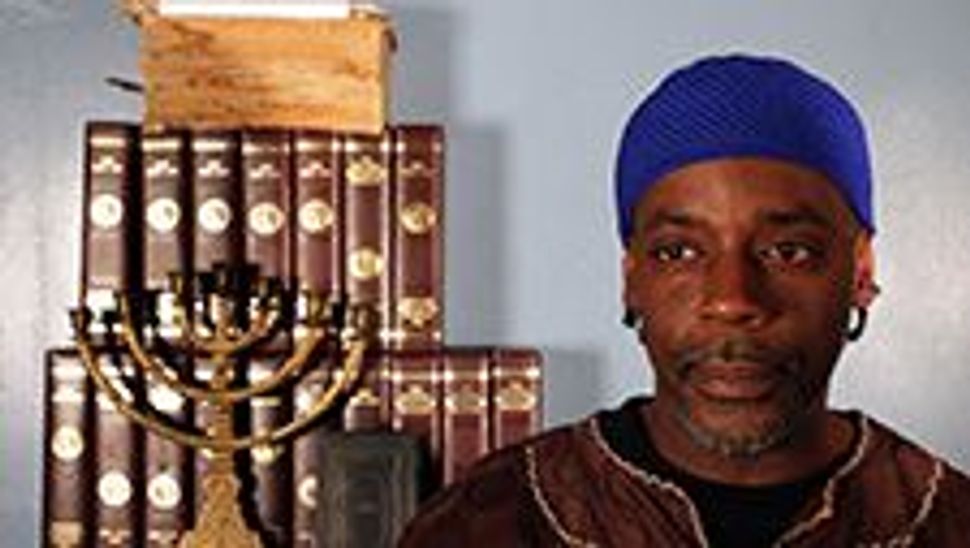 Moreh, Not Rabbi: The temple?s leader, Kahtriel Ben Yisrael, calls himself ?moreh? ? Hebrew for teacher ? not rabbi, to avoid conflation with Judaism. Image by YARDENA SCHWARTZ 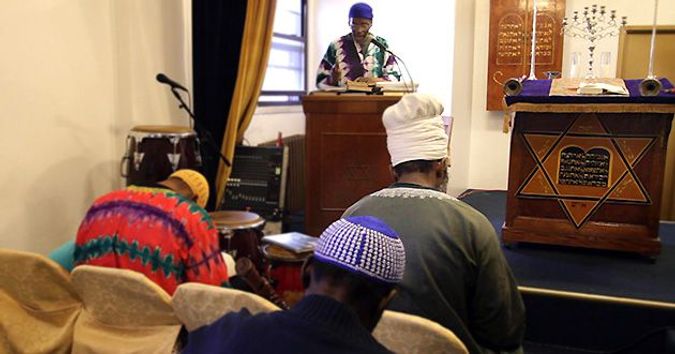 A powerful African drumbeat pounded through the small room, as a singer with a Bob Marley-like voice clicked two small wooden sticks to the rhythm of his words. “When I walk, I walk with love,” he crooned in a mesmerizing Jamaican accent. Every one of the 25 African-American men, women and children in the room sang and danced along with him.

If you closed your eyes, it might seem like an intimate reggae concert. Resisting the urge to dance would be a losing battle. But open your eyes, and an entirely different scene emerges.

The congregation’s members sing of a return to Zion, to their Promised Land of Israel, and praise Yahweh, the ancient name they use for God. All around them are adornments typical of a Jewish synagogue: the Ark of the Torah, a giant map of Israel, Stars of David, a menorah and depictions of the Ten Commandments. But there are also paintings of a black baby Moses and of an African Abraham, and a poster of a young, still black Michael Jackson, which reads: “R.I.P. Michael: We will always love you.” 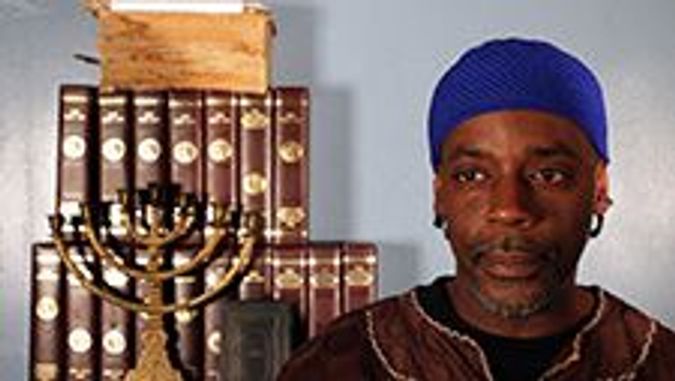 Moreh, Not Rabbi: The temple?s leader, Kahtriel Ben Yisrael, calls himself ?moreh? ? Hebrew for teacher ? not rabbi, to avoid conflation with Judaism. Image by YARDENA SCHWARTZ

Everyone in the room has dreadlocks, but every boy and man has a head covering, bigger and more colorful than the usual. The women wrap their long dreadlocks, some adorned with colorful beads, in scarves reminiscent of those worn by the Orthodox Jews in Brooklyn. The teenage boy playing the drums is named Moshe, and the name of the Jamaican man leading the spiritual song is Naphtali. Almost everyone in the room has a biblical or Hebrew name.

But this is neither a reggae club nor a synagogue. It is the sanctuary of an Israelite temple named Kol Sh’aireit B’nai Yisrael, which for the past 40 years has stood on the corner of Boston Road and Longfellow Avenue in a dingy, camel-colored brick building in the Bronx. Yet few people in the neighborhood know it is there.

“Most people don’t even know what Israelites are,” said Yahkenah Chavis, 35, who has been coming to Kol Sh’aireit since she was 6. “And if they do, they think we’re a cult, or the people yelling on the corner of 125th Street or Times Square.” Chavis and her fellow congregants say that those street-corner proselytizers belong to more radical strands of Israelite culture. Yet there is an extreme and controversial undertone running throughout Kol Sh’aireit, residing within its walls, where Saturday sermons denounce homosexuality, criticize an imperialistic American government, and blame natural disasters on sinners who temple members believe will be killed on Judgment Day, which they predict will soon arrive.

The kosher kitchen and the greetings of “Shabbat Shalom” might lead people to think that the members of Kol Sh’aireit are Jewish, but the Israelites vehemently reject that perception. In fact, assuming they are Jewish might elicit an angry response from some temple members.

The leader of the temple, Moreh Kahtriel Ben Yisrael, understands the misconception, as Jewish and Israelite customs are similar. “If you said I was a black Jew, I’d say you’re close to the mark, but you haven’t hit the mark,” said Kahtriel, whose legal name is Steven Vanterpool. His adopted last name, Ben Yisrael, means “son of Israel” in Hebrew. (Many of the temple members have adopted the same last name.) He avoids the term “rabbi” because it is associated with Judaism, opting instead for the title of “Moreh,” Hebrew for “teacher.” Like most temple members, Kahtriel refers to his legal name as his slave name, and he plans to have it officially changed soon. “As long as we continue to have our slave master’s name, and learn his culture and his ways and know nothing about ourselves,” he said, “then we’re still slaves.”

Israelites regard themselves not as members of a religion, but as a nationality, tied to a land, language, culture and heritage. The lives of the temple members are defined by an unwavering belief that they and all black people, not the Jews, are the true children of Israel, descendants of the Ten Lost Tribes. For the people of Kol Sh’aireit, every day is a fight to reclaim and maintain that history and identity, which they feel was taken from them throughout centuries of slavery and oppression.

Definitive estimates on the number of Israelites in the United States are hard to come by, as the boundaries between Israelites and black Jews are often blurred. Most put the number between 50,000 and 150,000, according to the late Gary Tobin, who founded the San Francisco-based Institute for Jewish & Community Research. And Jeffrey Gurock, a history professor at Yeshiva University, says that the number of Israelites living in New York is just a few thousand. But Kahtriel and his congregants, who refer to each other as brothers and sisters, insist that there are really millions of Israelites, every descendant of every slave. Kahtriel refers to them as “Israelites in the Diaspora.”

This is a highly contentious notion, as Jews believe that they are the modern children of Israel. Gurock characterizes the black Israelite claim as a myth like many others surrounding the Lost Tribes. “Any historian would have to be shown documentation, which simply doesn’t exist,” he said. “It’s an attempt to create a historical narrative for themselves, but I don’t think any reputable historian would give it any credence. I certainly don’t.” Some scholars look at the Israelites’ claims through a less critical lens. According to Zvi Ben-Dor Benite, an Israeli professor of history at New York University and author of the 2009 book “The Ten Lost Tribes: A World History,” the Bible doesn’t speak in racial terms, so it is impossible to know the color of the ancient Israelites. “The question is not whether the argument is true or not,” he said. “It’s how beautiful it is, and it’s pretty beautiful.”

Despite the tension, neither Kahtriel nor his temple members treat Jews with hostility or resentment. They welcomed this Jewish reporter into their house of worship. To them, Jews are followers of a religion based on Israelite customs. They may not be true Israelites, but they are like family, and without them, Israelites couldn’t have retraced their path back to their own roots.

“They’ve maintained those customs, preserving our prayers, our holy days and our traditions,” Kahtriel said, “so we’re able to look back and see the reflections of ourselves by the Jews maintaining our culture for us.”

Though Israelites have conflicting narratives, their customs are not so different from those of Orthodox Jews. The doorways of Kol Sh’aireit are marked with a traditional mezuza, and every temple member keeps kosher, refraining from consuming pork or shellfish. Temple members perform ceremonial circumcisions for newborn sons and celebrate all the High Holy Days, and most can speak and read at least some biblical Hebrew. The women dress with modesty, wearing long sleeves and ankle-length skirts or dresses, and covering their hair with scarves. Male and female temple members wear tzitzit, short fringes of cloth tied to the bottom corners of their shirts.

Yet Sabbath services at Kol Sh’aireit diverge significantly from that of a synagogue. Similar to Muslim tradition, the temple members remove their shoes before entering the sanctuary, and while praying, they often kneel down with their heads on the ground. The service begins as temple members line up behind Kahtriel at the sanctuary doorway and shout “Hallelujah!” in unison at least five times before entering in single file, singing, “We’re marching onto Zion, beautiful, beautiful Zion.” While the prayers are similar, complete with the frequent “Baruch atah,” or “Blessed are you,” recited by Jews, the Israelites profusely praise “Yahweh,” a sacred word for God that is not spoken aloud by Jews. A typical Sabbath meal includes both collard greens and salmon salad, served alongside Manischewitz and Welch’s Grape Juice. When services at Kol Sh’aireit end, congregants often hold Hebrew lessons while listening to Israelite rap music with lyrics about the patriarchs Abraham, Isaac and Jacob.

And there are sometimes strident, even disturbing, messages. During a recent sermon, Kahtriel spoke in a booming, emotional voice about how the Israelites were punished for not obeying Yahweh after they left Egypt and were scattered to all corners of the earth, made to live in chains and sold as slaves, their identity stolen from them by their masters. He insisted that Hurricane Katrina and the earthquake in Haiti were acts of punishment from God, and that Israel is at war because the land is occupied by two religions that have no rightful claim to it.

Kahtriel acknowledges that his service could seem radical or controversial to an outsider, but he sees no need to defend these beliefs to critics. His eye is on the common struggle of the Israelites and on his own uphill battle to enlighten people about their Israelite heritage. “It’s not a popular movement,” he said, “because people have seen so many Black Nationalist movements that they’re skeptical of everything.”

When he’s not leading services at Kol Sh’aireiet, Kahtriel is working in construction. His current project is at Manhattan’s Mount Sinai Hospital, an irony not lost on the devout Israelite. According to the Torah, Mount Sinai was the mountain in ancient Israel where God delivered the Ten Commandments through Moses. When Kahtriel first arrived on the job, he met some Israelites from other temples. “One was Gershon, the name of one of Moses’ sons,” he said. “That Shabbat, I told the congregation that at Mount Sinai I met Moses’ son. They had a laugh.”

View a related video below:

The lost tribes of Israel…in the Bronx from Yardena Schwartz on Vimeo.

Mixing Reggae and Torah, But Don’t Call Them Jews