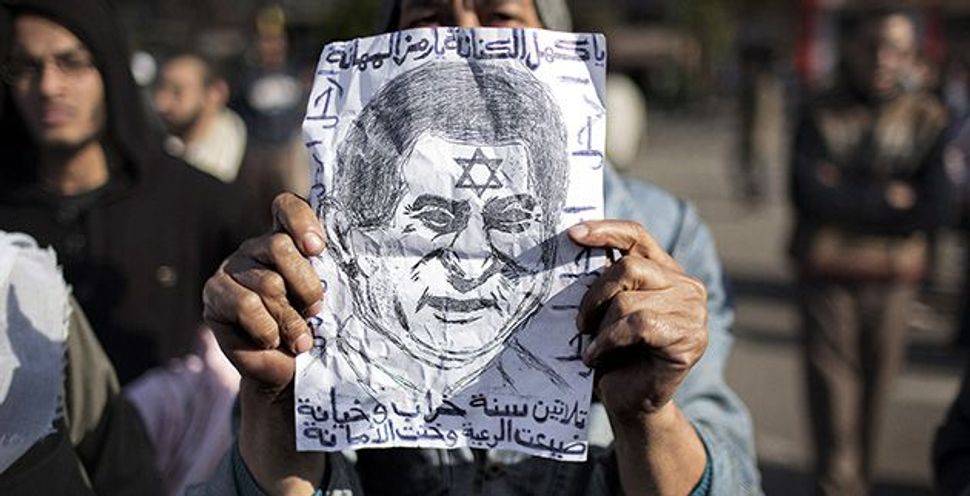 Egypt and Israel: An Egyptian protester holds up a caricature of President Hosni Mubarak with a Star of David on his forehead. Image by GETTY IMAGES

After once uniting to support regime change in Iraq through an American military invasion, neoconservatives are now divided as they face the prospect of a regime change in Egypt driven by popular internal forces out of America’s control.

As Washington’s foremost champions of pushing to overturn Middle East dictatorships, monarchies and autocracies, these advocates, including former officials of the Bush administration, hail the revolutionary calls for democracy echoing out of Cairo as a belated vindication of their ideology. But the specter of anti-Western and anti-Israeli Islamist groups surging in to fill the political vacuum is giving some of them pause.

“The U.S. should make clear in an unambiguous way that a Muslim Brotherhood takeover of Egypt is a danger to American interests and could even lead to American intervention,” David Wurmser, an adviser on the Middle East to vice president Dick Cheney, told the Forward. The Brotherhood is a well-organized and long-supressed Islamist opposition group in Egypt and is now part of the broad coalition calling for a democratic revolution there.

Wurmser described the recent events in Egypt as a “bittersweet moment,” for those who share his worldview. “Bitter” because he fears the final outcome of a revolution, and “sweet” because the popular uprising proved that “what motivated the Arab street is not the Israeli-Palestinian conflict, but the awful governance in their own countries.”

But some supporters of the democracy-first approach believe that the rise of extremism in Egypt could be inevitable and must be accepted. “There’s a price one has to pay for embracing a dictatorship,” said Reuel Marc Gerecht, a senior fellow at the Foundation for Defense of Democracies. Gerecht, a former CIA specialist, said that another inevitable consequence of the uprising in Egypt could be a drive to chill relations with Israel. “We will see a significant change, and it will be rough,” he said. “Israel will have to adjust, and we will all need to cross our fingers and hope that the interest of democracies to avoid wars will be resilient.”

Historically, neoconservatives have not simply advocated embrace of any party that emerges victorious in a democratic process in the Middle East. In 2006, when the Islamist group Hamas won American-backed Palestinian parliamentary elections in the West Bank and Gaza, Wurmser wrote a memo to his boss, Cheney, warning that “engagement and tolerance” of Islamist forces, even if democratically elected, would only build up their power.

Subsequently, the Bush administration strongly opposed efforts to bring together Hamas and its secular opponent, Fatah, into a unity government. After Hamas took control of Gaza in a clash with Fatah, Bush supported tough Israeli sanctions against Hamas, which is considered a terrorist organization.

Still, in a Washington Post opinion piece published January 29 by Elliott Abrams, a deputy national security adviser in the second Bush administration, the tone of vindication was inescapable.

“Egypt protests show George W. Bush was right about freedom in the Arab world,” the headline on the piece read.

“It definitely shows that those who stressed the dangers of a policy that emphasizes stability at the expense of democracy had valid concerns,” said Douglas Feith, former undersecretary of defense for policy, of the events in Egypt.

The outcome of American wars in Iraq and Afghanistan dealt a blow in public opinion to those who advocated an American policy of pressing any world leader, friend or foe, to adopt democracy. But backers of the neoconservative view believe that events on the ground are now demonstrating the importance of this policy, of what they refer to as the “freedom agenda” — an American policy that puts front and center the drive for democracy.

“It shows how desirable it would be if the U.S. had made an effort in advance to cultivate benign political forces in the Arab world,” said Feith, author of “War and Decision: Inside the Pentagon at the Dawn of the War on Terrorism,” in an interview with the Forward.

According to Feith, the problem of succession in Arab regimes was known to be one of the toughest for American policymakers. “Those in the Bush administration who spoke about the importance of promoting democracy had problems of this kind in mind,” he said.

For all their difficulties, Feith believes that the Bush-era wars in Afghanistan and Iraq have proved to be important in empowering Arab protesters. “In a broader perspective, it will be seen that people’s expectations [for democracy] were affected by the sight of people choosing their own leaders in other countries,” he said.

Peter Beinart, an initial liberal supporter of the Iraq war who later turned against it, saw an element of truth in one aspect of the neoconservative worldview, though heavily laced with irony.

“Middle Eastern tyrannies aren’t falling the way George W. Bush predicted,” Beinart wrote on the website The Daily Beast. “America isn’t the hammer; if anything, we’re the anvil. But Bush’s argument that Middle Eastern democracy could help drain the ideological swamp in which al Qaeda grew may yet be proved true. Osama bin Laden has never looked more irrelevant than he does this week.”

But some in the Jewish community voice concern even if a more moderate scenario unfolds, one in which the emerging secular opposition leader, Mohamed ElBaradei, takes over after the fall of Mubarak. “He is a stooge of Iran,” warned Malcolm Hoenlein, executive vice chairman of the Conference of Presidents of Major American Jewish Organizations. In an interview with the Orthodox website The Yeshiva World, Hoenlein argued that when ElBaradei served as head of the International Atomic Energy Agency, he “fronted” for the Iranians and distorted reports pointing to a covert Iranian nuclear program.

“All we can do is express our hope that Egypt will be more democratic and that the tripartite relations between Egypt, the United States and Israel remain strong,” said Abraham Foxman, national director of the Anti-Defamation League.