From Bean to Bar 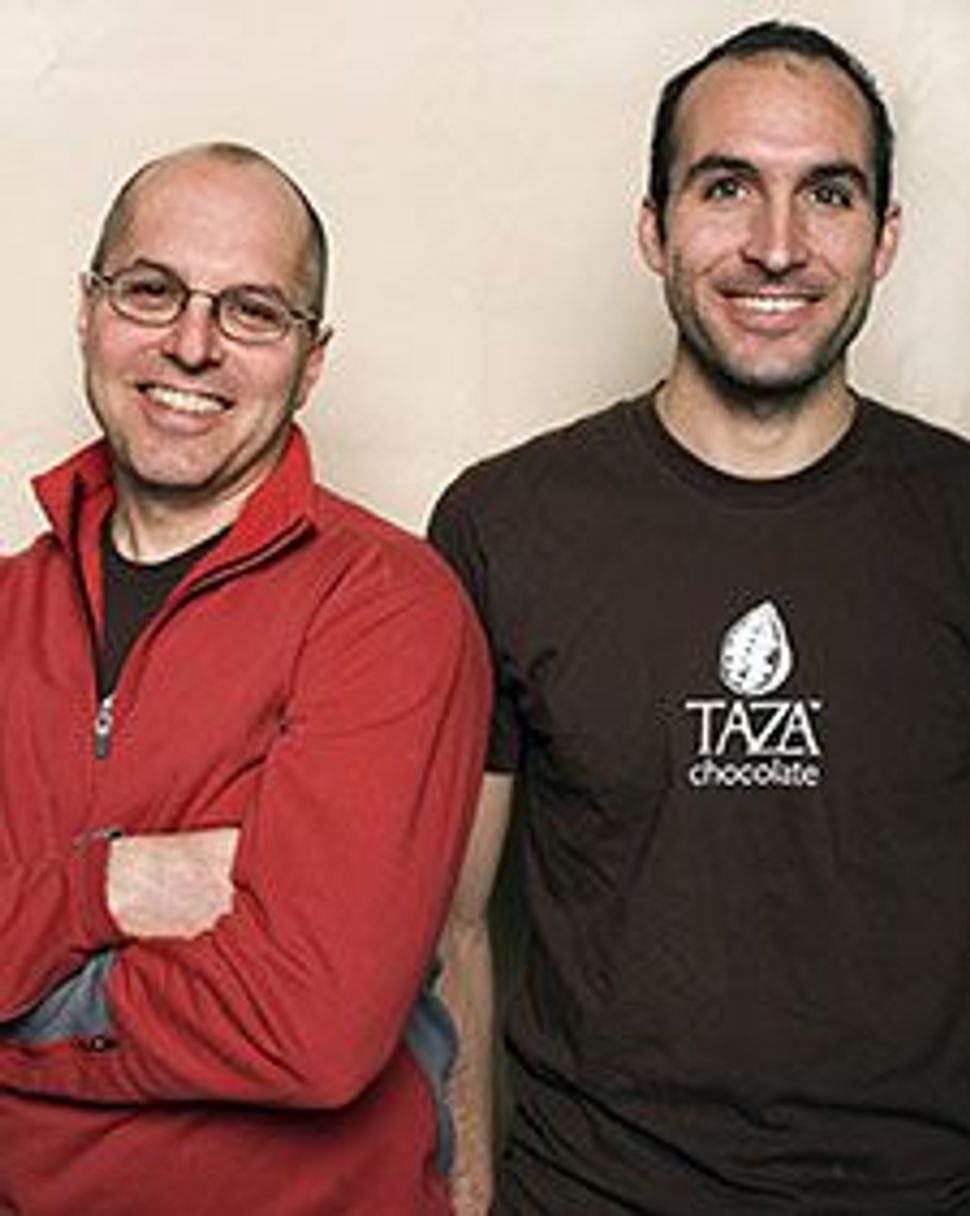 Mexicocoa: Taza?s kosher chocolates are among a new generation of small-batch, artisanal and fairtrade chocolates that have launched in the past decade. Image by Courtesy of Taza Chocolate

When it comes to chocolate, I have enjoyed something of a fairytale childhood. Chicago, where I grew up, has long been a center of candy manufacturing — at one time simultaneously home to the buttercream chocolates of Fannie May, Dove’s chocolate-dipped ice cream bar, and Frango’s ethereal mint-chocolate meltaways. Some afternoons, when the wind blew just right, the heady scent of cocoa would wash over my family’s suburban backyard — a gift from an M&M Mars factory, located just 10 blocks to our north.

Chocolate, then, was something I loved and avidly consumed, but admittedly also took for granted. Until recently, it had been years since a new chocolate discovery felt particularly exciting. But the discs of Mexican-style chocolate made by Taza Chocolate in Somerville, Mass., which arrived at the office of the magazine where I was working this winter, caught my attention. 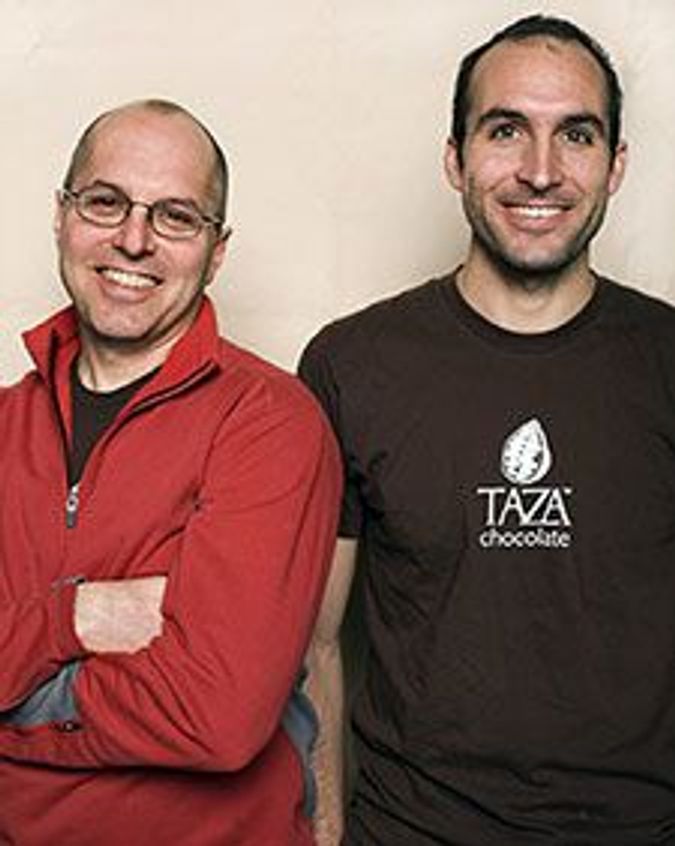 Here, I thought, was something truly unusual. Taza’s chocolate was sweet, with a deep, multilayered cocoa flavor — everything a quality piece of chocolate should be. But its distinctive snap and rustic, grainy texture, the result of processing the roasted cocoa beans on traditional Oaxacan stone mills called molinos, were completely unlike the hyper-creamy European-style chocolates that dominate chocolate sales in the United States. Whether nibbled straight or melted and whisked into steamed milk to make hot chocolate, this was a sweet with serious personality. The wax paper wrapper also boasted an OU pareve symbol, making Taza one of the only available sources for kosher-certified Mexican chocolate.

Founded in 2006 by former Zipcar colleagues-turned chocolate-enthusiasts Alex Whitmore, 34, and Larry Slotnick, 52, Taza is among a new generation of small-batch, artisanal and fair-trade chocolate brands that have launched in the past decade. The company places a high value on the integrity of its ingredients. The cocoa beans, for example, are grown by a cooperative of farms on the northern coast of the Dominican Republic. Likewise, their sugar comes from a sustainable cane producer in Brazil, and their vanilla pods are grown organically in Costa Rica.

Unlike many of their competitors, such as Chocolove and Dagoba, however, Taza is a bean-to-bar company, which means they start with raw cocoa beans that they then roast, winnow, grind, temper and hand-wrap on-site in the factory. In addition to its chocolate discs, which come flavored with vanilla, coffee, chili, almond, or salt and black pepper, Taza makes 60%–80% dark chocolate bars, semisweet baking chocolate squares and chocolate-covered cashews and almonds. “We approach chocolate as a food rather than an indulgence,” Slotnick told the Forward — sage words to live by. And like all sustainable food producers, Taza uses its products as a platform to educate consumers about the farms, people and history behind each bar.

The idea for Taza came to Whitmore in 2005, when the native Bostonian became enamored with chocolate production while on a trip to Mexico (likely the birthplace of processing cacao into something edible). While abroad, Whitmore learned about the Latin American ritual of drinking chocolate called xocolatl, meaning “bitter water,” that would eventually make its way to Europe via Columbus and other cross-Atlantic explorers, sparking centuries of chocolate production there. (Jews, as a side note, were involved in both the trade of cacao and the production of chocolate in Spain, France and Italy throughout the 17th and 18th centuries.) Compelled by the methods he learned and the chocolates he tasted on his travels, Whitmore returned to the States with the desire to share sustainably produced Mexican-style chocolate with American consumers.

His ethics-fueled vision appealed to Slotnick, a New York-to-Boston transplant who was raised in a Reform Jewish household and had developed a strong, internalized notion of tikkun olam, repairing the world. Slotnick had spent many years of his professional life working to build healthy local communities — first as an early Zipcar employee, and later through founding the urban transportation not-for-profit the LivableStreets Alliance. So the opportunity to support farming communities abroad through chocolate production (while simultaneously strengthening Somerville’s economy with a new factory) seemed like a natural next step.

Taza has grown steadily over the past five years, but hit its stride in 2010, undergoing a factory expansion and opening to the public for tours. Together, Whitmore, Slotnick and the rest of the Taza team are creating chocolate (up to 2,500 pounds each week) that is at once traditional and surprising, complex and yet elemental — chocolate that the company may regard as “food, not indulgence,” but, as the recipe below proves, tastes pretty great as dessert, too.

Taza Chocolate can be purchased directly through the company’s website (tazachocolate.com) and in the specialty department of many Whole Foods stores across the country.

The recipe for this decadent, spice-kissed pudding is included in my forthcoming book, “The Hadassah Everyday Cookbook” (coming in March from Rizzoli). Serve it topped with whipped cream and berries or chocolate shavings.

1. Add eggs, vanilla, cocoa powder, cornstarch, cinnamon and sugar to blender, and process until smooth. Scrape down sides with a rubber spatula; add chocolate, and blend until combined; set aside.

2. In a small saucepan, heat milk and cream over medium-low heat (not higher), stirring occasionally, until simmering. Immediately pour milk mixture into blender; cover and blend on high until smooth (hold down the lid firmly when blending), stopping to scrape down the sides when necessary.

3. Pour into 4–6 small cups or ramekins (this pudding is very rich, so a little goes a long way). Cover with plastic wrap, and chill for 3 hours, until set.

From Bean to Bar