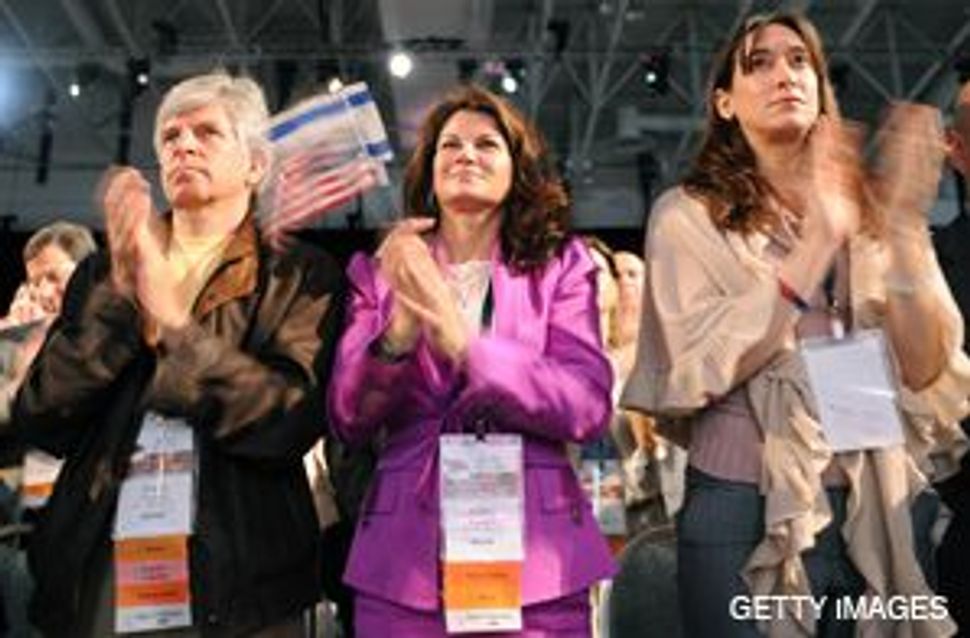 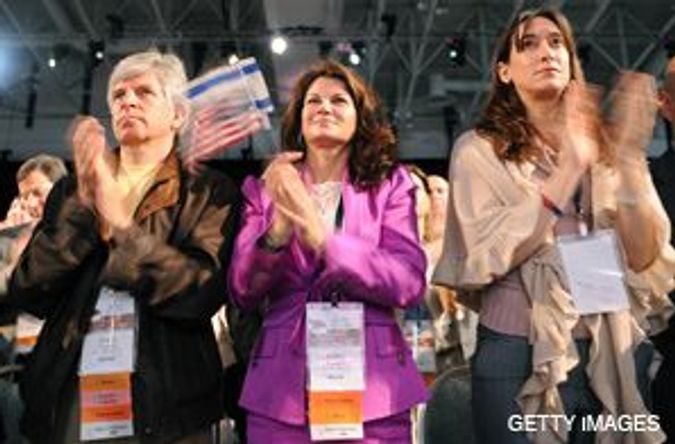 Prime Minister Ehud Olmert, under fire at home for a deepening corruption scandal, left behind his political trouble in Israel for a two-day visit to hear Senators Barack Obama, John McCain and Hillary Clinton speak to the American Israel Public Affairs Committee. Saying he was “deeply impressed” by all the candidates’ speeches, Olmert cautiously dodged questions about his views on the race, in particular when it came to Iran.

“When a presidential election campaign is going on, it is best for Israelis not to express any views on issues in dispute,” Olmert said.

The Israeli prime minister did, however, praise Obama’s pledge in his speech to keep Jerusalem as Israel’s undivided capital.

“His remarks on Jerusalem were very touching,” Olmert said in a briefing after meeting President Bush on June 4 at the White House.

The primary process in the United States, he said, was fascinating. He also said that he intended to speak by phone to each of the three senators returning to Israel.

“I watched the end of the race on TV, and I listened to the speeches of Obama, McCain and Clinton,” Olmert said, smiling. “I was mostly impressed by the respect with which they treated each other.”

The prime minister is under investigation for receiving cash donations from a New York businessman and has said he would resign if indicted. Meanwhile, Olmert’s coalition partners are calling for his resignation. So, too, are several members of his own Kadima party, who are also demanding new elections for the party leadership.

Olmert had courteous words for the presidential candidates, but kept most of his praise for Bush, whom Olmert described in his speech to Aipac as a “remarkable friend.”

Asked if this would be his last visit to Washington as prime minister, Olmert said only that he had no plans for another trip this year to the United States.

The annual debate over the Aipac Action Agenda — the pro-Israel powerhouse’s lobbying platform — took a turn to the right this year, with the leader of the Zionist Organization of America introducing 14 amendments that were approved as official policy of the American Israel Public Affairs Committee.

Most of the changes pushed for by the ZOA’s president, Morton Klein, were minor, but each gave a right-wing tint to the platform. The action agenda is produced by Aipac’s executive committee, which includes representatives from major Jewish groups, as well as Aipac board members.

In one move, the executive committee approved an amendment sponsored by Klein demanding that Fatah, the political party of Palestinian Authority President Mahmoud Abbas, change 10 clauses in its charter calling for Israel’s destruction. Attempts last fall to raise this issue at the Conference of Presidents of Major American Jewish Organizations failed. Palestinians maintain that the charter does not have any official standing, and Israel’s government has not taken up the issue.

Aipac’s executive committee adopted the amendment, though it is not yet clear whether the organization will actively lobby in favor of congressional action on the charter issue.

The other major change that Klein successfully pushed deals with the American embassy in Israel, which pro-Israel activists have long wanted moved to Jerusalem, the Jewish state’s capital, from its current location in Tel Aviv. Congress passed legislation in 1995 requiring the move, but administrations since then have utilized a clause allowing them to delay relocating the embassy if necessary for reasons of national security.

In the June 2 meeting, Klein proposed adding quotation marks to the term “national security” and opposing the government’s use of this waiver to prevent the relocation of the embassy.

Aipac’s leadership opposed the amendment, arguing that it would put the pro-Israel lobby on record as contradicting the government’s reasoning on issues of national security. Nevertheless, the change passed with the support of an overwhelming majority of the committee.

A member of the executive committee, who spoke on condition of anonymity, said that while the changes made to the action agenda are mainly symbolic, they can cause Aipac embarrassment and run counter to the group’s stated support for the peace process.

Klein did propose a number of changes that were rejected, including a call to drop the word “peace” when referring to negotiations with the Palestinians.

Controversial evangelical leader Pastor John Hagee did not attend this week’s annual policy conference of the American Israel Public Affairs Committee, but the continuing support he enjoys within the pro-Israel community was nevertheless on display.

Just two weeks ago, presumptive Republican presidential nominee John McCain rejected Hagee’s endorsement due to the pastor’s past controversial comments about the Holocaust and the Catholic Church. But in a closed-door, off-the-record session at the Aipac conference devoted to the topic of evangelical support for Israel, there was plenty of enthusiasm for the embattled pastor among those who crowded into a Washington Convention Center meeting room.

“I want to take a moment to discuss with you a good man, evangelical pastor John Hagee,” Brog said to the audience. Before Brog could finish the sentence, the crowd broke into a lengthy round of applause, ending in a standing ovation. Among the few attendees who did not cheer at the mention of Hagee’s name was the Anti-Defamation League’s national director, Abraham Foxman, who has occasionally been critical of the ties between the Jewish community and Christian Zionists.

Leaders of the Union for Reform Judaism spearheaded the criticism of Hagee last month, after it emerged that in past sermons the pastor had portrayed the Holocaust as an attempt by God to force Jews to move to Israel.

Last year, Hagee was one of the keynote speakers at the Aipac policy conference and was warmly welcomed by attendees. According to Brog, Hagee was invited to join this year’s conference as a participant but could not attend due to his busy schedule.