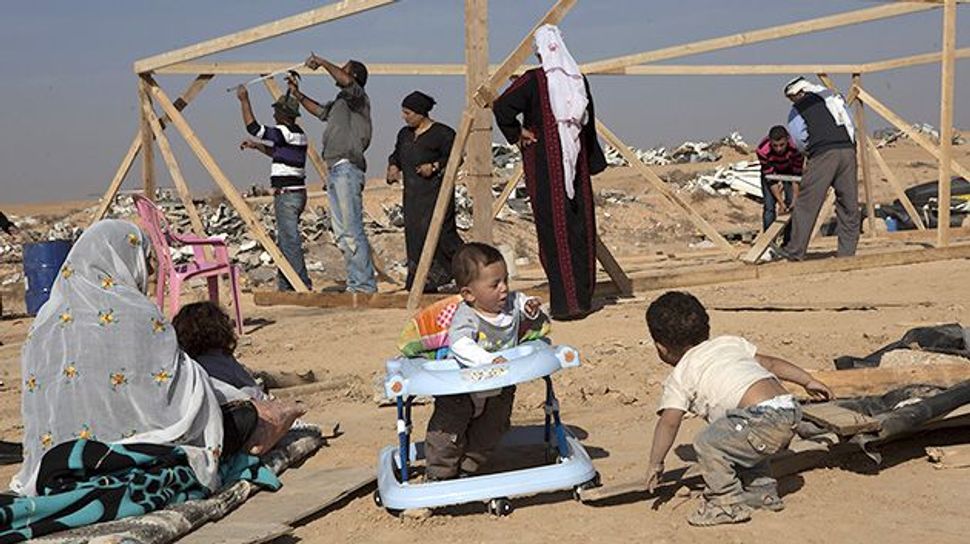 Rebuilding: Members of the Al-Turi family from the village of Al-Arakib rebuild a makeshift home in December after it was demolished for the eighth time by the Israeli government. Image by Getty Images

In American Jewish memory, the Jewish National Fund’s historic blue pushkes, or charity boxes, evoke warm images of hard-earned pennies given to the group’s mission of redeeming the Land of Israel through planting trees. But to the Bedouin of Al-Arakib, a village in the Negev, the group’s current forestation plans mean the destruction of their homes and what they say is the theft of land they have owned since the beginning of the 20th century.

The village, until last summer a modest gathering of 45 homes in the desert, five miles north of Beersheba, was first demolished by the tractors and bulldozers of the Israel Land Administration, a government agency, last July, to lay the groundwork for the JNF forestation project. But the villagers have returned repeatedly to rebuild ramshackle structures symbolizing their claim to own the land, only to see the tractors and bulldozers return to destroy them again in what is now a cycle attracting international attention.

The latest demolition, on February 8, marked the 14th time that the government sent its equipment to destroy the rebuilt structures.

JNF in Israel has declined to comment on the project. But Haia Noach, a Jewish Beersheba resident who chairs the Negev Coexistence Forum for Civil Equality, strongly criticized the group. “The planned forest is a means, a technique, to Judaize the area,” he said.

Noach and about 80 others demonstrated outside JNF’s Jerusalem headquarters February 1 to protest what they consider the organization’s darker side. Land in the Negev desert should be used for “housing and education” and not for “racist forestation,” chanted the crowd, which comprised Jews and Arabs.

A week earlier, a coalition of seven American Jewish and 10 Israeli not-for-profit organizations issued a statement condemning the charity. The not-for-profits’ statement — signed in the United States by the Jewish Alliance for Change, Rabbis for Human Rights-North America, Jewish Voice for Peace, the Workmen’s Circle/Arbeter Ring, the Tikkun Community’s Network of Spiritual Progressives and the Shalom Center — called on supporters of JNF worldwide to pressure the charity to suspend the project.

JNF “must no longer serve as an accomplice to the discriminatory policy” of evicting Bedouins, the organizations declared in an online petition that had garnered more than 3,000 signatures at press time. Another petition, targeting Israel’s political leaders, had received almost 4,500 signatures.

But there is some dissent on the issue in JNF’s American affiliate. Seth Morrison, a board member of JNF in the Washington metropolitan area, wrote in a Jerusalem Post op-ed that Israel should cancel all policies that lead to the eviction of Bedouins. Morrison urged JNF to refuse to plant on land that Bedouins claim.

“In addition to the moral dilemmas these policies create, they cannot possibly serve Israel’s own best interests,” Morrison wrote.

It’s not the first time the charity has found itself enmeshed in controversy over land acquisition practices that critics say besmirch its historic reputation as a redeemer of the land. JNF, whose charter specifies it may lease lands under its control only to Jews, was involved in the confiscation of properties from Arabs in the Palestinian East Jerusalem neighborhood of Silwan in the late 1990s. Many of the Arab residents contested JNF’s claims that they lacked proper title to the homes in which they were living, or that the properties had been legally abandoned. But they lost in court, and JNF proceeded to lease out the tracts – with no public bidding – to the City of David Foundation, a not-for-profit better known by its Hebrew name Elad.

Arik Ascherman, executive director of Rabbis for Human Rights and a vocal supporter of Al-Arakib, told the Forward that while he has “admiration” for some of the JNF’s role in state building and some of its current work, it is time for it to change its position on the so-called redeeming of land. “The JNF has to just say ‘no — we have moral and ecological red lines,’” he said. Ascherman wants the charity to refrain from working on lands where Arabs claim historical rights.

For its part, the ILA, which is implementing the demolitions, insists that the land the Bedouin villagers claim was never privately owned. “This is state land (‘mawat’) according to Ottoman law, which was adopted by the British Mandate and absorbed into the laws of the State of Israel,” it said in a statement in response to questions from the Forward.

The ILA also stated that the land where Al-Arakib stood fell within a 25,000 acre expanse of the Negev that was declared state land in 1954 “as part of extensive expropriations that were implemented for development, settlement and security purposes.” Any parts of this land that were privately owned became state property, and any parts that were already state property under British or Ottoman rule had their status confirmed under the law of the new Jewish state, the ILA added. In view of this, the ILA argues, any discussions about who owned the land before 1954 are academic — the only important fact is that its state-ownership was reconfirmed in this year. As far as the ILA is concerned, sympathy toward the villagers stems from “propaganda aimed at delegitimizing Israel’s government and legal system.”

Both the ILA and the villagers agree that all structures in this dispute were erected without the necessary building permits. These are difficult for the Bedouin to obtain because of planning processes that Israel’s Arab sector and the Israeli left claim are discriminatory — a charge the government denies. The lack of permits for the structures made them illegal. But this just made Al-Arakib one of about 35 unrecognized Bedouin villages in the Negev that, as they don’t officially exist, don’t receive municipal services and can’t connect to the electricity grid or water carrier.

It is Israel’s claim to the land itself that underlies the right the state claims to destroy their homes, sparking the fury of the Bedouin — a group which unlike most other Arabs, sends many of its young men into the Israeli army, yet has seen huge tracts of its traditional holdings lost to Israeli expropriation over the course of the state’s history.

Sitting around a fire in a shack on the land in question a few hours before the demonstration against the JNF, some 20 Al-Arakib residents recalled that they had long been concerned as they watched three JNF-planted forests grow around their village. ILA tractors just demolished their structures for the 12th time, leaving only this shack and one other. All that was to be seen elsewhere were a few piles of rubble and flat desert sand.

The village sheik, Sayach Abu-Medirem, told the Forward that while his community does not have deeds for the land in question, it does have documents from the Ottoman era that show that its ancestors purchased the land from other Bedouins. In his view, by not honoring these, Israel undermines the legitimacy of some Jewish locales, whose patrons purchased land in similar deals in the early 20th century. “Kibbutzim — from whom did they buy their land? From Bedouins!” he asked. “So why do they have the protection of the law but we don’t?”

The Bedouins say that their families bought the land in 1906 and maintained a constant presence until 1953, when they left — but only because the military instructed them to. Abu-Medirem said that they were originally told to leave for six months, but were never officially allowed back.

While hardly any villagers lived in Al-Arakib after 1953, several continued to farm there. Then, about 10 years ago, while retaining the homes that they had since established elsewhere, the three clans from the village sent members to live there. They admit that this was a conscious attempt to reassert claim to the land and prevent forestation by the ILA and JNF, which they believed to be imminent. To the ILA, this demonstrates that the villagers are not dispossessed; they are perpetrators of a land grab.

The villagers’ attorney, Michael Sfard, dismisses this assertion as ridiculous. He says that the ILA should hold off on demolitions until several ownership cases he has brought to court are resolved. “Their message is that the court decision is a technicality — that they can treat the ground as if it is already in their authority,” he complained.

The ILA responded that even if the court rules that the villagers’ families owned the land before the 1950s, the appropriation to the state will stand, and they will receive only compensation, not the right to return. Thus, the agency said, there was no reason to hold off evicting them or asking JNF to start its work.