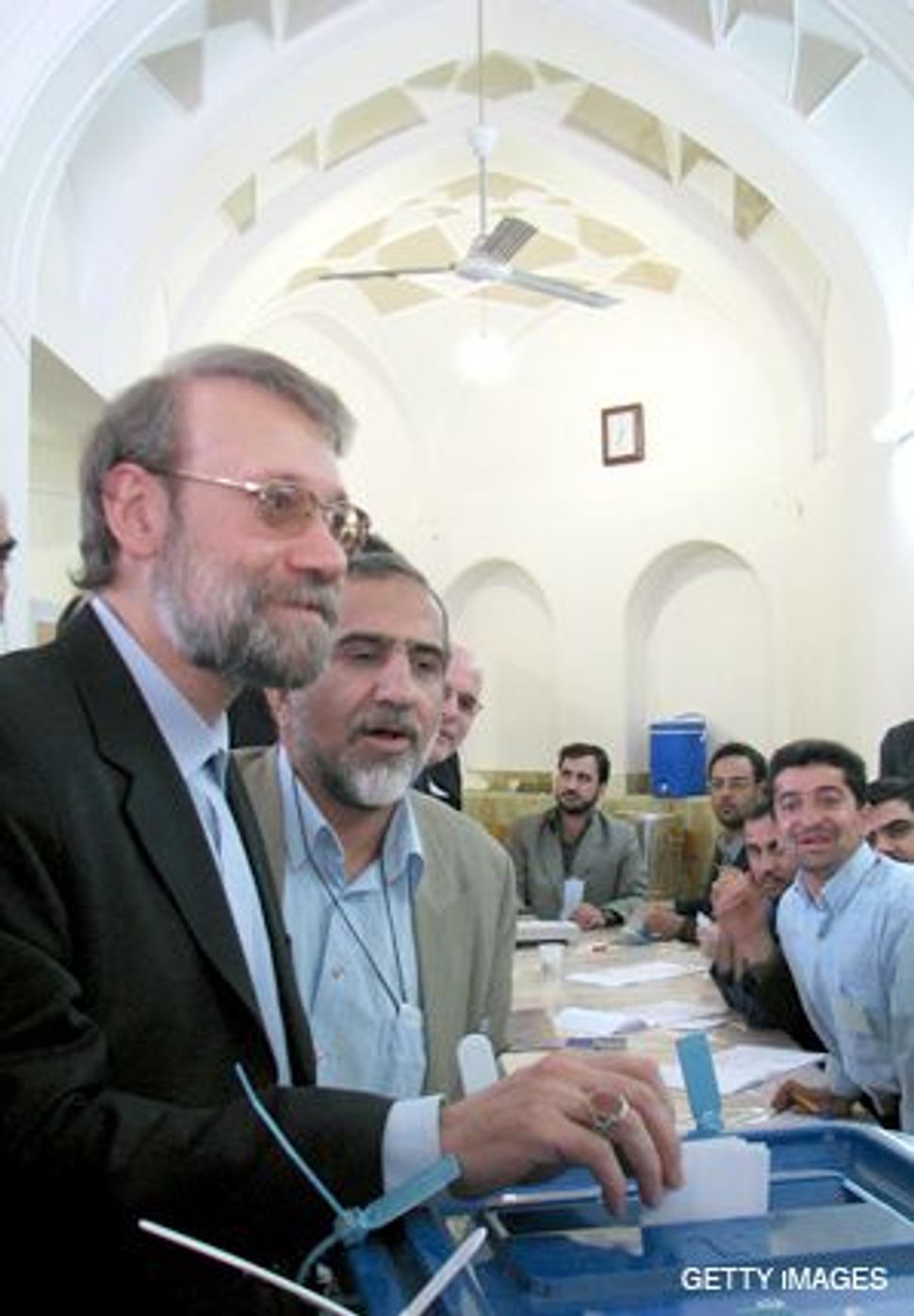 THE CONTENDER: Ali Larijani (left) is expected to challenge Mahmoud Ahmadinejad in next year?s race for the Iranian presidency.

With one year to go before Iran’s next presidential election, Mahmoud Ahmadinejad is facing an open and increasingly pointed challenge from rivals within his own conservative camp. 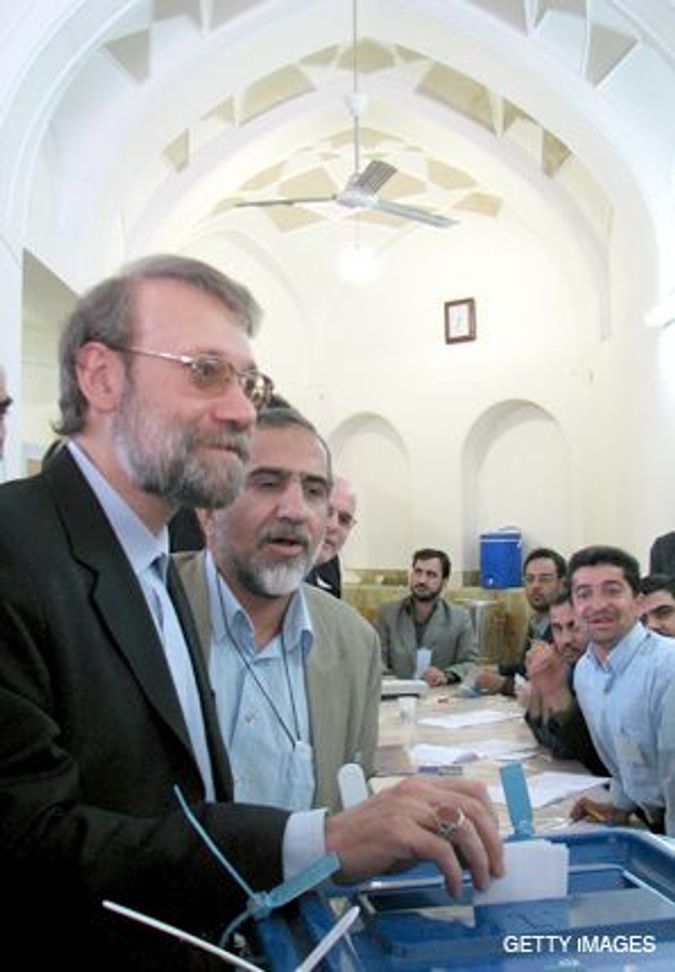 THE CONTENDER: Ali Larijani (left) is expected to challenge Mahmoud Ahmadinejad in next year?s race for the Iranian presidency.

On June 1, Ahmadinejad’s archrival and likely 2009 opponent, Ali Larijani, was elected to the powerful post of speaker of parliament for one year. Within hours of Larijani’s victory, an Iranian media outlet reported allegations that close to $35 billion in oil proceeds — nearly half of Iran’s annual revenue from oil — was missing from government coffers.

“Electioneering has started in earnest,” said Meir Javedanfar, an Israel-based Iran scholar and co-author of a biography of Ahmadinejad. “Larijani wants to expose Ahmadinejad by casting light on corruption and even challenging him on the nuclear issue. In other words, he wants to beat him at his own game.”

While key decisions on Iranian national security and foreign policy remain firmly in the hands of Supreme Leader Ali Khamenei, observers say Larijani’s return to power suggests that Khamenei’s support for Ahmadinejad is on the wane. Much of the rising discontent among Iranians is centered on the economic woes the country has endured under Ahmadinejad, but among the ruling clerical elite there is also growing resentment of the president’s frequent invocation of religious principles to justify his policies.

Larijani, who quit as Iran’s chief nuclear negotiator late last year over differences with Ahmadinejad, was overwhelmingly elected speaker, garnering 237 votes in the 290-member parliament. The lopsided vote suggests that his candidacy had the backing of Khamenei. During the previous presidential elections, in 2005, the supreme leader threw his weight behind Ahmadinejad, then the relatively unknown mayor of Tehran, rather than supporting more experienced candidates, including Larijani.

Larijani has indicated that he envisions a more active role for parliament, which is dominated by moderate conservatives. Last March, elections were held for parliament, and observers expect that the newly elected lawmakers will be more critical of the president than their predecessors were. Their most obvious target is Ahmadinejad’s handling of the economy, which has been plagued by high inflation and unemployment despite the windfall from record oil prices.

Allegations of corruption are also likely to feature in the campaign, as they did in Ahmadinejad’s successful run in 2005. On the day of Larijani’s election last month, the Tehran-based Shahab News reported that the Iranian parliament’s chief auditing office found that almost $35 billion of oil revenues from the fiscal year ending in 2007 could not be accounted for. The report hinted that the money may have been used for political and military operations without parliament being properly informed. The claims could not be verified.

Criticism of the president is also being aired in religious quarters. In recent weeks, several prominent clerics have begun to openly criticize Ahmadinejad’s references to the Mahdi, also known as the “Hidden Imam,” who Shi’ites believe disappeared more than 1,000 years ago and will return to usher in a new era of peace and harmony. After Ahmadinejad claimed recently that the Mahdi was ruling the world and the country’s affairs, he was rebuked by several high-ranking theologians who urged him to concentrate on solving social and economic issues rather than indulging in theological discussions.

“Diplomats may put Iran’s nuclear program front and center, but within the Iranian domestic debate the issue is economy, economy, economy,” said Michael Rubin, a fellow with the conservative American Enterprise Institute and a former consultant to the Pentagon on Iran during President Bush’s first term.

“Larijani has led the conservative camp criticizing Ahmadinejad’s leadership on domestic policies,” Rubin said. “That said, both are hard line and neither is a shrinking violet when it comes to relations with the United States or the general parameters of Iran’s foreign policy. Where they differ is on style, not substance. Larijani will stake out as hard a line on Iran’s nuclear program, Israel-Palestine and Hezbollah. He won’t, however, seek glory in Holocaust denial or talk of the Hidden Imam’s return.”

In his first speech to parliament, Larijani did indeed strike a hard line on key foreign policy issues, among them the Israeli-Palestinian conflict, the situation in Iraq and Iran’s nuclear program. He also warned that Iran may reconsider its cooperation with the United Nations’ nuclear watchdog after the International Atomic Energy Agency issued a report criticizing Iran’s failure to account for recent developments in its nuclear program.

At the same time, he has offered guarded optimism about the prospects of a visit to Tehran by top European diplomat Javier Solana, who served as Larijani’s Western counterpart in negotiations over Iran’s nuclear program. And according to at least one proponent of talks between Tehran and Washington, the new parliament leader has his sights set even farther west.

“The previous speaker was very close to Ahmadinejad and expressed only limited interest in a dialogue with Congress,” said Trita Parsi, president of the National Iranian American Council. “Larijani, however, is quite clear in his interest to negotiate with the U.S. and may utilize his speakership as a platform to reach out to the growing number of U.S. lawmakers who have expressed an interest in a parliamentarian dialogue.”