As Olmert Totters, Kadima Looks to Livni for Clean Break From Past 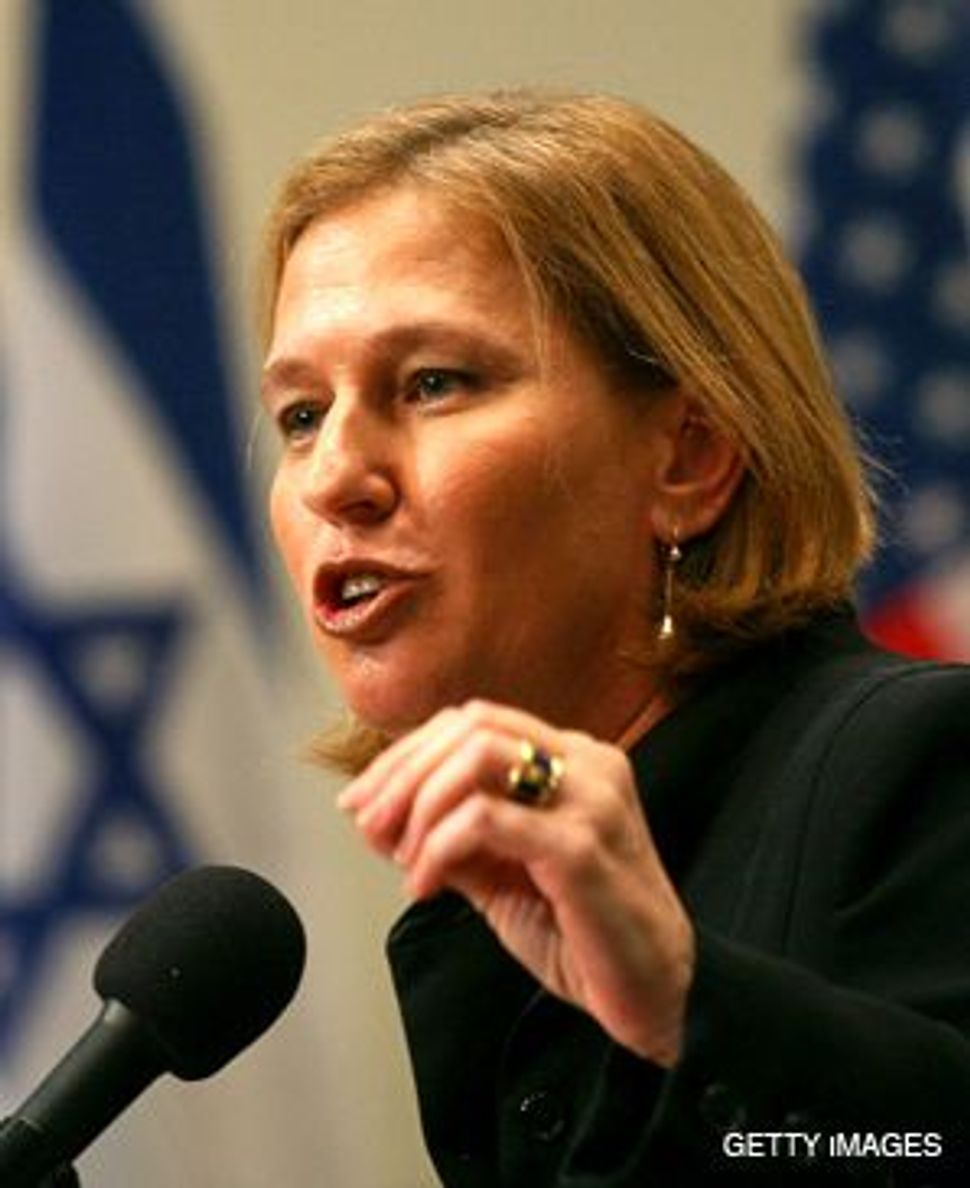 Haifa, Israel – As Ehud Olmert’s premiership appeared to be crumbling this week, all eyes in Israel were turning to his likely successor, squeaky-clean Foreign Minister Tzipi Livni, who is widely viewed as the ruling Kadima party’s much-needed antidote to the corruption-dogged leader. 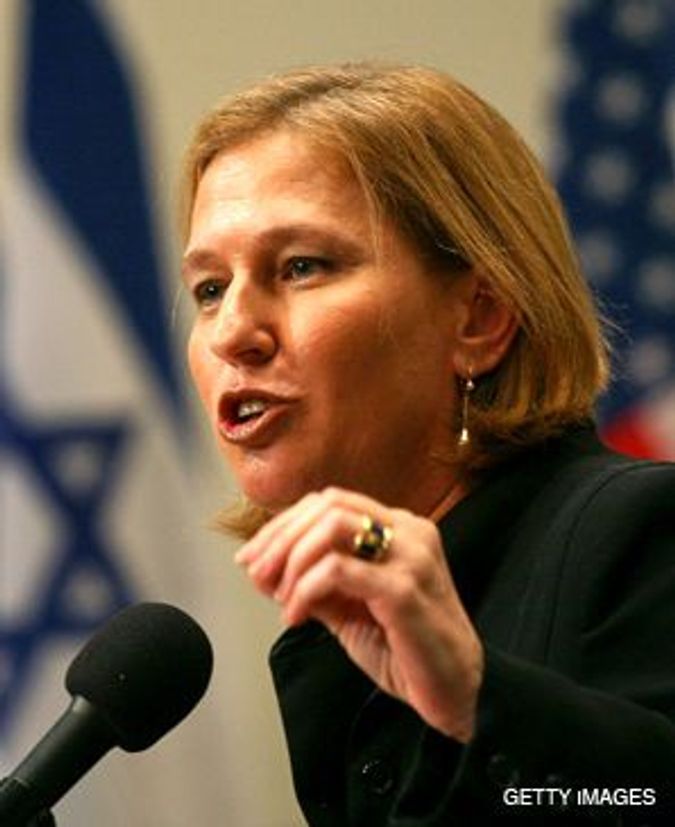 Signs that the end is near for Olmert are surfacing on every front. He has signaled a willingness to let his own Kadima party organize new leadership primaries. A Knesset member from the opposition Likud is pledging to submit a bill dissolving the parliament. The rabbinic elders who rule Shas, the Sephardic Orthodox party, have instructed its lawmakers to support the bill.

A poll by the Dahaf Institute for Yediot Aharonot, released May 29, found that Livni, 49, is the clear front-runner to take over Kadima. Some 39% of party members would vote for her, placing her well ahead of rival contender Shaul Mofaz, currently transportation minister, who polled 25%.

On first glance, Livni would appear to be bad news for Kadima, since the party is eager to attract votes from left and right and she appears to alienate both camps. Suspicion on the left is aroused by her belief in the right of the Jewish people to the entire biblical Land of Israel and by her deep roots on the political right, while her newfound enthusiasm for trading land for peace makes her something of a traitor for many on the right.

The Israeli public, however, is changing as a result of the Olmert corruption scandal and because of a recent spate of other shadows over public figures. Voters are now less likely to decide their party allegiance purely on tribal loyalty to the traditional right or left. Instead, many now look for politicians they feel they can trust, even if their ideology isn’t a close match.

“Though she is not so popular on normal criteria, Livni seems to them to be a sober person in a crazy world, which gives her a certain appeal,” said Israel Democracy Institute senior research fellow Tamar Hermann, whose areas of expertise include voting behavior and the peace camp.

Livni has been a Knesset member since 1999, first for Likud and then, since 2005, as a founding member of Ariel Sharon’s Kadima. A Haaretz poll, released June 1, showed that the public views her as honest and sincere.

She called for her boss, Olmert, to resign a year ago, after his leadership was criticized in the interim Winograd Commission report on the Second Lebanon War. Seven months earlier, she showed her no-nonsense attitude toward misconduct by public figures, becoming one of the first politicians to call for the resignation of Israel’s figurehead president, Moshe Katsav, who had been indicted on a number of charges, including rape. Eight months after her demand, Katsav stepped down.

This time, when Olmert came under public scrutiny, Livni was subtler in her bid to claim the moral high ground. “Every person needs a dream, some backbone and a moral compass to guide him,” she said cryptically at a May 15 conference. “Every state needs a dream, a purpose and a moral compass that unites the nation and guides its leaders.” More recently, speaking at a Yad Vashem ceremony last week, she said that “the state has a vision and values that obligate its citizens and its leaders.”

While Livni “is not the sweetheart of anyone left of center,” Hermann said, in the current climate her clean image has the potential to secure left-wing support. “She is thought of as rational and a person of principle, and given a lack of other politicians with these qualities, this could work to her advantage.”

Ben Mollov, a Bar-Ilan University academic who has edited studies of Israeli voting behavior, agrees. “Someone like Livni, who can provide the better type of government that Israelis are keen to see, or at least the perception of that, could have a wide appeal,” Mollov said. “Livni could well become an acceptable figure for the left.”

What’s more, with poor showings for Labor in polls — the Dahaf Institute survey predicted just 15 seats — Hermann predicts that “if it looks likely to be her or [Benjamin] Netanyahu, she will receive a lot of votes [from the left] to keep him out.”

A precise mirror image movement is taking place on the right, where Livni is seen as something of a traitor.

Her enthusiasm for territorial compromise with the Palestinians, which emerged only after she was elected to the Knesset, “has her father turning in his grave,” said Michael Kleiner, who is chairman of Herut, a right-wing breakaway from the Likud that claims continuity with the party founded by Irgun fighters under Menachem Begin in 1948.

Livni’s father, Eitan Livni, was an Irgun hero and right-wing lawmaker who stayed so loyal to the Irgun’s ideology of the Greater Land of Israel that he tried in 1978 to block his friend Begin from agreeing to the Camp David peace agreement with Egypt. Before his death in 1991, the elder Livni even insisted that his gravestone be emblazoned with an Irgun symbol — the Land of Israel in its biblical borders, with a gun and bayonet cutting through the center and the words “Only Thus!” printed on it.

“Livni’s father liberated lands, and she is ready to give them away,” Kleiner said.

But as much as he hopes this sense of betrayal will turn right-wing voters against the younger Livni, Kleiner believes that many will overlook this because of her clean image. This, he said, is likely to trump the rhetorical consistency of Likud leader Benjamin Netanyahu, who is widely seen as a slippery character. Netanyahu is mistrusted by many on the right for signing two agreements with the Palestine Liberation Organization, including a 1997 troop reduction in Hebron and the 1998 Wye Accords.

Netanyahu offers a more right-wing agenda, but according to Kleiner, people fear he will prove more dovish than he promises. In contrast, Livni is prepared to make concessions, but only those that she touts during electioneering. “These are unusual times when honesty and integrity are seen as more important than they are normally, and maybe she will prove popular with right-wing people who don’t trust Netanyahu,” Kleiner said.

Arye Naor, associate professor at Ben-Gurion University and an expert on the Likud, concurs. “It seems that a good PR adviser will suggest to her to run a campaign based on anti-corruption, which would appeal to some on the right, who would otherwise vote for Likud,” he said.

Kleiner, himself a parliamentary candidate and likely to be one of the most right-wing voices in the Knesset if elected, fears the power of her clean image even after polling day. “Her integrity will make it harder for me to attack her when she tries to take Israel back to pre-1967 borders,” he complained.

As Olmert Totters, Kadima Looks to Livni for Clean Break From Past