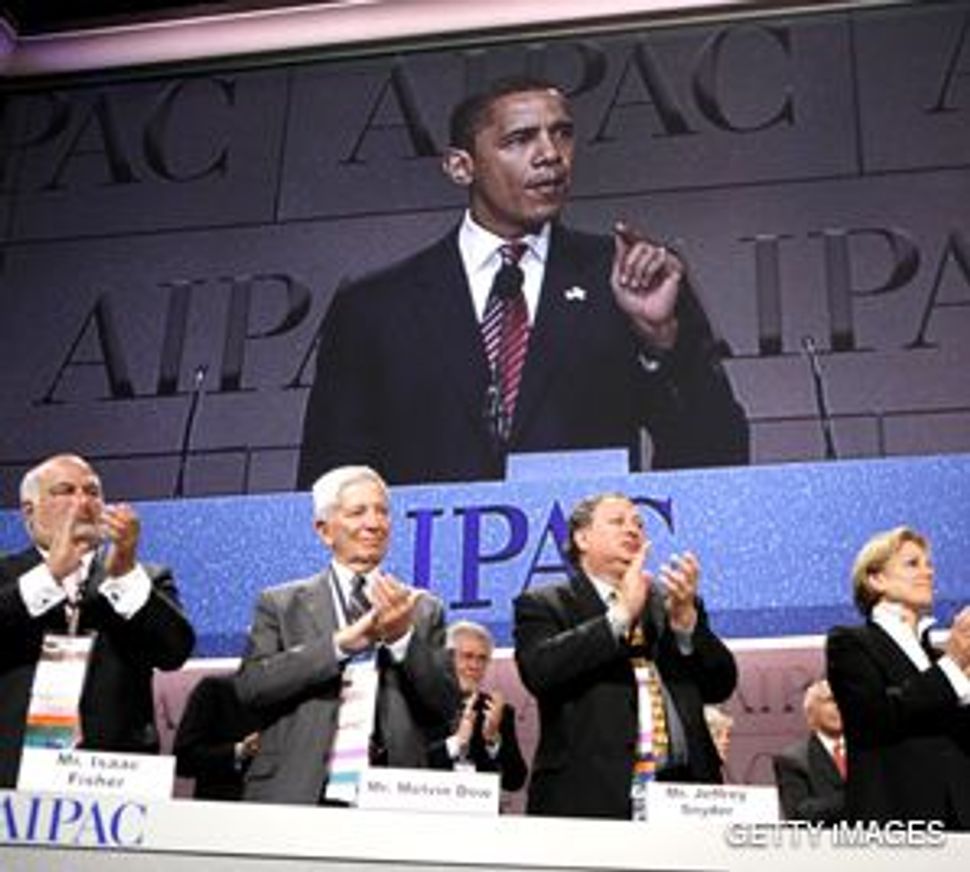 GIVING HIM A HAND: A day after defeating Hillary Clinton in the Democratic primaries, presumptive nominee Barack Obama was welcomed by delegates to the American Israel Public Affairs Committee?s annual policy conference.

Washington – Despite a concerted effort by the pro-Israel lobby in Washington to maintain a spirit of bipartisanship in this election year, this past week’s annual meeting of the American Israel Public Affairs Committee turned into a charged campaign battleground between Republican John McCain and the newly nominated Democrat, Barack Obama. 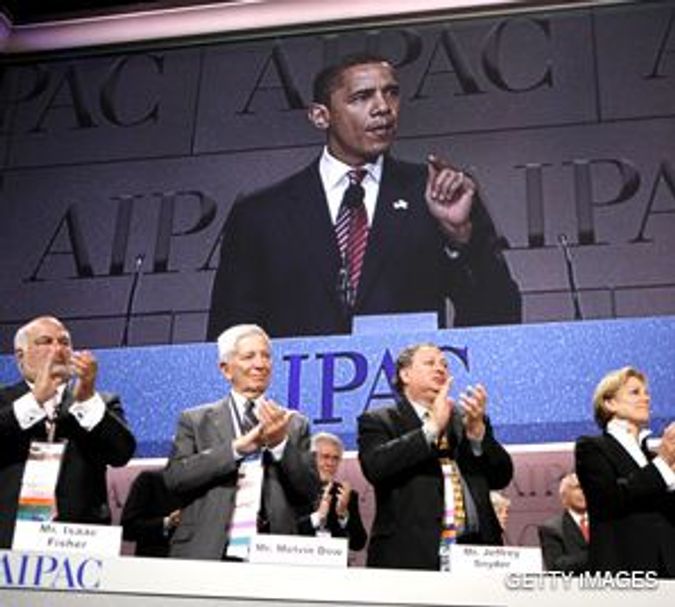 GIVING HIM A HAND: A day after defeating Hillary Clinton in the Democratic primaries, presumptive nominee Barack Obama was welcomed by delegates to the American Israel Public Affairs Committee?s annual policy conference.

In front of some 7,000 Aipac delegates, the presumptive nominees traded barbs over each other’s views on the Middle East, with Iran emerging as a focal point for debate in the run-up to the November presidential elections.

McCain, the first speaker at the conference, set the tone. He pointedly attacked Obama over his views on Iran. In his June 2 speech, McCain criticized Obama’s stated intention to enter negotiations with Tehran, saying it would lead to no more than an “earful of antisemitic rants.”

McCain also attacked Obama on his refusal to vote for a congressional resolution declaring the Iranian Revolutionary Guard Corps a terrorist group. “Here, too, he is mistaken,” McCain said, arguing that the proposed legislation would send the right message to Iran.

The remark drew a standing ovation at the conference. It also drew anger from Jewish Democrats, who argued that McCain inappropriately used his Aipac platform to engage in politicking.

Matt Dorf, a consultant working with the Democratic National Committee, said that McCain’s remarks “broke with protocol.” Dorf added that he could not recall another instance in which such direct political attacks were delivered from the podium at an Aipac conference.

A day after clinching the Democratic nomination, however, Obama struck right back at his Republican rival. In a June 4 speech from the same Aipac podium, the Democratic candidate argued that McCain had misrepresented his views on Iran and that the presumptive Republican nominee’s views on foreign policy mirror those of the Bush administration.

“Senator McCain refuses to understand or acknowledge the failure of the policy that he would continue,” Obama said. “He criticizes my willingness to use strong diplomacy, but offers only an alternate reality — one where the war in Iraq has somehow put Iran on its heels.”

There was scattered applause to this remark, but in general the crowd was very warm and there were many standing ovations, especially when he spoke about Jerusalem.

Obama received some unexpected support from Senator Hillary Clinton, just a day after the final primary contest between the two Democratic candidates and before Clinton had conceded the nomination to Obama. In what was perhaps her first open show of support for Obama, Clinton vouched for the Illinois senator’s views on the Middle East.

“Let me be very clear,” Clinton told the Aipac delegates, “Barack Obama will be a good friend of Israel.”

Organizers of the Aipac conference tried to ensure that delegates received each candidate warmly and that political differences were left at the door. Organizers drove home the message in closed-door meetings with groups of delegates from each state, as well as by Aipac’s executive director, Howard Kohr, in his plenary speech.

“We are not a debate society, or a protest movement,” Kohr said. The group’s goal, he said, is “to have a friend in the White House.”

M.J. Rosenberg, a former Aipac staffer who now works with the dovish Israel Policy, said that Aipac never endorsed political fighting but cannot determine the actions of its individual members. And indeed, reactions varied. McCain was applauded when talking tough on Iran and when arguing against a quick withdrawal from Iraq. Obama succeeded in bringing the Aipac crowd to its feet when talking about his commitment to an undivided Jerusalem and his pledge to stop Iran from obtaining nuclear weapons; however, his call for an Israeli settlement freeze was met with silence.

“They would like Obama to be welcomed like McCain, but I doubt if they can control it,” Rosenberg said.

Aipac insiders argued that the focus on differences at the conference does not reflect the similarities between the two candidates’ views. On the issue of Iran, an Aipac official said, both candidates agree on the need for toughening economic sanctions against Tehran, broadening the measures taken outside the United Nations framework and using diplomatic pressure to persuade Iran to give up its nuclear program.

Both candidates are also on the record as stating that military action against Iran is an option if diplomatic and economic steps do not work. The difference on the issue of holding negotiations with Tehran is also less divisive than has been suggested, according to Aipac officials, since Obama made clear there are preparations that need to be made and coordination that needs to take place before talks with Iran can begin. Finally, the Aipac official pointed out, Obama and McCain also agree on other key issues on the pro-Israel lobby’s agenda — in particular, foreign aid to Israel, support of a two-state solution to the Israeli-Palestinian conflict and the importance of backing Israel’s right to defend itself.

Emphasis on the bipartisan nature of support for Israel was also the essence of talks given by politicians from both sides of the aisle.

In one breakout session during the conference, California Democrat Brad Sherman and Indiana Republican Mike Pence had practically identical answers to almost all questions posed by the Aipac official moderating the discussion.

“I don’t see partisan divide being a problem,” Sherman said, and his political rival was quick to agree, adding a rhetorical question: “Why the bipartisan support? Because Israel is right.”

Partisan politics did, however, flare up in a meeting room next door to where Sherman and Pence were speaking. In a panel discussion titled “The Road to the White House,” four political mavens discussed politics, throwing humorous punches at both Republican and Democrats. But at least one Aipac member in the audience did not find the remarks funny.

“Why aren’t you telling the truth? Why are you against the Republicans?” shouted out Isaac Shepher of Los Angeles, who was identified by an Aipac insider as a $100,000 level donor to the pro-Israel lobby.

Rob Bassin, the lobby’s political director and moderator of the discussion, suggested that Shepher take his criticism elsewhere. The Los Angeles activist left the room, but not before shouting that would take with him his annual donation to Aipac. A spokesman for Aipac declined to comment on the incident.