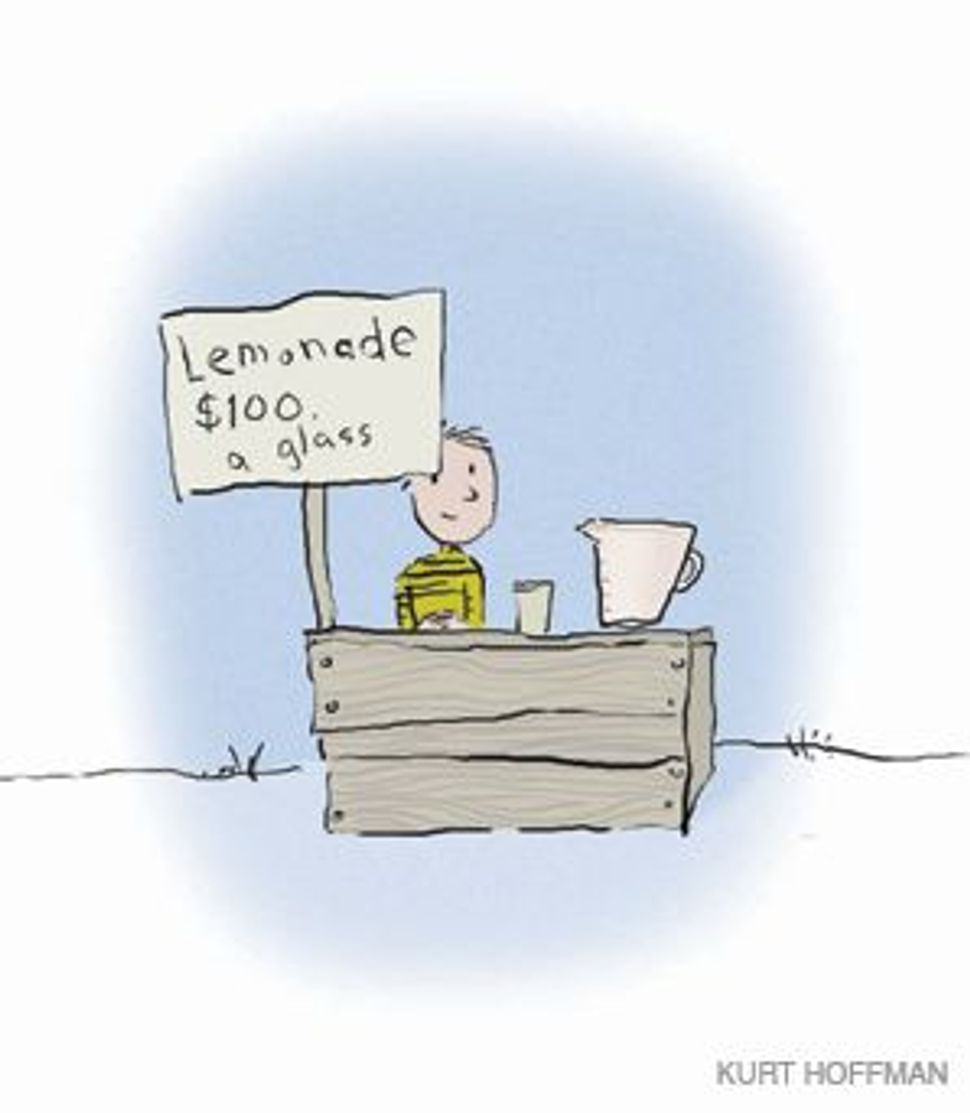 The economy is not doing so hot. Perhaps you’ve heard. Even Josie has noticed that bananas from street carts, which were five for a dollar only a year or so ago, are now three for a dollar. (And she let out a bray of shocked and horrified laughter when I showed her that the four bananas I bought at the hotel gift shop in Walt Disney World cost four dollars — though that price is not a function of recession, but of my idiocy for buying bananas at Walt Disney World.) 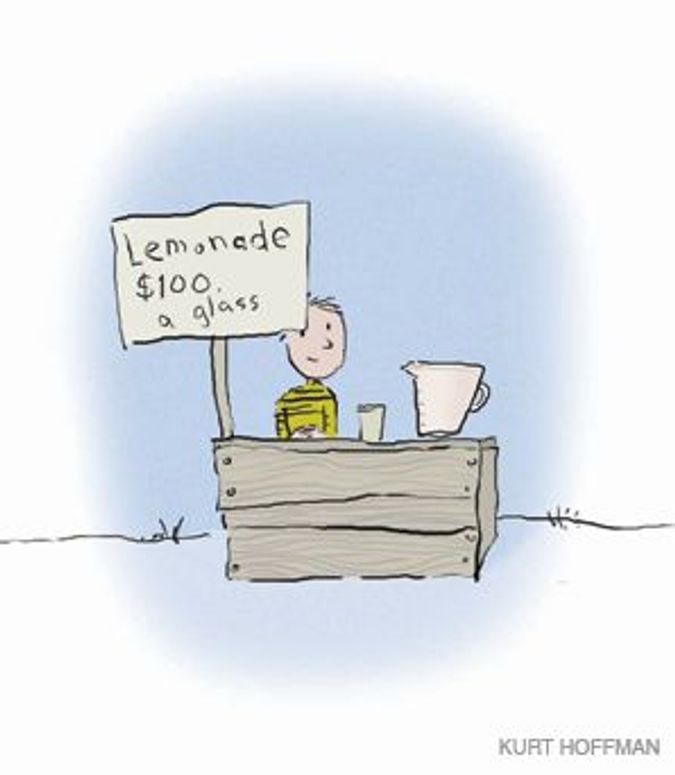 Now, when so many of us are utzing about money, it seems a good time to talk to our kids about personal finance and the value of a dollar. But it’s hard to broach the subject. I, who will talk about sex — loudly and proper-name-ishly — until the cows come home, am uncomfortable talking about money. “Are we rich?” Josie wants to know. “Is Rita poor? Why can’t we have a country house, like Ethan?” I do my best to answer, but even pondering this stuff gives me shpilkes. I know I’m not alone: A survey of American parents of teenagers, conducted by Capital One Financial Corporation last year, found that 36% had never discussed finances with their kids at all. Forty-eight percent had talked about the difference between “needs” and “wants.” Only 19% had discussed budgeting (while 80% viewed themselves as positive money role models — hm, how does that work, exactly?). Talking about money triggers our only-semi-examined issues about greed, covetousness, envy, inferiority. It’s hard to open up to your kids when you’re as mixed-up as cholent yourself.

Kids are simpler. They aren’t ashamed to want, and they are nakedly proud to have. And they really like to sell. The pinnacle of junior-level commerce is that summertime staple, the lemonade stand. Josie’s Trump-y friend Henry set up his first stand last year. He was very clear on the difference between net and gross; he resisted his mother Judith’s urging to zhuzh up the powdered lemonade mix with fresh lemons and mint, because they’d cut into his profits. He kept trying to fill customers’ cups halfway. Instead of making change, which as a wee math genius he is quite capable of doing, he’d give a wide-eyed smile when people gave him a dollar instead of a quarter, and pocket it. He acceded, grudgingly, when Judith told him they’d be giving half the profits to charity. (Though at first, he didn’t know what “charity” meant, and kept asking, “Why do we have to send half the money to Germany?”)

A delightful literary look at the pleasures and pitfalls of citric capitalism is “The Lemonade War” by Jacqueline Davies (Houghton Mifflin, 2007). Jessie and Evan are suburban siblings who battle to sell the most lemonade by the end of the summer. Evan has great social skills but iffy math and planning skills; his younger sister Jessie is a slightly Aspergers-y, socially tone-deaf math whiz. Evan is devastated to learn that his academic-superstar sis will skip third grade and be in his fourth grade classroom in the fall… hence his anxiety and competitiveness. The two learn about marketing, franchising and incentives in their quest to kick each other’s lemon-scented tuchuses. Ultimately, of course, they become closer. The book offers lots of discussion fodder, about both sibling rivalry and finance, and will give kids like Henry plenty of sales ideas. (Did I mention that he also told his mom he wanted to open a steroid store, so he could sell to people who want to be on “American Gladiators”?)

When Josie and her friend Rafa open their own much-discussed lemonade stand this summer, I’ll have them follow Judith’s lead: A chunk of their profits must go to the charity of their choice. (We’ve already discussed a bunch of causes, as discussed in my column on tzedakah a few weeks ago.) How much to give is still an open question: A number of financial experts suggest “the 40-30-20-10 rule” for kids’ own money: Put 40% of your cash into long-term savings; set aside 30% for big-ticket items like an American Girl doll or a scooter; spend 20% on fun impulse buys; save 10% for charity. I think that formula’s a bit rigid.

I’d rather up the amount for charity and let a kid figure out how she wishes to divide the rest herself. Then if she wants something expensive and discovers she’s already pished everything away, too bad. As long as her parents don’t bail her out, lesson learned. And when she gets a bit older, we’ll help her open a bank account so she’ll learn about long-term savings. We’ll also talk about her getting a job. And oy, we’ll have to teach her about credit.

But I’m getting ahead of myself. Maxine, at 3, can’t reliably tell the difference between a nickel and a quarter. She can’t add much beyond two and two. And most experts believe toddlers and preschoolers aren’t old enough to understand budgeting and waiting, because they think in concrete terms. (Maxine thinks that an ATM is a machine that magically spits out money. Josie understands that the money we take out is money that Daddy and I are paid for the work we do, which we put in the bank and tap into for food, bills, fun and tzedakah. She also likes to beg, “Just let me hold a hundred. I won’t run.”)

Maxine is capable of some very basic financial understanding. She knows that money is used to buy goods and services. She sees me pay her sitter at the end of the week. She even understands the notion of brands, and the fact that some people like some brands more than others. (“Rita,” she tells her babysitter fondly, “I’m going to buy you a Lexus.”) And books like Rosemary Wells’s “Bunny Money” (Puffin, 2000) and Judith Viorst’s “Alexander, Who Used to be Rich Last Sunday” (Aladdin, 1987) teach very young kids about saving and spending in an engaging way. Another Rosemary Wells book, “My Kindergarten” (Hyperion, 2004), teaches these lessons even more economically (as it were), in just one page of a fat, delicious volume. “Every week I get twenty-five cents allowance,” says bunny Emily. In a month, she’s saved a dollar, and her grandfather takes her to the store. He buys groceries; she buys “fake nails for Eloise, Bubble Trubble for Leo, and a magic ring for me. Grandpa and I put my last quarter in the Animal Rescue Tin.”

“We have bought what we need.

“We have given to others.”

And that’s what it boils down to, isn’t it? In our competitive, consumerist culture, we get all roiled up with the whole question of what, exactly, constitutes necessity. But especially in a time of recession, we should teach and remember that if we have Grandpa, groceries, a packet of fake nails for our friends now and then, and the ability to give tzedakah, well, we’re doing okay.