USCJ Wants To Bring ‘Indie Minyans’ Into the Fold. But Will They Join? 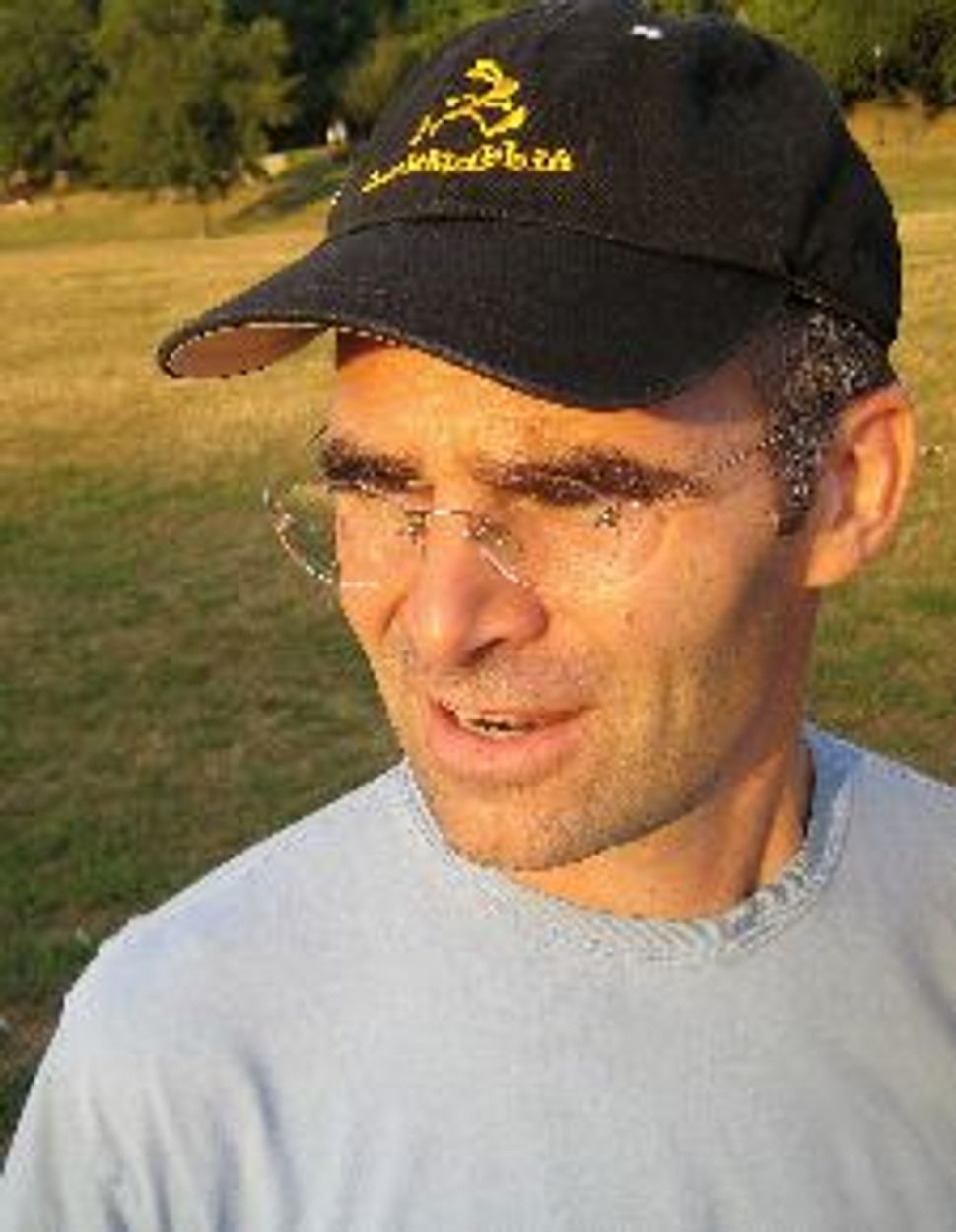 Next Gen: Rabbi Andy Bachman houses an independent minyan in his synagogue. Image by Courtesy of Andy Bachman

The draft strategic plan issued by the United Synagogue of Conservative Judaism in February set outreach to the independent minyanim as a goal of the movement. Though their numbers are small — a 2009 survey cited about 60 new lay-led independent minyanim in the United States and Canada — the Conservative leadership says that it sees in their membership a highly committed young cohort whose background and worship style are closer to the Conservative movement than to any other denomination.

Though previous generations of independent prayer groups have, at times, grown into close relationships to mainstream Conservative synagogues, it may be too early to tell whether the newer independent minyanim will accept the movement’s overtures over the long term.

Some members, though, already say they aren’t interested. “Our standards are too high,” said Aaron Bisman, a founder of the 5-year-old independent Altshul minyan in Brooklyn’s Park Slope neighborhood and president and CEO of JDub Records, the not-for-profit Jewish label. “And we have the skills amongst us to do it on our own.”

The independent minyanim that have popped up in such cities as New York, Philadelphia and Boston over the past decade lack a leader or a rabbi, but their members are often highly knowledgeable in Jewish prayer and practice. Their style varies, but they are largely egalitarian. And though they may claim to be post-denominational, their religious outlook and background are often closest to the those of the Conservative movement.

In its strategic plan, the USCJ describes a rethinking of the definition of a Conservative synagogue in order to make space for the independent minyanim and other alternative prayer communities. Congregations within the USCJ will no longer be referred to by the movement as synagogues, but rather as kehillot, or sacred communities. The USCJ believes that this shift “signals a welcome to those who resonate with the ideas of Conservative Judaism” but do not belong to Conservative congregations, according to the plan.

The document also calls for outreach to the independent minyanim. “Supporting them today could help build Conservative kehillot tomorrow,” the plan states.

“The Conservative movement has been very oriented towards explicit standards for what qualifies as sufficiently Conservative, which makes sense for a mid-20th-century movement,” said Steven M. Cohen, a prominent sociologist of the American Jewish community, senior counselor to Jewish Theological Seminary chancellor Arnold Eisen and a consultant to the USCJ during the strategic planning process. “But as the world has moved to a postmodern, postcorporate, postcollective ethos, explicit standards and highly articulated norms lose their usefulness in framing a movement.”

Rabbi Steven Wernick, executive vice president and CEO of the USCJ, was traveling and unavailable for comment.

The launch of the current wave of independent minyanim is often traced to the 2001 founding of Kehilat Hadar on Manhattan’s Upper West Side, now a vibrant community with an affiliated institute and yeshiva. But the new independent minyanim are not the first Jewish prayer communities to reject the synagogue structure of America’s liberal denominations. In the 1970s, spurred on by the 1973 publication of the “The Jewish Catalog,” a guide to homebrewed Jewish practice, havurot, or prayer groups, were formed in communities around the country.

One of those groups, called Minyan Ma’at, is now affiliated with Anshe Chesed, a Conservative synagogue on Manhattan’s Upper West Side, and is attended by both Eisen and Rabbi Daniel Nevins, dean of the JTS’s rabbinical school. In an e-mail, Nevins said that he is a member of both Anshe Chesed and Minyan Ma’at, and considers the rabbi of Anshe Chesed to be his rabbi.

In the years after its founding, the Germantown Minyan split into two lay-led minyanim: the more traditional Minyan Masorti, and another, called Dorshei Derekh. The relationship among the communities has not been without its bumps — most significantly, in the eyes of Gordon, the moment during his tenure when Dorshei Derekh chose to affiliate with the Reconstructionist movement. The minyan is attended by professors of the Reconstructionist Rabbinical College, which is near the synagogue, and Gordon said that there were concerns among the Conservative members of the synagogue that they were losing control of the institution.

“You have to be willing to appreciate a little diversity,” Gordon said.

Despite their disparate movement affiliations, nearly all the people who attend the minyanim at Germantown Jewish Centre are now dues-paying members of the synagogue.

“There are reasons that people choose to daven separately, but we share the synagogue community together,” said Rabbi Adam Zeff, Germantown’s current spiritual leader. If the minyanim at Germantown are well established, Altshul is the opposite. Founded in Brooklyn in 2005 by a group of 20-somethings, the egalitarian minyan was conceived on a summer night in a bar in Brooklyn’s Prospect Heights.

“We wanted to be very focused on a quality davening experience,” said Bisman, who was 25 when the group formed. After bouncing between two Brooklyn apartments, the minyan eventually found a home at Congregation Beth Elohim, a Brooklyn Reform congregation led by Rabbi Andy Bachman. Bisman and others knew Bachman from New York University, where he had been the Hillel rabbi while they were students.

Bisman and Bachman say that Altshul has pitched in with funds at certain times over the past five years — to help repair a Torah scroll, to help fix a synagogue roof. “But they don’t see themselves as obligated towards a larger body of the community,” Bachman said. “From my perspective, that’s part of the dance in engaging the younger generation.”

Other young independent minyan leaders agreed. “It’s great that they’re welcoming communities that wish to join,” said Ben Dreyfus, a doctoral student at the University of Maryland and a founder of the Kol Zimrah minyan in New York. But, he said, “the independent minyanim that I’m familiar with, I don’t think any of them would be likely to take them up on that offer.”

Others worry that affiliation with the Conservative movement might scare off independent minyan members from more traditional backgrounds. “It’s great that they’re opening their doors,” said Meg Lederman, a teacher at a Jewish day school in Watertown, Mass., and a leader of the independent Washington Square Minyan, which meets in Brookline, Mass. But she said that her minyan likely wouldn’t be interested. Many of the minyan’s 70 to 100 regulars come from Orthodox backgrounds and, Lederman said, wouldn’t necessarily be comfortable if the minyan identified itself as Conservative.

Asked how the USCJ plans to get past such resistance, Cohen holds out hope. “The strategic plan, because it can’t, doesn’t offer a highly detailed plan of how to reach out and build relationships with kehilot of various persuasions, But it does clearly say that we need to build relationships with people who reflect some of the highest principles of Conservative Judaism,” he said. “But only if both sides, and all sides, find these relationships mutually interesting and beneficial. If they don’t, they don’t…. But it seems like there are common values, common origins and common interests that can serve as a basis of a mutually rewarding relationship.”

USCJ Wants To Bring ‘Indie Minyans’ Into the Fold. But Will They Join?