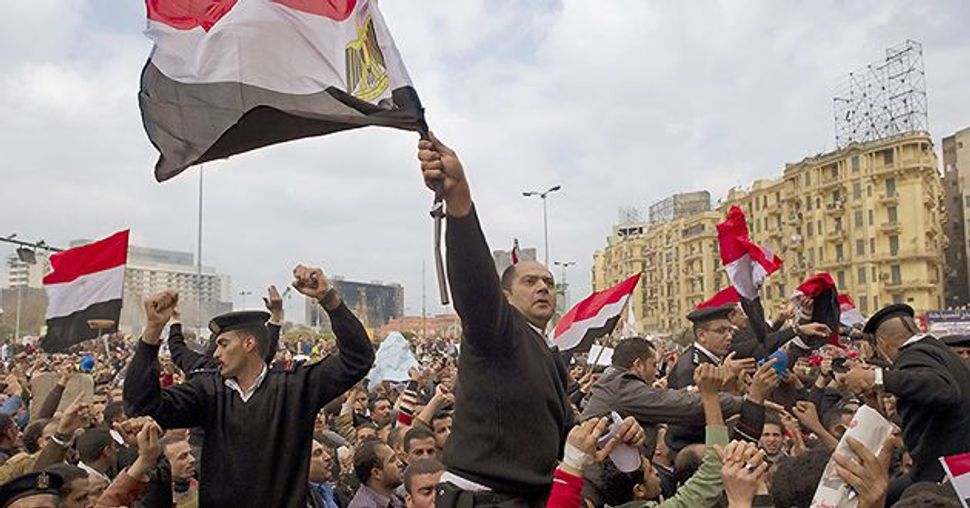 ?Children of Liberty? send a message: Musicians in Israel record a song of support for Egyptians (below) who protested in Cairo. ?Our hearts beat with you in the square,? the Israelis sang. Image by Aviv Perez

The Egyptian revolution has kicked open the door to a vast Arab population that, for the first time, is poised to influence the course of its country’s policies directly. For Israel’s supporters, this could mean a new frontier for public diplomacy and a chance to reach out to Arab masses.

But the new reality emerging in the Middle East also requires a change in mindset. Israel has only a handful of Arab-language specialists dealing with public diplomacy aimed at the Arab world, a number that pales in comparison with the battalions of foreign service staffers serving in the same role in the United States and Europe.

Similarly, Jewish groups, which in the past have led the way to winning hearts and minds across the world, are now grappling with how to address the rise of public opinion as a crucial factor in the Middle East — a matter of pressing importance not only in Egypt as it moves to democratize, but also in Turkey, where democratization has already had a major impact on government policies toward Israel.

Going forward, the challenge of dealing with states in the Middle East as if their citizens matter promises only to increase if the push for democracy that has already brought down dictatorships in Egypt and Tunisia spreads.

“We need to look at the opportunity and the promise,” said Jennifer Laszlo Mizrahi, founder and president of The Israel Project, which has been among the very few groups to engage in outreach to the Arab world. “We need to ask how can we make it good for the Jews.” 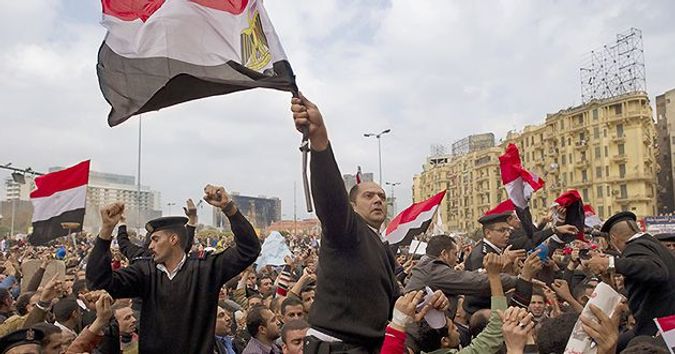 In the meantime, pro-Israel activists are getting used to a new language when communicating with the Arab world. It includes stressing the financial benefits of peace and the shared value of freedom. At the same time, it ignores the ongoing conflict with the Palestinians. Israel, in this new public diplomacy reality, is no longer referred to as the “only democracy” in the Middle East, but rather as the “most stable democracy” in the region, pro-Israel activists said.

Israel’s attempts to reach out to the Egyptian people during the 30-year rule of Hosni Mubarak, the country’s recently ousted president, were varied but largely rebuffed. “The civil society turned down any attempt to engage with Israelis, and professional organizations boycotted members who had ties with Israel,” said Yigal Palmor, spokesman for Israel’s Foreign Ministry. The Israeli efforts included cultural activities coordinated by the Israeli academic center in Cairo, agricultural and trade cooperation and Internet-based outreach.

“Our public diplomacy message to the Egyptians,” Palmor added, “is that we are neighbors and we want good neighborly relations.”

For The Israel Project, which focuses on educating journalists about the Jewish state, Egypt represents an opportunity to broaden the scope of public diplomacy to hundreds of millions in the Arab world. The group recently doubled its Arabic language staff and has made Egypt a top priority. TIP already has some 700 Arab journalists that follow its Arabic-language Facebook page, and it conducts regular public opinion polls to gauge feelings in the Arab world toward issues relating to Israel.

“We mustn’t miss this opportunity,” said Shimrit Meir, director of TIP’s Arabic media program. “There is chaos now in Egypt; all the cards have been reshuffled, and we can find new openings.”

Meir, an Arabic-speaking Israeli who is based in the organization’s Israel office, said that the message that needs to be delivered to young Egyptians is that peace with Israel has been beneficial to Egypt and will continue to be in that country’s best interest.

“Now is the time to say to the Egyptian people, ‘You need to choose between another war with Israel or more trade and prosperity,’” Mizrahi added.

Few other groups appear to have put much effort into addressing Arab public opinion prior to the downfall of Mubarak. The American Jewish Committee, for example, which maintains offices in locales from Berlin to Mumbai with the mandate of engaging these populations on behalf of American Jewish concerns, including Israel, has no such office in the Middle East.

AJC officials say they have maintained ties with Egyptian leaders and diplomats during the Mubarak years and intend to continue this practice in the future. But the group’s message to the Egyptian people in the post-Mubarak era is less celebratory and more focused on common interests. “We expect the new Egypt to seek stable relations with the U.S.,” said Jason Isaacson, the group’s director of government and international affairs. He added that so long as the new government in Egypt will be interested in peace with Israel, the Jewish community will lend its support.

Meanwhile, TIP and the Israeli government are working under the premise that the Palestinian conflict and the lack of progress in attempts to resolve it should not impede efforts to reach out to the Egyptian public. “It is not an issue for them,” Meir argued, referring to the Egyptians who led the revolution.

Not everyone agreed with that viewpoint. “For a long time, countries like Turkey and Egypt were ruled by men more interested in pleasing the United States than their own people, and as a result, they shielded Israel from their people’s anger,” Peter Beinart wrote on the news website The Daily Beast. “What Israel desperately needs is to begin competing for Middle Eastern public opinion…. And really competing means reassessing policies, like the Gaza blockade, which create deep — and understandable — rage in Cairo and Istanbul without making Israel safer.”

But a recent poll commissioned by the Washington Institute for Near East Policy might offer evidence for TIP’s view that these issues are not crucial. According to the poll, taken during the days of protest in Cairo’s Tahrir Square, only 3% of Egyptians saw the Mubarak regime’s close ties with Israel as a reason for the uprising. For most, the revolution was about economy, corruption and unemployment.

Still, David Pollock, the senior fellow who directed the poll, warned that while the Palestinian issue is not high on most Egyptians’ list of priorities, the conflict should not be ignored. “It will be difficult [for Israel] to establish a good dialogue without addressing the Palestinian issue,” said Pollock, who previously worked on Middle East public diplomacy efforts at the State Department. He added that there is still a “widespread negative view of Israel” among Egyptians, and urged a “gentle and low-key approach” by supporters of Israel when reaching out to the Egyptian public.

But for some, the community’s cautious reaction to Egypt’s popular uprising is not enough. Michael Feldman, a Los Angeles attorney, wrote an open letter to the Egyptians. Thus far, the online letter has gained 200 signatures.

“We harbor deep hopes for the Egyptian people and the many citizens rising against ruthless regimes around the world,” the letter states.

Feldman said he was concerned that the Egyptian people are hearing the Jewish community focus too much on the negative aspects of the events instead of on the revolution’s achievements. He pointed to a similar grassroots initiative coming from Israel. That initiative, a musical project titled “Children of Liberty,” is described as “a message of support to our Egyptian brothers and sisters.” The song lyrics offer friendship to the Egyptian people, promising that “beyond big words, we just want to share. Our hearts beat with you in the square.”