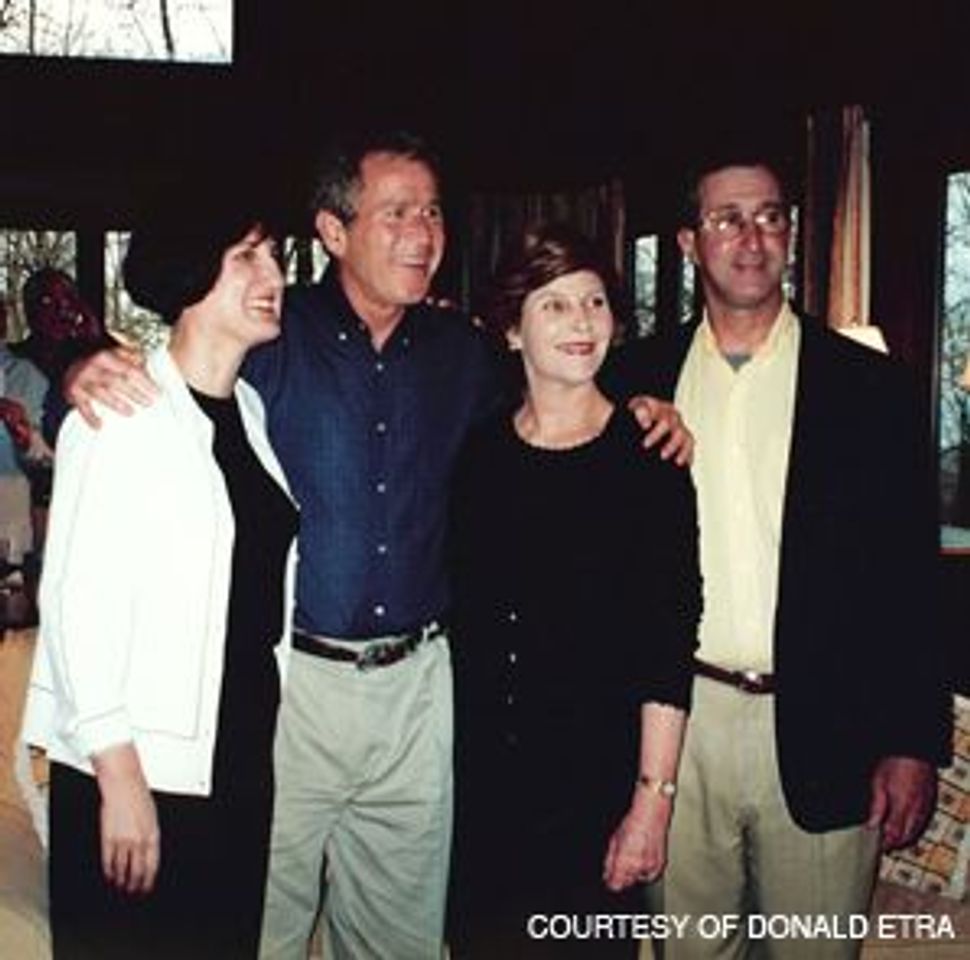 CHUMMY: George and Laura Bush with Donald and Paula Etra at Camp David.

Los Angeles – When attorney Donald Etra was invited to join President Bush at Camp David for a spring weekend in 2005, the invitation put him in a quandary. It was already Friday afternoon, and Etra, an Orthodox Jew, feared that if he traveled by car from the White House as planned, he’d never make it to the presidential retreat by sundown. 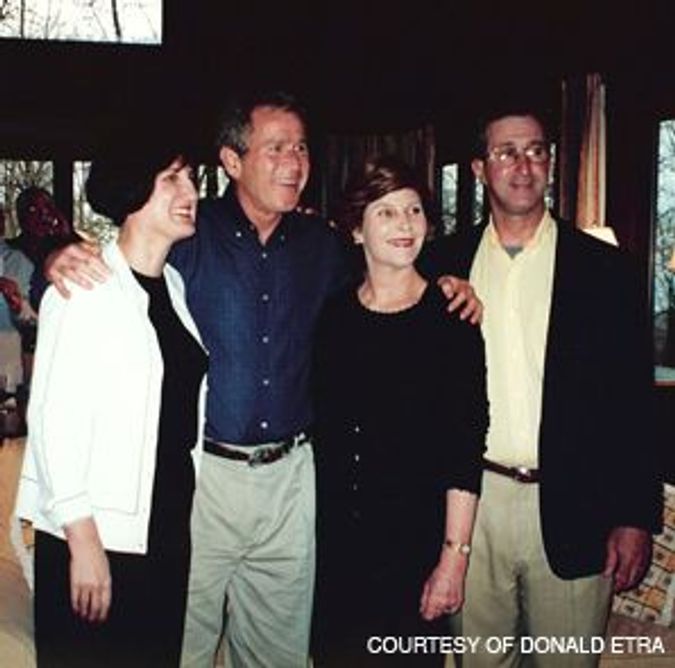 CHUMMY: George and Laura Bush with Donald and Paula Etra at Camp David.

The solution: Bush stepped in and offered to fly Etra and his wife, Paula, to Camp David in his helicopter, in order to ensure that they would get there by the start of the Sabbath.

Etra, 60, a high-powered Los Angeles criminal defense lawyer, has known Bush since the two men were friends at Yale University. Members of the class of 1968, the two pals joined Skull and Bones, the prestigious secret society. The future president even traveled once to Manhattan’s Upper East Side from New Haven, Conn., to share a Sabbath meal with Etra’s family.

They have maintained the friendship ever since. Last month, Etra was one of 79 members of the president’s delegation to Israel in honor of the Jewish state’s 60th anniversary. In 2003, the president sent him to Poland to represent America at the 60th anniversary commemoration of the Warsaw Ghetto Uprising. This past spring, Bush reappointed Etra to his second five-year term on the United States Holocaust Memorial Council.

What is particularly striking about Etra’s long friendship with Bush, and his reputation as one of the president’s closest Jewish associates, is the rather less publicized fact that Etra is, by his own description, a liberal Democrat.

As the Bush administration winds down, Etra spoke with the Forward about everything from the president’s take on Purim to why Etra remains fiercely loyal to Bush despite their political differences. A member of two Modern Orthodox synagogues in L.A.’s Pico-Robertson district, Young Israel of Century City and Beth Jacob Congregation, Etra boasts a star-studded client list that includes the likes of rapper Snoop Dogg and actress Fran Drescher. He recently represented the Spinka rebbe, a Brooklyn Hasidic leader, at a bail hearing related to charges that the rabbi defrauded the government of millions in tax dollars.

Rabbi Chaim Seidler-Feller, Hillel executive director at the University of California, Los Angeles, and a former client of Etra’s, described Etra as “a liberal Orthodox Jew with a very rational worldview.”

“My sense is that he’s a type of careful liberal, an-old style Democratic liberal,” Seidler-Feller said. “Meaning that on social issues, on abortion and so on, he follows the line, and he’s careful — meaning, he has limits.”

Seidler-Feller noted, however, that Etra is careful to keep a low profile on political matters. “He plays things close to the chest,” Seidler-Feller said. “He’s not out there.”

If Etra’s publicly reported contributions don’t reveal much about his leanings, other hints along the way speak volumes. He was a supporter of the recalled Democratic ex-governor of California, Gray Davis. He is pro-choice. In the early 1970s he co-authored a book on Citibank with Ralph Nader, then known for his firebrand consumer advocacy.

How does Etra remain close — he’s a frequent White House overnight guest — to a president who opposes so many of the causes he holds dear? Etra offered a simple answer: “Friendship trumps politics.”

On at least one issue, however, Etra and the president are in complete accord. “We have no disagreements about his view on Israel and his affection for the Jewish people,” Etra said. “I think this president has been better than even Harry Truman in terms of Israel.” It helps that Etra, notwithstanding his liberal leanings, supported the Iraq War. As he put it: “I’m a supporter of pre-emptive strikes against evil.”

Asked how he felt about the president’s May 15 speech to the Knesset, which was widely viewed as an indirect attack on Barack Obama, Etra insisted that the president was not chastising anyone in particular. The attorney said that when Bush took a swipe at those who support “appeasement” and compared them to Western leaders who appeased Hitler in the run-up to World War II, he was simply making a point. “I do not believe they were directed at any political candidate,” he said, referring to Bush’s Knesset remarks. “It was a wonderful speech, extremely supportive of Israel, and clarified the president’s policies. It was truly an inspiring moment.”

Etra has not yet pledged support to any presidential candidate this year, saying both McCain and Obama have, in his view, been highly supportive of the Jewish state.

While Etra himself expresses no reservations about his close relationship with Bush, one L.A. Jewish insider argued that it cannot be easy for Etra, given his liberalism. “He probably swallows hard,” the observer said. Still, this insider added, there are significant benefits to Etra’s unflagging support of Bush: “You would tell anyone in that situation to remain loyal, because that influence could be important. You don’t ever want to compromise your influence.”

Several decades ago, during the Reagan administration, the future president was in L.A. for Etra’s wedding and attended the oyfruf, the Jewish ritual in which a groom-to-be is called up to the Torah on the Sabbath before his wedding. At the time, the elder George Bush was vice president, and Etra recounted how impressed the younger Bush was with the fact that the Orthodox congregation said a prayer for the president and the vice president on a weekly basis.

At Purim time two years ago, Etra had an opportunity to explain to the president the meaning of the feast of Esther. Etra was staying overnight at the White House the day after the celebration, and one of the president’s daughters asked whether he’d observed the holiday. When Bush asked for an explanation of Purim’s significance, Etra summed it up succinctly. “I said it was about a crazy guy in Iran who wanted to kill all the Jews,” Etra said. “And the president remarked that not much has changed.”