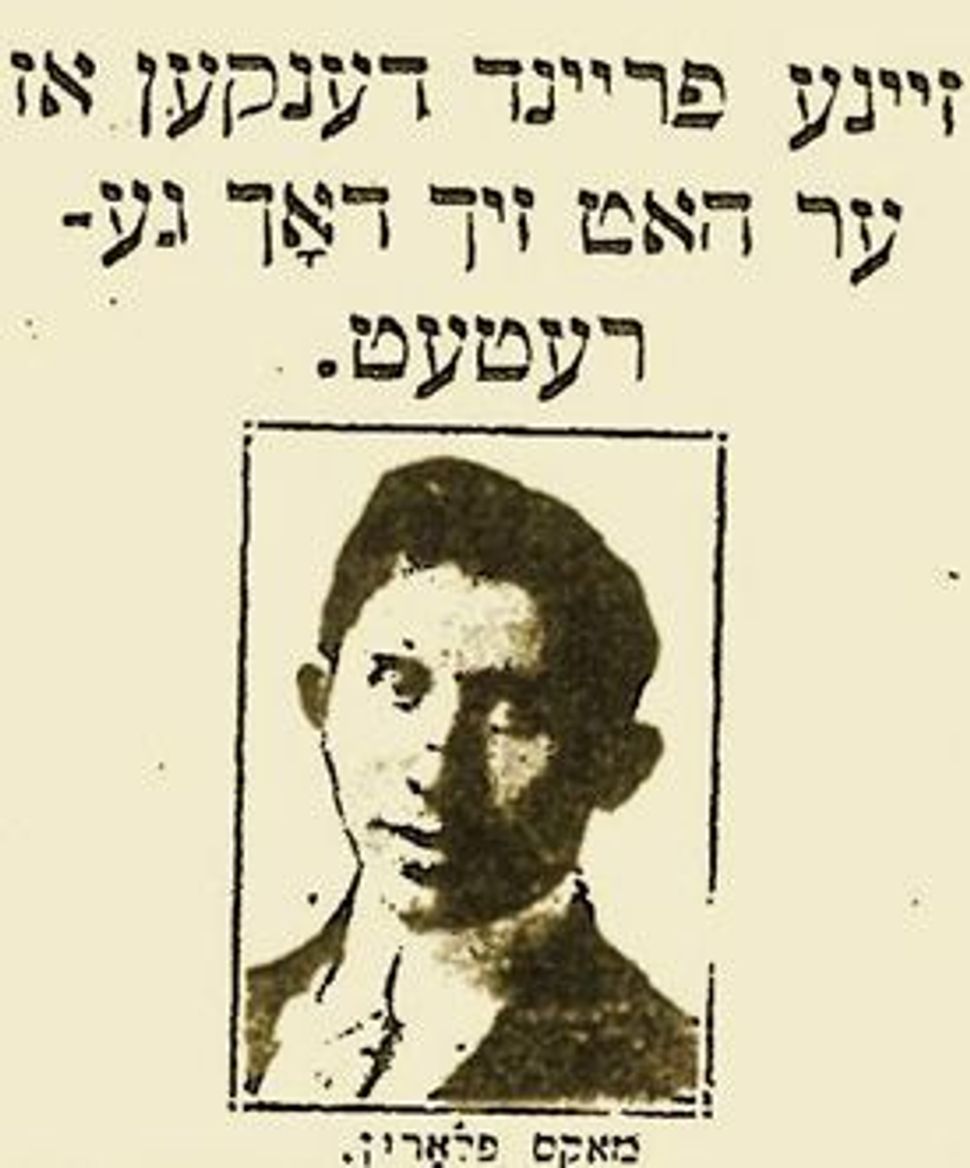 Max Florin, whose young visage was published on the inside pages of the Forverts in the aftermath of the Triangle Shirtwaist Factory Fire, has been named in an HBO Films video as one of the six unknowns who were buried in a mass grave nearly 100 years ago.

The identities of the six has long been the enduring mystery of the tragic fire that claimed the lives of 146 blouse makers, most of them young Jewish and Italian immigrant women, who were trapped by flames March 25, 1911. Nearly 60 of them jumped to their deaths from the windows of the ninth floor of the factory in the former Asch Building, half a block east of Washington Square in Manhattan.

Historian Michael Hirsch, who co-produced the HBO on Demand exclusive “Triangle: The Unidentified,” is credited with identifying the six who were burned so badly that they could not be identified by friends and family. In the video, Hirsch is shown reading microfilm reels of newspapers of the day, including the Forverts.

The paper, written in Yiddish and circulated widely on the Lower East Side, where most of the victims of the fire had lived, printed dozens of tales of those who had perished, those who were missing and those who survived the horrific fire. Florin’s black-and-white photo was printed in thumbnail size, along with a one-paragraph story, on March 28, 1911, under the headline “His Friends Think He Was Rescued.”

The entire story, translated from the Yiddish, read: “Max Florin’s friends think he was able to save himself, but due to incredible fear and anxiety he’s lost his mind and is wandering the streets. Max is 23 years old and of average height. He was wearing a black suit. His closest friend is Max Hershenson of 14 Avenue A. If any rescued workers of that accursed shop know of his whereabouts, please let us know.”

Hirsch pointed to the article as a clue that led to Florin’s identification. The other five victims who had been nameless were also identified in the video. They were Concetta Prestifilippo, Fannie Rosen, Dora Evans, Josephine Cammarata and Maria Lauletti.

Up until now, they had been known only as the victims whose remains had not been claimed in the temporary morgue set up after the fire, and who were quietly transported by horse-drawn hearses April 5, 1911, to the Cemetery of the Evergreens in Brooklyn. According to the 1962 book “The Triangle Fire” by Leon Stein, eight hearses carried the caskets of seven unknowns to the cemetery that day. The eighth hearse carried human fragments picked up at the fire scene.

A year later, Salvatore Maltese identified one of the bodies as that of his wife, Catherine, who had died in the fire along with two of their daughters. Her body was exhumed and removed to a family plot. That left six, long gone but not forgotten, and now no longer nameless.

The New York Times, which first reported the story of Hirsch’s discovery, said that no one interviewed so far had made a decision about whether to remove the bodies and bury them with family members. The Times said Hirsch had become obsessed with finding all the names after he realized that one of the fire’s victims, Lizzie Adler, had lived on his block in the East Village.