Reflections of a ‘Pussycat Dad’ 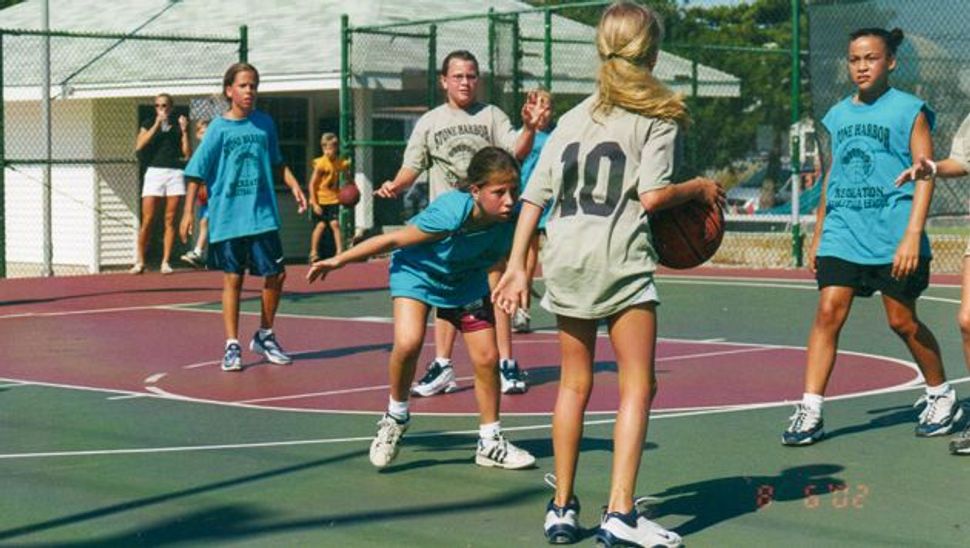 High Praise, Low Score: Strauss?s parenting method includes lauding his daughters even when they come in dead last or are the low scorers in sporting events. Above, Ella (center, blue shirt) guards a much taller competitor. Image by courtesy of robert strauss

When my elder daughter, Ella, was about 11, she worked up the courage to join our summer swimming pool’s diving team, despite being a carrier of the family gene for aquaphobia.

The first dive meet of the year was at another pool, to which most of Ella’s friends belonged. They were all veritable flying fish — speedy at swimming, and acrobatic off the board. Ella managed a 26th place. Out of 26.

I immediately launched into a flowery speech about how proud I was of her to just gut it out, especially in light of it being in front of her more talented buddies. I still remind her that I believe it was one of the signal moments of her athletic career.

On the other hand, Amy Chua, author of the recent memoir “Battle Hymn of the Tiger Mother” (Penguin Press), might have excommunicated Ella. Chua has been both lauded and vilified of late for advocating a strict “Chinese” upbringing for her two teenage girls — one who is the same age as Ella and the other as my younger daughter, Sylvia. No sleepovers and no play dates. Laugh at your peril.

I, too, have a memoir, due in April —“Daddy’s Little Goalie” — about being the perplexed dad of girl jocks in the 21st century. If Chua, though, is the Tiger Mom, I am the Pussycat Dad.

When I was growing up in New Jersey in the 1950s and ’60s, boys played sports, and girls, well, who knows? For girls, basketball was played in bloomerlike uniforms and had six on the court — only two of whom could play both ends of the floor, presumably because most couldn’t make a whole game without keeling over. The girls’ lacrosse teams had one more member than the boys’ team, and no stick checking. Girls were banned from Little League baseball, but they could play softball, again with one extra player and balls so squishy they couldn’t possibly sting.

But as soon as my girls started playing sports, I was smitten. Everything was a high. Sylvia was the goalie on a soccer team that scored all of one goal the whole season. I went to every game, and when the team lost only 2–0, I couldn’t wait to tell my wife the “good news.” After a basketball game, I put my arm around Sylvia and praised her for being the high scorer — with one point. (Someone made the mistake of fouling her as she lofted a shot at the halftime buzzer, and she made one of two from the foul line — as her team lost only 44–1.)

My parenting style, I think, derives from the father of the main character, Alvy Singer, in the Woody Allen flick “Annie Hall.” Outraged that his wife fired the cleaning lady for stealing, Alvy screams: “She’s a colored woman from Harlem! She has no money! She has a right to steal from us! After all, who is she gonna steal from if not us?”

Maybe it is a Jewish dad thing, but when it comes to my girls, there are no evils, just misfortunes looking for a good spin.

In her last two years on the Haddonfield Memorial High School basketball team, Ella, at 5-feet tall, was perhaps the smallest player in the state of New Jersey. Naturally, everyone cheered when she came into a game, even though she rarely scored. Chua might have wretched. I only beamed. One time, she coxed a Haddonfield lightweight crew boat to 12th place in a national race. Chua might have taken an ax to that shell. No previous Strauss had been 12th in anything national — and probably wouldn’t have, even if that nation were Liechtenstein. I couldn’t hug her enough.

The girls didn’t have all 44–1 days. Ella was a captain, and Sylvia a freshman, on Haddonfield’s state championship-winning tennis team. Ella (now 19) got college scholarship offers to cox crew in college, and Sylvia (now 16) has gone hither and yon for select lacrosse teams. So they, and I, have seen the field and the court from all angles.

I have never been the desperate sports dad, screaming at refs and pouting over that vaunted 21st century youth-sporting ill, “playing time,” which for many parents perhaps like Chua, like wife jokes to Henny Youngman, too much is never enough.

I still play basketball almost daily myself — and most often as the worst guy on the court. One of my cohorts, a former Philadelphia Catholic League star who has toddlers, asked me how it was watching my kids play. I told him: “You see those other nine kids on the court? Well, they are in drab black-and-white, and your kid is in fabulous Technicolor.”

If sports are often considered a metaphor for life, then my way of parenting through sports is as important as Chua’s, with her no-sleep-over zone. My kids have learned organization, teamwork and that Dad will always have their backs.

Robert Strauss’s memoir about being the father of girl athletes, “Daddy’s Little Goalie,” will be published in April by Andrews McMeel Publishing.

Reflections of a ‘Pussycat Dad’