In New Book, Grave Robbing and Other Stories of Poles’ Complicity 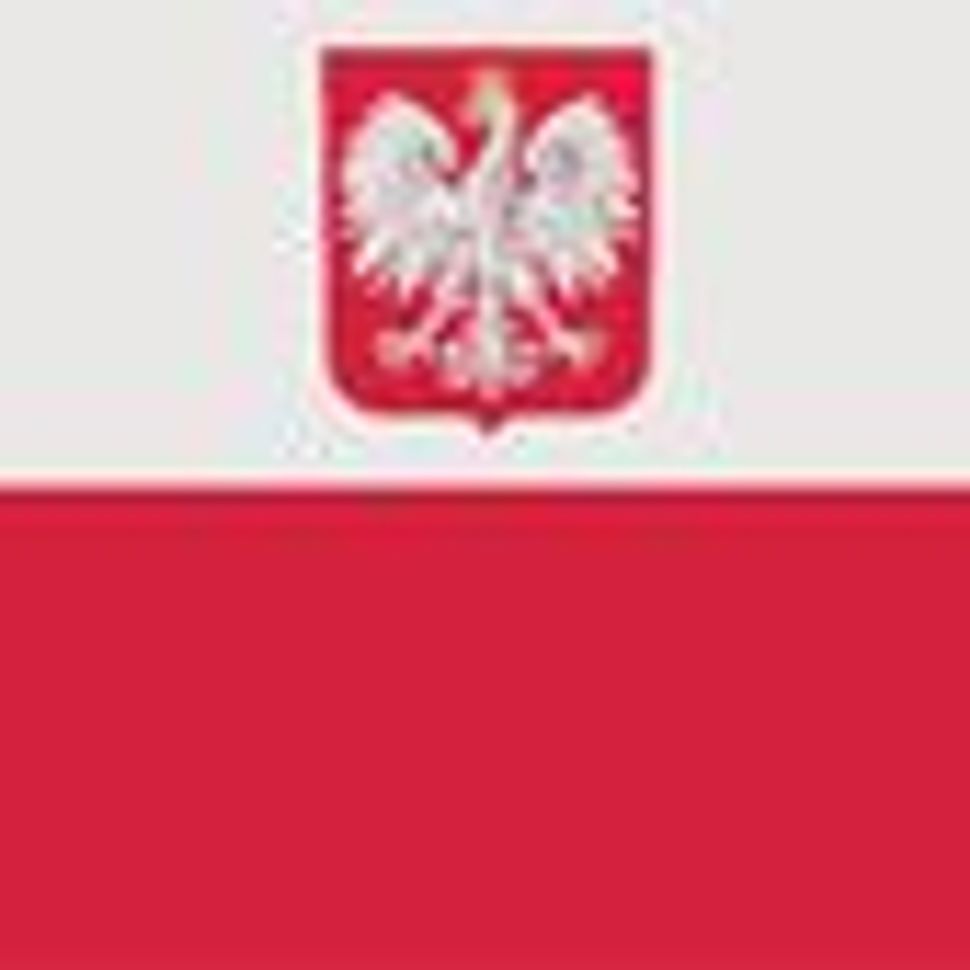 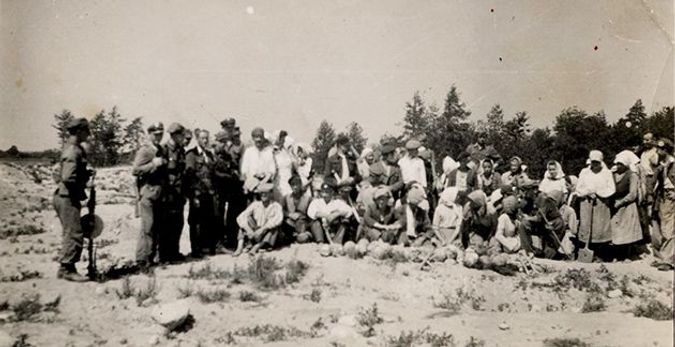 ?Golden Harvest?: Polish peasants with skeletal remains at Treblinka, where Gross said they dug for gold and jewels in the killing fields. Gross said the photograph was the starting point for his new book. Image by Gazeta Wyborcza

Jan Gross is once again forcing Poland to take a new look at its past.

The Polish-American historian, whose previous books generated heated controversy and self-examination, has written a searing new indictment of Polish behavior toward Jews during World War II.

“Golden Harvest,” a new book by Gross and his former wife, Irena Grudzinska-Gross, charges that some Poles tried to profit from the Holocaust by digging for gold and jewels in the killing fields at Treblinka, the Nazi death camp where Germans murdered more than 800,000 Jews.

The book, which will be published in Poland on March 10, also accuses Poles of looting Jewish property.

“Poles accepted the fact that Jews were going to be destroyed,” Gross, a Princeton University historian, said in a telephone interview with the Forward. “The Poles participated in the murder of Jews, and this was done all over the country.”

In response, some of Poland’s right-wing media have branded Gross as anti-Polish.

“Jan Tomasz Gross has earned the deserved name of an untiring enemy of Poland and Poles. A swindler and a cheat,” Jerzy Robert Nowak wrote in the February 2 edition of Niedziela, a Roman Catholic publication distributed in churches.

“There is no place in Gross’s book for decent Poles, not an example,” complained a writer in the far-right tabloid Nasz Dziennik. “He only describes barbarians and villains. The purpose of the book is to make the American elite see Poles the way Jan Gross sees them.”

When asked about criticism of his work and about the allegations that he is anti-Polish, Gross responded gruffly: “This is all nonsense.”

Gross, who was born in Poland shortly after World War II, is no stranger to Polish readers. Born to a Jewish father and a Catholic mother, he fled his native country in 1968 because of an anti-Semitic campaign conducted by the Communist Party.

Gross has published two other books whose negative images of Poles provoked anger in the country of his birth.

“Neighbors: The Destruction of the Jewish Community in Jedwabne, Poland,” published in 2001, investigated the 1941 massacre of about 1,600 Jewish villagers by their Polish neighbors. Poles were outraged when a government commission confirmed Gross’s findings.

A later book, “Fear: Anti-Semitism in Poland After Auschwitz,” published in 2006, asserted that Poles persecuted and murdered Jewish survivors.

Despite the controversy over “Golden Harvest,” Gross is not the first scholar to bring to light the Polish conduct at Treblinka. “The book is a synthesis of information uncovered by young Polish scholars,” said Michal Bilewicz, director of the University of Warsaw’s Center for Research on Prejudice. Bilewicz, who read a review copy of the book, said during a phone interview with the Forward that this information is little known outside Poland.

Gross acknowledges getting much of his material from Polish scholars who have conducted “excellent work” about Polish-Jewish relations during the war. “Much of this material has not been published in English, and it adds to our knowledge of Polish complicity in the murder of Jews,” he said.

The book also includes a photograph of Polish peasants at the edge of the gravesite at Treblinka, which previously had been published only in Gazeta Wyborcza, a leading Polish daily newspaper.

According to Bilewicz, Gross said in the book that the Polish behavior at Treblinka was criminal and abhorrent, but not inspired by anti-Semitism. “Gross says in the book that all of us are capable of committing the same crimes — if faced with the starvation the peasants experienced,” Bilewicz said.

Martyna Rusiniak-Karwat, a Warsaw University historian and author of a book on Treblinka, gave “Golden Harvest” a mixed review. “He based his book on work done by others, and used sources only selectively, including mine,” she told the Forward in a phone interview, through an interpreter.

Rusiniak-Karwat, who comes from a village about 20 miles from Treblinka, told the Polish daily Rzeczpospolita that as a child, she heard stories about Poles looking for gold that belonged to Jews murdered at Treblinka.

“When I started my research,” she said, “I found records on digging the mass graves, and that was shocking to me. I know they were searching the graves, but I didn’t have the slightest idea they went that far.” Her book “Extermination Camp Treblinka 2 in Social Memory, 1943–1989” was published in 2008.

“The peasants didn’t think of the place as a Jewish graveyard.” Rusiniak-Karwat said. “They were driven by the desire to reap a profit. They were depraved and deprived of all normal standards.”

Amid the anger Gross’s book has provoked, his inclusion of the photograph purporting to show Polish peasants searching for valuables among the dead has been especially provocative. The photograph, of which the origins are uncertain, first appeared in the January 8, 2008, edition of Gazeta Wyborcza.

Konstanty Gebert, a columnist for the newspaper, told the Forward in an e-mail: “There is a controversy about that photo and Gross acknowledges it. The photo either represents diggers, or people who were collecting human remains for future disposal.”

Rusniak-Karwat raised similar doubts. “Jan Gross used the picture as his primary evidence,” she said. “And we know little about its origin.”

Gross said he first saw the picture in Gazeta Wyborcza and learned that it had been given to a museum at Treblinka in the 1960s by an employee of a local railroad station. The photograph was the starting point for his book.

“On the surface, it appears to be a very banal photograph,” he said. “But when you realize that the crops in front of [the peasants] are not beets or potatoes but skulls and bones, that is a very freaky experience,” he observed.

Henryk Wozniakowski, president of Znak, said at a news conference in Warsaw on February 8 that the book was being published to “revise our memory and confront it with historical truth.” He said charges that the book is anti-Polish are groundless, and that profits from its sale will be donated to charity. “We don’t consider this book a business project,” he noted. The first printing will be 50,000 copies.

But the controversy over the book has also sparked internal conflict at the publishing company. Znak Director Danuta Skora said at the same news conference that she was opposed to publishing the book. According to a report in Gazeta Wyborcza, she called the book “unjust” and apologized to Poles who were hurt by its allegations.

The book hits a raw nerve because Poles believe they acted honorably during the brutal German occupation. Six million Polish citizens — half of them Jews — were killed during the war, and the Polish Underground performed courageously, including during the 1944 Warsaw Uprising. And Poland has had more citizens honored as Righteous Gentiles at Yad Vashem than any other European country. This is part of the Polish identity.

“Poles regard themselves as innocent victims of history and find it difficult to concede they may be something else,” Gebert said.

The chief rabbi of Poland, Michael Schudrich, gave this assessment: “There is no way to justify what happened, but the people who were going into the graves were very hungry. We have to think of what the times were then. It was starvation. Did they do this because the victims were Jewish, or did they do it because they thought they could find something to feed their families?”

An English edition of the book is scheduled for publication in August.

In New Book, Grave Robbing and Other Stories of Poles’ Complicity