Funding Runs Out for Ethiopians 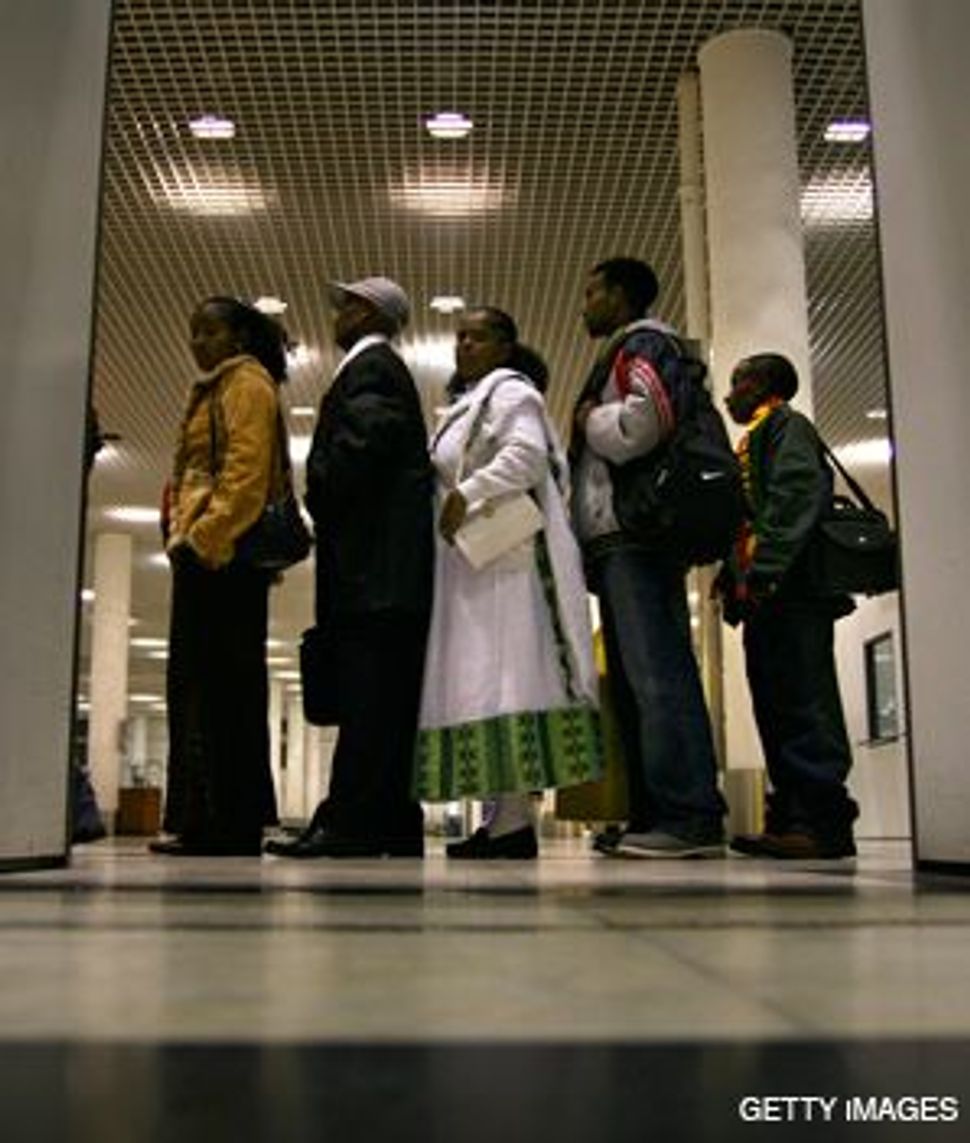 END OF THE LINE: Falash Mura wait to board a plane to Israel from Ethiopia, where aid for those still hoping to emigrate is running out.

Funding is running out for one of the signature issues of the Jewish community, as the coffers that feed thousands of Ethiopians hoping to immigrate to Israel are nearly empty. 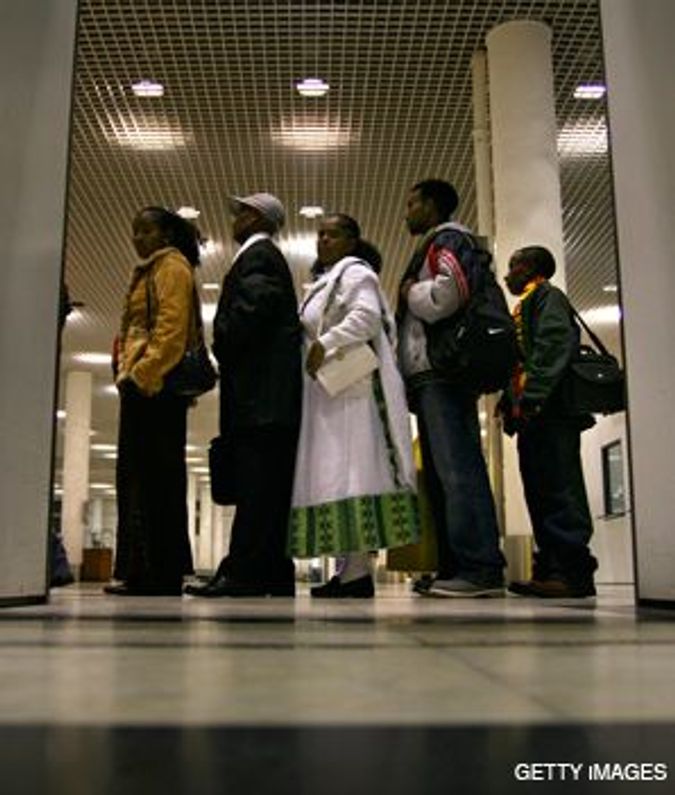 END OF THE LINE: Falash Mura wait to board a plane to Israel from Ethiopia, where aid for those still hoping to emigrate is running out.

Early this month, United Jewish Communities, the umbrella organization for North American federations, revealed that it had run out of funds to provide food aid to Ethiopians who are waiting for a chance to move to Israel. Though a grant from the New York federation is currently allowing the aid to continue, funding is expected to run out by the end of the month.

The news comes as the remaining few Ethiopians who have been deemed eligible by the Israeli government – based on being of Jewish heritage through their mother’s side and having Jewish family in Israel – are being transported to Israel. Once they have made the journey, the government says, they will be the last. Though UJC says that its own exhaustion of funds is unrelated to the end of the immigration push, the combination throws into relief the doubtful future of several thousand who remain behind. If the government’s current position holds, and funding does not resume on a large scale, it could signal the end of large-scale efforts on behalf of Ethiopians of Jewish descent.

“The government, I’m told, is actively looking at additional [immigrants],” said Steve Hoffman, who is president of the Jewish Community Federation of Cleveland and has long been involved with immigration from Ethiopia. “If the decision is to end now, then I think, at least for us, it’s over.”

The Ethiopians in question are known as Falash Mura, Ethiopians who claim Jewish descent, and thus a right to immigrate to Israel, despite the fact that their ancestors have converted to Christianity. Though the claims of the Falash Mura have been contested, the Israeli government has helped tens of thousands to make aliyah.

The plight of Ethiopian Jewry has been a signature cause for American Jewry for some 30 years, with the massive 1991 airlift of some 15,000 Jews to Israel serving as a communal landmark for many Jewish activists. That airlift was thought to be the end of large scale Ethiopian immigration. But the subsequent appearance of the Falash Mura, claiming their own right to move to Israel, has kept the immigration process going. Over the past decade and a half, the Israeli government has repeatedly stated that it has finished transporting all eligible Ethiopians, but it has repeatedly relented under political pressure both domestically and from abroad. In total, some 47,000 Ethiopians of uncontested Jewish descent have immigrated to Israel, along with about 37,000 Falash Mura, according to figures compiled by the Jewish Agency.

Even now, it is by no means clear that the immigration is finished. Activists claim that more than 8,000 Falash Mura in Ethiopia are eligible under the criteria approved by the Israeli Cabinet in 2003 but have not had their claims examined. According to Joe Feit, an American attorney and longtime advocate of the Falash Mura, several efforts related to the disputed Falash Mura are currently pending: two bills in the Knesset, discussions in the prime minister’s office and several lawsuits.

In Israel, however, there has been a growing backlash against efforts to bring more Falash Mura into the country, with some complaining that the Falash Mura are becoming an American imposition.

UJC had pledged in 2005 to raise $160 million in a supplemental campaign for overseas initiatives, including $100 million for Ethiopian immigration, but the effort quickly ran into problems. The money was supposed to fund a commitment by the Israeli government to speed immigration of the Falash Mura, but the government did not accelerate the process, and donors became disillusioned. Then, in 2006, the Second Lebanon War diverted American fundraising efforts from the overseas campaign toward emergency war relief, and the overseas campaign was largely abandoned, after having raised $71 million, according to UJC officials.

Even so, UJC used the funds to direct $68,000 a month to the North American Conference on Ethiopian Jewry, or Nacoej, which in turn used the money to provide food aid to many of the Falash Mura encamped in the Ethiopian city of Gondar.

Meanwhile, Nacoej has been running into its own financial problems. Feit, a former Nacoej president, said that UJC’s campaign diverted money from Nacoej’s own fundraising efforts, and Nacoej executive director Barbara Ribakove Gordon said that the troubled American economy has led to a further decline in contributions. Even so, the advocates have vowed to press on with their efforts.

“Over 26 years of going back and forth to Ethiopia and Israel, I’ve learned never to give up,” Gordon said.

Funding Runs Out for Ethiopians