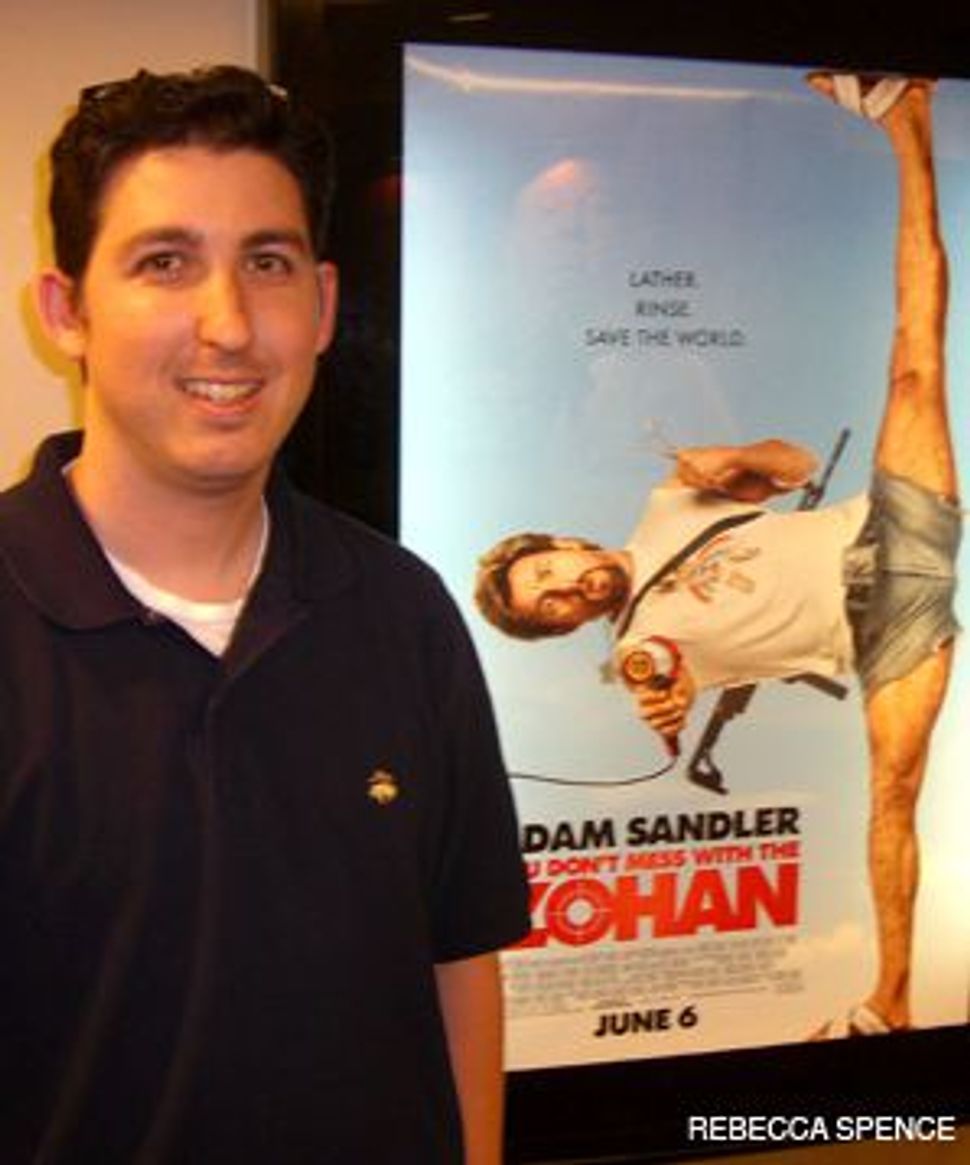 SMILE AND A HAIRCUT: Audiences were more than happy to give Adam Sandler their two bits.

Los Angeles – In honor of his 13th birthday, Jake Himelfarb found a distinctly Jewish way to celebrate: He took his two best friends to see the new Adam Sandler comedy, “You Don’t Mess With the Zohan,” when it opened on June 6. 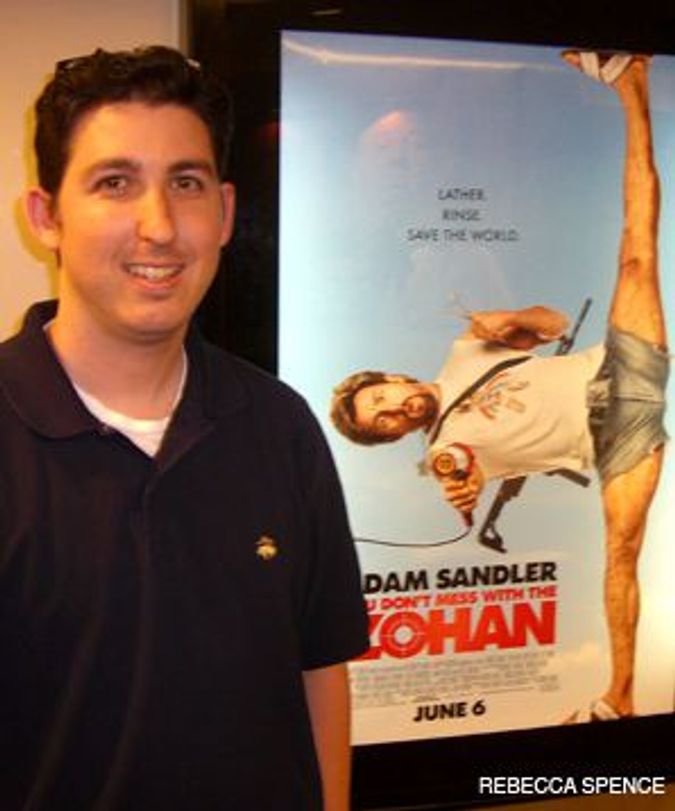 SMILE AND A HAIRCUT: Audiences were more than happy to give Adam Sandler their two bits.

Himelfarb, a Los Angeles native, wasn’t the only Jewish teenager — let alone American teenager — to see the movie during its opening weekend. The Sony Pictures release grossed nearly $40 million in its opening weekend, coming in second only to “Kung Fu Panda.” The film was co-written and produced by its star, Sandler, who plays an Israeli commando who moves to New York to pursue his dream of becoming a hair stylist.

For the Jewish viewer, the film has a special appeal, with its iconic Jewish star tackling the subject of the Israeli-Palestinian conflict. Indeed, according to the senior vice president of media relations at the Columbia TriStar Motion Picture Group, Steve Elzer, the grosses for “Zohan” were “particularly strong” in Los Angeles, New York and South Florida, regions with heavily concentrated Jewish populations.

In Metuchen, N.J., Benjamin Rosenfield, a 15-year-old member of the Conservative movement’s United Synagogue Youth group, rushed to see “Zohan” on opening night. Rosenfield said that while he likes Sandler, it was really the Israeli subject matter that drew him in. “When I first saw the trailer, it looked pretty funny,” Rosenfield said. “But when I saw that he was an Israeli commando, it made it pop a little bit more. Because he’s representing an Israeli, there was no doubt I was going to see it.”

Sandler is certainly a drawing point for the young Jewish male demographic. The actor, who is known for his lowbrow humor, was rated in 2001 as the second most popular Jewish male celebrity, after Jerry Seinfeld, in a poll of Jewish graduate students. But another factor may explain why “Zohan” has been so appealing to the under-30 Jewish set: It represents the first time that an Israeli — and the attendant Israeli-Palestinian conflict — has been given a comic turn in Hollywood.

“This represents some kind of new representation in the diasporic cultural imagination,” said Josh Kun, associate professor at the University of Southern California’s Annenberg School for Communication, referring to “Zohan.”

Kun noted that the film’s humor — which satirizes aspects of Israeli life, including the near ubiquity of hummus and the sexual proclivities of the stereotypical gun-slinging Israeli male — is also a departure from what he views as a lionization of Israel in the American film industry.

“It’s a really interesting time for a studio film to come out written by Jews in Hollywood that is not pro-Israel in any of the conventional ways,” Kun said. “Zohan” was co-written by Sandler; his former roommate Judd Apatow, of “Knocked Up” fame, and Robert Smigel, a “Saturday Night Live” alumnus.

The opening sequence of “Zohan,” in which Sandler’s virile character with a penchant for disco dancing is shown gyrating on the Tel Aviv beachfront with a bevy of gorgeous, bikini-clad Israeli women, is certainly not the typical portrayal of Israelis in American cinema.

American Jews, weary of heavy portrayals of Israelis — think “Munich,” which dramatizes the 1972 massacre of Israeli Olympic athletes — seem to be responding in droves to the more light-hearted depiction of denizens of the Jewish state.

Yuri Kapulkin, a 22-year-old member of the Jewish fraternity Alpha Epsilon Pi who saw “Zohan” on opening night, said that he was eager to see it specifically because of its fresh look at Israel. “It’s a different spin on Israel, and I really liked the idea of making a comedy about the whole Israeli-Palestinian conflict,” said Kapulkin, who is set to graduate from California Polytech State University in San Luis Obispo. “I’m really proud that it’s at the point where you can make fun of the whole conflict.”

Even 15-year-old Jesse Szteinbaum, who went with Rosenfield to see “Zohan” in Metuchen, pointed to the satirizing of the conflict as the primary reason he looked forward to seeing the film. Szteinbaum, like many American teenagers, is a Sandler fan, but the subject — not one that 15-year-olds generally concern themselves with — spoke to him more than anything. “It interests me that Adam Sandler would do a movie that involves a conflict between Israelis and Palestinians,” he said, adding that he’d visited Israel two years ago with his family.

According to Paul Buhle, editor of the three-volume series “Jews and American Popular Culture,” the crowds are indeed on to something.

“My impression is that every time an Israeli shows up, everything gets serious suddenly,” Buhle said. For the first time, he said, a big-budget American film allows people to “think of Israelis as more like ordinary human beings.”

At a recent showing of “Zohan” on Los Angeles’s heavily Jewish Westside, the audience was peppered with Israelis and American Jews. At least one “Zohan” viewer who has spent a great deal of time in Israel, 27-year-old lawyer Yoni Cohen, said it was the first time that he’d seen a lighthearted depiction of an Israeli in a Hollywood film. But he worried that the humor of the movie — the preponderance of hummus jokes, the smattering of Hebrew phrases — might not be understood by Americans who don’t know the idiosyncrasies of the Jewish state.

“A lot of the comedy is probably lost on the crowd,” he said.