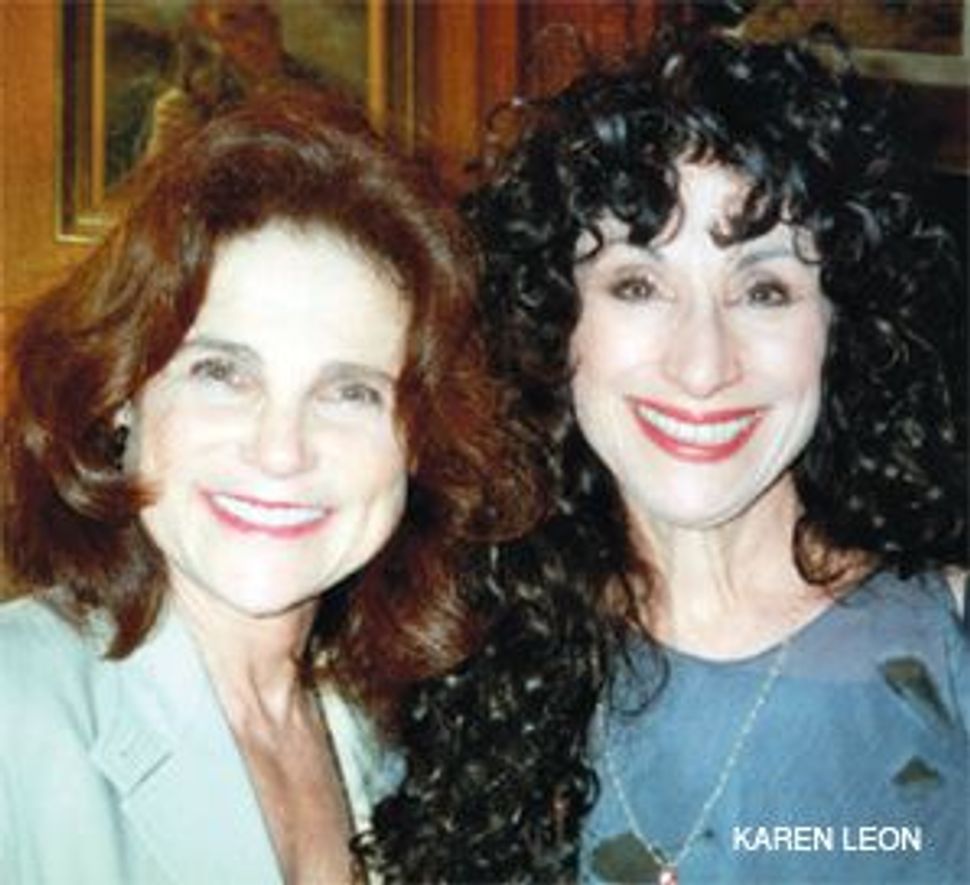 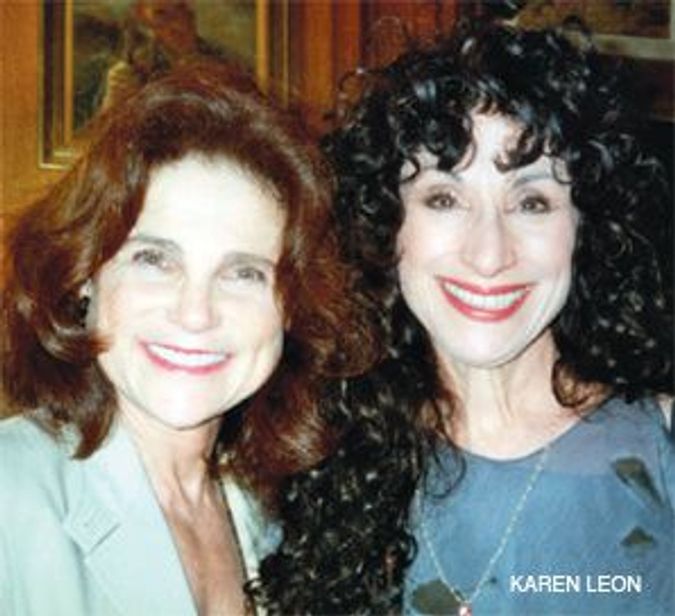 Among the attendees at the recent “Evening With Ackerman” — featuring Diane Ackerman, author of “The Zookeeper’s Wife: A War Story” (W.W. Norton, 2007), and held at New York’s Kosciuszko Foundation — were several Polish diplomats. The event can best be described as a Polish-Jewish historic love-fest. Ackerman exquisitely chronicles how Warsaw zookeepers Jan and Antonina Zabinski saved 300 Jews during the Nazi occupation by hiding them in the zoo’s animal cages. Sponsored by the Museum of the History of Polish Jews/North American Council, the participants included Sigmund Rolat, chairman of MHPJ/NAC; Poland’s consul general ,Krzystof Kasprzyk; Minister of Culture and National Heritage of Poland Bogdan Zdrojewski; Polish Cultural Institute of New York’s director ,Monika Fabijanska; event emcee and MHPJ/NAC treasurer Michael Berkowicz, and Tovah Feldshuh, who presented a fragment from “Irena’s Vow,” her one-woman portrayal of 18-year-old Polish Catholic nursing student Irena Gut. After being beaten and raped by nine Russian soldiers, Gut risked her life to hide 13 Jews in the home of the highest-ranking Nazi officer in Tarnopol, Poland.

Ackerman, who has two sets of grandparents from Poland, described the long-convoluted journey of the book and how zookeeper “Antonina’s story slipped between the cracks of history… Antonina gave the Jews [she saved] names of the animals they replaced.… She would say: ‘The lions are hungry. No one ever feeds the opossums.’ Animals were given human names.… Of 300 [hidden Jews], all but two survived, the two died of illness… Nazism hungered for [its] own mythology… prehistoric replacement of Jewish slaves, [the eradication] of Poland’s genetic history, a botanical change in the world’s DNA.” Ackerman’s description of how Antonina got the slops intended for the pigs into the ghetto for soup and how she poisoned the pigs intended to be processed for German canteens proved a welcome upbeat moment.

Ackerman’s sensory detailing of the scent of the city’s lilac, linden and evergreen trees reactivated my childhood memories of pre-1939 Warsaw. It is in part her graphic description of prewar Warsaw in the book that the Museum of the History of Polish Jews hopes to transmit: “Beyond [Warsaw’s] Old Town lay the large Jewish Quarter, full of mazy streets, women wearing wigs and men sideburn curls… a mix of dialects and aromas, tiny shops… iron balconies painted black or moss green… one above the other, like opera boxes filled… with tomato pots and flowers. One could find a special kind of pirogi, large chewy kreplach: fist-sized dumplings filed with seasoned stew meat and onions before being boiled, baked then [glazed, toughening them like bagels].… The heartbeat of Eastern Jewish culture, the quarter offered Jewish theater and film, newspapers and magazines, artist and publishing houses, political movements, sports and literary clubs… In a city of 1.3 million people, a third were Jewish.” Citing the legend of why Jews settled in Poland 1,000 years ago — because the country’s name sounded like the Hebrew imperative po-lin (“rest here”) — she informed,” Some 12th-century Polish coins bear Hebrew inscriptions.”

“It will be a museum of life, not death,” declared Kasprzyk, who recalled the presence of Shimon Peres and Poland’s president, **Lech Kaczynski, this year at the 65th anniversary of the Warsaw Ghetto Uprising. Rolat said: “The museum [due to open in 2010 on the site of the Warsaw Ghetto] will be an [exemplar] of 1,000 years of [Polish-Jewish] co-existence. It will show my children and grandchildren and the future children of Poland what Jewish life in Poland had been like. Jews will walk out proud to be Jews.” Rolat noted how remarkable it is that “at Yad Vashem, Poland has the highest number of Righteous Among the Nations of all countries,” and amplified, “In Denmark, if a Jew was found in a Dane’s house, nothing would have happened to the family; the man might be sent to jail, whereas in Poland [the entire family] would have been shot.”

Among the guests that evening was Krzysztof Jaraczewski, grandson of Poland’s Vilna-born rogue statesman, Josef Pilsudski, whose roster of credentials includes socialist, soldier and patriotic firebrand. In his chronicle “God’s Playground, a History of Poland. Volume II, 1795 to the Present,” Norman Davies writes: “In 1918-21, he played a part in Polish history which no one can fairly deny. Like that of Churchill twenty years later, his ‘Finest Hour’ stood in the midst of a lifetime strewn with blunders and failures.” When Pilsudski died in 1935, Poland’s Jews felt bereft and abandoned. In Mira Jedwabnik van Doren’s superb documentary and tribute to Vilna, “The World Was Ours,” an extended archival clip shows Pilsudski’s state funeral with rows of nuns bracketing the black-covered cortege that contained not Pilsudski’s body, but his heart! (Jaraczewski is an architect and member of the Pilsudski Family Foundation.)

Adding cachet to the evening was Israeli pianist Nimrod David Pfeffer’s superb interpretations of Frederic Chopin’s compositions: Ballade no 1 in G minor op 23; Nocturnes Opus 9 nos. 1 & 2 ; Polonaise Op. 53 in A flat major; “Heroic,” and Ballade No 4 in F minor Op 52. Pfeffer’s bio notes that his performance venues include Warsaw’s Royal Lazienki Park (a smaller replica of France’s Versailles palace). My mother used to take me to Lazienki Park, where I fed the white swans in its lake. Anticipating puzzled stares from Polish mothers and nannies in the park, my mother — whose hair was dark and wavy, whereas I had blue eyes and straight blond hair — would volunteer that she was my Italian niania (nanny).

The May 19 Commemorative Symposium and Concert at the Center for Jewish History, in memory of Joseph “Yosl” Mlotek’s passing in 2000 (at 81), was enriched with Yiddish songs performed by Robert Abelson, Phyllis Berk, Adrienne Cooper, Mina Bern and (son) Zalmen Mlotek (artistic director of the National Yiddish Theatre-Folksbiene). Recipient of the Mlotek Memorial Prize for Yiddish and Yiddish Culture, New York University professor Barbara Kirshenblatt-Gimblett paid tribute to Yosl and Chane Mlotek’s masterwork, “Pearls of Yiddish Poetry,” calling the compendium a “bridge across a chasm.” Theodore Bikel, the evening’s second Mlotek Prize recipient, proclaimed that Mlotek’s “monument is a Yiddish song… I do not treat Yiddish song as a relic. To me, language is a living, breathing expression of who we are, not who we were. For years it was not safe to be a Jew in Poland. Now, Poles read, speak, sing in Yiddish. There is even an I.B. Singer University!”

Mlotek’s younger son, Mark “Moish” Mlotek (a past Workmen’s Circle/Arbeter Ring president and member of its national executive board), touted his father’s multi-tiered laurels. In English translation he was referred to as “der adres far Yiddish, ‘The address for Yiddish’; Vegvayzer ‘Spiritual Leader’; Lerer ‘Teacher’; khaver ‘Friend.’” One of eight children of a poor blind melamed, Yosl Mlotek lived with his family lived in a one-room apartment in Warsaw. Physically and spiritually “saved” by the Medem Sanatorium (for tubercular children) outside of Warsaw, he eventually became a leader there, ran the camp’s newspaper and became involved in SKIF, A Jewish children’s Socialist network.

Yosl Mlotek’s role in Yiddish education and culture can’t be overstated. He wrote books to teach Yiddish, compiled poetry, and edited newspapers and magazines, including the Forward. He had a weekly radio show, was the voice of the weekly “Forward Hour” and helped produce the mass audiences who now throng to the concerts directed by Zalmen Mlotek. He was lauded not only as the beloved husband of his life-long collaborator and wife, Chana, but also as the father of Zalmen and Moishe, and as the grandfather of Avram, Elisha, Sarah, Marissa and Lee — all of whom speak, sing and probably dream in Yiddish.

It is not possible for me to complete my own historic map without Yosl Mlotek landmarks. On my fifth birthday, while I still lived in Warsaw, my parents gave me a choice of my birthday present — a box of chocolates or a bound volume of “Kinderfraynd” (children’s friend), which Yosl Mlotek edited. With his shock of white-blond hair and blue eyes, and dressed in his SKIF regalia — a deep-blue shirt, red tie, knee-high socks — he looked like an Aryan poster boy. All the girls had a crush on him. Recipient of a Sugihara visa (as were my mother and I), we traveled with Mlotek on the same Trans-Siberian train to Vladivostok, landing in Kobe, Japan. Mlotek, my mother and I drank to the return of the tsar in the house where we roomed, whose owner had been one of the tsar’s generals. Though my mother and I left on the last ship from Japan to Canada before Pearl Harbor, Mlotek spent the war years in Shanghai. I did not meet him again until 1949, when he arrived at Workmen’s Circle Camp, Kinder Ring. As a teenager in 1949 working after school at the YIVO Institute for Jewish Research at its then headquarters on 123rd Street, my “boss” was Chane Gordon, secretary to YIVO founder Max Weinreich. I remember when she returned, all aglow, from a Yiddish conference in Los Angeles at which she had met her basherter, Yosl Mlotek. The rest is dynastic Yiddish cultural history.

After this past Sunday’s performance of the New York Gilbert & Sullivan Players’ delightful interpretation of “The Pirates of Penzance” at New York City Center, I was invited backstage by NYGASP’s founder and director, Albert Bergeret, to meet some of the cast members. He informed me that Ashley Adler (a NYGASP regular who plays the major general’s ward Kate) had been a cast member of the National Yiddish Theatre-Folksbiene 2006 production “Pirates” — “”*Di Yam Gazlonim *”— Al Grand’s ingenious Yiddish reworking of G&S’s lyrics. Mounted at the JCC in Manhattan, the sold-out Yiddish production was under the baton of Zalmen Mlotek and directed by Allen Lewis Rickman. By popular demand it was brought back in spring of 2007.

“How did Ashley come to the Folksbiene?” I asked Motl Didner, National Yiddish Theatre-Folksbiene associate artistic director and outreach director. “She came to one of our auditions,” he said. “It was connected with the Milton and Miriam Rosenberg Scholarship Fund, designed to bring young professional performers into Yiddish classes at the Workmen’s Circle. Many went on to perform in the U.S. in ‘Purim in Chelm’ and “Di Kishefmakhern” (‘The Witch’). ” Didner added: “Ashley will be appearing at the June 17 National Yiddish Theatre-Folksbiene Gala at Town Hall, honoring Carl Reiner.”

Getting back to NYGASP — there is still time to catch two productions that contain delicious updates for today’s younger audience members. (No joke — When, in “Pirates,” a picture of Queen Victoria was presented to the cast and audience, a teenager behind me asked, “Did she start ‘Victoria’s Secret’”?) On June 14 you can catch “The Mikado”; on June 15, “The Gondoliers.” And Al Grand tells me he is working on a Yiddish version of yet another G&S gem. Stay tuned.