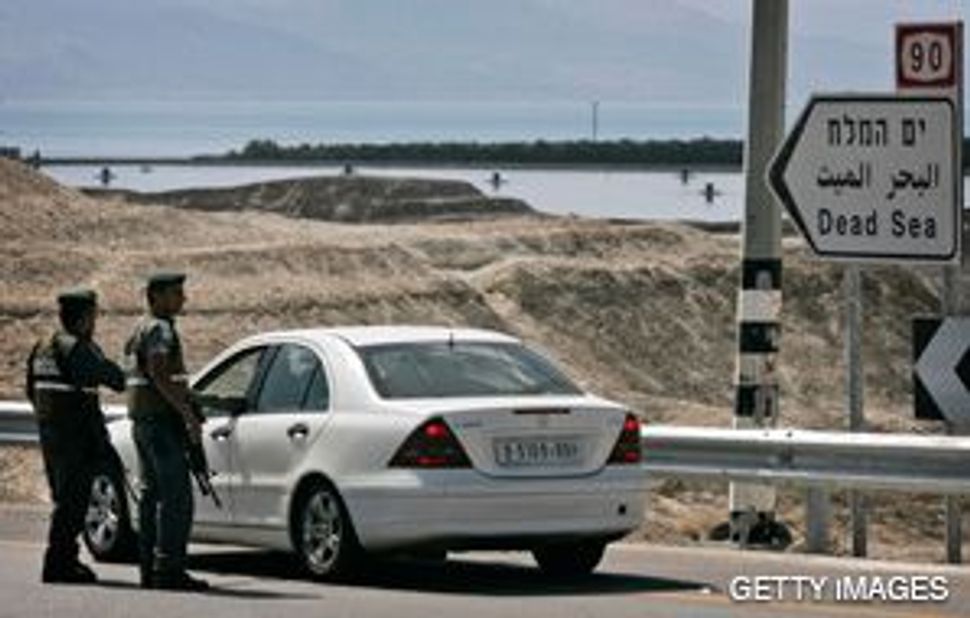 NO VACATION: A Palestinian car is turned back before reaching the Dead Sea. The closures are prompting questions about security and business interests.

Haifa, Israel — For all their bitter disputes, there is at least one matter on which Israelis and Palestinians are in full accord: With a sweltering summer now under way, the time has come to indulge in a beach trip. But even this seemingly uncontroversial pleasure has been dragged into the Middle East conflict. 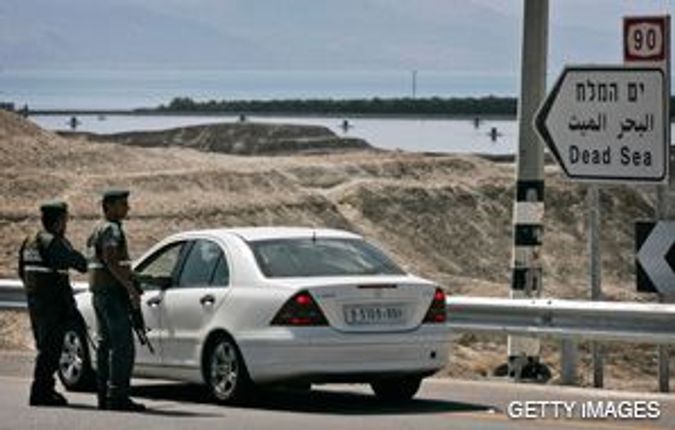 NO VACATION: A Palestinian car is turned back before reaching the Dead Sea. The closures are prompting questions about security and business interests.

In a petition submitted to Israel’s Supreme Court last week, civil rights advocates charge that Palestinians are being kept away from the shoreline because Israelis find their presence off-putting.

While a large section of the Dead Sea is within Israel’s internationally recognized, pre-1967 borders, much of the northern section is in the West Bank. As such, it is a traditional destination for Palestinians — and one of the few hangouts that they have tended to share with local Jewish settlers.

A little more than a year ago, however, the Israeli military began operating a roadblock along the route on weekends, holidays and some weekdays, resulting in many Palestinians being turned away.

“Soldiers got on the bus and told us we could not continue and had to turn back,” said bus driver Mohammed Noada, who was hired to take a group of Palestinian schoolchildren to the sea last month. “The children started begging them to spend just 10 minutes on the beach, but nothing helped.”

While the roadblock has been angering Palestinians since its inception, no hard evidence has been brought forward to indicate any motives for its erection other than security. Last week, however, one of Israel’s best-known civil rights groups filed a petition with the High Court, claiming that the roadblock was erected because the presence on beaches of Palestinian bathers discourages Israeli tourism and hits business in the pocket.

This petitioning group, the Jerusalem-based Association for Civil Rights in Israel, believes that the roadblock is “illegal, immoral and a very serious breach of human rights,” spokeswoman Melanie Takefman told the Forward.

Roadblocks, long seen by many Palestinians as a hated symbol of Israeli occupation, have come under the spotlight with increasing intensity in recent months.

In March, following repeated requests by Secretary of State Condoleezza Rice, Israel promised to remove 61 roadblocks. The Jewish state now claims to have met this target and to have removed an additional 19. Yet last month, a United Nations report put the number of roadblocks at 607, an increase of 7% since last September.

This situation of claim and counterclaim leaves Israel under fire from two sides. International diplomats, Palestinians and left-wing Israelis claim that Israel is increasingly restricting freedom of movement for Palestinians. At the same time, the Israeli right is up in arms over reports of roadblocks being dismantled, and warns that this places Israelis in danger.

Nevertheless, until now the arguments have taken place along well-practiced lines — security vs. freedom of movement. The charge that a roadblock is used to regulate market economics is completely new.

This accusation arises from testimony given to the civil rights association by Doron Kardel and Nahman Falasch, respectively a major and a lieutenant, who were on reserve duty when the roadblock on the Dead Sea road was first set up. The reservists allege that the barrier was established at the request of Israeli businessmen who believed that their tourist-related ventures — including privately operated beaches and kiosks — were suffering because the presence of Palestinians was discouraging Israeli bathers.

In his testimony, which formed part of the High Court petition, Kardel recalled a conversation with Yigal Slovik, the colonel who commands the Jordan Valley Brigade. “It was explained [by him] that the reason we set up this checkpoint was that it was harming the income of Jewish settlements on the Dead Sea beaches when Palestinians would come on vacation and sit next to Jewish visitors — in other words, that ‘mixing’ means less income,” Kardel testified.

He added that the commander informed them that although a security motivation could be cited, the businessmen’s request was the actual background of the roadblock.

The military has been tight-lipped on the matter. Responding to an inquiry by the Forward, an army spokeswoman said: “A detailed response will be filed in the state’s response to the suit. Until then, the [Israel Defense Forces], as one of the defendants, cannot comment further on the specifics of the case.”

The civil rights association remains firm in its opposition. “We condemn the current sweeping restrictions on Palestinian freedom, and especially this case, which has nothing to do with security but which is motivated by economics,” Takefman said. She added that the Dead Sea roadblock was particularly questionable because “Palestinians are so restricted regarding their movement into Israel, but this case is within the territories.”

Professor Efraim Inbar, director of Bar-Ilan University’s Begin-Sadat Center for Strategic Studies, said he “doubted” the truth of the civil rights association’s claims. “The IDF generally acts with concern for security,” he said.