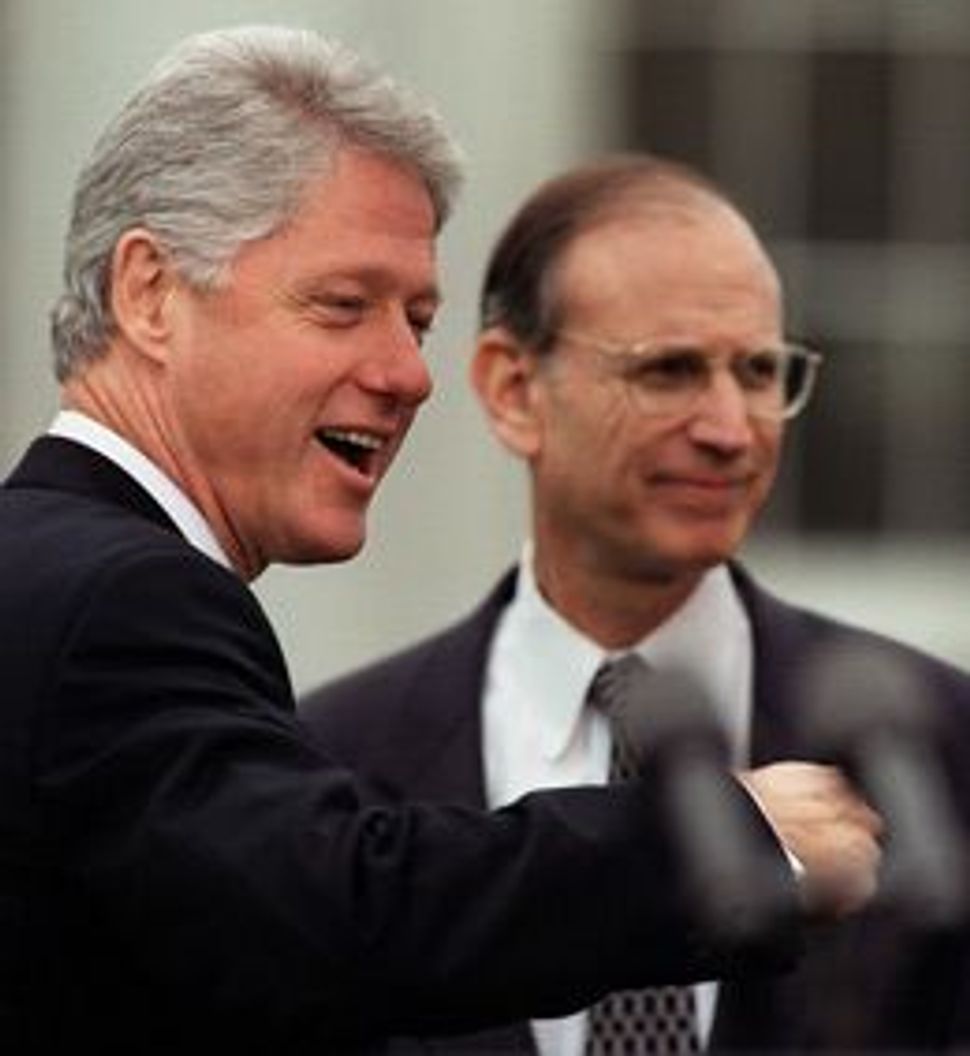 Victory: In 1999, Bill Clinton (left) announces the establishment of a $5 billion fund set up by the German government and German industry to compensate Holocaust survivors and their fami- lies. The chief negotiator, U.S. Deputy Treasury Secretary Stuart Eizenstat, looks on. Image by GETTY IMAGES

That’s the pitch for a new film in development by Sony Pictures that may star Oscar-winning actress Sandra Bullock. As improbable as it sounds, the movie will tell a suspenseful story about insurance companies and the Holocaust, an epic battle that led to one of the largest programs of Holocaust restitution. 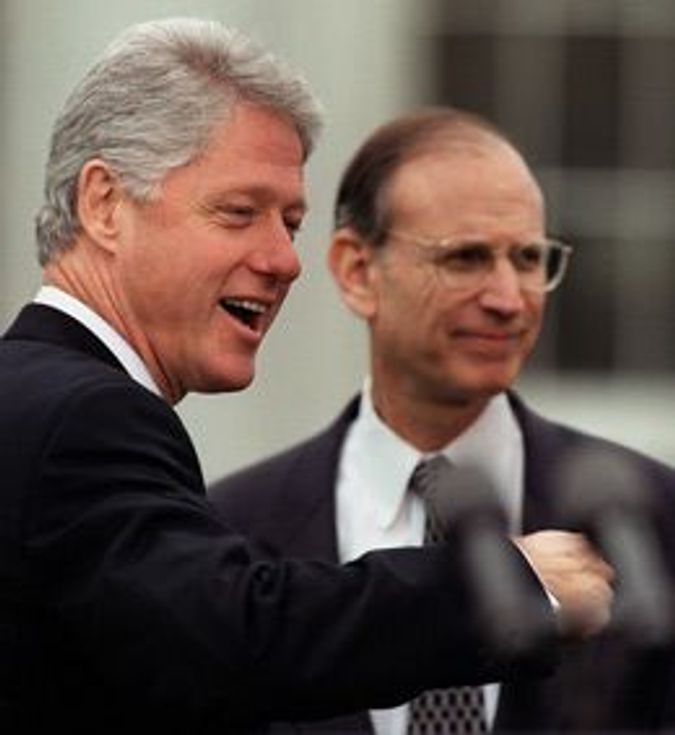 Victory: In 1999, Bill Clinton (left) announces the establishment of a $5 billion fund set up by the German government and German industry to compensate Holocaust survivors and their fami- lies. The chief negotiator, U.S. Deputy Treasury Secretary Stuart Eizenstat, looks on. Image by GETTY IMAGES

But this is Hollywood, after all, a town with a well-earned reputation for not letting reality get in the way of a good story. This new attempt to cash in on a Holocaust tale is no exception.

At the story’s center are the heirs of a wealthy Hungarian wine merchant, Mor Stern, who was murdered at Auschwitz. His grandchildren forced a major European insurance company, Generali, to compensate them for his pre-war insurance policy, which the company had long refused to admit even existed. The case was unprecedented and opened the floodgates to multi-billion dollar compensation funds set up for Holocaust survivors and their families by European governments and businesses in the late 1990s.

There’s only one problem. Members of the Stern family are now at war with each other as a result of the proposed film. Martin Stern, one of Mor Stern’s grandsons, claims that the project completely erases his critical role in the story.

“I don’t understand how someone can sell a story that is just fiction,” said Martin Stern, who lives in London and Jerusalem — but never in Hollywood.

As presented in a film treatment found on the Internet and confirmed as authentic to the Forward by co-writer Robby Kushner, the Sterns’ victory against Generali was entirely the result of a lonely crusade by Lisa Stern, Martin’s sister-in-law, and William Shernoff, the Beverley Hills-based attorney who helped her sue the insurance company. The film to be based on the treatment is itself based on a 2006 documentary that was funded by Shernoff’s family foundation. In 2008, Sony subsidiary Screen Gems optioned the documentary to create a feature film, reportedly to be titled, “Never Forget.” Serious buzz started last September, when a number of Hollywood trade magazines reported that Sandra Bullock had been offered the role of Lisa Stern.

But Martin Stern, 62, the director of a real estate company, looks askance at the idea that his sister-in-law had anything to do with initiating the crusade to get Generali to come clean. He does not talk to his brother or his sister-in-law anymore. And he has brought ethics charges against Shernoff before the state bar of California. He acknowledges Lisa Stern played a role later in the battle. But as Martin Stern tells it, the only thing that motivated his sister-in-law and Shernoff to pursue the case was “greed.”

Michael Berenbaum, who was project director for the creation of the United States Holocaust Museum and has no direct knowledge of the Stern case, said that whenever money has entered the picture in a Holocaust-related matter, it never ends well.

“I’ve found that everyone who has touched money has been diminished by it,” Berenbaum said. “I’ve seen families ripped apart.”

The truth of how the Sterns first became involved, at least as recounted in non-fiction historical accounts of the restitution battle, such as John Authers and Richard Wolfe’s 2002 book, “The Victim’s Fortune,” appears to lie somewhere in between the various versions.

Both Lisa and Martin Stern acknowledge that it all started at the 1996 funeral of one of Mor Stern’s sons. There, the family began discussing their recollections of a lost Generali insurance policy that Mor had taken out before World War II. Adolf, another of Mor’s surviving sons, told the story of trying to collect on the policy in the days following his liberation from Buchenwald. He was kicked out of Generali’s office in Prague and told that without proof of a policy or at least a death certificate for his father, they could not help him. The Nazis, of course, didn’t issue death certificates at Auschwitz. But for Generali, the Holocaust was no excuse for exceptions.

The family decided at the funeral to press Generali to acknowledge them, especially in light of a recent news report that Generali was in talks to buy Israel’s biggest insurance company, Migdal.

Lisa Stern was not at this funeral, according to her brother-in-law and another family member. Lisa Stern, who is herself an attorney, did not respond to the Forward’s requests for an interview. She did, however, present her account of how she came to the case in a February 2010 talk at Pepperdine University now posted on the Internet. In that talk, she describes being present when the initial conversation took place.

In the film treatment, it is at the point of this funeral conversation that Lisa takes up the gauntlet and starts to pursue the idea of suing Generali.

But in “The Victim’s Fortune” and according to Martin Stern’s account, a year and a half passed before Lisa Stern and Shernoff filed suit against Generali. During this time, Martin said, he was alone in pursuing the claim.

It was Martin Stern who got in touch with Generali following the funeral, the book reports. When the firm dug in its heels, he began a campaign in Israel to shame the insurer. As described in “The Victim’s Fortune,” Martin Stern became “the greatest public relations nightmare in the company’s history.”

The book credits him with harassing Generali to such an extent that the insurance company was eventually forced to look for Mor Stern’s insurance policy in its archives in Trieste, Italy — archives the firm had insisted did not exist. Martin Stern also engaged two private detectives to search for the warehouse where they might be stored. In December 1996, the family finally got the documentation it had long sought, when Generali faxed a copy of one of Mor Stern’s policies to Martin’s mother in London. Generali also set up a $12 million fund for survivors in Israel six months later, in June 1997, as a result of Martin Stern’s pressure.

But in the film treatment’s version, it is to Lisa Stern that the policy is faxed. This is followed by a wholly fictional account of her visiting Trieste and sneaking into the warehouse to secure the other documents in Mor Stern’s file. The account Lisa herself gave at Pepperdine was less dramatic. But she nonetheless described the faxed documents as arriving mysteriously in 1996, “like manna from heaven,” the work of an inside whistleblower.

According to “The Victim’s Fortune” and Martin Stern, it was only in January 1998 that Lisa Stern and William Shernoff took over the case. California was holding a hearing on the Holocaust insurance cases that Martin Stern could not attend. He asked his brother, Alan, Lisa’s husband, to read his statement. As Martin Stern recounts it, the next thing he knew, Lisa Stern and Shernoff announced that they were suing Generali for $135 million.

Once it became their case, there is no doubt that Shernoff and Lisa Stern pushed it forward. Lisa Stern helped remove one of the biggest obstacles to suing Generali when she convinced the state legislature to pass a law that gave California courts jurisdiction over her case. Other states soon adopted similar laws.

Robby Kushner, the young filmmaker who was hired by Shernoff to direct the documentary about the case in 2003, said his research all pointed to Lisa Stern and Shernoff as being the important figures in the restitution story. In the film treatment that he wrote for the feature film, the $5 billion fund set up by the German government in 1999 to offer compensation to survivors was a direct result of Stern and Shernoff’s efforts, a way of preempting a cascade of future suits.

“From my research, Martin Stern isn’t very prominent in the story,” Kushner said.

Kushner also said that while Martin Stern tried to block his work on the documentary – including convincing Generali to renege on an interview – Lisa Stern was always helpful.

“I was just trying to make a film,” Kushner said. “When I look back, Martin was so hard to work with, and Lisa is out here in Los Angeles with me and is the nicest person in the world. She helped provide me with the answers I needed to move the story forward.”

Shernoff told the Forward that he doesn’t think Martin Stern’s role in the story was ever diminished.

“What he is saying is correct as far as starting the ball rolling,” said Shernoff. “And if you’ve seen the documentary and heard Lisa or me talk about it, we always give him that credit.”

Shernoff also said that he has seen a version of Sony’s proposed script for the film that is more recent than the treatment available on the Internet. In it, he said, the story begins with the litigation Lisa Stern initiated, and not the long earlier campaign by Martin Stern to force Generali to open its files. This would conveniently leave out Martin Stern’s part in the story. The film, Shernoff also added, will be “totally fictionalized. It’s what Hollywood does.”

Shernoff refused to say how much Sony paid to option the documentary, but Martin Stern’s lawyer said that Shernoff told him in a conversation that Shernoff and Lisa Stern had each received $80,000.

The Stern family case against Generali was eventually settled in November 1999 for $1.25 million. Though Martin Stern said he was edged out of the litigation, both sides say he was key in arriving at a settlement agreement after he began to have conversations on his own with Generali executives. The settlement was a landmark, and Lisa Stern and Shernoff went on to settle a handful of other cases against Generali.

“I think in the end Martin was just jealous,” Shernoff said. “He did start this but then it just got larger than life, and it wasn’t his anymore.”

Jeanette Friedman contributed reporting and research to this story.