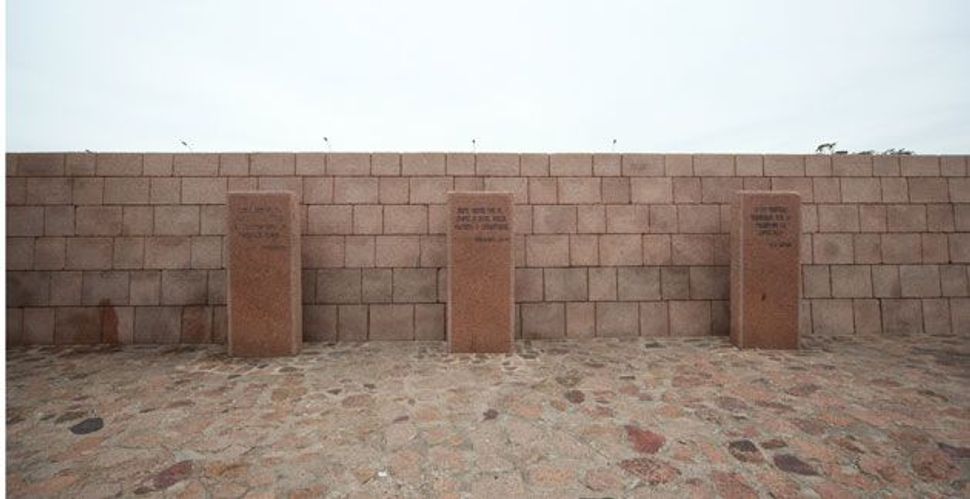 Though Jewish history began as early as 1680 in Uruguay, Montevideo?s Jewish community is new. Above, the local Holocaust memorial that feature quotations from Elie Wiesel, Maimonides and others. Image by MVD Luongo

It’s a beautiful setting for such a poignant memorial: A rail line cuts through the grassy edge of the boulevard, overlooking the gentle waves of the Rio de la Plata, the wide, sealike river on Montevideo’s edge. Nearby, a high granite wall buffers a stone path leading to a chaotic plaza, the surroundings broken in the middle.

“It’s a place of life,” one trying to communicate hope against all odds, my longtime friend Tamara Levinson, a tour guide specializing in Jewish sites, explains of Montevideo’s Holocaust Memorial. She is quick to point out the symbolism: broken walls representing the Holocaust; the Bridge of Doubt, a walkway designed to encourage visitors to contemplate the fate of European Jews; tombstonelike granite slabs with quotes from Elie Wiesel, Maimonides and others. Another stone plaque tells of 15-year-old Ana Balog, Uruguay’s only known Holocaust victim, who died in Auschwitz in 1945 after returning to Hungary with her family.

The Holocaust Memorial is just one of the sites that Levinson ([email protected]) brings me to in Montevideo. It’s a route on which she often takes American Jews visiting this capital city of Uruguay. She points out that the memorial, dedicated in 1995, is in an honored location. It’s on the waterfront Rambla, across from the golf course near upscale Pocitos, a popular Jewish neighborhood since the 1980s. In years prior, Jews lived in Goes or in the Old City, close to the port.

The tour is a rush of buildings and sites, with a barrage of information along the way. Levinson takes the group to Golda Meir Square, located behind the Teatro Solis opera house at the intersection of Reconquista and Ciudadela streets, to show us a memorial that she says resembles “jigsaw pieces coming together, the Diaspora, coming together. Zionism is the concept of the monument.” There are synagogues, like the Sephardic Beth Israel Temple (234 Buenos Aires Street) in the Old City, which was built in 1954.

Even without her pointing them out to me, I know where the centers of Jewish life are: Each has a concrete barrier protecting it from the street, but Levinson tells me that anti-Semitism is not an issue in Montevideo. She explains, “This was done because of what happened in Buenos Aires,” referring to the 1992 and 1994 bombings in Argentina’s capital across the river.

The low barrier can’t take away the majesty of the Sephardic synagogue. It’s the city’s largest, with about 1,000 members, but Levinson adds, “There’s no real minyan.” It is the same story in most of the city’s 12 synagogues, despite the roughly 20,000 Jews in metro-Montevideo, population 1.5 million.

Though Jewish history began as early as 1680 in Uruguay’s Colonia, a fortress outpost where both conversos and Marranos lived, and where a mikveh was discovered, Montevideo’s Jewish community is new.

Sephardic Jews came from Turkey in 1904, followed by Russian Jews in 1906. Russian Jews, being Ashkenazi, were considered Germans, and so were allowed to bury their dead in the German section of the British Cemetery, until such burials were banned there during World War I. In 1917, Ashkenazim and Sephardim “got together, and the first Jewish project was a cemetery,” Levinson says, referring to the Cementerio Israelita, which is located about 45 minutes from the center of town, in La Paz, in the Canelones Department of Uruguay.

But our tour is not solely buildings and history. In Pocitos, we visit the kosher Armon Suites Hotel (2885, 21 de Septiembre St.; www.armonsuites.com.uy), which is complete with a Sabbath elevator, and proceed to Deli Singer (Scoceria 2607), where the blue-eyed owner, Enrique Singer, is waiting behind the register. Singer, to my surprise, says that his store is open on Saturdays. “Well, we’re not kosher,” he says, laughing. It is then that I notice knishes placed next to ham-and-cheese dough balls.

It’s this blending and assimilation that makes our next stop all the more interesting. Yavne Institute and Community Center (Cavia 2800; www.yavne.edu.uy) is an educational institution and synagogue in Pocitos. Here I meet Marcelo Cynovich and Marcelo Ellenberg, board members who turned what was once a struggling school into one of Montevideo’s most important Jewish centers.

Ellenberg says that in the mid-1960s, Uruguay had about 50,000 Jews, comprising 2.5% of the population, along with a Jewish theater, newspapers, radio station, even a kosher slaughterers’ union. Uruguay’s secular 1903 constitution made the city very different from its Catholic-dominated neighbors. “Jews were very well accepted. It was a very friendly society, welcoming immigrants. Jews in Uruguay moved along with the society,” Ellenberg tells me.

Cynovich says the pull of Zionism was also strong in the 1960s and ’70s. He explains that as a percentage of the Jewish population, Uruguay has the world’s highest rate of aliyah. “The air of being Jewish was, let’s go to Israel,” Cynovich says, draining congregations, leaving little Jewish life by the 1990s for those who remained.

The Yavne Institute turned this around, though, adding a kosher bakery, offering instruction on kosher cooking, opening itself up to youth, even adding a swimming pool. “I don’t care why you come,” Cynovich says, “as long as you come.” Having what he calls a “fun rabbi,” who plays basketball, also helps. “Youth were in search of another context besides Zionism, not only Zionism, adding a context to Zionism,” he explains, meaning that teachings about Judaism and Israel must have a relevance to modern life. More than 2,500 people come to Yavne’s synagogue for the High Holy Days, and up to 400 attend Sabbath services. In 2008, Yavne opened a yeshiva. Currently, 180 students are enrolled.

Ellenberg says: “Opening the yeshiva is the guarantee there will be a future. We are providing the means to lead a Jewish life. Without an education, there is no future. From here, Judaism in Uruguay was rebuilt. The question is, what comes next?”

Michael Luongo is the author of the Frommer’s Buenos Aires guide and many other travel books.