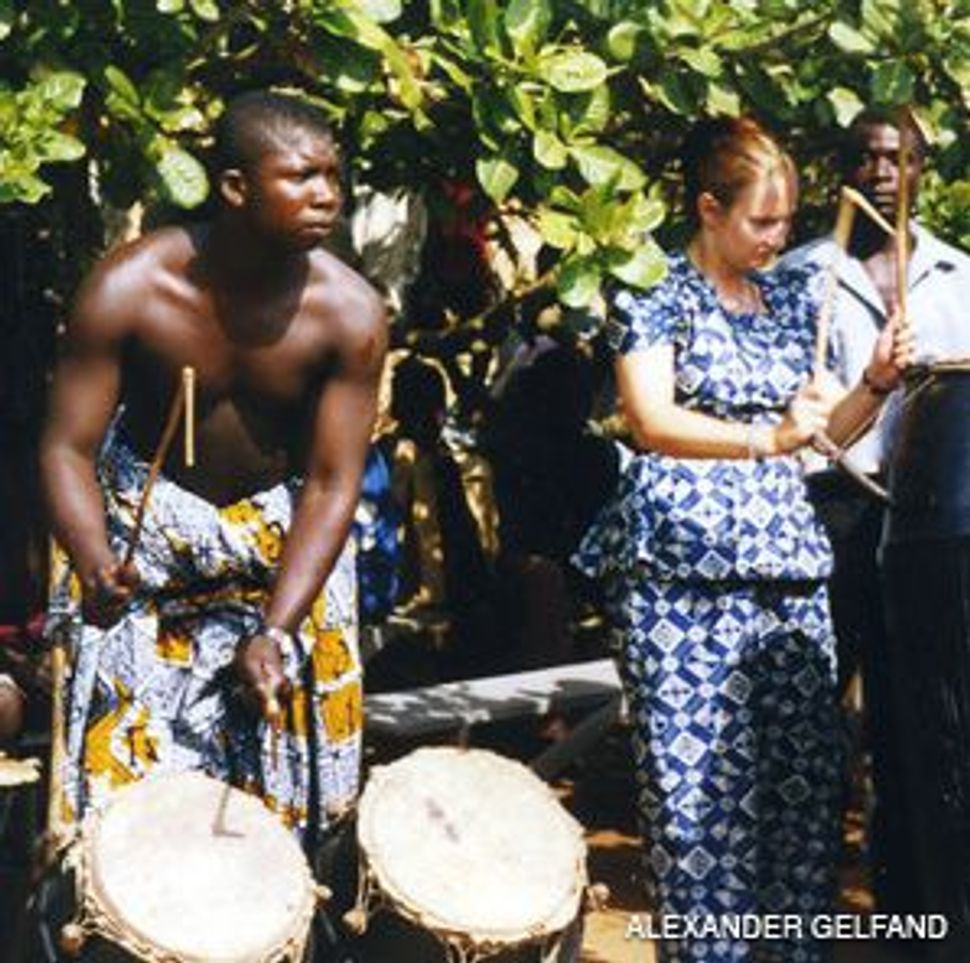 THE BEAT GOES ON: The author?s wife, Ingrid Gordon, drummed in a ritual celebration at the palace of a Ghanaian chief.

Though you’d never guess it by looking at my pale Canadian Jewish face, I was once an African drummer. 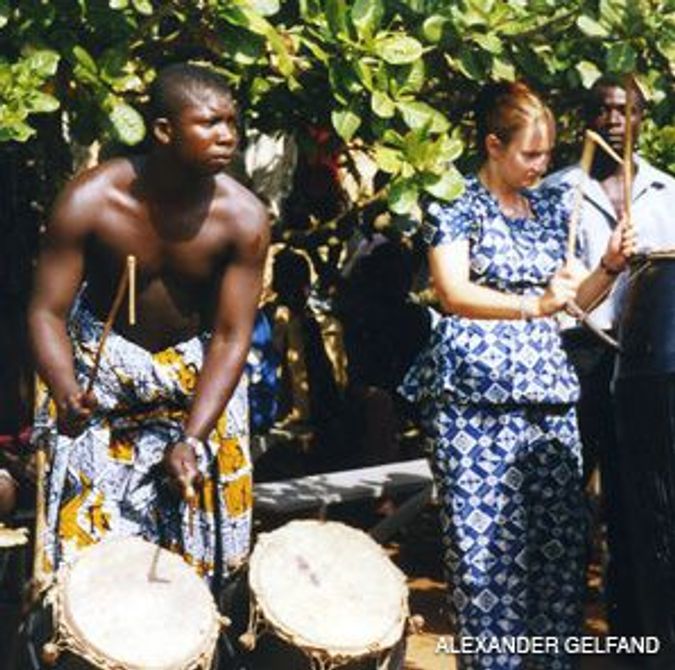 THE BEAT GOES ON: The author?s wife, Ingrid Gordon, drummed in a ritual celebration at the palace of a Ghanaian chief.

My transformation began 15 years ago, when I joined a West African drum ensemble in Toronto. My fellow drummers, all immigrants from Ghana, dressed me in a traditional Ghanaian toga, fed me peanut soup and homemade gin, and taught me to play their royal drums — drums that I beat until my hands blistered and bled all over my faded khakis. In 1997, three weeks after we got married, my wife, Ingrid, and I traveled to southern Ghana to study the music at its source. It was quite a honeymoon.

Our African hosts seemed surprisingly unsurprised that two white foreigners would travel thousands of miles to study their music. Only two things gave them pause: the fact that we were Jewish and that Ingrid was a professional drummer.

Jews have no place in the traditional Ghanaian universe. Christians they know about: There were several churches in the small town where we lived for four months, and most people practiced a blend of Christianity and local religion, which involves ancestor-worship and animal sacrifice. They know about Muslims, too, since the north of the country is heavily Islamic.

The Christian missionaries who erected churches and schools throughout the South did not, however, spend much time discussing the Judeo side of the Judeo-Christian tradition. As a result, most of our new friends had no idea what the word “Jew” meant.

Every Sunday, as we walked into the center of town to have lunch, we would run into a friend or acquaintance who was on the way home from church. The conversation was always the same:

Exchanges like that usually made us laugh. The difficulty that Ingrid faced as a result of her gender, however, wasn’t so funny.

Ingrid and I had been told in advance that we would be able to play in the same royal drum troupe. The leader of the ensemble, a drummer named Kwame whom I had first met in Toronto, coached us both and had us come to all the funerals and religious events at which the troupe was invited to play. (In Ghana, where death marks a person’s transition to ancestorhood, funerals are like bar mitzvahs: joyous celebrations heavy on dancing, drinking and gift-giving.) We would both show up in traditional garb: me in my toga, Ingrid in the elaborately patterned dress that had been made for her by a local seamstress. But while I was always called upon to play, Ingrid never was.

I shouldn’t have been surprised. I knew that there were no female drummers in the region and that certain drums were literally taboo for women — something having to do with menstruation and ritual pollution. But I thought that an exception would be made for Ingrid.

So there she would sit at the back of the ensemble, all dressed up with nothing to do. One day, as I was pounding away at the funeral of a local bigwig, I could tell she was about to snap — this woman who had followed me to a Third World country where she couldn’t speak the local language, was forced to sit through an endless series of gruesome sheep sacrifices and wasn’t allowed to practice her vocation. So I turned around, handed her my sticks, and told her to get up and play.

Actually, I had no idea. What is the worst that can happen when you break an ancient taboo in a country where the locals are rumored to have practiced human sacrifice right up until the early 20th century?

Fortunately, we never found out. Ingrid walked over to the lead drums — massive cylinders carved from tree trunks, with thick cowhide skins — and beat the hell out of them. I could see the shock and awe on the faces of the other drummers. When she was done, there was a moment of complete silence followed by an enormous roar, as a crowd of mourners surged forward to touch her, to hug her, to congratulate her — and to congratulate me for having such a marvelous wife.

From that moment on, I ceased to be the troupe’s mascot — “the White Boy We Taught To Play the Drums” — and became formally known as “the Husband of the White Woman Who Plays the Drums So Well.”

Ingrid, meanwhile, became a full-blown celebrity. The Ghana Broadcasting Corporation filmed her performing at a major religious festival, and the footage was aired across the country. A week later, a stranger stopped Kwame in the streets of Accra, the nation’s capital.

“Aren’t you the guy who taught that white woman to play the drums?” he asked.

I like to imagine that Kwame smiled and said: “Yeah. And she’s Jewish, too.”

Alexander Gelfand is a writer living in New York.