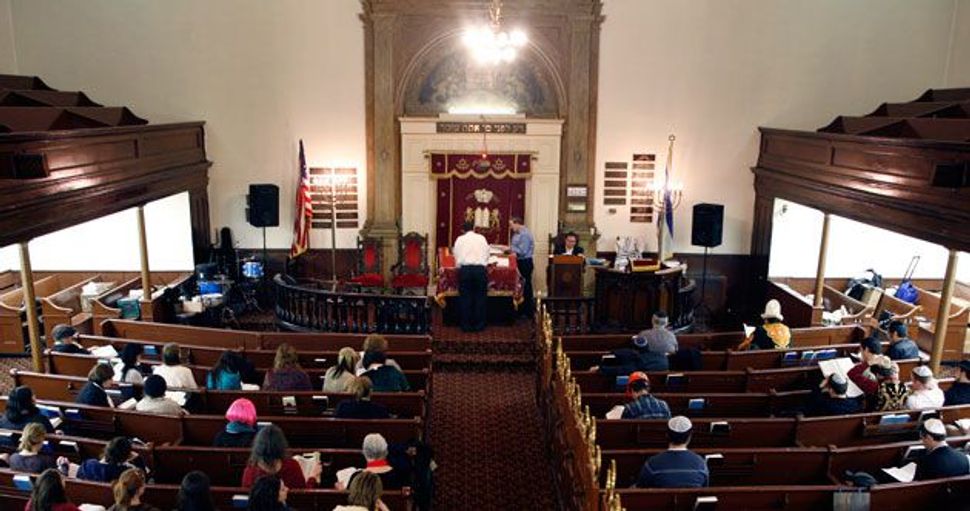 Three years after a Lower East Side match that seemed made in heaven, Manhattan’s historic but struggling Sixth Street Community Synagogue and popular Chabad rabbi Simon Jacobson have divorced amid acrimony to rival that of a bad marriage from an Isaac Bashevis Singer tale.

Jacobson, once seen by members of the synagogue as a potential savior, moved out of the building in February, after a slate of his supporters for the board lost in the first leadership elections held by the synagogue in more than a decade.

The vote was 83–2. But the lopsided result came about only after the synagogue’s rabbi, Greg Wall, announced at the meeting that voting rights were restricted to synagogue members who attended services at least once a month and contributed funds to the shul on a regular basis. This eliminated many new members that had been brought in by Jacobson via means that the congregation’s old guard challenged. Actually, even counting new members, Jacobson’s slate lost, 155–100.

As a result, the old guard, led by Second Avenue Deli owner Jack Lebewohl and synagogue president David Landis, emerged as victors. The question is, now that they have won, what will the financially troubled congregation do to stay afloat?

Landis declined to elaborate on the synagogue’s finances. But he did say that fighting three court cases involving Jacobson or his supporters during their long downward spiral together had taken its toll.

“It was a financial hardship to commit all that money to fight these court cases,” Landis said, “and the effects of that will be felt for a long time.”

At the general election meeting, according to press reports, old and new members cursed each other. One congregant suggested calling the police. And later, Jacobson’s supporters sued the synagogue, claiming that Wall had used “an arbitrary and capricious standard to determine qualified voters.”

“I was very hesitant [to enter the relationship], because I knew working with synagogues is notoriously complicated,” Jacobson said recently, as he prepared to move the last of his possessions out of the Community Synagogue basement. “Synagogues have ancient traditions, and I didn’t want to ruffle feathers.”

It was a sad end to a June-December match, and one not irrelevant to many aging congregations that invite new groups in wholesale with the hope that their fresh blood will revitalize the space, generate new revenue and somehow assure their beloved institution’s future — but without changing it all that much.

The Lower East Side, once home to 325,000 Jews, is a tough marketplace for a synagogue these days. The Community Synagogue, founded in 1940, has struggled for decades. Among its many costs is the upkeep of a mid-19th-century building that originally housed the St. Mark’s Evangelical Lutheran Church. Though Landis said that the synagogue has no problem forming a daily minyan, former chairman Matthew Pace, who sided with Jacobson in the power struggle, said that finances have “been an issue” for some time.

Initially, the partnership the synagogue forged with Jacobson in April 2008, looked ideal. Jacobson’s Meaningful Life Center, which offers well-attended life-skill classes blending Judaism and spirituality, hoped to finally have a permanent home after a peripatetic existence bouncing from synagogue to synagogue. The synagogue would benefit by attracting new members and by taking a 30% cut from MLC’s numerous programs and events. Jacobson even offered to renovate the basement.

But within a year, the relationship had broken down.

Beginning in 2009, MLC advertised a membership package for its Rosh Hashanah and Yom Kippur services on a website. The package cost $325 — the same price as a membership for the Community Synagogue. Buried toward the end of the section on the website that displays frequently asked questions was the fact that, along with access to High Holy Day services and to Jacobson’s MLC classes, people were also buying a membership to the synagogue.

In the fall and winter of 2009, representatives of MLC began paying bulk checks to the synagogue for new members. And that December, Jacobson’s supporters demanded that elections, which had not been held in the synagogue for years, be called to elect a new board.

“That’s when it occurred to me that he was engaging in deception to stack membership and take control of the shul,” Landis said. “Some of the new members lived in Brooklyn, some lived outside the city and a few lived outside the country.

“To recruit 100 members cost him $32,500. In return, he could have gained control of Manhattan real estate worth millions.”

Jacobson terms claims that he sought a takeover of the synagogue “ridiculous.”

“I sensed some people felt threatened by our success,” Jacobson told the Forward, reviewing the relationship’s demise. “Then I started hearing murmurings: Why did we give them the space? Why don’t we do our own programs? Why don’t we get more money?”

The Community Synagogue actually terminated its agreement with Jacobson last May, giving the organization 90 days to move out of the building. In August, Jacobson sued, claiming that the eviction was “the culmination of a history of bad faith.” Among his many demands were damages totaling $500,000. A judge dismissed seven of the eight claims that Jacobson brought against the synagogue; a court hearing on the last claim is scheduled this May. Meanwhile, at the end of last year, the Community Synagogue started proceedings to evict Jacobson. Initially, Jacobson fought the synagogue. But a few weeks ago, he told his lawyers to stop.

Still Jacobson cited neither case as his reason for leaving.

“The lease is up,” Jacobson said. “Obviously, we would have loved to stay on, but they don’t want us, so we are going to leave.”

The costs for the synagogue have been more than just financial. Pace, whose grandparents were among the synagogue’s founders, no longer attends services as regularly as he once did. One e-mail exchange between Pace and Landis last year, submitted as evidence in the court cases, illustrates the level of animosity that grew among synagogue members.

Sent shortly before the contested election, Pace’s e-mail to Landis warned him that he was “playing in the big leagues” and “up against very well advised and funded people” — an apparent reference to Jacobson’s wealthy supporters. Pace urged Landis to seek legal advice.

For his part, Landis believes that Pace sided with Jacobson with good intentions.

“My own theory is that Matthew believed the shul was dying and he thought the only way to save the shul was to turn it over to Rabbi Jacobson,” Landis said.

Pace lamented, “It was a great opportunity to find new people and to make us a more financially viable institution.”

Jacobson, meanwhile, disagreed with the suggestion that the saga might make it harder for the Meaningful Life Center to find a new permanent home in another synagogue.

“If anyone looks at the facts,” he said, “they will see we are the easiest people to work with.”