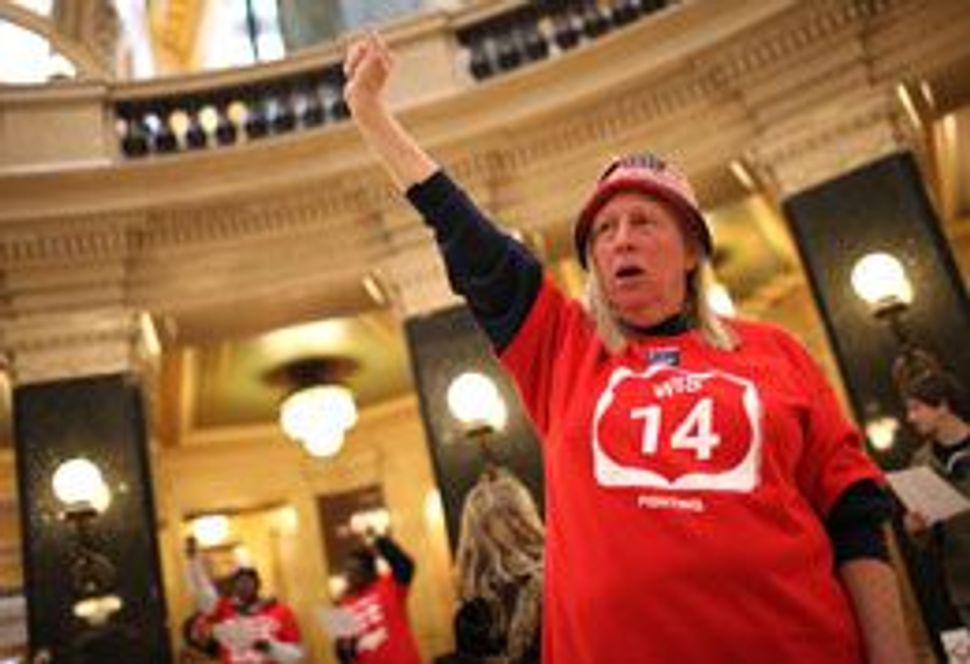 Union: The union struggle in Wisconsin has elicited support from 16 rabbis while federations remain silent. Image by GETTY IMAGES 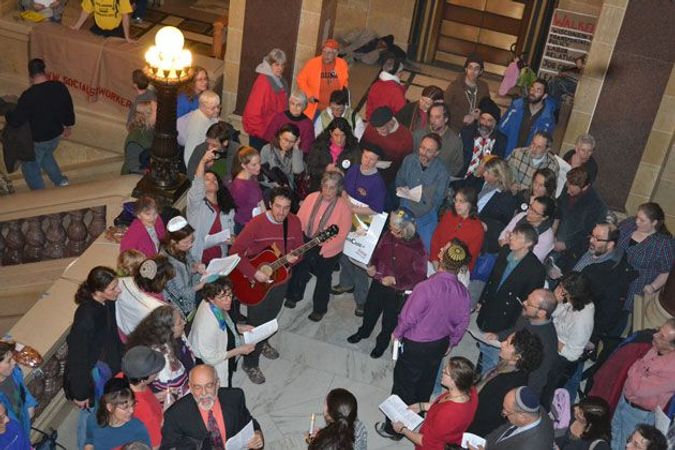 Shabbat in the Capitol: Jews protesting on behalf of public sector workers in Madison, Wis., gather for evening services Friday, February 25. Playing guitar and leading them in song is Aviv Kammay, center. Image by MORNA FOY

At Wisconsin’s Capitol building, in Madison, rabbis and other members of the state’s Jewish community have been a visible presence as protests have swelled in support of state and local public worker unions. But the community’s biggest and most politically influential bodies — its two federations and affiliated community relations councils — have been conspicuously silent. 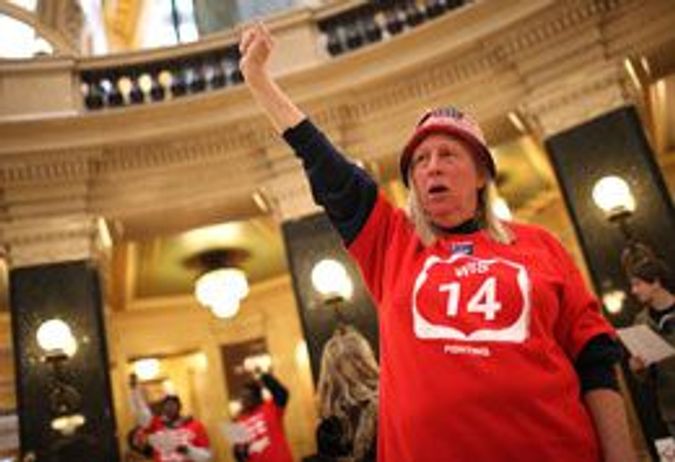 Union: The union struggle in Wisconsin has elicited support from 16 rabbis while federations remain silent. Image by GETTY IMAGES

Their absence, some critics charge, is a reflection of the outsize influence that wealthy donors exert over these organizations, even as many Jews are among the rank-and-file school teachers and civil servants who stand to see their collective bargaining rights diminished if legislation now on slate passes in the Wisconsin legislature.

Federations, said Avram Lyon, former executive director of the Jewish Labor Committee, “tend to be conservative. In order to not offend the conservative donors, the organizations tend to become hamstrung — particularly in places like Milwaukee. This is not something which is unique in the Jewish community.”

But Jerry Benjamin, president of the Milwaukee Jewish Federation, said that consensus building — not concern about offending major donors — is why the federations haven’t jumped into the skirmish.

“We always look for common ground, as much consensus as possible,” Benjamin said. “And that consensus is sometimes hard to find when there are sharply divided opinions.” But asked about the division of opinion in this case, Benjamin termed it “hard for me to characterize…I haven’t had many conversations.”

The question of Jewish organizational involvement has become more pointed as the conflict between the public worker unions and Republican Governor Scott Walker has escalated, capturing the attention of the nation. Partisans on both sides of the conflict have come to see Madison as a kind of testing ground. And the state’s estimated 24,000 Jews, though less than .5% of the population, have long had an outsized influence on its politics.

Until this year, for example, Wisconsin had two Jews representing it in the U.S. Senate. Russ Feingold, who was defeated in November, has been visible and outspoken in his support of the protesters, while Democratic Senator Herb Kohl has said he supports the demonstrators but has played no visible role in the dispute.

Walker, who was elected last November, proposed on February 12 a budget-repair bill that would virtually eliminate collective bargaining rights for most of the state’s public employees and make it much harder for them to organize. In response, workers, with strong support from the national labor movement, launched a series of daily protests at the Capitol, attracting tens of thousands of protesters, with many staying in the building each night. The protests are continuing.

Meanwhile, Walker has been unable to pass the bill, as the state’s 14 Democratic senators fled Wisconsin on February 17, preventing the state Senate’s Republican majority from assembling a quorum.

“For the federations, it’s a lose-lose situation,” said Rabbi David Cohen of Congregation Sinai in suburban Milwaukee, who has voiced support for the pro-union protesters. “What I’m seeing is some real division within the Jewish community as to whether Walker’s efforts are justifiable or not.”

To Lyon, who lived and worked in Wisconsin for about 10 years, this battle of wills and ideologies is “absolutely a Jewish issue.”

“The Talmud said a lot about how workers should be treated,” he said. “If you hire these workers and you lay them off, you have to pay them idle wages. That’s unemployment [insurance].”

But Benjamin noted that some of the Milwaukee Federation’s largest wallets belong to liberals, rebutting claims that rich conservative donors were pressuring his group to stay silent. These liberals, he said, include some of the state’s biggest trial lawyers and Kohl, the state’s remaining Jewish senator.

“Some of the most important progressive voices come from major donors,” Benjamin said.

“The goal of the federation is not to polarize people, but to bring people together,” Kahn-Oren said. “It’s a consensus organization… but that doesn’t mean that we run positions by the big donors for approval.”

Still, she said, with a sigh, “It could be complicated.”

Jill Hagler, executive director of the Jewish Federation of Madison, agreed. “We have people on different political sides; we have to be very careful as an organization,” she said.

Benjamin said that the Milwaukee Federation’s Jewish Community Relations Council would be discussing the issue at its next meeting, March 11, to see if a statement should be issued. But he declined to predict whether the council would form a consensus. “I can’t prejudge a process that hasn’t taken place,” he said. “Often we begin conversations, and a lot of time it gets nowhere.”

“Nothing is unanimous in any community, especially in the Jewish community,” agreed Rabbi Jonathan Biatch of Temple Beth El in Madison.

But Biatch, who has spoken at rallies on behalf of the protesters, said that sentiment at his 650-member Reform congregation, while not uniform, is clear. “The support and positive comments about my involvement greatly and far outpace those who might be uncomfortable,” he said.

Biatch, who leads Madison’s largest Jewish congregation, said that the decision to get involved the week the protests began was easy. “For this rabbi, the Torah and rabbinic tradition tell us to respect the worker and provide the worker with dignity.”

In fact, so far, 16 rabbis have publicly supported the unions, underlining a clear reality: Rabbis can be more independent than federations. At the same time, none have been evident so far in speaking up publicly for Walker’s side.

“We rabbis have the advantage of freedom of the pulpit,” Cohen said. In contrast to federations, he explained, their congregations, “afford us the right to be wrong.”

The 16 rabbis from across Wisconsin signed a letter chastising Walker. “Collective bargaining is a fundamental human right,” the rabbis wrote in their letter to Senate leaders.

On Friday, February 25 — a day when the Capitol rotunda filled with thousands of protesters banging away in drum circles and singing and shouting anti-Walker or pro-labor chants — about 150 people gathered on the second floor of the ornate building for Sabbath services conducted by four rabbis, Biatch said. The worshippers shared challah, but in deference to their location on state property they drank grape juice and used electric candles. “It was wonderful,” Biatch said.

The federations, meanwhile, will tread carefully in crafting a position.

“When you’re forming a new kind of statement, when you’re speaking for the entire Jewish conmunity, it takes several months of discussions,” Hagler said. “Because we’re Jews, after all.”