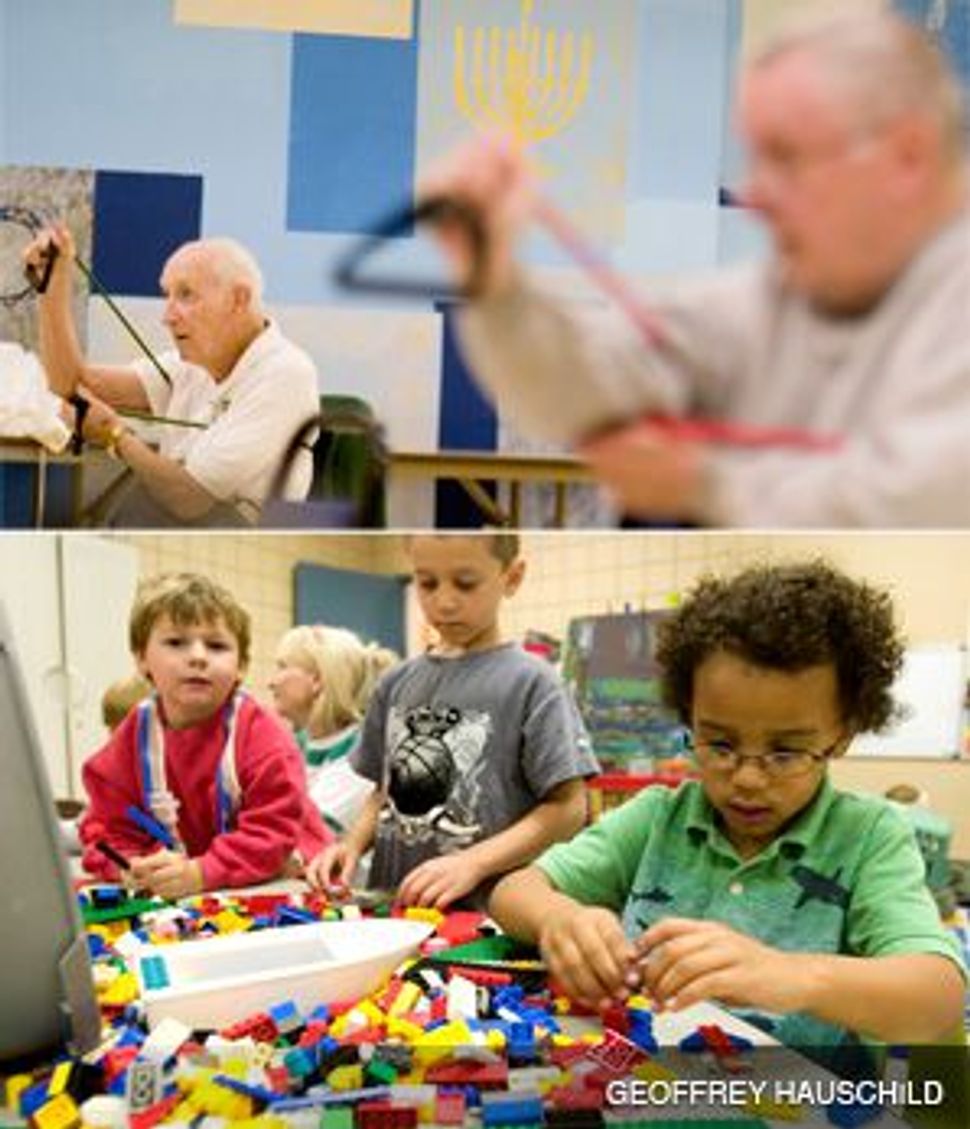 ALL ARE WELCOME: Top: Senior citizens take part in a fitness program at the JCC in Youngstown, Ohio. Bottom: Children?s day care draws a diverse crowd at the Youngstown JCC.

York, Pa. – The entrance lobby of the York Jewish Community Center in York, Pa., is decorated with all the traditional trappings of a JCC: paintings of Israel, a Holocaust memorial sculpture and a glass case with Judaica for sale. Yet, during a recent visit the center proved itself distinctly lacking in one key department: Jewish members. 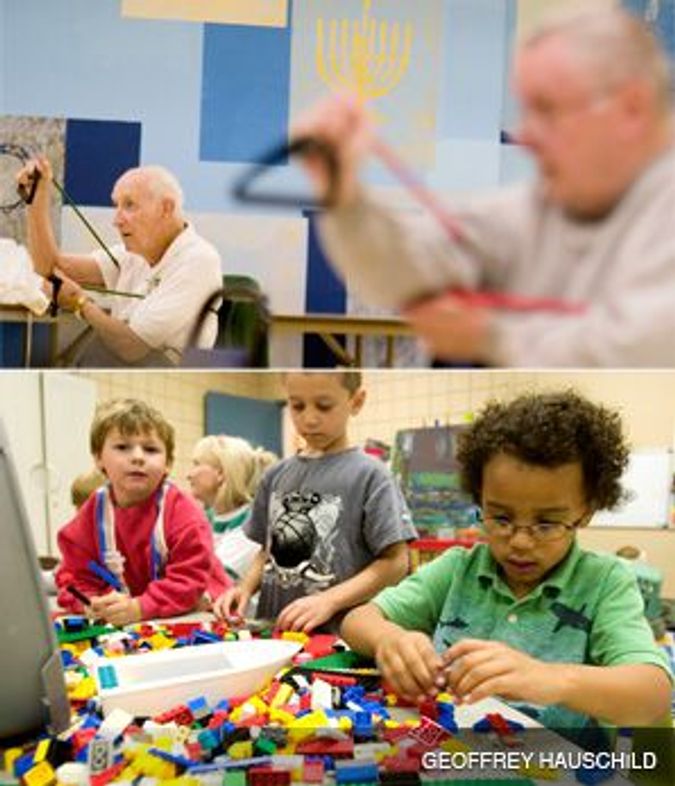 ALL ARE WELCOME: Top: Senior citizens take part in a fitness program at the JCC in Youngstown, Ohio. Bottom: Children?s day care draws a diverse crowd at the Youngstown JCC.

Of the 1,550 member units at the York JCC, only about 12% are Jewish. Even more striking is that the facility’s leaders aren’t distressed by this state of affairs; the center is operating exactly as planned.

“If we want the privilege of a JCC, it has to be this way,” said Randy Freedman, the center’s executive director. “There aren’t enough Jews in the community to support these kinds of services.”

The York JCC is one of a number of JCCs around the country where the vast majority of members aren’t Jewish. Located in cities with relatively small Jewish populations — places such as York; Albuquerque, N.M.; Salt Lake City; Schenectady, N.Y., and Akron and Youngstown, Ohio — each is a product of more or less the same phenomenon: In order to ensure that the Jewish community has the best possible facility, or even any facility at all, the JCC must open its doors to all comers.

And it appears that non-Jews are happily filling the void.

Though many JCCs do not gather data on how many of their members are Jewish, a number of JCC professionals in cities large and small are saying that an increasing percentage of their members are non-Jews. And JCCs are not alone among Jewish institutions opening their doors to wider audiences. The news organization JTA recently reported that Hillels on college campuses across the country have also been making an effort to bring in non-Jews.

Such developments, observers say, are a reflection of the profound ways in which Jewish interactions with the American mainstream have changed.

“There is, of course, a great irony,” said Jonathan Sarna, a professor of American Jewish history at Brandeis University. “Originally, these kinds of places — JCCs — were known as Young Men’s Hebrew Associations. They were created because Jews either were barred from, or were uncomfortable with, the Christian YMCA.”

JCCs and their precursors brought together a number of disparate demands on the part of American Jews, said David Kaufman, a professor of contemporary American Jewish studies at Hebrew Union College-Jewish Institute of Religion. According to Kaufman, who wrote “Shul With a Pool,” a history of JCCs and synagogue-centers in America, JCCs provided Jews with a secular place to gather with other Jews, a place that could Americanize new immigrants. When American Jews began to migrate to the suburbs in the 1950s and ’60s, JCCs became central institutions in Jewish suburban life.

For Kaufman, the growing presence of non-Jews at JCCs is a reflection not only of changes in American life but also of the JCC’s unique role.

“The JCC has never been the equivalent of a synagogue, which by definition is for Jews only,” Kaufman said. “The Jewish exclusivity that was assumed in the synagogue was never assumed for the JCC.”

That openness has become essential for many JCCs. Sandy Kessler, executive director of the JCC in Youngstown, said that when he took his job two and a half years ago, he quickly realized that Youngstown’s plummeting Jewish population meant that attracting non-Jewish members was essential for the center’s survival. The membership is now about 24% Jewish. In Albuquerque, the support of non-Jews made it possible for the community to build its first JCC in 2000, which now has more than 1,900 members, roughly 60% of whom are non-Jews.

Most of the non-Jews who have joined JCCs have essentially viewed the facilities as high-end gyms or top-flight nursery schools.

“It had everything we wanted — a gym and a pool,” Alex Kelly said while taking a break between sets on the leg press in the York JCC weight room. “It’s not like Gold’s Gym, where it felt like a meat market.”

But for other non-Jews, the JCC is more than just a place to get a workout. John Sandager, an evangelical Christian who is the treasurer of the Albuquerque JCC, became involved with founding his area’s JCC as an outgrowth of his efforts to connect with the local Jewish community and learn more about Judaism. He said that he attends Jewish programming regularly and that he appreciates the way his JCC brings together different faiths.

“When you work out at the JCC, one of the wonderful values of the JCC is it’s not Christians on these machines and Jews on those machines — it’s a community,” Sandager said.

The shift in membership has come even as observers say that the programming at JCCs has become more focused on Jewish matters over the past two decades.

“The overall trend over the last 20 years has been toward seeing the Jewish community center as a place for Jewish education,” said Steve Bayme, the American Jewish Committee’s director of contemporary Jewish life. “The level of Jewish content inside JCCs certainly has been growing.”

Still, the presence of more non-Jewish members has created a delicate balancing act for many majority non-Jewish JCCs as they try simultaneously to maintain a Jewish ethos and to accommodate the demands of both non-Jewish members and less observant Jewish members. Kessler said that when he arrived at the Youngstown JCC, he increased the level of Jewish décor in the center but also opened the JCC on the Sabbath and on Jewish holidays.

“If you’re charging the same as the YMCA and your other competitors, but you’re open 15 fewer days, you’re at a competitive disadvantage,” Kessler said.

But other JCCs have remained closed for part or all of the Jewish holidays and the Sabbath, often with encouragement from their non-Jewish members. Sandager said that he has encouraged his Jewish fellow board members in Albuquerque to stay true to the JCC’s mission as a Jewish institution.

“I said, ‘I respect whether you’re open or not, but don’t dilute your Judaism. The thing we respect is your faith,’” Sandager said.

In many ways, majority non-Jewish JCCs have found a formula for success; they have remained thriving institutions with strong Jewish programming. York-area businessman Tim Grumbacher was one of the primary movers behind the JCC’s decision in the 1980s to build a larger facility and actively welcome non-Jews as members. As a result, membership has expanded, the facility is first class, the center has a steady stream of Jewish programming and, in Grumbacher’s view, relations between Jews and non-Jews in York have improved. But Grumbacher confessed that he sometimes wonders whether the JCC has lost a certain sense of Jewishness that permeated the kibitzing and give-and-take in the old, smaller and mostly Jewish facility downtown.

“I’m somewhat conflicted over the results,” he said, “but I think it reflects what’s happening in the larger American society. I don’t know that there was another solution.”