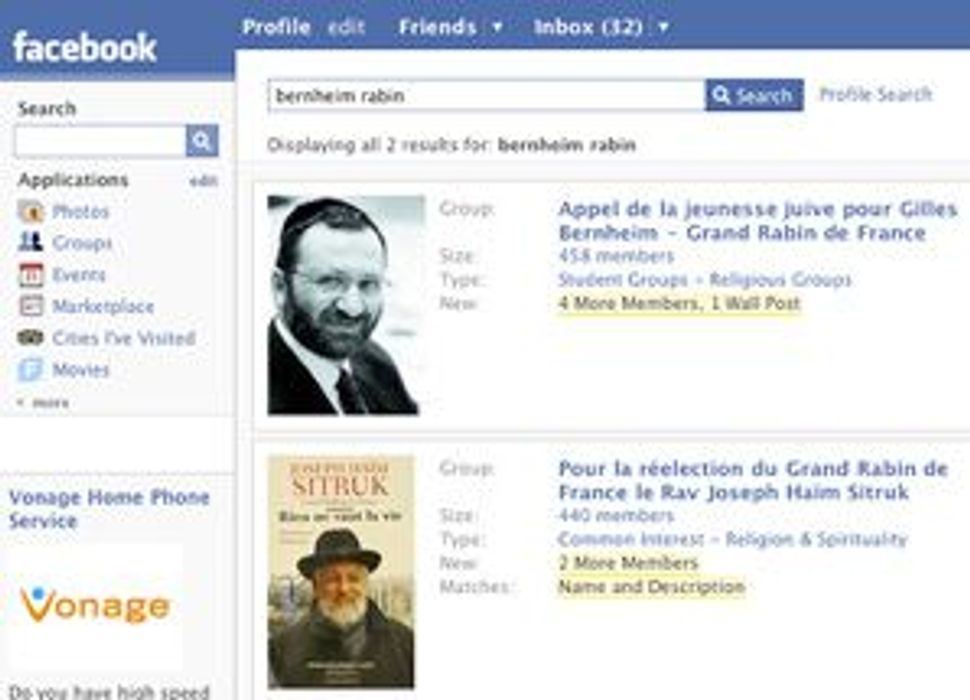 BY THE BOOK: The contest for France?s next chief rabbi has found its way onto the social networking site Facebook. 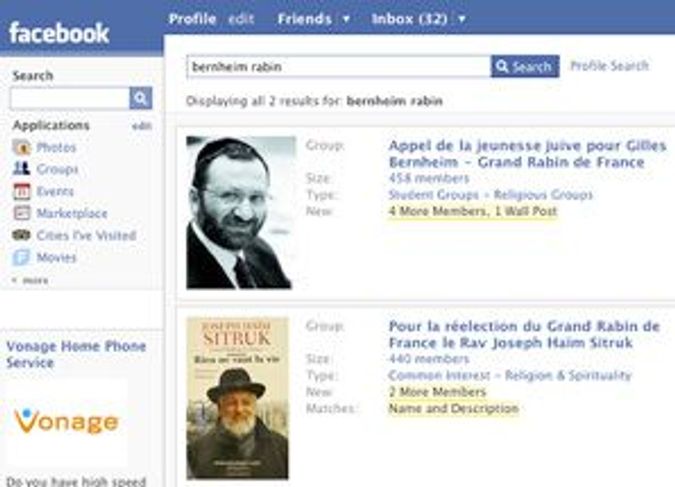 BY THE BOOK: The contest for France?s next chief rabbi has found its way onto the social networking site Facebook.

The election of France’s chief rabbi is generally a quiet affair decided by insiders. This year, thanks to the freedoms of the Internet, the campaign has turned into a raucous, innuendo-filled cyber-battle featuring Facebook pages, video postings — some of them fabricated — and furious blogging.

The Internet-fueled rancor has added an edge to the already stark opposition between the incumbent, Joseph Sitruk, a 63-year-old Sephardic rabbi known for his common touch, and the challenger, Gilles Bernheim, a 56-year-old Ashkenazic philosopher who is the rabbi of Paris’s largest synagogue. The June 22 election will be decided by some 300 rabbis and communal leaders.

In one posting on Facebook, a supporter of Bernheim said she was “floored” by the defamatory maneuvers of Bernheim’s detractors. “You would think this is a campaign taking place… in today’s Russia. I thought that the campaign for the election of the chief rabbi of France would be a respectful one.”

After weeks of sniping, the two main Jewish communal organizations in France — the CRIF and the Unified Jewish Social Fund, or FSJU — issued an unusual joint statement urging both sides to calm down.

“It appears that a series of verbal, written and visual slips is hurting the dignity of the campaign and risks giving a negative image of our community as a whole,” the June 3 statement said. “This is why CRIF and FSJU believe it is their duty to exhort the friends and supporters of the candidates to show restraint and keep in mind that beyond the democratic battle, the general interest of the community should prevail over any other considerations.”

Martine Cohen, an expert on French Judaism at the National Center for Scientific Research in Paris, said that there never has been an election like this.

“This is the first time such an election draws so much attention,” she said. “The new technology allows many more people to ‘connect’ and to have rumors spread on the Internet.”

The heatedness of the campaign seems to stem from the open forum provided by the Internet, but it also grows out of tensions between France’s long-standing Ashkenazic community and its younger Sephardic community — with a rabbi representing both sides.

France’s 600,000-strong Jewish community has been dominated by Eastern Europeans but has changed drastically with the massive influx of Jews from Morocco, Algeria and Tunisia who arrived in the late 1950s and early ’60s when those countries claimed their independence from France.

In recent years, after long resenting the prominence of Ashkenazim at the helm of most communal institutions, the Sephardim have made inroads and managed to obtain key positions, first and foremost the chief rabbinate.

While the tensions between the two communities have subsided in the past few years, the misgivings remain close to the surface. When CRIF elected an Ashkenazic president last year, some Sephardic Jews openly complained that two of the candidates were defeated simply because of their northern African origins.

In the current race, the contrast between the natural warmth and oratory skills of the Tunisian-born Sitruk and the scholarly and rigid manners of Bernheim, who hails from an Alsatian family, fit right into the Ashkenazic vs. Sephardic caricature.

The position of chief, or “grand,” rabbi of France was created by Napoleon in 1808 to serve as the Jewish community’s highest religious authority. The position is contested every seven years and acts mainly as a spiritual guide with no administrative powers. Sitruk has occupied the post since 1987, and Bernheim challenged him in 1994. At that time, the campaign went more smoothly and Bernheim was hampered by his intellectual image.

While both men are Orthodox rabbis, the charismatic Sitruk advocates a traditionalist worldview while the cerebral Bernheim stands for a more liberal approach and more openness to the world and to other faiths.

When Bernheim announced his candidacy back in February, he stressed that a chief rabbi should be present in the field. This was seen as a way of shedding his elitist image and as a sly allusion to Sitruk’s poor health (he is partly paralyzed after suffering a stroke in 2001).

As the campaign heated up, a video was posted by “an indignant rabbi” last month on the Web site Dailymotion.com. It was a tape of Bernheim’s announcement, in which he appeared to make disparaging comments about his opponent. The video turned out to be doctored, and Bernheim wrote a letter to Sitruk expressing his indignation.

Soon thereafter, a rabbi supporting the incumbent sent out a letter criticizing Bernheim for spending too much time with Catholics. The rabbi cited passages of a book that Bernheim co-wrote with a cardinal this year. The letter even seemed to justify the crucifixion of Jesus, prompting a Catholic official in charge of relations with the Jews to warn Jewish leaders of potential damage to interfaith relations.

As a result of the unprecedented public exposure, even the electoral process itself has come under criticism for its lack of transparency. Some 300 rabbis and local communal leaders from around the country will elect the chief rabbi, fueling some suspicion that the process was slanted in favor of the incumbent.

Cohen sees this type of questioning as a positive outcome of the unusual campaign, with ordinary people entering their concerns and questions into a previously cloistered process.