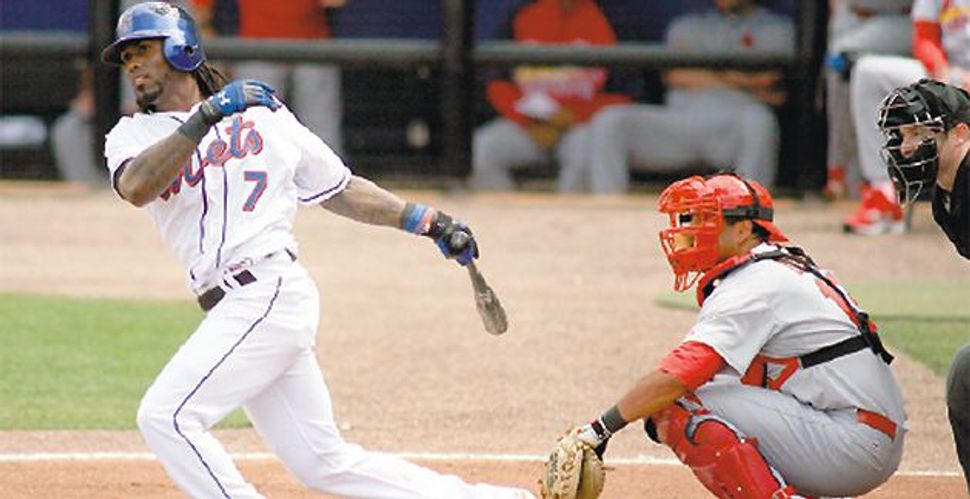 The weather is picture perfect at Digital Domain Park on this spring-training Sunday afternoon, but as every New Yorker knows, the overall picture for the Mets is far, far less than perfect.

On this day, however, the stadium, formerly known as Tradition Field and as the Thomas J. White Stadium before that — but never mind, everyone around here calls it Mets Stadium — is sold out. Even the SRO areas are filled to capacity, and capacity here means 7,800 fans, most of them root-root-rooting for the home team, who have called Port St. Lucie their spring-training home since 1988, when the stadium was built. Today’s opponents are the St. Louis Cardinals, still licking their wounds after a licking March 10 by the Detroit Tigers at Roger Dean Stadium, 40 miles south, in Jupiter.

These are the boys of summer, fresh and hopeful in spring. So even if back home in New York faith in the Mets matches the city’s chilly temperatures these days, the reception here is as sunny and warm as the afternoon.

“I will have to say this: I know nothing about baseball, but I believe that the Mets will survive, and they will win because they have heart,” says Don Lucy, a former resident of Maplewood, N.J., who worked for a construction company in Manhattan. “Cedar West,” he says, citing it by name. “I watched them build the World Trade Center.”

Lucy pauses to sell a gray-and-orange Mets T-shirt on the table in front of him, one of several vending sites out beyond the ticket windows. “Extra large? Your timing is good. Last one,” he tells the fan, then turns his attention back to the coming season and the Mets: “They have a loyal fan base. And I think they still remember — it’s a game.”

But for the team’s owners, the game has had higher stakes than usual these past couple of years: the so-called Madoff effect.

The three beefy guys sitting on folding chairs outside the SportsNet New York broadcast trailer are certainly familiar with the effect, but they’re not talking. No names. No opinions. No surprise, since the Mets own 65% of SNY.

“Can’t comment on what you don’t know,” one guy says.

“I’m waitin’ for the trial to find out what’s happening,” another says.

Ah, yes, the trial. That would be the potential trial over the lawsuit against Mets owner Fred Wilpon, filed last December on behalf of Bernard Madoff’s victims and alleging that Wilpon “knew or should have known” about Madoff’s mega-Ponzi scheme but chose to benefit from it. A figure of $1 billion is being mentioned as the amount the lawsuit seeks, to compensate investors.

Wilpon is currently deep in settlement discussions. And while no one knows how much he might eventually be forced to disgorge, the Mets owner has announced that he’s exploring the possibility of bringing in “one or more strategic partners… to address the air of uncertainty created by this lawsuit and to provide additional assurance that the New York Mets will continue to have the necessary resources to fully compete and win.”

Meanwhile, the third SportsNet guy says he knows what he knows from the New York Post, which recently floated an insider notion about possibly reducing the Mets’ payroll by selling off top-dollar players and building a new team, thus allowing Wilpon to retain ownership.

Steven Fink, who lives in New York’s Westchester County, is hopeful, if a bit discouraged, about the team’s future.

“I think they’re in deep trouble,” he says, a hand on the shoulder of son Matthew, 10. “I like Fred Wilpon. He’s a native New Yorker and a well-meaning guy, and he loves baseball. I think Madoff is a putz. Listen, I hope it works out, but I think they’re in a deep legal hole.”

Former New Yorker Yvonne Ortiz is hanging on to hope, too.

“Let me tell you,” she says between bites of a ketchup-slathered hot dog, “my son, he’s been a Mets fan since ’84. He’s very disappointed. I’m still a Mets fan, but I see this as even worse than last year.”

Still, says Ortiz, who is wearing a Brooklyn Cyclones T-shirt she drove down from Atlanta to see the game with her son, 30-year-old Bryan Ortiz. “I’m just a mom,” she says, “and I love him.”

Meanwhile, back on the field, the Amazins are having an amazin’ day. Third inning: Luis Hernandez triples, putting two up on the scoreboard. Hernandez comes home soon afterward, thanks to a Luis Castillo single. A David Wright hit to center brings in Angel Pagan later in the inning, but Wright gets thrown out at the plate.

Still, it gets better from there: at least one run in the fourth, fifth, sixth, seventh, eighth and ninth, for a final Mets victory of 13 to 3.

Still, this game aside, the overarching odds don’t appear to favor the team, so maybe it’s just the sunshine or preseason optimism that colors the mood and prompts the cheers here. But these are fans who gotta believe.

Fink grins at the notion. “Yeah,” he says, “I just saw [a picture of] Tug McGraw on the wall over there, and that’s what he said: ‘Ya gotta believe.’”