The ‘Other Muslim’ in Congress 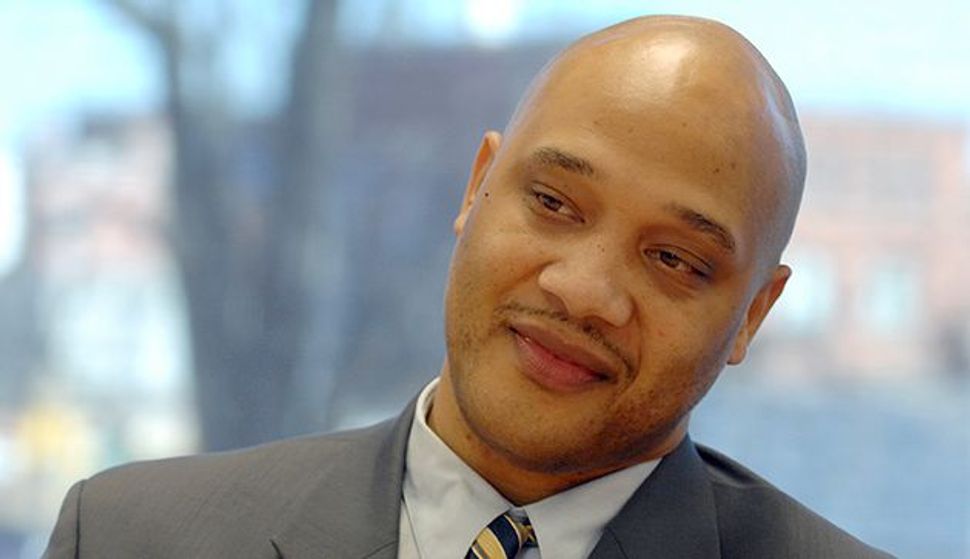 Other Muslim: Indiana Democrat Andre Carson is the lesser-known Muslim member of the United States Congress. Image by GETTY IMAGES

From his all-American name to the clean cut of his smart, well-tailored suit, Indiana Democrat Andre Carson defies the stereotypes that many Americans may have of Muslims.

But like Keith Ellison, his fellow Muslim and Democrat from Minnesota, the Indiana congressman belies a number of preconceptions. For one, there are his warm relations with the Indianapolis Jewish community.

“He is definitely a friend. I like the guy,” said Marcia Goldstone, executive director of the Indianapolis Jewish Community Relations Council.

Then there was his support for Israel’s military campaign against Hamas in Gaza in 2008 and 2009.

In the House of Representatives, it was Ellison who took center stage at the controversial March 10 hearings chaired by New York Rep. Peter King, a Long Island Republican, on domestic Islamic extremism. Ellison’s tearful recounting of how New York City police cadet Mohammed Salman Hamdani died saving lives on 9/11, only to be suspected as a perpetrator, was meant as a rebuke of King’s broad-brush, as he saw it, in depicting the American Muslim community.

Carson, a former law enforcement and homeland security officer detailed to a counterterrorism unit, also testified at the hearing and shared Ellison’s sentiments.

“One gets the sense that perhaps Mr. King was probably more concerned about increasing his national profile than really unearthing truths about radicalization in this country,” Carson said in a March 14 interview with the Forward at his Capitol Hill congressional office.

Despite such criticism before, during and since the hearing, King was adamant that focusing on the Muslim community was crucial to shoring up domestic security. “I have no choice,” he told NewJerseyNewsroom.com. “There are elements in that community that are being radicalized, and I believe that the leadership, the leaders of that community, do not face up to that reality.”

Carson, a young lawmaker with a life story that weaves political activism with religious searching, said that the King hearings were a bitter reminder of the personal hurdles he had faced. “There were some pretty hurtful things,” Carson said. “Growing up as a young black American — couple that with the religion, and you have double suspicion, double assumptions.”

Carson, who was first elected to Congress in 2008, does not wear his religion on his sleeve. He attends prayers in Washington and at home in Indianapolis, and willingly engages in conversations about his faith. But his politics focus on other issues: consumer protection, housing and fighting poverty. These are the issues that he believes are on the minds of constituents in his district, which includes Indianapolis’s inner city and is nearly 30% African-American. Ellison, who was elected in 2006 as Congress’s first Muslim, is a frequent speaker on behalf of American Muslims, leaving Carson to be referred to at times as “the other Muslim congressman.”

A demonstration of what Carson’s real concerns are was provided in a videoconference meeting he held from his office with Charles Ware, a local pastor of Indianapolis’s Crossroads Bible College. “How can we pray for you?” the pastor asked. Carson replied, “I’d appreciate a prayer for protection against budget cuts.”

There are only an estimated 2,000 Muslims in Indianapolis, which is also home to the headquarters of the Islamic Society of North America. Carson, however, does not see his religion as a barrier. This he credits, in part, to having the community “watch me grow up” and to it being “patient with my evolution.” Carson came of age in the heart of Indianapolis’s political scene. His grandmother, Julia Carson, represented the district in Congress until her passing in 2007. Carson’s path to Islam went through many stations. He grew up in a Baptist family but was sent to a Catholic school, where he was an altar boy with thoughts of priesthood. His priest suggested he read more about other religions, and so the young Carson began to study the writings of the Persian Sufi poet Rumi and the books of Rabbi Abraham Joshua Heschel. “The rabbi’s words were measured, clear, simple and easy to follow, much like the priest during mass,” he recalled during the interview. “I was very moved by the monotheistic [belief] and by the commitment to service and commitment to making the world better.”

But his search continued. Carson first got acquainted with Islam through “The Autobiography of Malcolm X” and by observing the Nation of Islam activists and Five Percenters on the streets of his neighborhood. “You had these groups, though controversial, they were the only [ones] who drug dealers were afraid of,” Carson said. “So that kind of nontraditional approach was very appealing in the community, because it garnered a certain amount of respect.”

Eventually, Carson turned to a different kind of Muslim belief. Influenced by other family members and intrigued by Sufi mysticism, he chose mainstream Islam. Carson said one of the things he found appealing in the Islamic experience was the multiracial integration he saw in mosques. His attraction to the Nation of Islam, with its preaching of black racial superiority, faded away.

Nevertheless, Carson has been criticized for alleged ties to the group since Nation of Islam leader Louis Farrakhan attended Julia Carson’s funeral and gave a eulogy. Farrakhan is known for his anti-Semitic rhetoric. But Andre Carson later explained that he had nothing to do with Farrakhan’s presence at the funeral.

The Farrakhan incident did not strain his relations with the Jewish community in Indiana, Carson told the Forward. “They know where I stand,” he said. “They know I’m not an anti-Semite; they know I’m Andre.”

Goldstone confirmed that the community holds no grudge. “It had nothing to do with Andre,” she said.

Indianapolis is home to some 11,000 Jews, and most do not reside in Carson’s congressional district. Still, for the local Jewish community, Goldstone said, the Muslim lawmaker is an enthusiastic partner on social issues and a reliable voice on Israel. She added, however, that like many young congressmen, he is still learning about foreign policy issues.

Carson, who visited Israel last August and met with Prime Minister Benjamin Netanyahu and opposition leader Tzipi Livni, has a solid voting record on Israel and attended the annual conference of the American Israel Public Affairs Committee last year. After the Gaza military operation of 2008, Carson supported a resolution backing Israel, a vote that triggered some criticism against him from pro-Palestinian activists. Ellison did not support the resolution. Shortly after the military operation ended, Ellison took a trip to Gaza, in which he spoke out against Israel’s blockade of the territory after its military operation.

The ‘Other Muslim’ in Congress