Gay Community Faces Rift Over Cancellation of a Pro-Palestinian Fundraiser 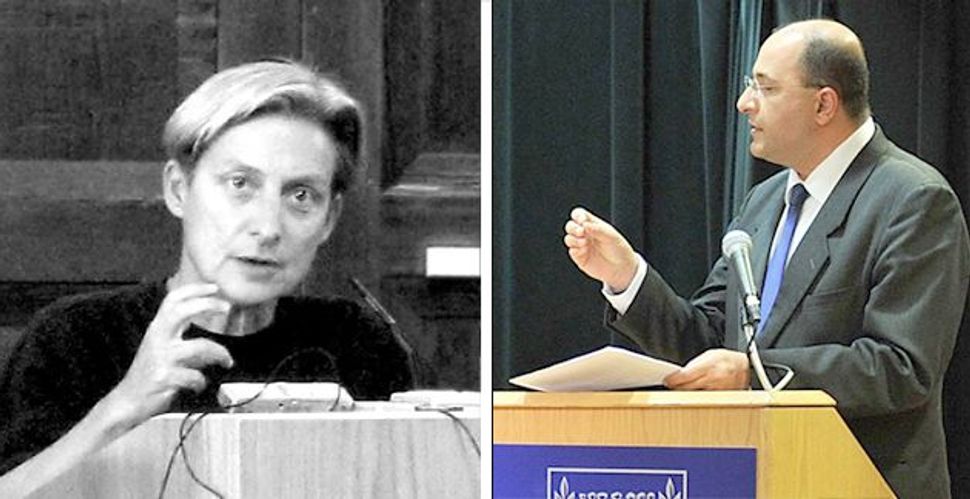 They’ve long faced off on college campuses and in the media, and now Israel’s supporters and detractors are in a pitched battle for the hearts and minds of the gay and lesbian community.

This fight bubbled over earlier in March when New York’s Lesbian, Gay, Bisexual & Transgender Community Center canceled a pro-Palestinian group’s event for which the center had rented its space. The cancellation followed complaints from supporters of Israel within the gay community.

The center’s move set off a heated dispute within the gay community. In this debate and elsewhere, Israel and its supporters are highlighting the Jewish state’s progressive attitude toward gay and lesbian issues. Pro-Palestinian voices, meanwhile, accuse Israel of “pink-washing” its conflict with the Palestinians.

“This is considered to be a use of gay and lesbian rights in order to deflect from, and justify, the widespread decimation of basic human rights for other populations, or even for minority queer populations,” said Judith Butler, a professor of rhetoric and comparative literature at the University of California, Berkeley and an influential figure in the field of queer theory, in an e-mail.

Butler has criticized the LGBT Community Center for canceling the March 5 event, titled, “A Party to End Apartheid.” The event was organized by a group called Siege Busters in order to raise money for another flotilla to Gaza. It was part of a nationwide set of events hosted by various groups under the banner of Israel Apartheid Week.

Lucas’s threat of boycott and complaints from other gay Jews eventually led the LGBT Community Center to call off the event. In a statement, the center’s executive director, Glennda Testone, said the dispute surrounding the event “began to distract from our core mission.”

Many supporters of Israel in the gay community applauded the center’s move. But the cancellation also brought accusations of censorship, with a number of prominent gay activists signing a petition protesting the center’s decision. On the day that the event had been scheduled to take place, a group of 150 pro-Palestinian activists staged a protest outside the center.

“Personally, I would not want to be part of a queer community that does not support rights for every person, including Palestinians,” said Hannah Mermelstein, an activist with Adalah-NY, a group that supports boycotting Israel. “For me this does not square with the values of the LGBT community.”

Supporters of the Palestinian cause within the gay community argue that Israel and its supporters are deliberately trying to shift the discussion toward the issue of gay rights in Israel, instead of talking about the conflict with the Palestinians. “This is the core of pink-washing,” Mermelstein said. “My question is, so what? Does this mean that people should support Israel and not the Palestinians?”

But supporters of Israel disagree.

“Pink-washing is a fundamental misnomer because there is nothing to wash. Israel actually is progressive when it comes to LGBT rights. So there is nothing to wash. You can’t pink wash a fact,” said David Kaufman, a New York-based journalist who has covered Israeli culture and society for the past decade. Kaufman was among the first to describe Israel as a gay-friendly haven in the Middle East.

An interactive map on Amnesty International’s website drives home this point. It shows Israel as the only country in the region that not only refrains from legally persecuting gays and lesbians, but also has laws preventing discrimination based on sexual orientation, allows gay and lesbians to serve in the military and permits gay adoption. All Arab countries surrounding Israel, including the Palestinian Authority, limit the rights of gays and lesbians.

Butler, however, said that it would be “quite simplistic and false” to assert that Palestinians are homophobic and Israelis are not. She said that there are “modes of living as queer” within Palestinian areas and “modes of virulent homophobia among right-wing religious people” in Israel. “So the dichotomy is false,” she concluded.

Israel’s liberal approach to gay issues is viewed both by Israeli diplomats and pro-Israel activists an asset in its campaign to brand Israel as a progressive country with Western values.

Israel’s consulate in New York has been actively pursuing this agenda, both by holding meetings with activists in the gay community and by spreading the news about Israel’s openness on gay issues via various means. In response to a tweet from the consulate about Israel’s first openly gay judge, a Twitter user asked why Israel is talking so much about being gay-friendly. The consulate tweeted back, “Mel Brooks said it best. ‘When you got it, flaunt it!’”

Ido Aharoni, Israel’s consul-general in New York, is the driving force behind Israel’s branding effort and the idea of focusing public diplomacy on issues beyond the Israeli-Arab conflict.

“Branding means that it is just as important for Israel to be attractive as it is to be right,” Aharoni said. He said that the gay community is “one niche among many we are trying to reach out to,” and stressed that by doing so Israel is talking to each community “about issues they care about.”

The gay community is, according to Aharoni, part of the “progressive elite” with which Israel sees special value in forging ties with. “These are trend-setters,” he said.

Stressing Israel’s openness to gay issues is seen as an opportunity to build bridges to liberal and left-wing circles that have grown increasingly critical of Israel in recent years.

The Jewish community has also been quick to follow up on the issue. A flyer produced by the Anti-Defamation League for campus activists asks: “Which of the Middle East nations protects the legal rights, safety and freedom of the LGBT communities?” The answer, in bold pink letters: “Only Israel.” Last November, The Israel Project issued a press release titled “Israeli Duo Become World’s First Same-Sex Pair on

‘Dancing with the Stars.’” And during the heated debate about repealing the American military’s “Don’t Ask, Don’t Tell” policy, Israel’s supporters highlighted the Israeli military’s acceptance of openly gay soldiers.

The Jewish National Fund recently established an LGBT committee in which members of the gay community organize to raise funds for scholarships to send students to study in Israel. “We were answering a need of the community,” said Shira Berenson, campaign executive at the Greater New York JNF.

The battle over Israel in the gay community is playing out abroad as well. In Toronto, Mayor Rob Ford recently announced that he was pulling municipal support for a gay pride week planned for June because of the participation of a group called Queers Against Israeli Apartheid. And in Berlin, pro-Palestinian gay activists protested Israel’s exhibition at the city’s international travel trade show, which featured the Tel-Aviv Gay Vibe campaign.

Gay Community Faces Rift Over Cancellation of a Pro-Palestinian Fundraiser