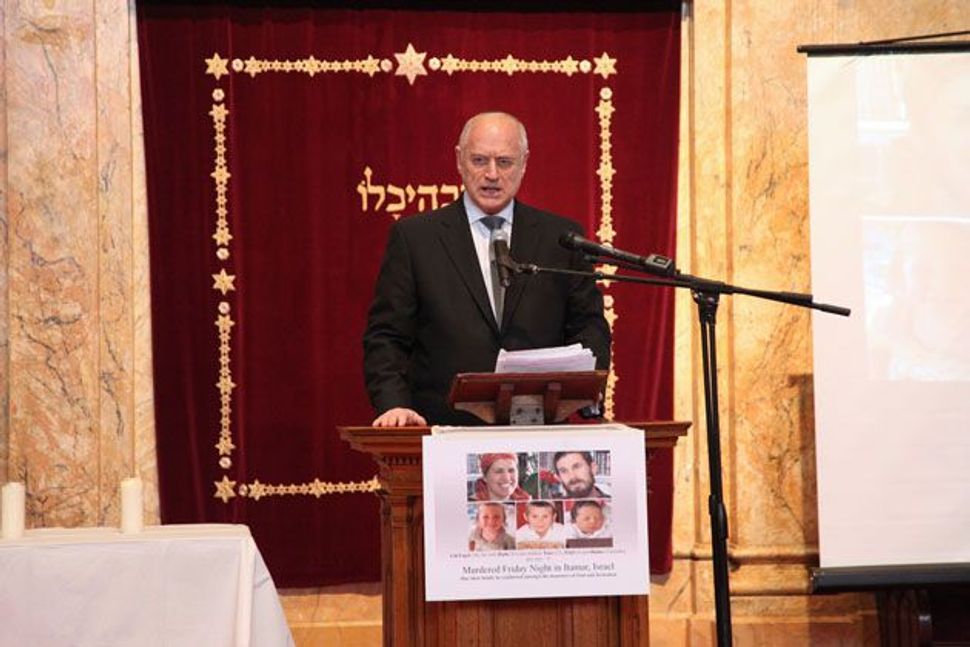 Remembering the Fogels: Malcolm Hoenlein speaks at a memorial service in Manhattan. Image by Conference of Presidents

The two adults and three children murdered in the West Bank Jewish settlement of Itamar last week were killed not because they were settlers but because they were Jews, American Jewish leaders told a New York memorial service for members of the Fogel family Thursday.

The hour-long service, held at Congregation Kehilath Jeshurun on New York’s Upper East Side, eulogized the family’s courage as some 1,000 attendees – and another 2,000 viewers of a live streaming of the event – mourned the victims, who were stabbed to death in their home March 11. Women sobbed and men covered their face with their hands as speakers called for greater support for Israel and for Jews living in the occupied territories.

“They were treated as criminals for settling and building beautiful lives in the heartland of our ancestral holy land,” said Rabbi Yaakov Kermaier, president of the New York Board of Rabbis. “Did we protest loud enough? Did we fight strongly enough on their behalf? Did we share with them at the most minimal level that is expected of us who choose to live in the Diaspora the burden and the responsibility to keep them safe and demand that they be treated by the world with dignity?”

Kermaier asked for “mechila,” forgiveness, from the Fogels as a somber audience stood hushed. “They have carried the weight of our people and shouldered responsibility that we should share, but which we don’t,” he said.

On stage photos of Udi and Ruth Fogel, and their young children Elad, Yoav and three-month-old Hadas were projected on a large screen as speaker after speaker stressed that the murders were a crime and attack against all Jewish people.

“It is not where they lived that brought this about,” said Malcolm Hoenlein, the executive vice chairman of the Conference of Presidents of Major American Jewish Organizations, recalling earlier terrorist attacks in cities such as Tel Aviv, Haifa and Kiryat Shemona. “It is because they were Jews living in Israel.”

Invoking the oppression of Jews in Germany that preceded the Holocaust, Hoenlein lashed out at reports on the atrocity that questioned the family’s residence in the occupied territories.

“When the media shifts the focus from the perpetrator to the victim, when they denigrate the murdered to justify the murderers, when they ignore and just put a small notice in the middle pages….where is the outrage?” he said. “I am wary of comparisons of the 1930’s [but] all too often now I am brought back to that period.”

Meron Reuben, the ambassador of Israel to the United Nations, demanded that the leaders of the Palestinian Authority “speak with one voice clearly” to condemn the murders and criticized “the culture of incitement pervading Palestinian institutions that glorifies violence and demonizes Israelis and Jews.” Like most of the other speakers, he called the attacks a crime against all Jews.

[After the attack, Salam Fayyad, prime minister of the Palestinian Authority, condemned the murders. P.A. president Mahmoud Abbas deplored the murders as “inhuman and immoral.”]

Reverend Jacques DeGraff, pastor of the Canaan Baptist Church in Harlem was the only one to receive a standing ovation from the audience when he denounced the injustice of the murders and expressed solidarity with the Jewish community. “It was not just another episode over there, it impacts all of us….The pain that you feel, the outrage that you feel, we shall never forget and we shall overcome.”

Among the hundreds in the audience, Leah Murray, 76, rebuked American Jews who “tend to be very concerned with the welfare of our enemies. I think that weakens us.”