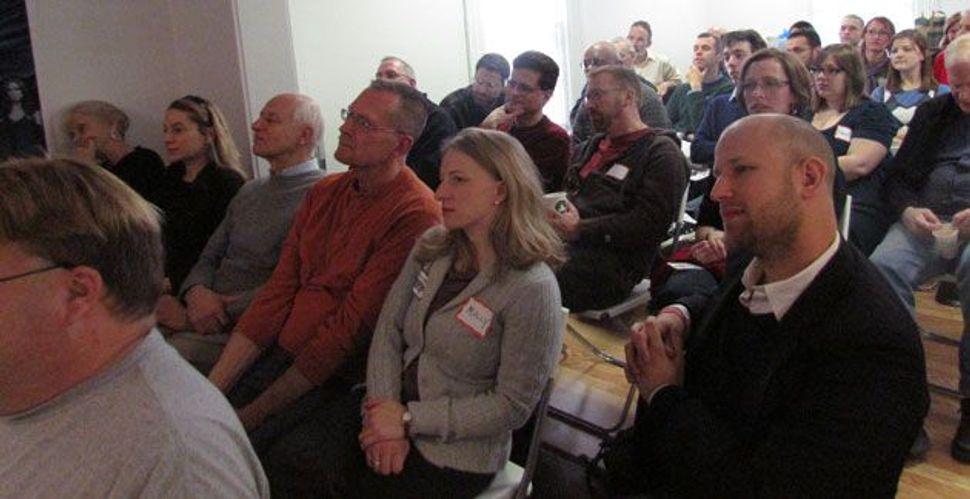 The morning yoga session was over, and now he was helping a local folk singer get set to play during the potluck brunch, all the while welcoming the guests streaming into the new humanist community center in Harvard Square. And then the featured speaker arrived, a former NPR journalist working on a book about atheism among African Americans and other minorities.

“We’re still figuring all of this out,” Epstein said in passing.

Epstein is Harvard’s humanist chaplain. He’s also a humanist rabbi, ordained by the International Institute for Humanistic Judaism, the movement started in the 1960s in Michigan by Rabbi Sherwin Wine. Epstein’s greatest claim to fame, however, may be as author of the 2009 best-selling book “Good Without God: What a Billion Nonreligious People Do Believe.”

With the new community center, Epstein was now, on a weekly basis, trying to answer a new question: What do a bunch of nonreligious people do when they meet as a community?

Epstein insists he’s not out to poach souls, as it were, from the nearby Hillel House, the Catholic Newman Center, or any of the other august religious institutions with deep roots on and around the campus of the country’s most prestigious university.

“I don’t see us competing, because there’s so many options around here,” said Epstein, a dapper, charismatic, 34-year-old with a shaved head and stubble. “But I think this provides an option that is sorely needed. It provides additional bandwidth on the spectrum, a set of ideas that I think people are going to find very powerful.”

The core idea of humanism might be best summed up in the preface of Epstein’s book: that people can “lead good and moral lives without super-naturalism, without higher powers, without God.”

To be sure, the humanist community center, which very well may be the first of its kind in the country, is a humble affair, occupying three rooms in a third-floor walkup. But judging by the capacity crowds that have been coming to its Sunday community meetings — the center’s answer to weekly religious services — it would appear that Epstein’s message is resonating, at least in some circles.

One regular congregant is Chelsea Link, a junior at Harvard. Growing up, she explored a range of religious faiths, gravitating at one point toward Judaism (her father’s background) and to the New Age Christian spirituality of her mother (“I had my auras read many times”).

But by the end of her freshman year, Link was ready to declare herself an atheist. Her evolution crystallized when she attended an event at the center in honor of Joss Whedon, creator of the “Buffy the Vampire Slayer” TV series. Whedon was the 2009 recipient of the humanist center’s annual Outstanding Lifetime Achievement Award in Cultural Humanism. The event, and those for subsequent award winners Jamie Hyneman and Adam Savage, aka TV’s “MythBusters,” and for British author, actor and comedian Stephen Fry, helped put the center on the map.

Link steadily got more involved with the center. “I hadn’t really even heard of humanism before,” she said. “It was just a lot more positive [than atheism]. It wasn’t just, ‘Let’s talk about what we don’t believe in.’ It was a really cool feeling.”

But as a Harvard student, Link is not representative of the center’s main constituency, at least not those at the Sunday meetings. So far, most of the attendees have been older professionals — many of them academics — from around the Boston area and beyond.

It’s a big tent by design. As Harvard’s humanist chaplain, Epstein ministers to students’ emotional and spiritual needs (the position goes back 35 years), but the program receives no funding from the school. Private donors fund the chaplaincy and its expanding programs. Epstein says that the center’s budget was $28,000 when he assumed the chaplaincy in 2005, and this past year it was about $250,000, coming from some 200 individual donors.

Erik Gregory, a clinical psychologist who lives in downtown Boston, is a more typical representative of the crowd at the community center, which opened last summer, quickly outgrew its space and then reopened this year in its Harvard Square location. Like several of the people queried at the center, he comes to humanism via Judaism, if by a somewhat circuitous route.

Raised in Salt Lake City in an interfaith family (his father was Sephardic), Gregory helped establish the only Reform Jewish congregation in downtown Boston. But the humanist center, he said, appeared to be tapping into something more accessible and necessary in today’s world.

“I think people are very hungry for community — one based not on material acquisition or consumption — that builds more on the contribution one gives outside the self,” Gregory said.

He added that he believes there’s a fundamental compatibility between humanism and Judaism. “Jews don’t believe in heaven or hell. We don’t know what comes after this world,” he said. “The Jewish tenet is, we make heaven a place on earth by helping each other. I see this center as taking that tenet and running with it.”

Another regular participant at the center is Rick Heller, who leads meditation sessions at the Sunday community meetings. “The idea is not to just have intellectual debates, but get into the emotional and psychological side of things,” he said. “Not just the head, but the heart.”

The roster of guests featured at the humanist center’s meetings reflects the center’s heterodox approach. There was Michael Chapman, a documentarian who has focused on the rise of neo-creationism and who happens to be the great-great grandson of Charles Darwin; a noted Pakistani TV journalist, and former NPR journalist Jamila Bey, an African American atheist. She also played in a professional women’s football league.

“I tell people my mother is Christian and my father was a nonpracticing member of the Nation of Islam, and I married a secular Jew,” Bey said at a recent Sunday meeting. “People laugh and ask, ‘Are you serious?’ That’s when I decided to also try stand-up comedy.”