JCCs Are a New Front in the Culture War on Israel 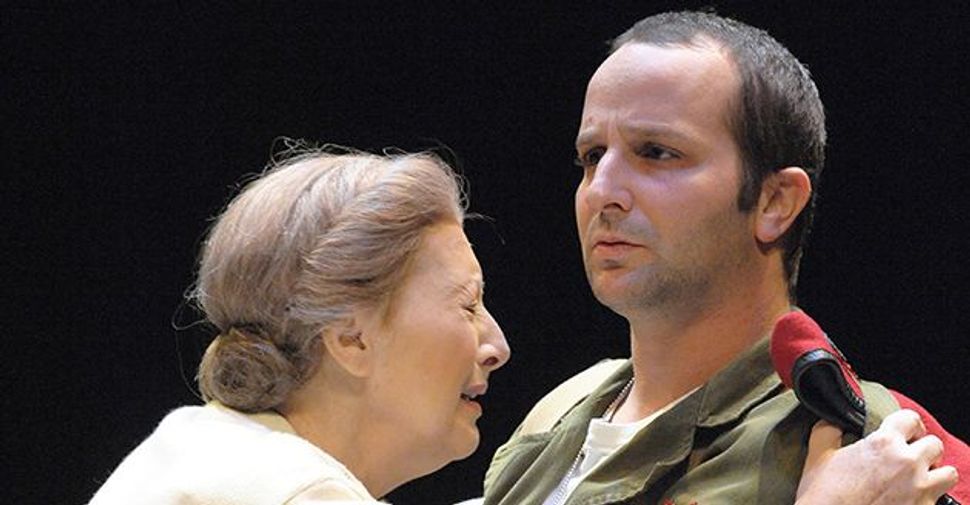 Jewish Community Centers, known for their fitness facilities and child care services, are increasingly becoming the target of protesters taking issue with the artistic programs they offer.

In Washington, a new grassroots organization is calling on the local federation to adopt guidelines that will withhold funding from the JCC if the center’s theater puts on plays that “denigrate Israel and undermine its legitimacy.” In New York City, a group called JCCWatch is taking aim at the JCC in Manhattan for partnering with such groups as the New Israel Fund, B’Tselem and Human Rights Watch in supporting the Other Israel Film Festival.

In the middle of this fight stand the Jewish federations, the community’s philanthropic backbone, torn between their wish to maintain the artistic freedom of the community’s beneficiary agencies and their need to satisfy angry donors who control the purse strings.

“I don’t want to infringe on anyone’s freedom of expression, but why should it be from my federation contributions?” asked Louis Offen, who describes himself as a “significant donor” to the Jewish Federation of Greater Washington.

Offen, a retired physician and lawyer from Chevy Chase, Md., has demanded that the federation put Ari Roth, artistic director of the Washington DC JCC’S Theater J, on “a shorter leash.” Two years ago, Offen cut back his charitable giving to the federation because of Theater J’s reading of the play “Seven Jewish Children” by British playwright Caryl Churchill. The theater held a critical reading of the play, which speaks of Israeli wrongdoings toward the Arab population, and coupled it with “dramatic responses” from other artists that presented Israel more favorably.

Offen increased his donation the next year, but said he is once again threatening to slash support for the federation. “They should know that I and others are dropping away,” he said. “If the federation decides it can live without donors like me, that’s fine, but I think they’re making a huge mistake.”

Roth, in response, said that intervening in artistic content “is not a prerogative of the donor.” The artistic director, who made Theater J a leading critically acclaimed company, added that attempts to limit the theater’s freedom amount to censorship or, worse, to blacklisting.

Under the name Citizens Opposed to Propaganda Masquerading as Art — the local D.C.-area organization seeking to rein in Theatre J has staged protests in the past outside the JCC. Its members met when they were active in a watchdog group that monitored The Washington Post’s coverage of Israel. A few are also active in the organization Holocaust Museum Watch. Their March 6 letter to Susie Gelman, president of the Jewish Federation of Greater Washington and to all board members, lists the group’s reservations over Theater J’s decision to read “Seven Jewish Children.”

The group also opposed the theater’s invitation in January to Israel’s Cameri Theater to perform “Return to Haifa,” a play adapted from a novella by Palestinian author Ghassan Kanafani, who died in a Beirut car bomb attack in 1972. The author was also a spokesman of the Popular Front for the Liberation of Palestine, a group that conducted terrorist actions during the 1970s. The play, which won praise from Washington theater critics, tells the intertwining stories of an Arab family that fled its house in Haifa during the 1948 war and a Jewish family of Holocaust survivors now living in that house.

“Showing it in Israel is different. Showing it in any theater in America is fine, but people don’t give money to the federation to support the denigration of Israel,” COPMA treasurer Carol Greenwald argued.

In their letter to federation leaders, COPMA demands the adoption of guidelines “for withholding funding from partner agencies that engage in political propaganda and activism denigrating Israel and undermining its legitimacy as a strong, secure and independent Jewish state.”

In response, the Washington federation provided the Forward with a written statement saying, “Federation leadership considers this to be a serious matter and is taking the issue of funding guidelines under advisement.” The federation declined to comment on specific questions relating to funding the JCC and Theater J.

The model suggested by COPMA for guidelines is the one adopted early last year by the Jewish Community Federation of San Francisco, following a similar debate in the community. These guidelines state that the federation will not fund grantees that advocate or endorse the undermining of Israel’s legitimacy “as a secure, independent, democratic, Jewish state,” including through participation in boycott, divestment and sanctions.

“There are things a Jewish community shouldn’t be doing, like serving a bacon cheeseburger on Yom Kippur,” said Andrew Apostolou, a local Jewish Community Relations Council member who has asked for a public discussion over funding guidelines. “Putting on an anti-Semitic play is one of these things.”

But professionals in the field of Jewish arts and culture view the San Francisco guidelines as bad news. “They had a very chilling effect on the cultural community, because they are too vague,” said Elise Bernhardt, President and CEO of the Foundation for Jewish Culture. She explained that with no clear definition of what constitutes de-legitimization of Israel, the guidelines serve only to make artists’ life “very difficult.” Bernhardt’s group, which funds programs in all fields of art, has also faced debates within its board about borders and rules. But only once was there a decision not to fund a film. “If we tell artists what to say or what to do, we won’t get good art,” Bernhardt said.

The debate is not only over artistic principle. For JCCs, it is also about real money. The DCJCC receives $600,000 a year from the federation, a sum that makes up about 8% of its annual budget. A drive for guidelines that would deprive the JCC of federation money because of unacceptable shows put on by Theater J could limit the JCC’S ability to provide other services. “I don’t believe in formal guidelines,” said Arna Meyer Mickelson, CEO of the DCJCC, ”but that does not mean we don’t have a philosophy that guides our work.” This philosophy, she explained, includes “welcoming multiple voices” while rejecting the principle and tactics of BDS. In practice, this translates to including BDS supporters in panel discussions, but keeping the debate balanced and expecting “that the discussion will not support BDS.”

The Washington debate echoes a similar discussion in New York. There, too, community leaders have lately advocated for a “big tent” approach. Writing in the New York Jewish Week on February 15, John Ruskay, executive vice president and CEO of UJA-Federation of New York, spoke out in defense of the JCC in Manhattan, which has come under attack following the Other Israel Film Festival, a showing of films highlighting the lives of Arabs and other minorities in Israel.

Nevertheless, in 2007, UJA-Federation itself abruptly pulled out of co-sponsoring that year’s Other Israel Film Festival at the JCC at the 11th hour. Festival promotional materials had already been distributed bearing UJA-Federation’s logo. Nevertheless, the federation’s name was pulled from the festival’s website.

Speaking on background, federation sources told the press that pressure from major donors had spurred the pullout. A statement issued then by UJA-Federation denied this, claiming incorrectly that “an Israeli political party” was also a cosponsor, preventing the philanthropy from participating without compromising its nonpartisan status. The federation sponsorship then involved no funds.

This year, JCCWatch, composed, according to press reports, of a handful of JCC members, has put forth a demand for the community center to establish “public and transparent guidelines that will distance it from organizations supporting BDS.”

In an official statement, the JCC countered that it “does not support BDS, and we do not partner with organizations that support BDS. We stand with Israel against de-legitimization and support open and respectful dialogue within our community.”

The debate, said Stephen Hazan Arnoff, executive director of New York’s 14th Street Y, a community center not targeted by protesters, reflects similar trends in Israel, where tolerance of dissenting views is in decline. Attacks on JCCs and Jewish cultural institutions, he said, “are a sign of weakness” of the community. “If the community cannot accommodate diversity, the community is not healthy.”

JCCs Are a New Front in the Culture War on Israel